Share on Facebook
Share on Twitter
Share via Email
Share on Whatsapp
Share on Tumblr
Share on LinkedIn
Share on Google Plus
Share on Pinterest
By Sam Stites |
Published May 9, 2017
When Dr. Adie Poe looks at a cannabis plant, she doesn’t see what most people see. What she sees are hundreds of bioactive molecules with the potential to create infinite experiences in the human body.
A global leader in opioid and cannabis research, Dr. Poe has studied the neuroscience of opioid/cannabinoid interactions for more than a decade, beginning with her undergraduate and graduate studies at Washington State University in both Pullman and Vancouver. Her work is consistently funded by the National Institute on Drug Abuse and has received numerous awards in search of treatments for debilitating diseases such as chronic pain.
She is the co-founder of the Portland-based cannabis research organization Habu Health, and a faculty member at Washington University in St. Louis. She is also working with legislatures on state and federal levels to push medicinal cannabis reform.

What sparked your initial interest in the relationship between cannabis and opioids?

I did a lot of my early adult years in the Pacific Northwest in Vancouver and Seattle, and I was completely struck by the rampant heroin abuse I saw. I had moved there from Arizona, and I was sort of naive to drug abuse in front of my own eyes. It was super compelling. I’ve always been taken by how powerful heroin is, how powerful opioids are in terms of how quickly they can get someone in their grips and how defenseless we are against the abusive power of drugs.
The interaction came about as a result of job shadowing a substance abuse counselor in Vancouver, British Columbia. It was very remarkable that even though all of his clients were abusing heroin — their drug of choice — 100 percent of them were also using cannabis because of its decriminalization in Vancouver. At the time I was working in laboratory that was focused on the mechanisms of morphine tolerance. Tolerance is an issue because of its pain relieving properties. We don’t want a pain relieving drug to lose it’s ability to relieve pain with repeated use, so understanding morphine tolerance to find a way around it [is important to] continue to have effective pain therapy over time.
I was seeing all these people who were abusing heroin but also using cannabinoids/cannabis thinking both of these drugs relieve pain. I thought, what’s going on here? What is the interaction? What’s happening inside the brain? That’s really where it started, when I was an undergraduate just by taking a look around me in conjunction with the laboratory environment I was being supported in.

How would you characterize the goal of your research?

The end goal and the hypothesis has always been, how can we effectively use cannabis in conjunction with opioids in order to maximize the beneficial effects of opioids, and minimize the negative side effects. That's always been the basis of my work, whether it's reducing tolerance, eliminating dose escalation — that's where people continue to take higher doses over time leading to misuse, abuse and eventually overdose. That's really the central hypothesis, that by using these things in conjunction, you can actually get better pain relief, not have this dose escalation and not develop all of this dependence and propensity for abuse and overdose. That's the ultimate goal, to keep people alive.

How do you know there's a positive effect of cannabinoids on opioid users?

We know by looking at states that have passed medicinal cannabis laws. When they instate those laws, there is, on average, a 25 percent drop in opioid overdoses. Clearly there’s some sort of beneficial effect of cannabis. It’s literally keeping people alive. My hypothesis is it is because of this prevention in dose escalation, people have their pain reliving needs met by cannabis, and therefore they don’t need to turn to opioids.

What are some contributing factors to this opioid epidemic?

Obviously opioids are pain relievers. The vast majority of pain relievers, opioids, are prescribed by a family care physician — your neighborhood doctor — because that’s who a vast majority of people go to when they have something wrong. Pain is an incredibly ubiquitous experience. Every man, woman and child on this planet is going to experience severe or chronic pain at some point in their life. In fact, right now anywhere between 30 and 40 percent of this country, at this very moment, is experiencing pain. The easiest solution we have at the moment, is to write a prescription. Family doctors are pressed for time. They have on average 13 minutes with each patient. There’s just not enough time and not enough education on the family physician’s part to devote to accurately and sustainably treating that pain. Doctors only get about 10 hours of training on pain relief and pain management. Veterinarians in this country get 50 hours of pain training. There’s this severe problem where doctors just don’t know how to deal with pain, so they write a prescription. They don’t have the time to do anything else. That’s at least one contributor to this huge epidemic we have.

Why hasn't the emergence of medicinal cannabis to fight opioid addiction been stronger? What's the roadblock?

The simplest answer to that question is schedule one. The main reason doctors aren’t able to prescribe, rather than just recommend medical cannabis, is because they will lose their DEA license if they’re involved in their patient’s consumption of a schedule one controlled substance. The same reason pharmacists or any trained health professional are putting their job on the line if they’re willing to engage with their patients on treating ailments with cannabis. We can’t get any money from the federal government to do any of the studies we need.

Right now, medicinal cannabis use in humans is sort of the largest experiment in all of human history, and nobody has been systematically studying it on a large level. That is what Habu Health intends to do, to apply all of my scientifically rigorous training to the cannabis experience in order to, on a large scale, conduct these retrospective human studies.

The Food and Drug Administration needs randomized, double blind, placebo controlled clinical trials, in humans, in order to really say, yes, cannabis is safe and effective for x, y and z ailments. But in order to conduct those studies you need money. The vast majority of biomedical research comes from the National Institute for Health (NIH). The NIH is incapable of giving anyone money to do those kinds of things, so that’s why we have this huge catch 22 and negative bias in the scientific literature because everyone wants more data, but you can’t get that data because it’s schedule one.

Fortunately, the National Institute on Drug Abuse (NIDA) has always been interested in my work. As of today, and for all of U.S. History, the means by which you can study cannabis and cannabinoids is by taking this drug abuse angle. That's why we have a lot of data that shows a lot of the deleterious of cannabis and negative things that happen, you know, such as chronic use in adolescents causes ailments x, y and z in adulthood. That's why we have that data because of NIDA. 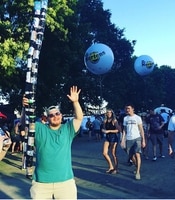 Sam Stites is a Portland-based journalist covering news, art and culture in the Pacific Northwest. He enjoys ice cold Rainier, a strong sativa and scenic views, particularly when the three are combined.