Ellen Lesperance stole the show with her paintings and textiles paying tribute to direct action campaigns and feminist activism at the 2014 Biennial of Contemporary Art at North Portland's Disjecta gallery. This is her second solo show, and it responds to the radical, intimate paintings of nude males by feminist painter Sylvia Sleigh (1916-2010). Lesperance's photography riffs on Sleigh's iconic Turkish Bath, her gouache-on-paper paintings reference Sleigh's 1978 A.I.R. Group Portrait, and her graphite drawings are inspired by texts from Sleigh's archive. Side by side, the two artists from different generations will provide a fascinating portrait of two women grappling with the same set of issues. Adams and Ollman Gallery, 209 SW 9th Ave., 724-0684, adamsandollman.com. Through Oct. 10.

Portland artist Jessica Jackson Hutchins' assemblages of ceramics, newspapers and upholstery rose to prominence in 2010 with two simultaneous shows at New York City galleries and a piece in the Whitney Biennial. This month she has another double-booking with Confessions at the Lumber Room and the Cooley Gallery at Reed College. The show, organized by Lumber Room owner and collector Sarah Miller Meigs and Cooley Gallery curator and director Stephanie Snyder, is a self-conscious examination of the distinctions between collecting, curating and creating when private and academic art galleries collide. The Lumber Room, 419 NW 9th Ave.; the Cooley Gallery, 3203 SE Woodstock Blvd. Through Nov. 8.

Organized by Carnegie Mellon University and curated by Astria Suparak and Ceci Moss, Alien She examines the lasting impact of riot grrrl on artists today by focusing on seven people whose visual art is inspired by the feminist punk movement. Representing 20 years of projects across many artistic disciplines, the show includes works by Ginger Brooks Takahashi of Pittsburgh, Tammy Rae Carland of Oakland, Miranda July of Los Angeles, L.J. Roberts of Brooklyn, and Stephanie Syjuco of San Francisco. The works will be on display at two locations— the Museum of Contemporary Craft and the 511 Gallery at Pacific Northwest College of Art. Museum of Contemporary Craft, 724 NW Davis St.; 511 Gallery, 511 NW Broadway. Through Jan. 9.

Wapato Jail, the never-opened Multnomah County detention center in North Portland, is mainly inhabited by coyotes that burrow beneath the fenced perimeter. This anomaly is eerily captured in Demos: Wapato Correctional Facility, a multipart art project by Bay Area group ERNEST that's the culmination of its two-year artist residency at C3: Initiative. Demos includes video, publications, limited-edition prints and a documented roundtable led by a character acting as a coyote in hopes of stoking conversation related to general issues of incarceration and the role of art in social justice. C3: Initiative, 7326 N Chicago Ave. Sept. 18-Nov. 22.

Despite her national and international success, Julie Green, professor of art at Oregon State University, is getting her first solo show in a Portland gallery. She's best known for her ongoing series, The Last Supper, but in October she'll cover the walls of Upfor Gallery with more than 100 sheets of mulberry paper, each painted in sumi ink with thousands of sea shells. Green began the long drawing process in 2011 as a backdrop for a series of blue paintings, using a unique process of airbrushing egg tempera onto prepared panels. Influenced by Zen calligraphy, Japanese ceramics and the Pattern and Decoration movement, Green's work meditates on the ocean, consumption, the color blue and airbrushed imagery. Upfor Gallery, 929 NW Flanders St. Oct. 13-Nov. 25. 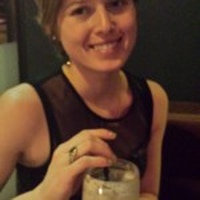 I grew up on the rural east end of Long Island. I have degrees in Art History and Sustainability Studies from Stony Brook University. Before moving to Portland I worked at the Metropolitan Opera, and now I spend my time between the visual and performing arts, and flying disc communities.