Share on Facebook
Share on Twitter
Share via Email
By Janelle Lassalle |
By Pete Cottell |
Published May 31, 2017
The slow, eastward creep of hipster Portland is pushing past 82nd. For proof of what’s happening, which until now has been a sprawl of chain spots and drive-thrus, look no further than two new vegan spots specializing in offers for the dewy after dawn.

Jet Black Coffee Company (11150 NE Weidler St., 503-889-0739, facebook.com/jetblackcoffeecompany) is an all-vegan coffee shop inspired by every punk rock-lifer’s least favorite Jawbreaker record. Aside from the bright and woodsy shop’s namesake, which is borrowed from a brooding middle track off the East Bay pop-punk legends’ 1995 swan song, “Dear You,” there’s a copy of the album proudly propped against the double-headed La Marzocco, as well as their in-house blend, Dear You, which owners Travis Coe and Karla Nolt dialed in with the help of Water Avenue Coffee.

For playing the role of canary in the coal mine, Jet Black's gambit is paying off handsomely. In spite of the Portland coffee scene's longstanding allergy to any small-batch roast one could construe as being on the dark side, the aforementioned Dear You Blend ($2.50 for a 12 ounce)  has a delicately smoky flavor up-front with a familiar tang in the finish that's distinctly the work of Water Ave. On account of being all vegan, the cappuccino selection ($3.50 for an 8 ounce; no traditional 5 ounce size was offered) was a mixed bag. Almond and coconut milk varieties yielded a smoother finish with much less separation between the foam and the espresso, while the hemp and soy were a tad overcooked and heavy on the big, sloppy bubbles that leave an undesirable blob floating on top.

We loved the blueberry danish ($4) from Sweet Pea, which was smooth and sugary on top with a flaky and tender crust that defied logic of being completely butter-free. The tempeh "bacon" and scallion cream cheese croissant ($2) was salty and tender and easily able to get away with being twice the size, but the price was right for a quick, on-the-go savory snack you'd expect from a proper coffee shop. Skip the cinnamon roll from Shoofly ($4), which was dry and dearly suffering of not having a proper substitute for the rich buttery finish of a regular cinnamon roll.

The overall aesthetic of the shop is heavy on unfinished wood and succulents, giving it a very Austin-meets-Etsy chic. This dovetails perfectly with the non-caffeinated beverage selection, which includes four flavors of La Croix and bottles of Topo Chico (all $1). The outside patio is one of the best in the neighborhood, and is likely to be at capacity from now until November. The ambience of the drag of Weidler Jet Black sits on is still a bit too traffic-y to feel charming, but that’s how it’s gonna be in these parts for the foreseeable future. Either way, getting pushed out of Portland proper is getting more and more bearable thanks to the efforts of owners like Coe and Nolt. PETE COTTELL.
Hard to believe, but Doe Donuts (Doe Donuts, 8201 SE Powell Blvd., 503-333-4404, doedonuts.com) is the city’s first vegan donut shop. Located on the corner of Powell and 82nd, the shop’s early May debut was met with the sale of 1,000 donuts in a mere four hours. And while Voodoo might have a few vegan options lurking up their sleeve, they’ve got nothing on Doe’s thoughtful, well-balanced creations like “The Oregon Trail” (pecans, kettle chips, strawberries and chocolate chips) and the strawberry-milk flavored namesake, “Doe!”

The love child of dynamic baking duo Carly Sitner and Crystal Wegener, Doe Donuts took shape when the two worked together at an organic grocer.

“My partner and I started making donuts at our last job, and it just became a hit,” says Sitner. “We thought, ‘Well there’s no vegan donut shop in Portland, and there’s one in every other major city, so let’s do it before someone else does.’”
Two years of word-of-mouth sales and one successful Kickstarter later, and that dream has finally become a reality. The shop itself is a former Pizza Hut, a small space complete with a giant, leering doe and a wooden donut case housing two racks of donuts laid out on cooling sheets.
“We were looking for a second-generation spot, a spot that had already been a restaurant in this neighborhood. It took about six months to just find anything that was open,” Sitner adds. “When this was open it used to be a Pizza Hut for 30 years and it did not look anything like this…it was rather terrible. So we just jumped on it.”
Pricing ranges between $2.75 and $4 per donut, and ingredients are locally sourced, non-GMO and organic. There are six core flavors on the menu at any given point, and a few seasonal creations that rotate out, with fall flavors beginning in September.
Doe’s signature donut, dubbed “The Golden Child,” proclaims to be the only chocolate raised donut in the city. It’s a chocoholic’s wet dream come true complete with chocolate chips, shavings, ganache and golden pearls, and it is sold out for the second day in a row. I console myself with a bite of the “All or Nothing,” a donut filled with cookie butter and topped with ganache and cookie dough. The donut itself is springy and aerated, achieving a texture that’s a mix between a more traditional cake dough and bread, and far less sugary than your standard donut.
It’s a decadent (albeit thrilling) bite compared to the vanilla bean donut whose warm, spiced vanilla flavor is more than just another sugar bomb waiting to go off. The Thai Tea flavor doesn’t taste like iced tea, but instead tastes of nutty, faintly toasted coconut, and has a crunchier, more satisfying dough than the rest of the donuts.
If no one told you these were vegan, you’d never be able to tell.
“We’re just trying to create a really high-quality product,” Sitner says. “You notice you won’t see the word ‘vegan’ anywhere?…It shouldn’t matter, should it? The vegans already know, so I don’t have to tell them. We just want to make a good donut.” JANELLE ALBUKHARI. 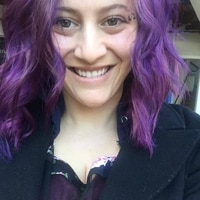 Janelle Lassalle is a writer based in Portland, OR that specializes in food and all things culture. She's not afraid to do whatever it takes to get a good story, and can often be found eyeballing pastries outside shop windows.