You’re not wrong: The lines for hazelnut ice cream really are getting longer each year.

Portland is attracting tourists in record numbers. In 2018, visitor spending in the Portland metro area hit an all-time high: $5.3 billion, a 47 percent increase from 2010. That’s a significant boon to the local economy. Travel Portland estimates the hospitality industry employs 36,360 workers, and as WW reported last year, the city is in the midst of a hotel construction spree (“Local’s Guide to Luxury Hotels,” Aug. 29, 2018).

But popularity can be overwhelming. In record numbers, visitors are coming to Portland to hog our trails, smoke our weed and drink our beer.

This week—with the Rose Festival jamming the waterfront with celebrants—WW sent a photographer and several reporters to spend a week among the tourists. So we rode in a helicopter and boarded two weed buses and braved Multnomah Falls on a Saturday. We even hopped on the BrewCycle. Along the way, we examined the scofflaw companies taking advantage of the demand while evading city regulators and asked hotel concierge desks what tourists really want.

We wanted to see this city from the perspective of people who view it as a vacation destination. Turns out, it’s a nice place to visit. 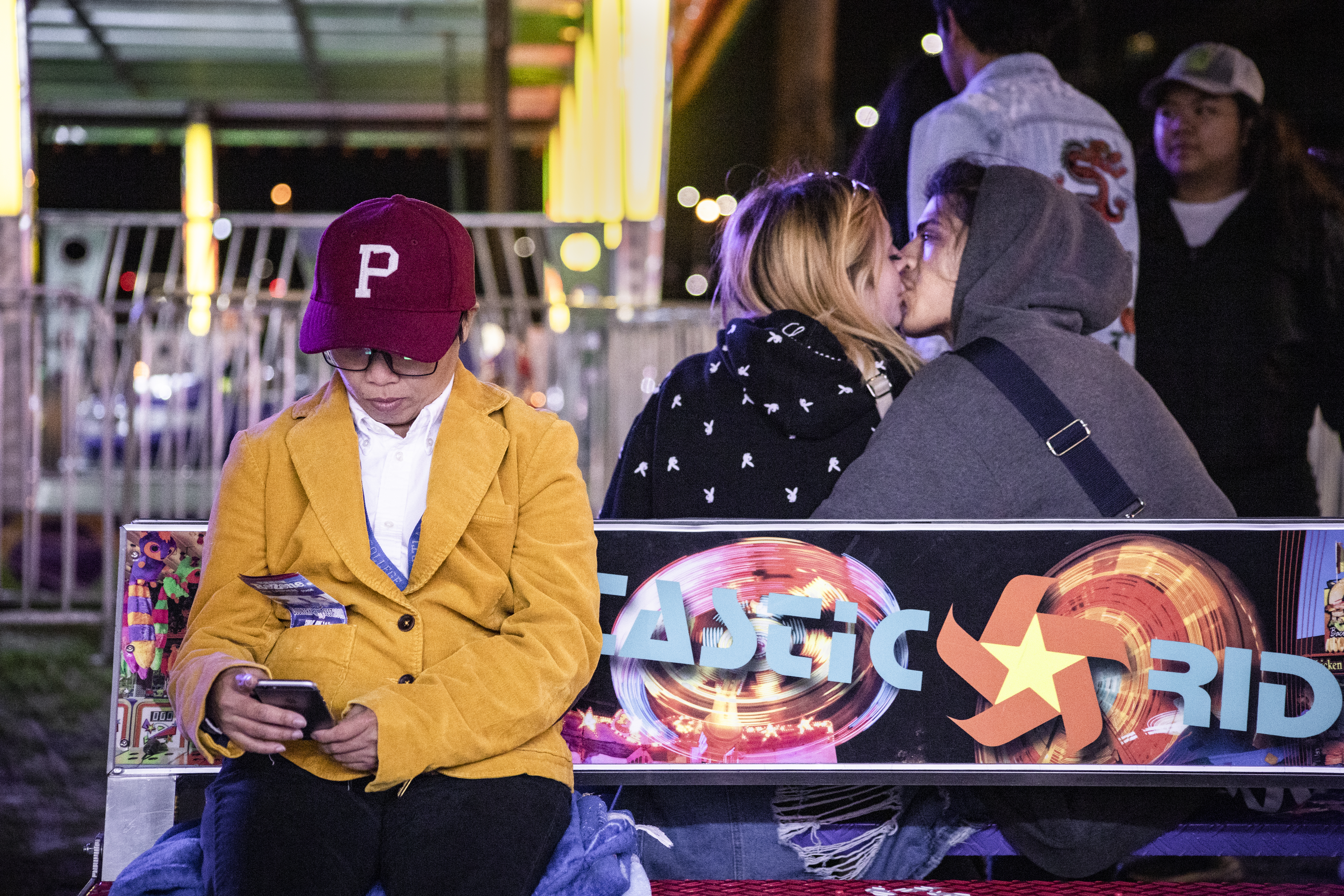 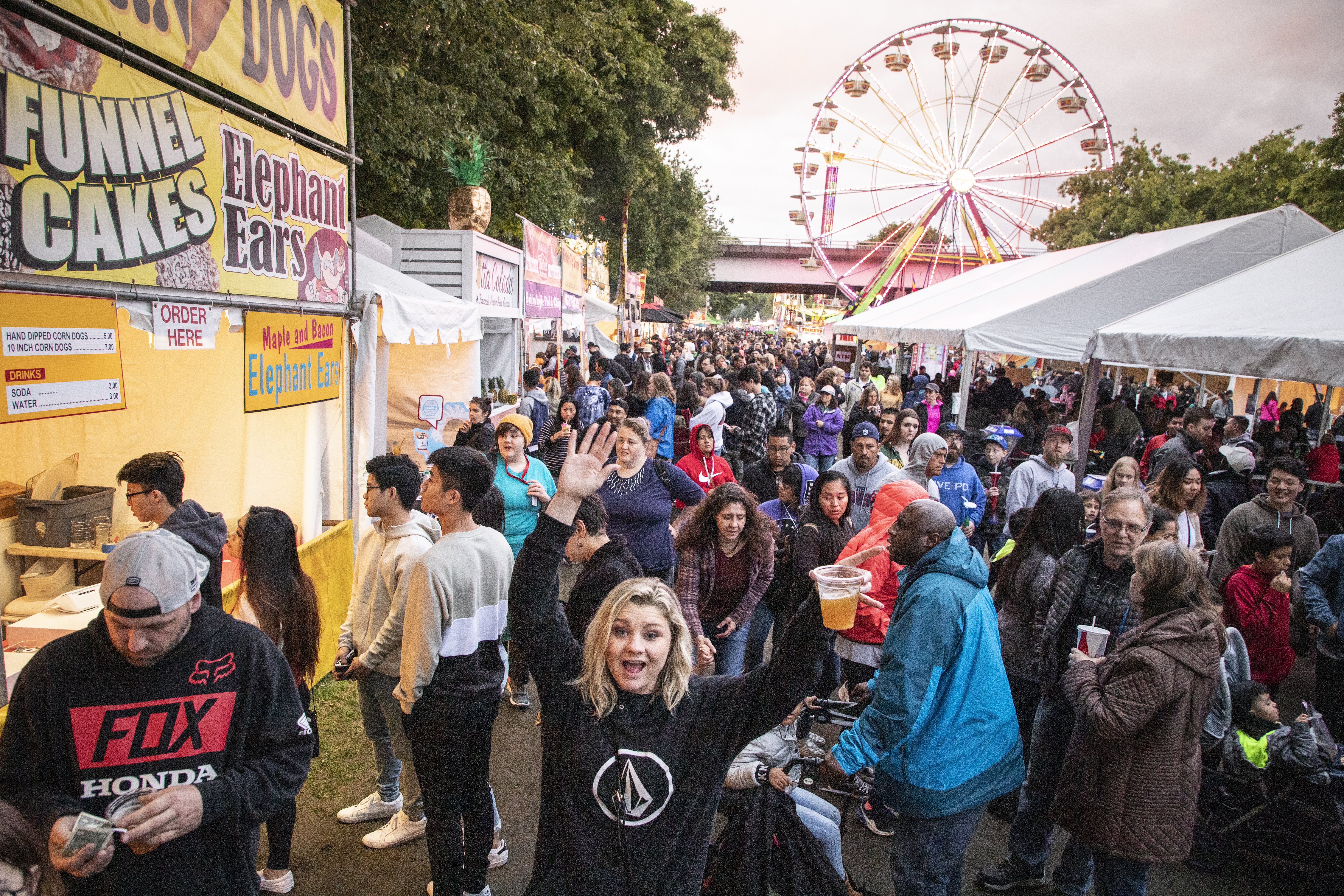 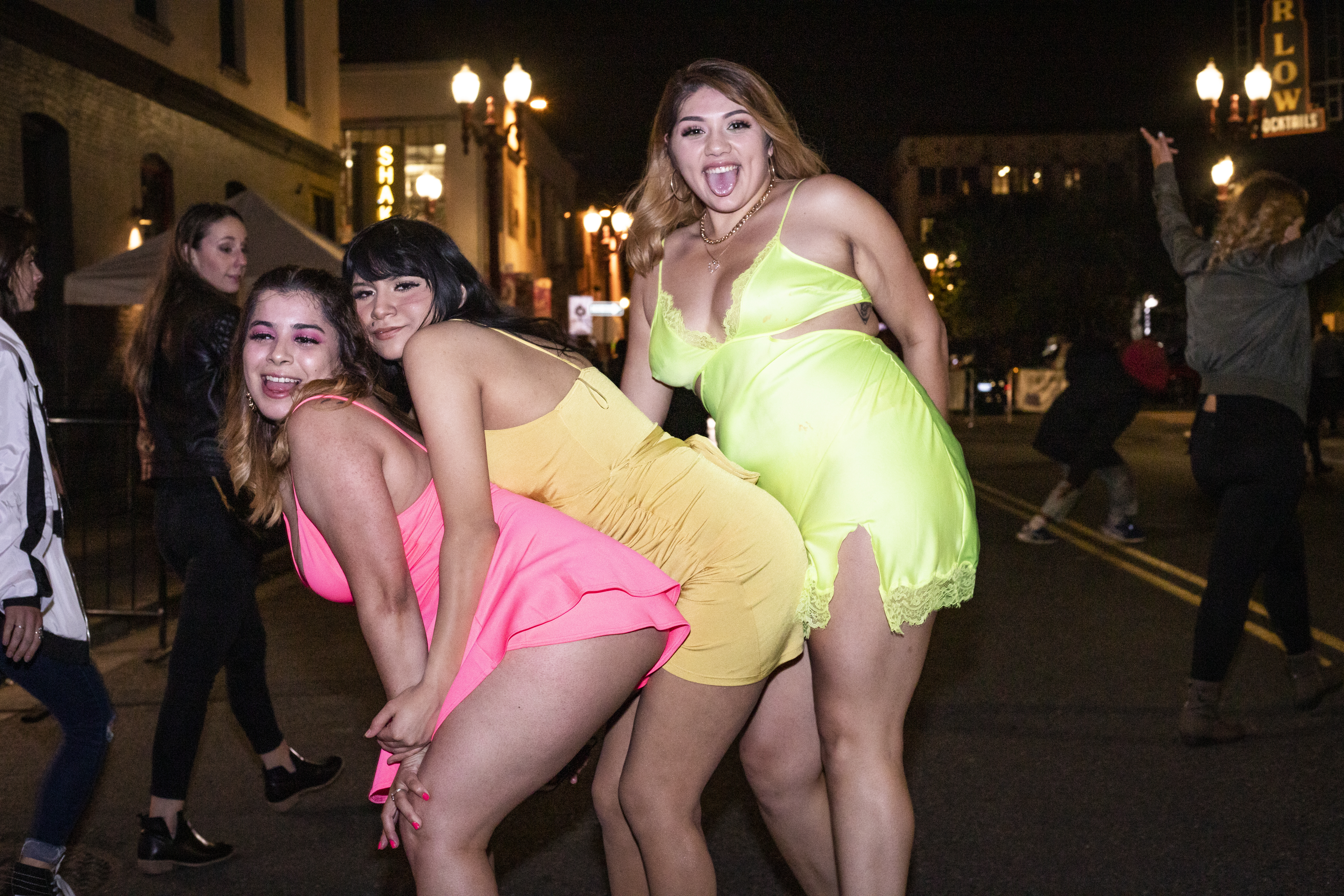 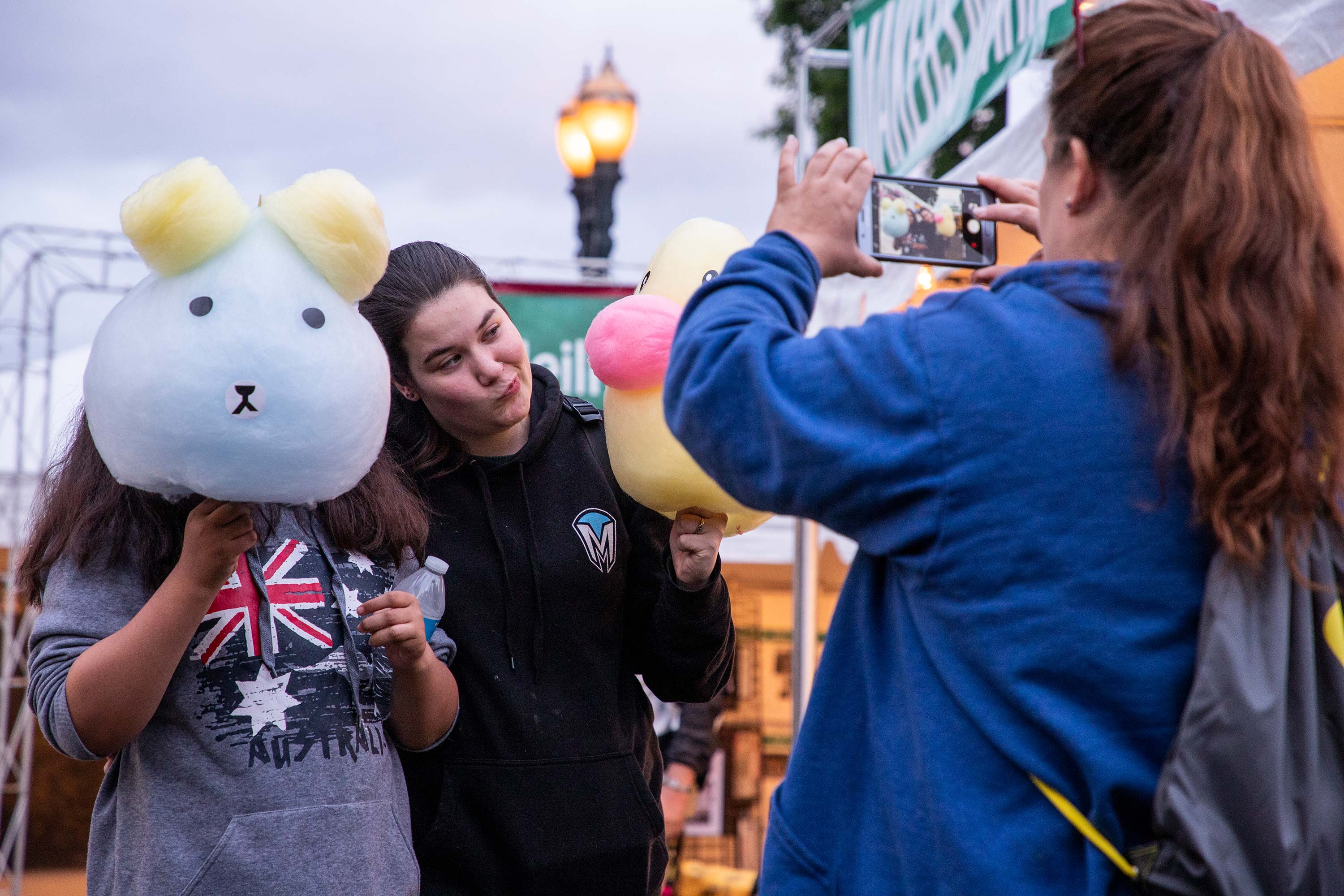 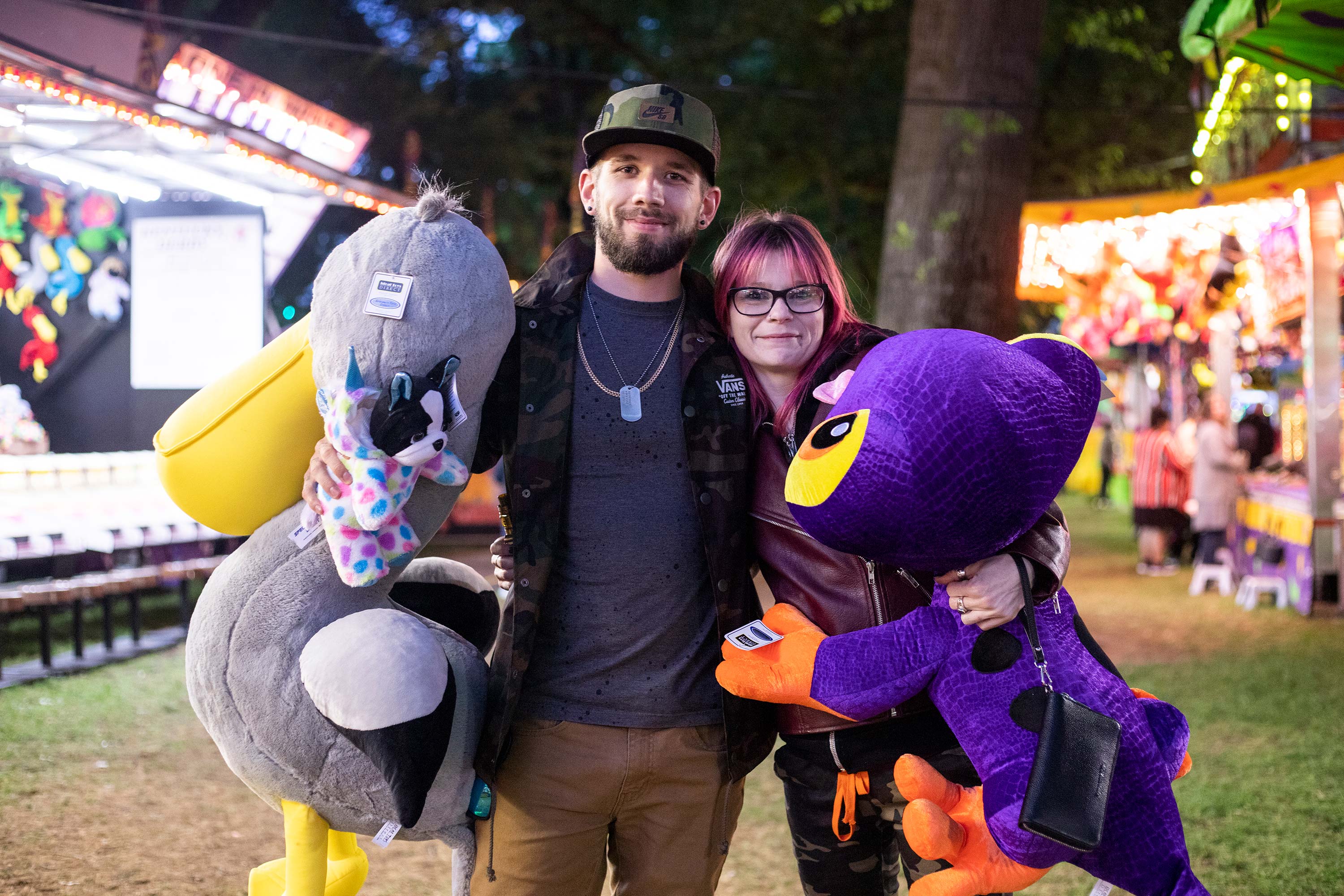 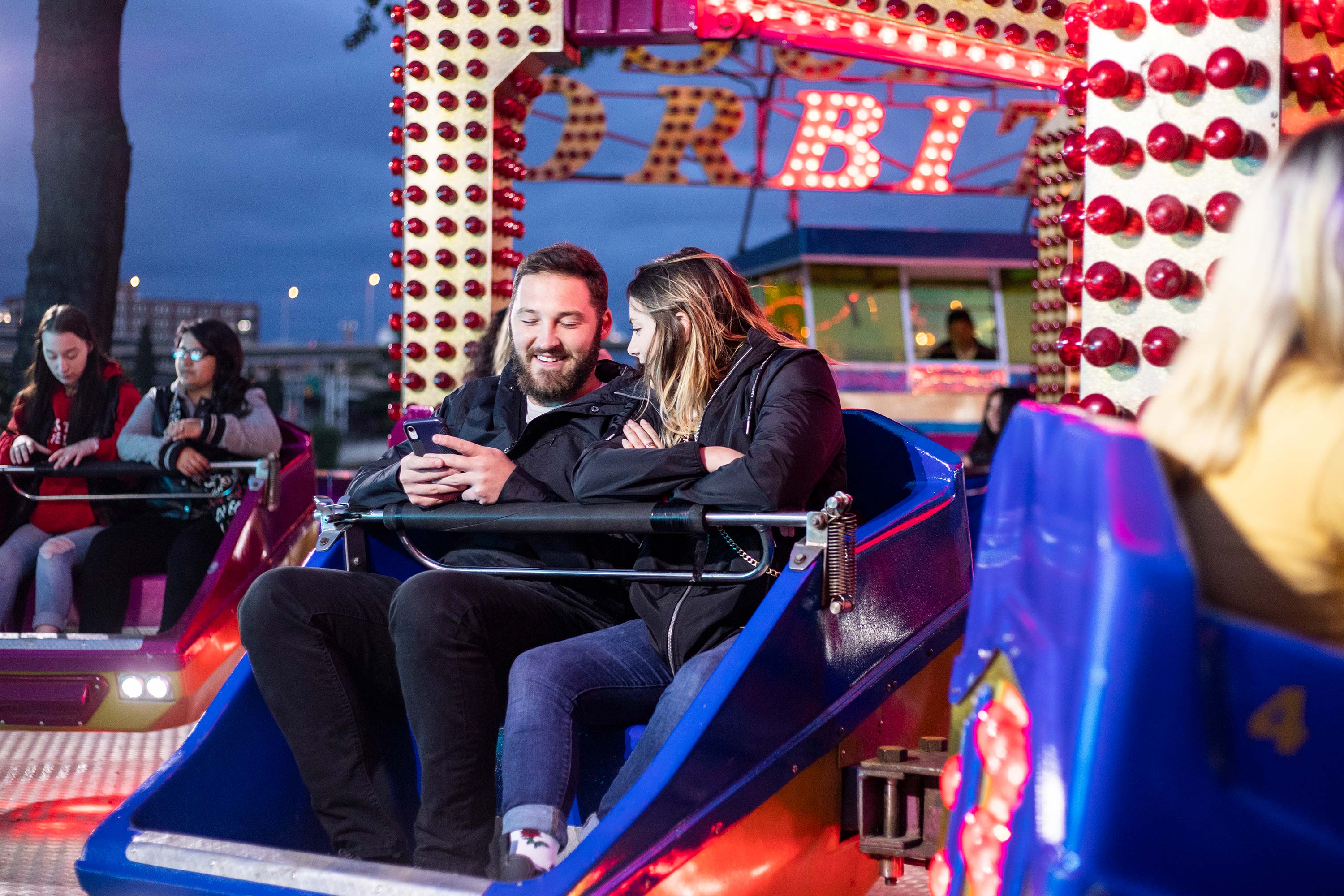 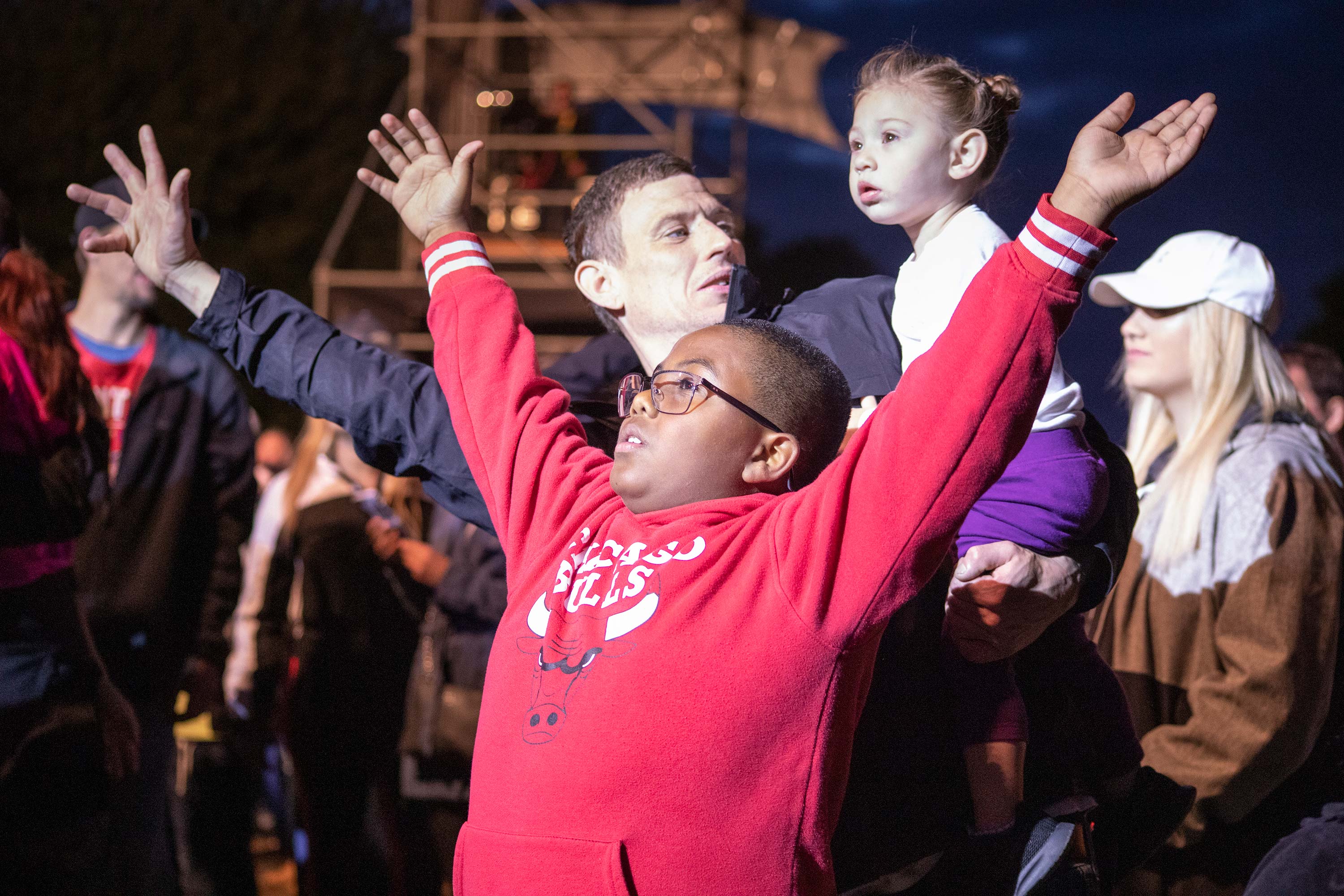 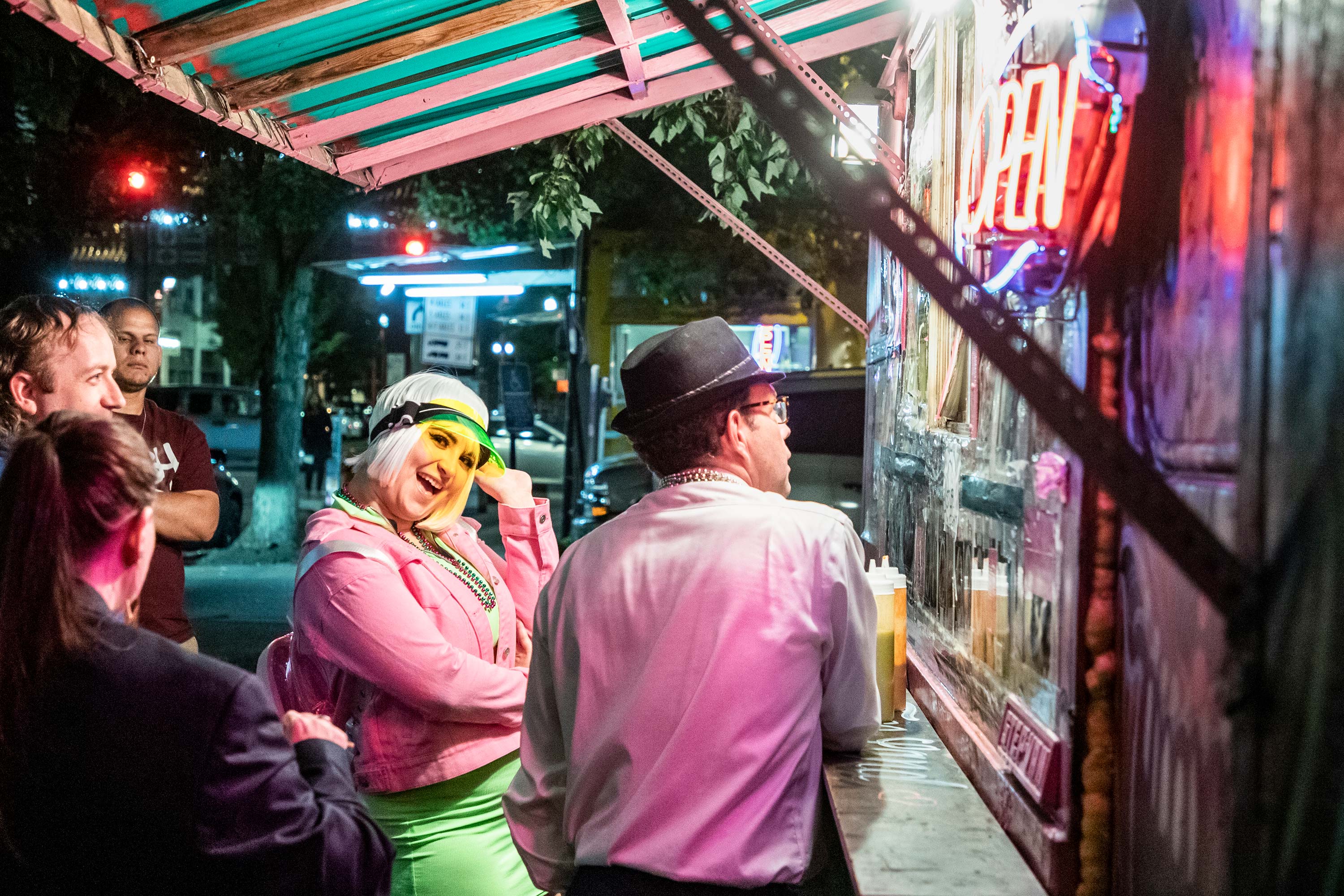 Where Young People Go to Vacation

This is one of the most crowded weeks in downtown Portland, thanks to the throngs of tourists jamming the waterfront and Old Town during the Rose Festival. Most of them are your fellow Oregonians. Data compiled by the travel market research firm Longwoods International gives a snapshot of who visits Portland. However much national attention Portlandia has brought, the vast majority of visitors hail from Oregon and Washington. And this is no Branson, Mo.—most of the tourists are under the age of 44. Perhaps the most striking finding: Tourists visiting Portland are even more likely to be white than the locals. (Portland is 70 percent white; visitors are 83 percent white.)

Hernandez was 11 years old on Sept. 29, 2012, when she boarded a party bus chartered to take her to a quinceañera. As the bus turned a corner in downtown Portland, Hernandez fell out of a window and suffered a fatal injury.

Her death drew scrutiny of the company operating the party bus without the required city permit. Portland Bureau of Transportation officials said the company, Five Star Limousines, was part of a larger danger: unsanctioned nightclubs on wheels.

“They really look very much like a dance floor in Las Vegas,” John Case, a member of the city review committee for private for-hire transportation companies, told The Oregonian at the time. “Everybody is absolutely outraged.”

Nearly seven years later, little has changed—except a lot more vehicles now ferry tourists around the city. Party buses have been joined by weed vans, wine shuttles and even helicopters.

Many of these companies flout city rules. WW counted at least 25 companies currently advertising tour pickups in Portland that do not have the required permits. That’s far more than the 16 tour companies listed as permitted by the city’s private for-hire transportation program. The compliance rate appears similarly modest for party buses and limousines.

City regulators say that’s despite an aggressive effort to police scofflaws. “People don’t often notify regulators or enforcement staff to say they are going to break the law,” says PBOT spokesman Dylan Rivera, “which is why we take a proactive approach, in addition to responding to complaints.”

“When I pull up at the Nines [hotel],” says Jeff Davies, owner of Portland’s Ecotours of Oregon, “I’d like a PBOT person every once in a while to say, ‘Would you mind showing us your permit?’”

“Outside of Portland, permits are not required, so many companies are just not aware that they need a permit to pick up passengers inside city limits,” he says. “Most tour companies conduct tours outside of the city, and the actual vehicle is in the city for a very short period.”

Party buses and tour vans are classified differently by PBOT, but they face a similar permitting process. If a vehicle carries more than 14 passengers or weighs more than 2,600 pounds, it needs a state permit, as well as city licenses. Companies with smaller vehicles need a $500 city permit and a $250 permit for each vehicle. The vehicles can’t be more than 10 years old, and they must be inspected by a certified mechanic. The company has to carry $1 million of liability insurance.

These rules apply to any company that picks up passengers in Portland. But they don’t apply to companies that only drop people off in Portland—a party bus could legally pick up customers, take them to Portland strip clubs for a bachelor party, then drop them back off in the ’burbs—and surrounding cities don’t have any rules to break.

In 2012, the year Hernandez died, the Portland City Council toughened the rules requiring party buses to get city permits, so that repeat offenders would face criminal charges. Rivera says PBOT hasn’t yet taken that step.

“We have not prosecuted,” he says. “Violators typically halt operations after we have warned and fined them.”

It’s unclear what effect greater scrutiny by PBOT of tour providers would have.

Five Star Limousines, the company operating the bus that ran over Angie Hernandez, went quiet shortly after her death. In 2014, the Portland Tribune reported its fleet had been sold to another company—which was then targeted by PBOT for breaking city rules.

Bizarrely, a company using the same name—Five Star Limousines—now advertises party buses for rent in Portland. (Public records suggest it has different owners.) The company has no city permit. A man reached at the company’s phone number declined to discuss city permits. “It’s really nobody’s concern, without a formal letter,” he said, and wouldn’t give his full name.

“When we say ‘party bus’ we really emphasize party,” Five Stars’ website says. “All of the chauffeurs are licensed and knowledgeable of the area so that your only worry is to have a good time.” 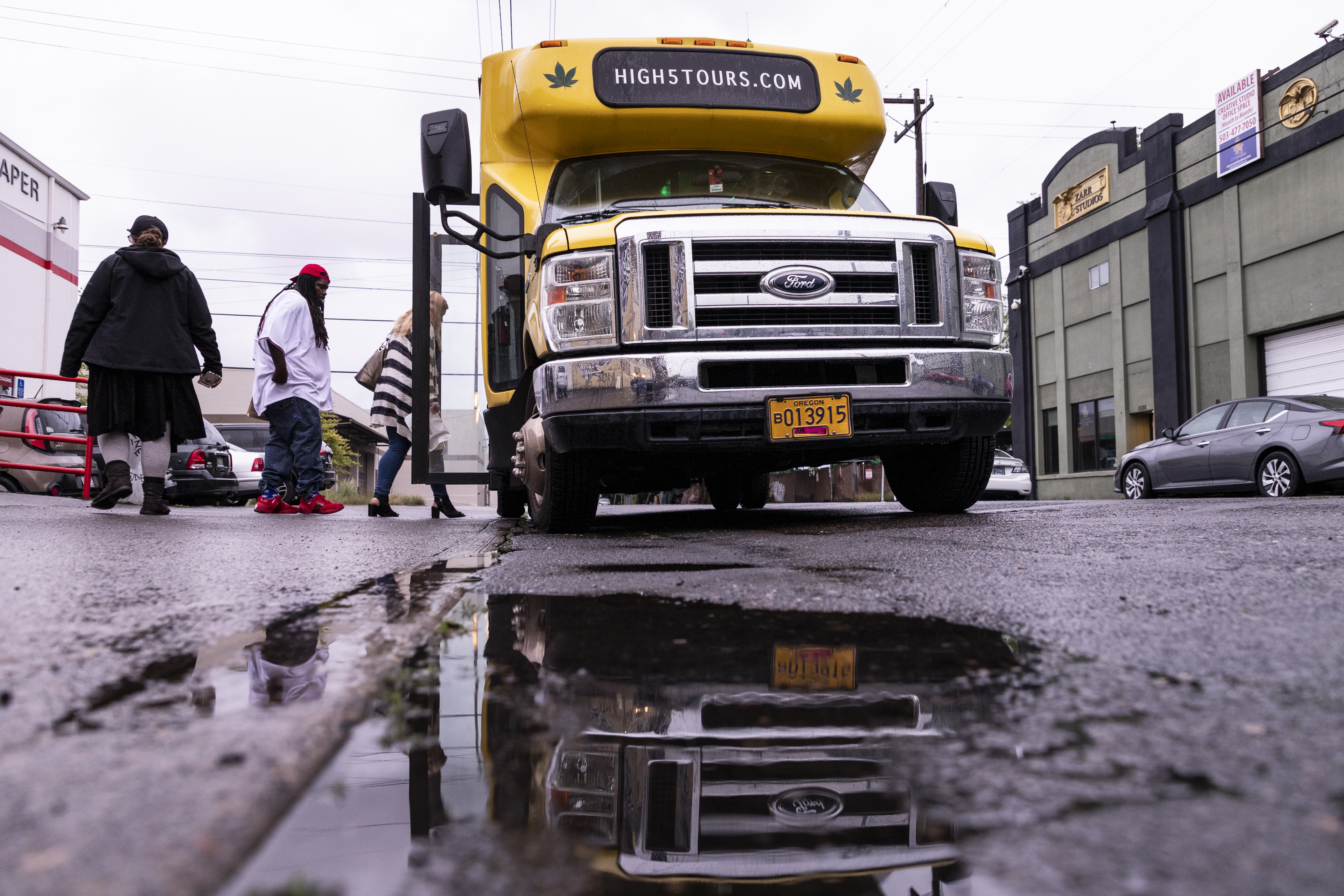 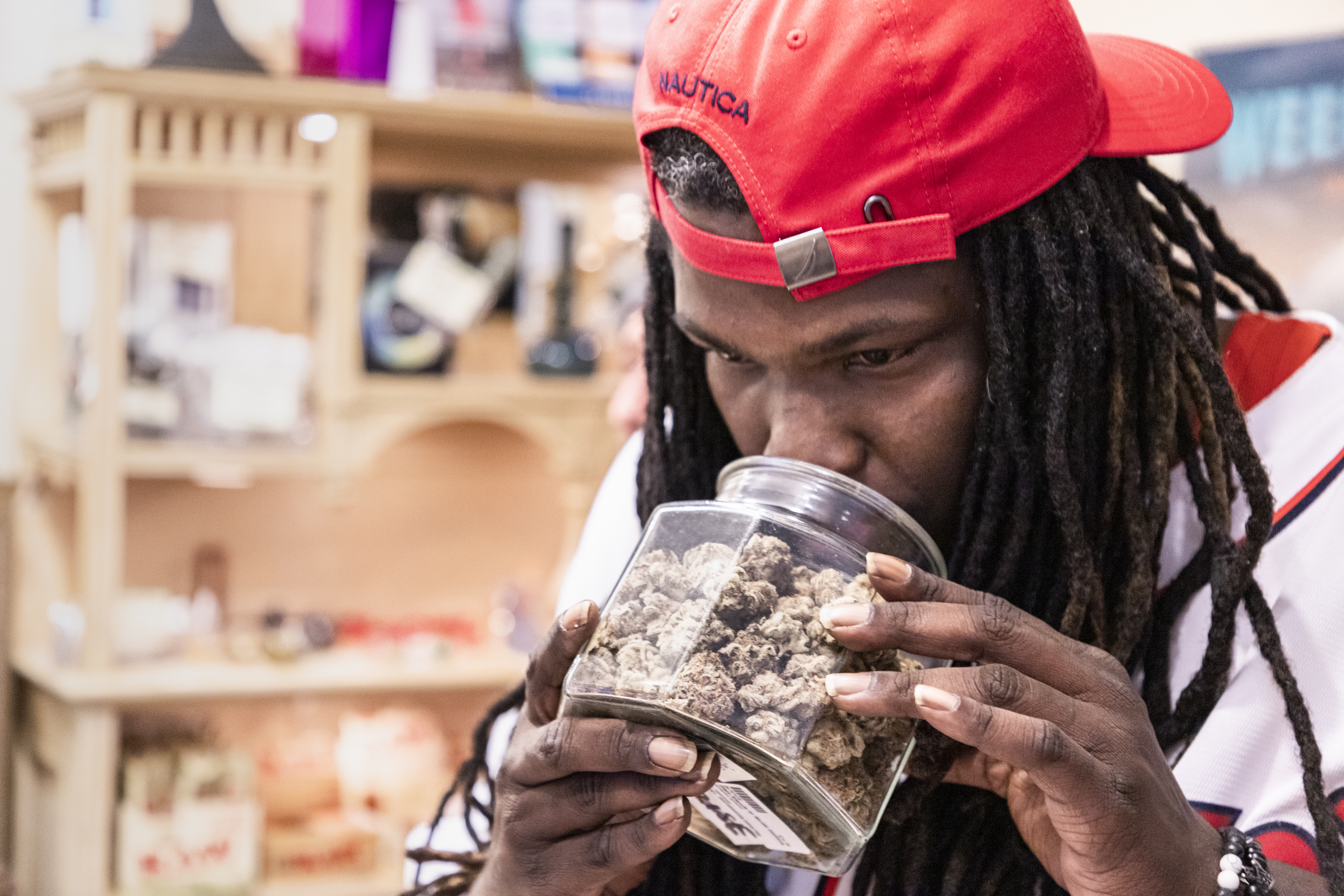 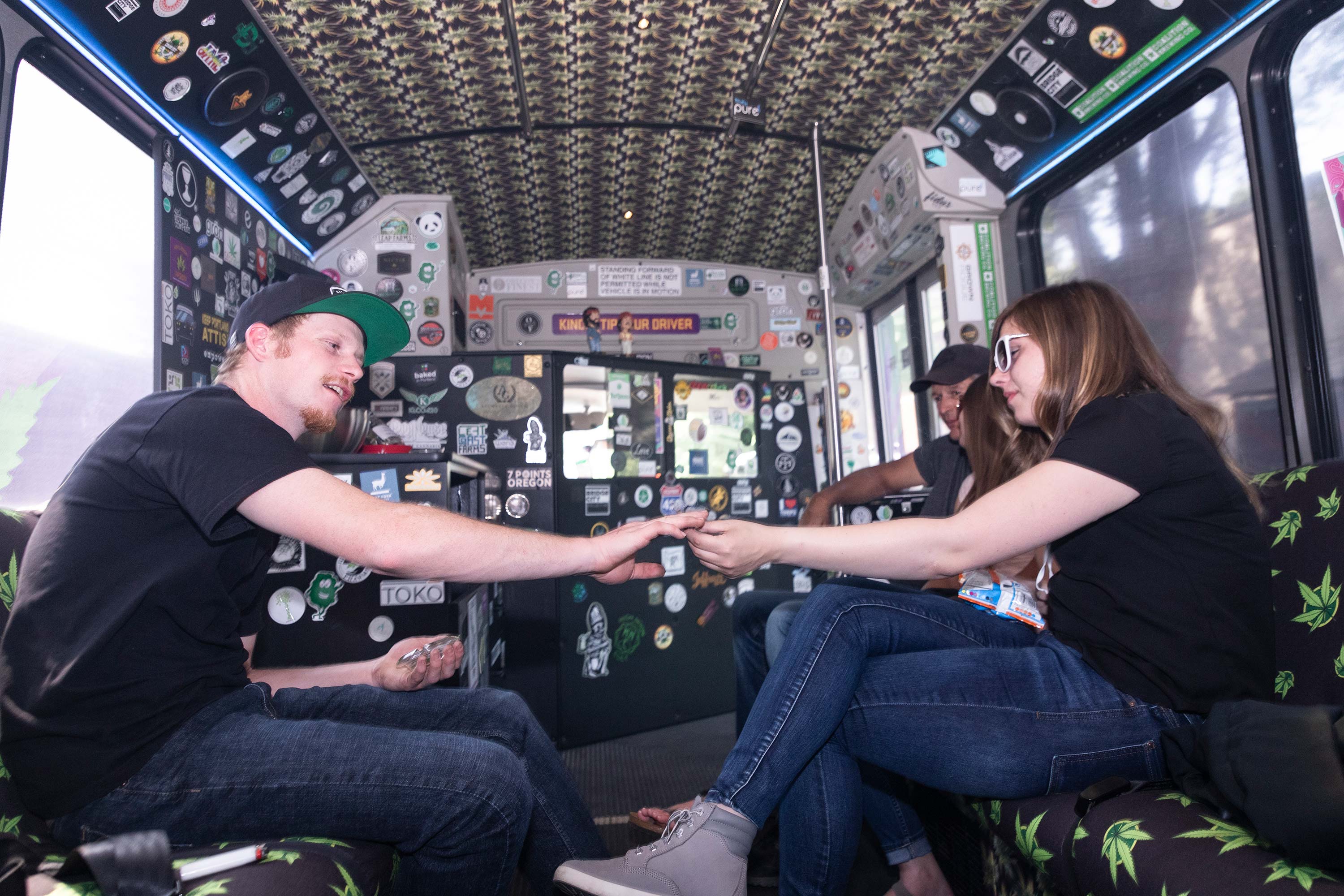 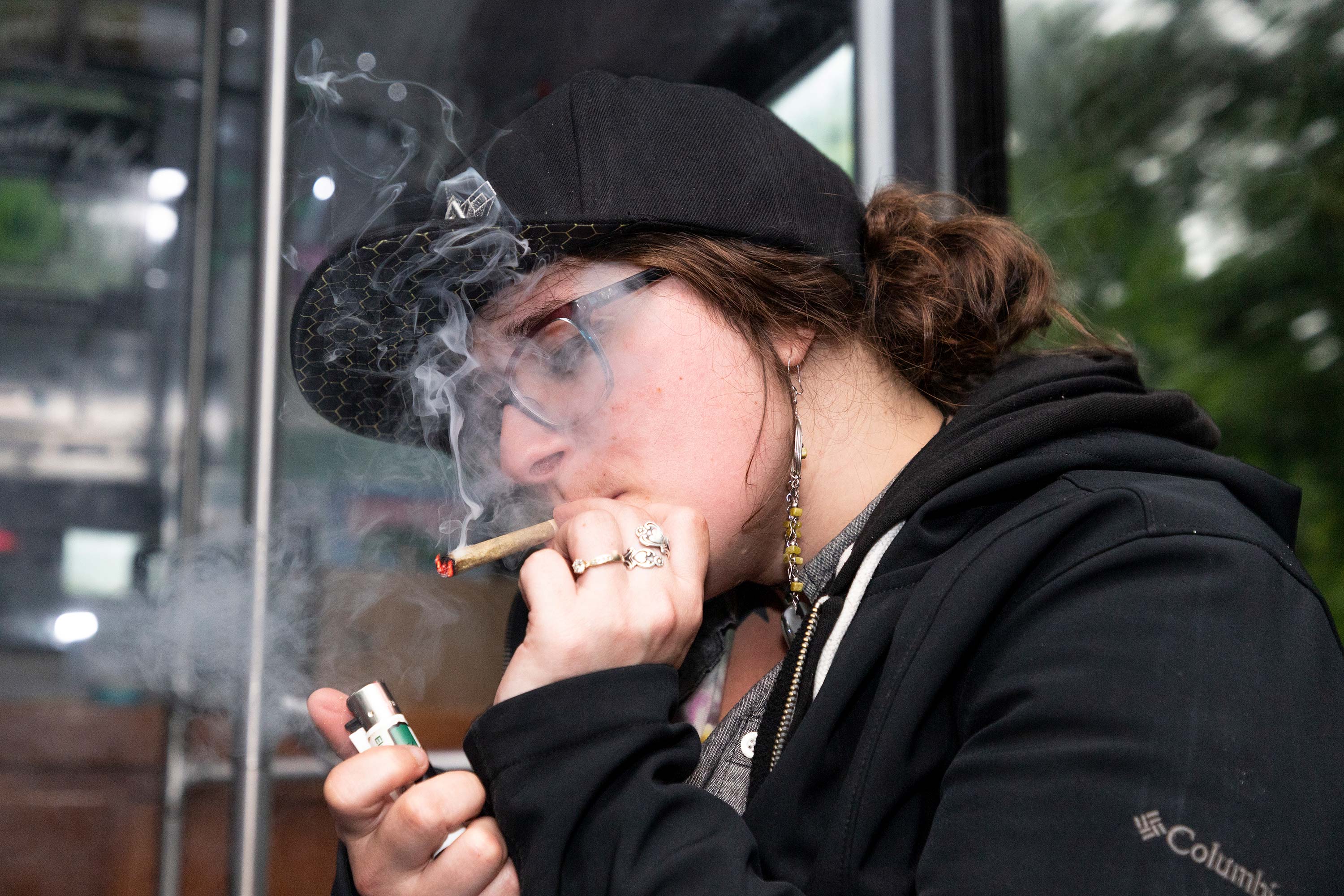 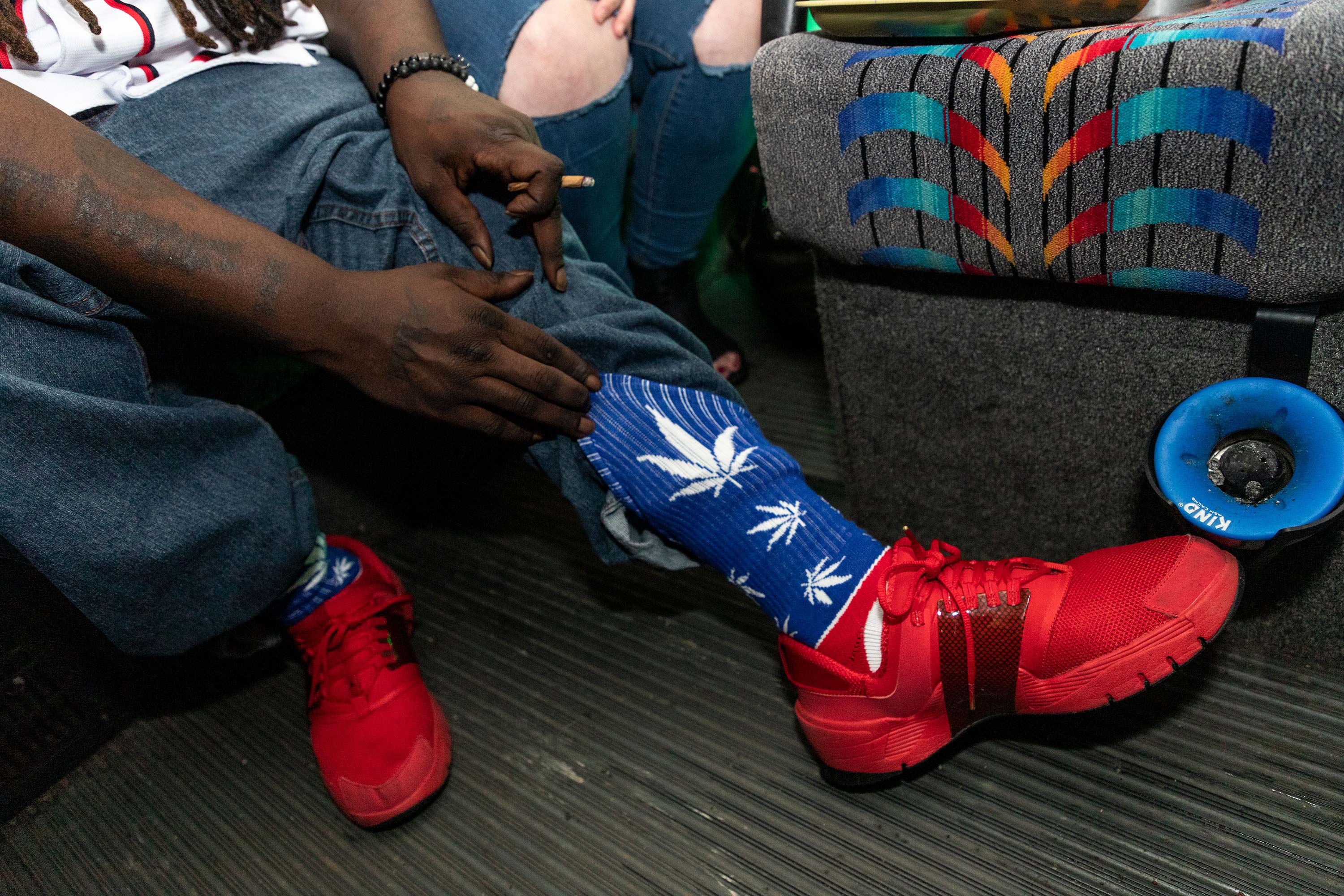 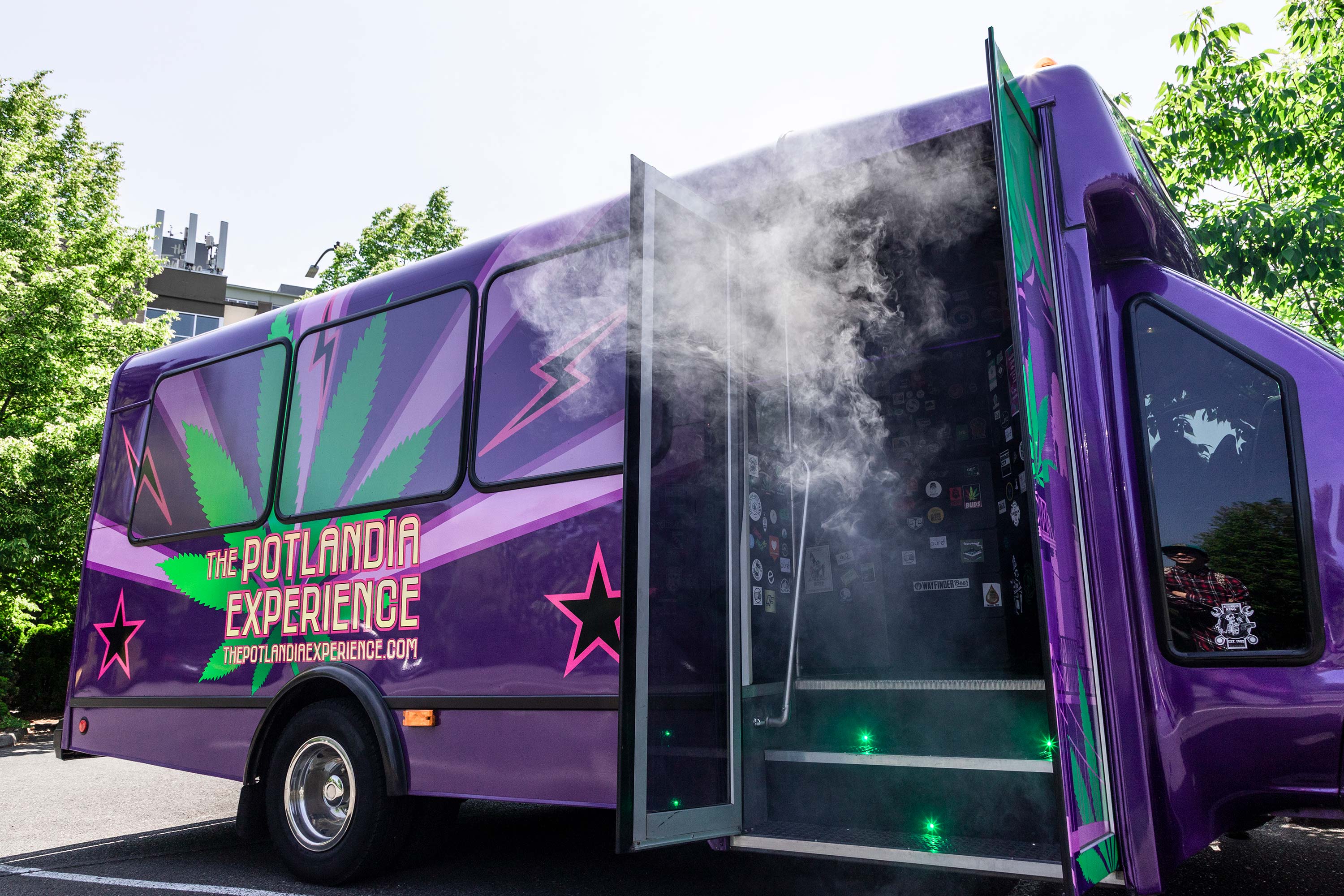 Lou takes a deep drag from his spliff before passing it to his girlfriend, Chinelle, seated next to him on the Potlandia tour bus. Dr. Dre and Eminem’s “Forgot About Dre” play over the speakers. Neon lights reflect off cannabis-themed wallpaper through a veil of smoke. “It was both our birthdays yesterday and we just wanted to celebrate,” Lou explains. Cannabis tourism is an increasingly large portion of Portland’s hospitality industry: 11 percent of visitors said in 2017 it was a reason they came to this city, just two years after the category didn’t exist on official surveys. Two competing tour companies, High 5 and Potlandia, now provide three-hour tours of several dispensaries, with the buses themselves serving as mobile smoking lounges. (The High 5 bus is a former airport shuttle and has obtained the required city permits.) On both tours, the last stop is a food cart pod. As the Potlandia bus pulls out of Burnside Skatepark, Marcus of Walla Walla, Wash., takes a few tokes before parting ways. “It was a long drive down here,” he says, “but this stuff helps.” 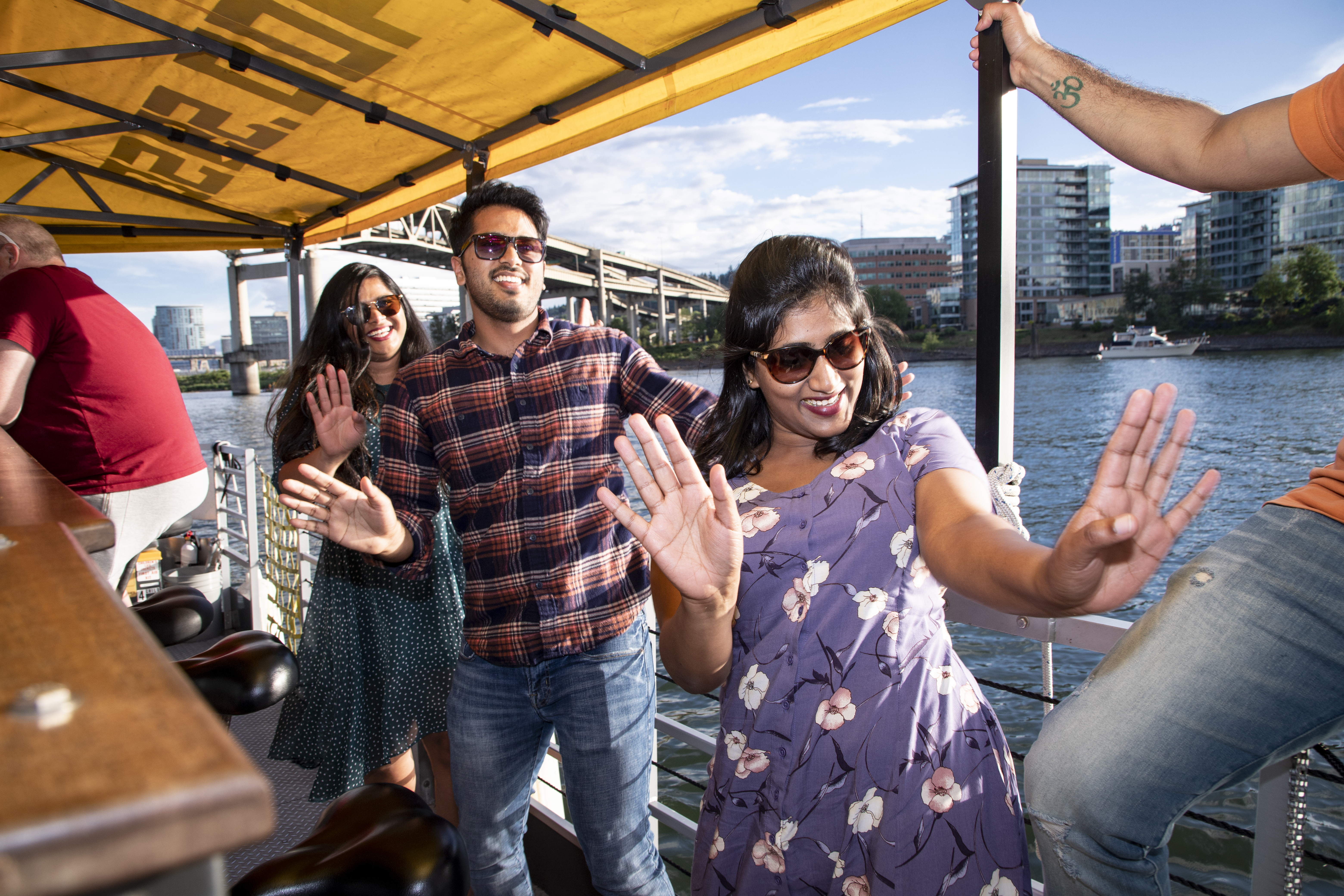 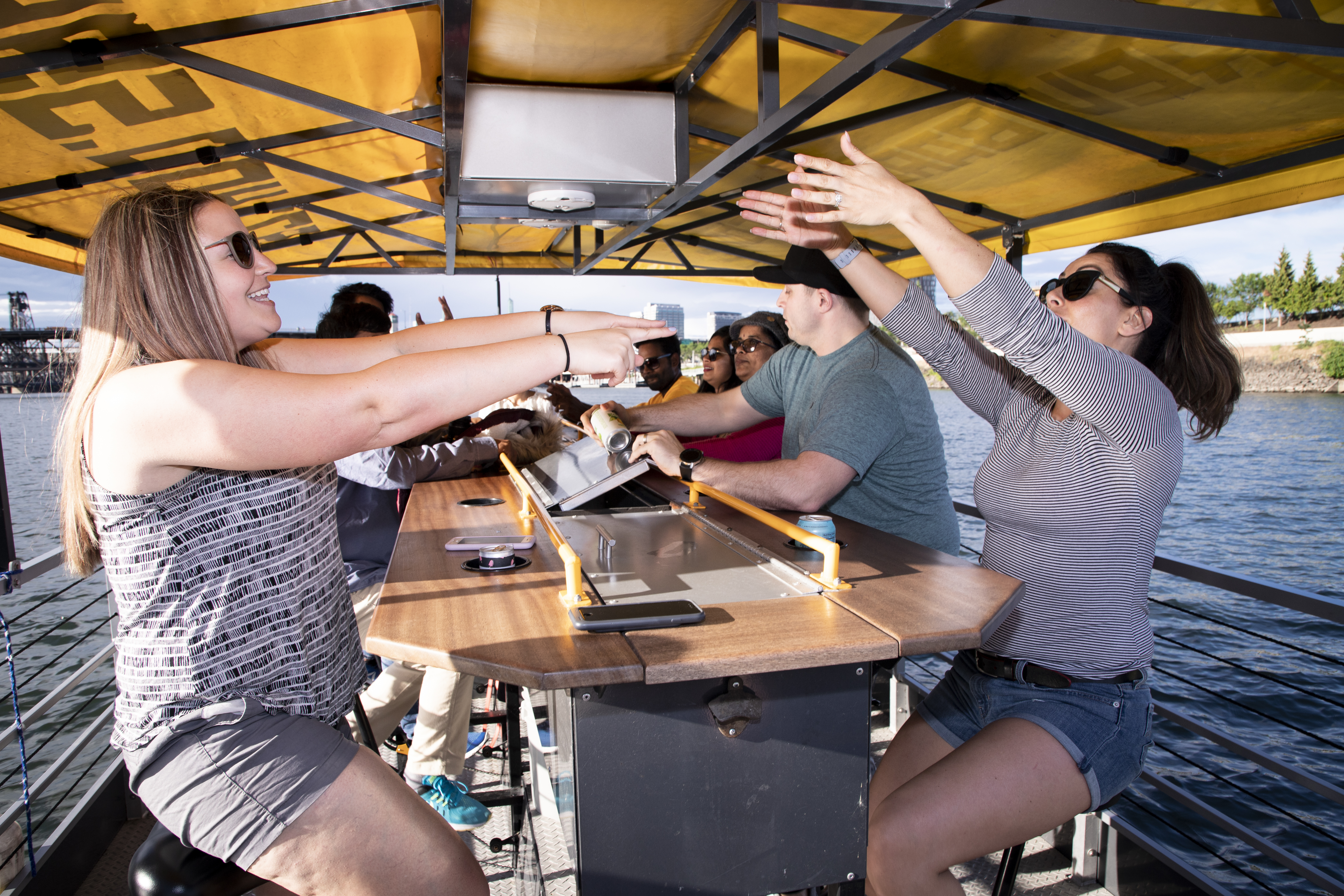 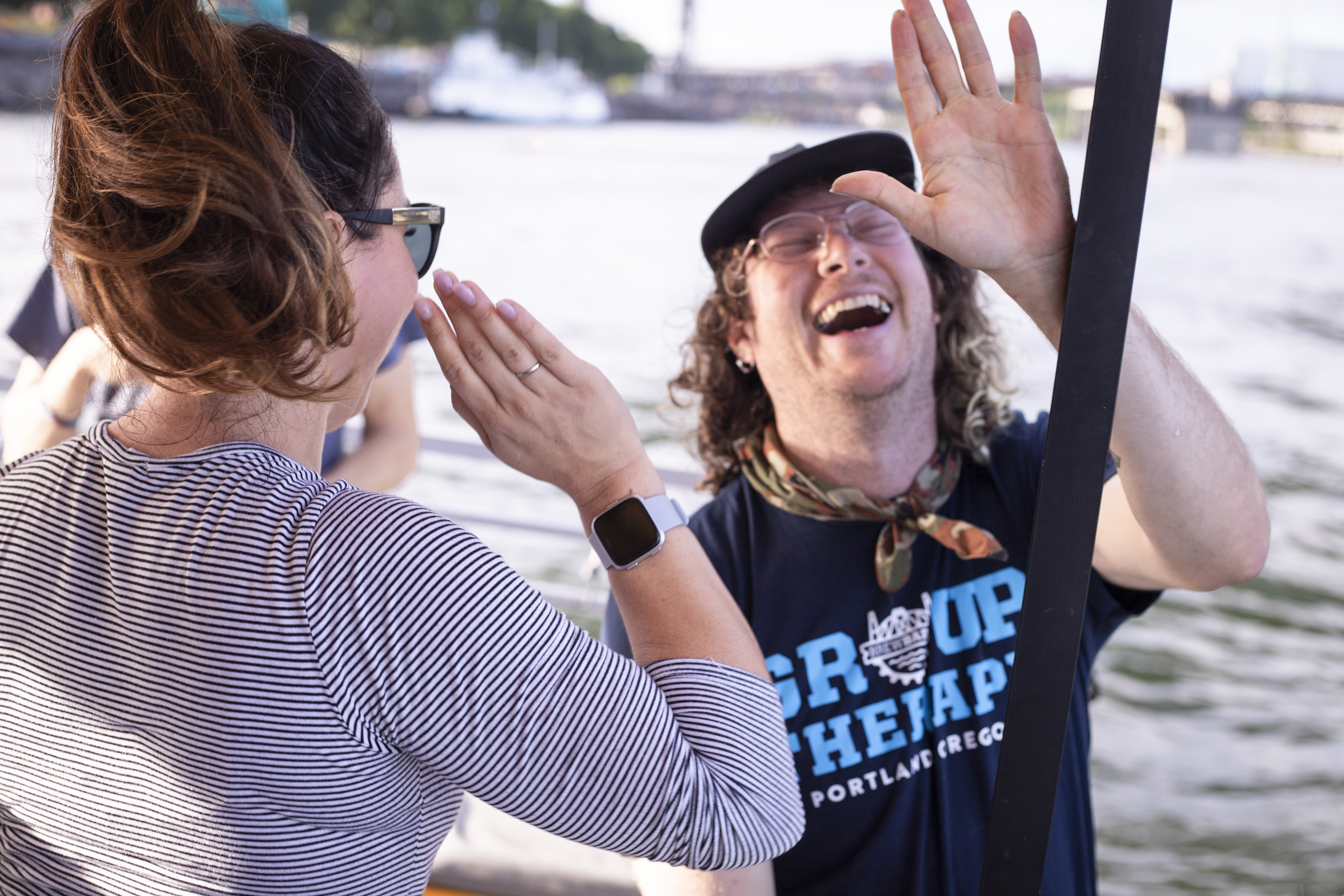 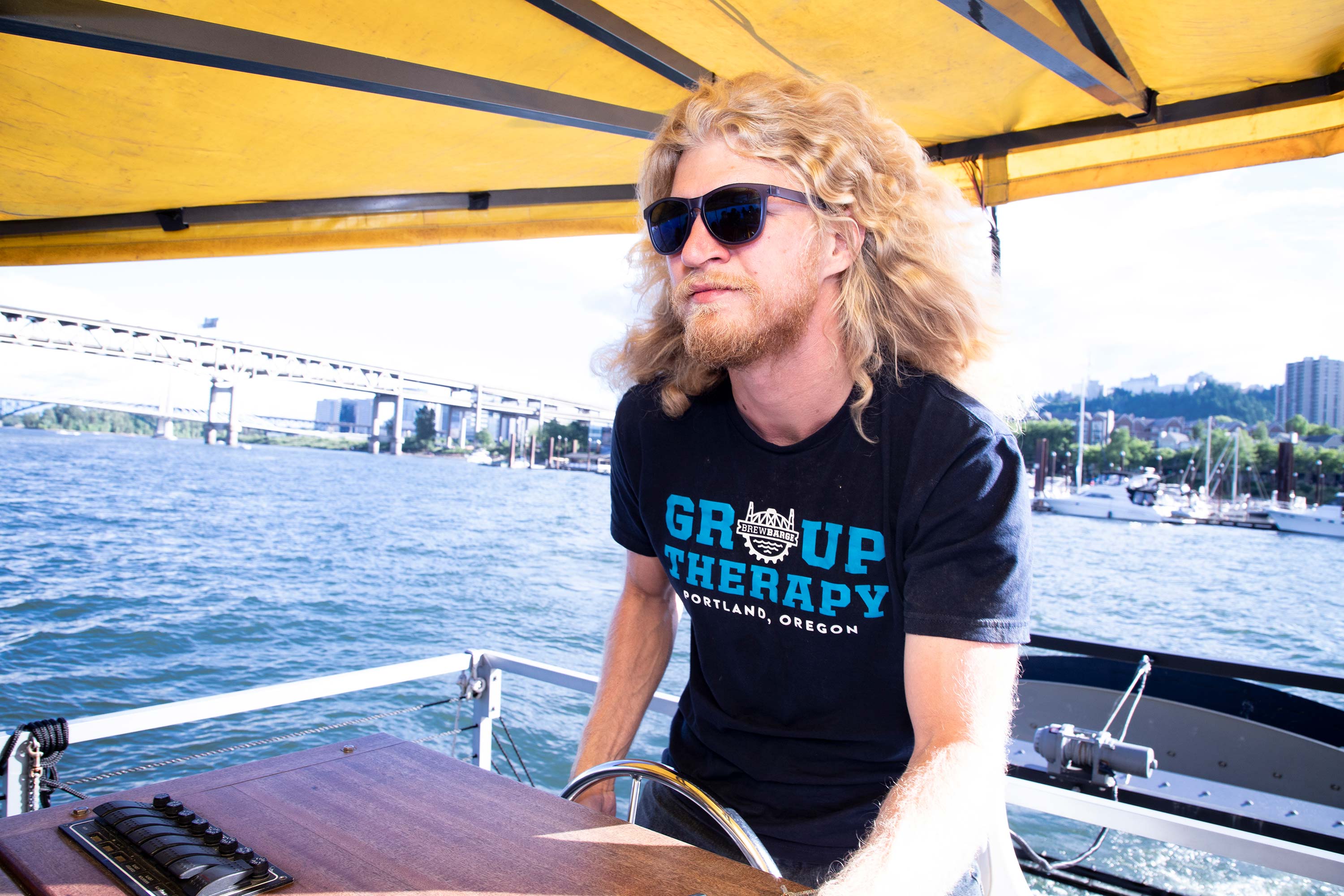 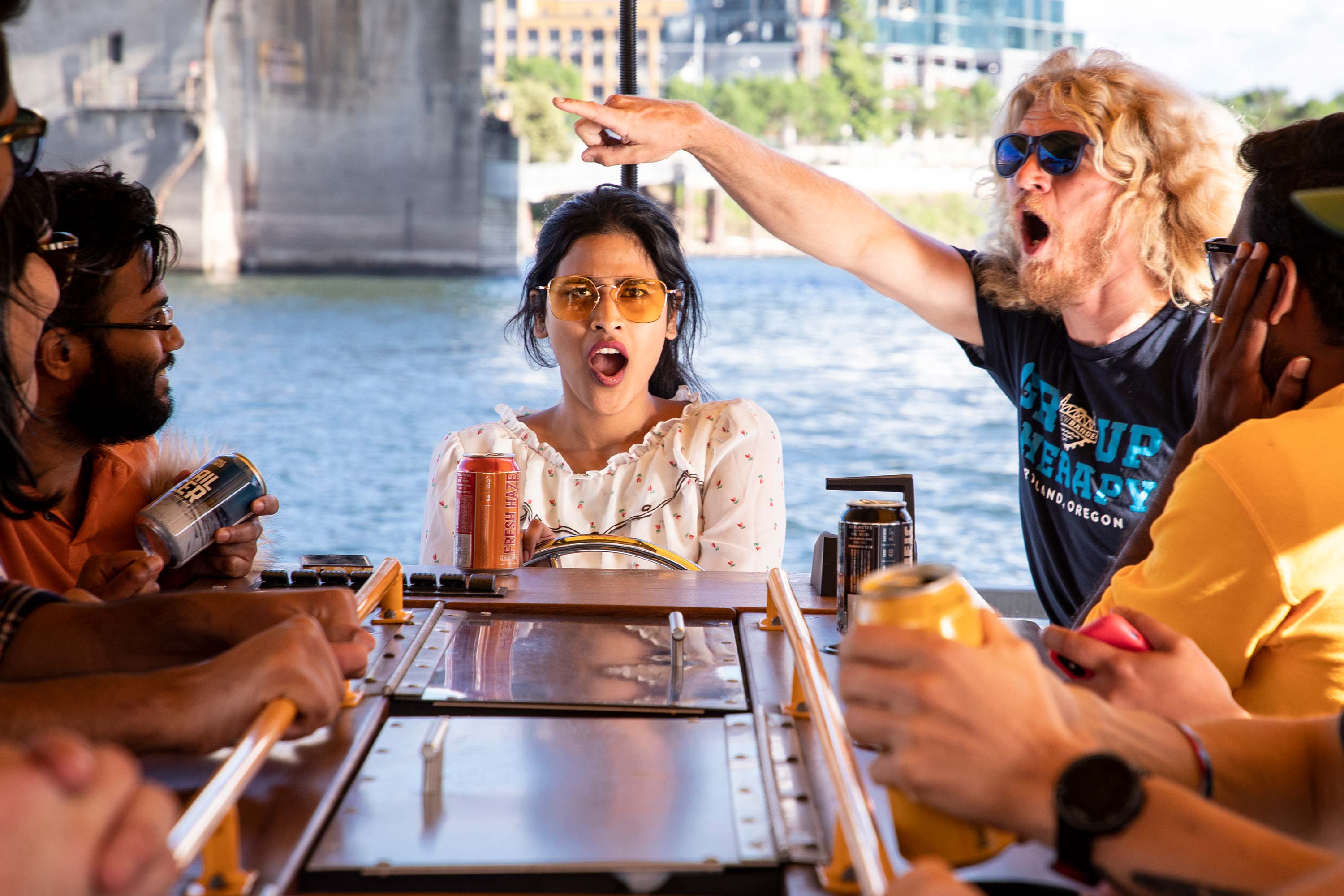 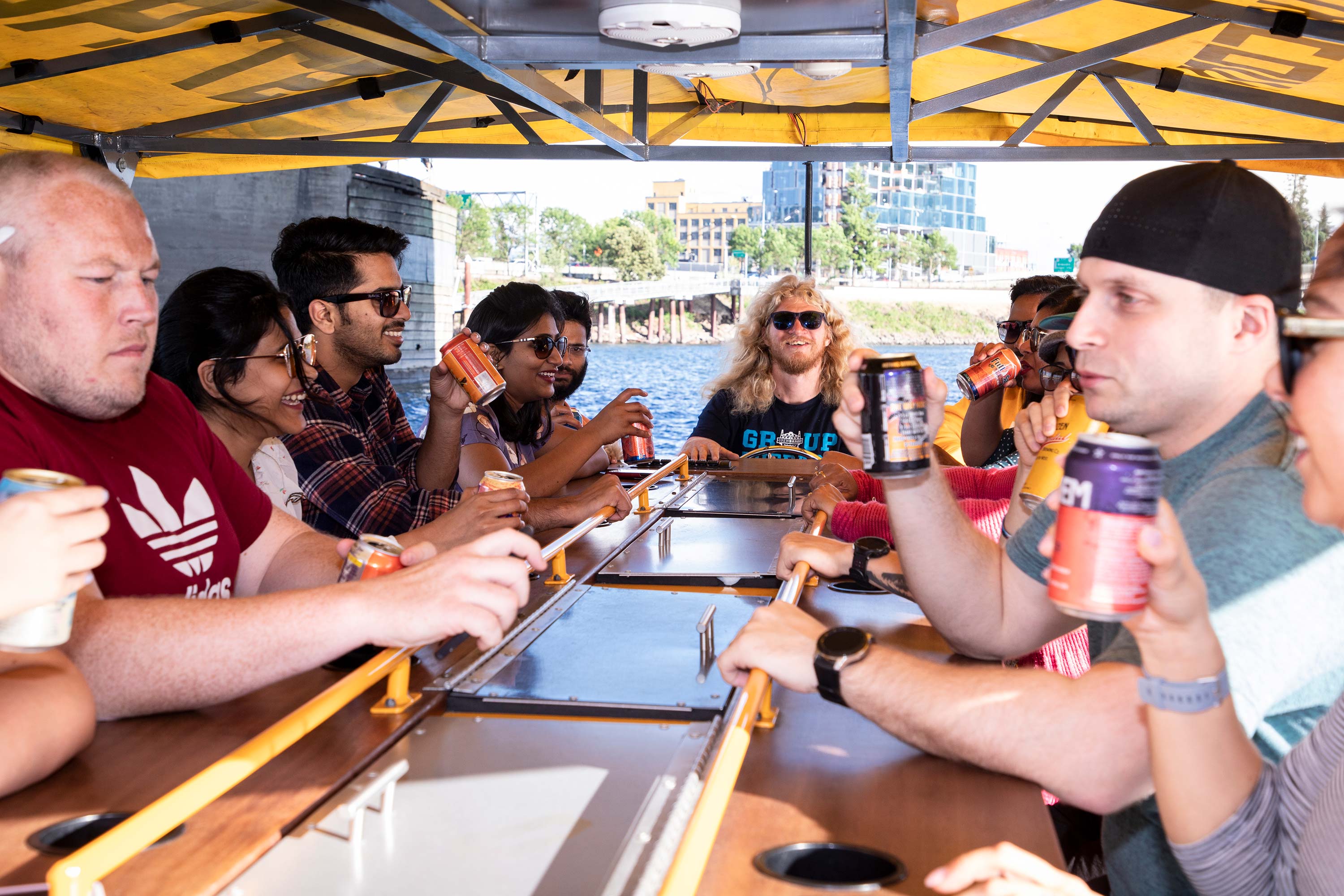 Lindsay Mcauley shouted the lyrics to Lil Nas X’s “Old Town Road” with a beer in hand as the 14-member BrewBarge crew hit the open waters of the Willamette River. “I’m just going to keep pedaling and burn off all the beer,” joked her husband, Nick Mcauley, a mountainous rugby player from Calgary. Captain Steve, a skipper with flowing hair and a bountiful beard, positioned himself at the helm of the ship as deckhand JP cranked up the sound system. The party boatgoers pedaled in besotted unison as the 30-foot vessel pushed through the waves, much like the more famous BrewCycle charges up and down the streets of Portland (the two are operated by the same company). A family visiting from India took over the tunes as sudsy passengers waved to a passing Coast Guard boat. The 90-minute voyage made laps between the Hawthorne and Morrison bridges as each passenger consumed all the beer they could bring on board. Enthusiastic participants took turns at the wheel while under supervision by the captain. When the ship reached the pier once again after 90 minutes, everyone exited in satisfaction. “We just came to check out the city,” said Mcauley’s friend Tom Laidlaw. “It’s been a blast.”