With Microsoft's new HoloLens upping the ante on virtual

finds his exhibition, Electric Fields, at the crossroads of

technology and aesthetics. One of the most intriguing and troubling art

shows ever mounted in a Portland gallery, it throws a new cog into the

enduring quandary of where real life ends and art begins.

what it would be like to walk around inside an abstract painting. In Electric Fields I, II, and III,

which are animations displayed on wall-mounted screens, arcing loops of

like a ticker-tape parade in zero gravity. Coupled with an ambient

soundscape by Jefre Cantu-Ledesma, the animation induces a meditative

state verging on the psychedelic.

the show's pièce de résistance. When you put on the provided VR goggles

and look around, you see an approximation of the gallery you're in, but

it's filled with bands of color squirming like airborne eels. You look

down, and gestural ribbons are coming out of the floor; look up, and

they're rising like vapors until they exit a silo high above. The

technology isn't yet perfectly 3-D, but it's close, and it's no big leap

iris- and sunflower-dotted fields (shades of What Dreams May Come), or the entire Louvre, for that matter, attended by some sexy cyber-docent wearing a…but I digress.

to the larger question of whether virtual reality will expand our

purview or shrink it to the size of our living rooms, where we'll

content ourselves to stumble around with our headsets and holograms,

with no need of actual people. Rotsztain's simulation is as delicious

and rich as foie gras. But foie gras is made from geese force-fed in

cages. If, increasingly, we opt for experiential seductions that

simultaneously sate and isolate us, we risk becoming both the cagers and 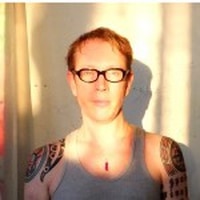 Richard Speer has been a WW contributor since 2002, including a 12-year stint as visual arts critic. His essays and reviews have also appeared in The Los Angeles Times, The Chicago Tribune, The New York Post, Salon, Newsweek and Opera News. He likes good food and drink, conversation, music, and travel and can occasionally be spotted singing his lungs out at Portland karaoke bars.