Jean-Michel Basquiat was a genius—just ask anyone who knew him. That might be because he was one of the most prolific, social and controversial artists in New York City in the 1980s, a part of Andy Warhol's elite inner circle who's still called out in songs by Jay Z, Macklemore and ASAP Rocky. It might be because he overdosed on heroin at age 27, before the world could watch him burn out. 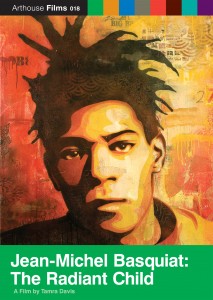 Tamra Davis' 2010 documentary, Jean-Michel Basquiat: The Radiant Child, starts with the Langston Hughes poem Genius Child: "This is a song for the genius child…. Nobody loves a genius child. Kill him—and let his soul run wild."

Davis met Basquiat when he visited California in 1982 to show at Larry Gagosian's West Hollywood gallery. "He didn't know anybody, and he couldn't drive, so it was my job to show him around," she says. The two became close—Davis proudly cites herself as one of Basquiat's many women, alongside pre-famous Madonna—and when he joked that she should make a movie about him, Davis actually started filming.

She didn't share that footage for almost 30 years. "Even though he was dead, it didn't feel right," she says. "So many of his friends had taken things he gave them and sold them. He felt very betrayed."

Davis eventually decided she had the rare power to tell Basquiat's story in his own words. "It turns out this is some of the only footage of him," she says. "I felt it was more important to give him a voice."

Basquiat allowed Davis the rare privilege of filming him intimately. He refused interviews and wouldn't let the press film him working, but in Radiant Child we see Basquiat making frantic brushstrokes to a deafening soundtrack of Ravel's Boléro or sitting on the couch, talking about Cheez Doodles. "There was hardly a time when he didn't have a pencil in his hand," Davis says, and her film is an impressive gallery that shows Basquiat's art next to works by his heroes: van Gogh, Picasso, Charles Darwin. Those stills are spliced with footage of the artist—barely 21—talking about how he preferred to paint in isolation or weighed down with female admirers at elite parties, or arm in arm with Warhol.

Racism rears its head, too. Suzanne Mallouk describes the young Basquiat coming home in tears after a stint at an electrician's shop: "He said: 'I can't be humiliated. We went to this rich lady's Park Avenue apartment, and she treated me like a slave.'" And we see cops looming over a faceless black figure in his Defacement, painted after six NYPD officers beat Michael Stewart to death for doing graffiti in a First Avenue subway station. 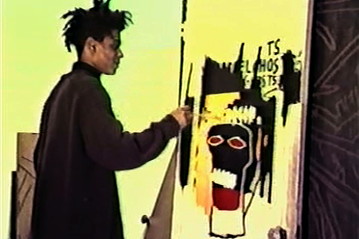 One wonders if he was manic. Basquiat's life seems like a tornado—hundred-dollar bills littering his apartment, TVs constantly playing cartoons, Jimi Hendrix blasting from huge speakers. After back-to-back nights at dance clubs, he'd barricade himself in his studio for days. "We joked that you can date his work by the different sneakers he wore," says curator Diego Cortez in the film, because Basquiat threw his pieces on the floor and walked on them as he moved from canvas to canvas in a multitasking frenzy. When the price of his paintings skyrocketed from $200 to $3 million, he horrified friends by doing all this in Armani suits worth thousands.

By the time he overdosed in 1988, Basquiat was an international phenomenon, a cult-figure chimera who critics pegged as a one-hit wonder. "He wanted to be Picasso," Davis says. "He wanted the respect of being known as an artist. Instead, he got press only focused on his personality and presence. He didn't burn out, but he wasn't patient enough to realize that you just have to stick around."

Davis' film is a talented portrait of a demigod, but the reason it's hard to peel yourself away from the screen isn't the film's merits. It's Basquiat's addicting character. "Everybody has a story about Jean-Michel," says Davis. "You couldn't meet him without being enthralled."