[MUSIC] When Hiatus Kaiyote arrived in Japan recently, the Australian future-soul quartet tweeted an exhausted post-travel selfie. Frontwoman Nai Palm—dressed in an Iggy and the Stooges T-shirt, sequined shrug and acid-washed jeans, with a black bandanna tied around her right ankle and enormous gold chandelier earrings half the size of her face—poses in the center of bassist Paul Bender, percussionist Perrin Moss and keyboardist Simon Mavin. "The way that I adorn myself is more of a physical representation of the things that I'm interested in, or the things that inspire me, or trinkets from the people that I adore," Palm said. Read the full article. Wonder Ballroom, 128 NE Russell St., with Coco Columbia, on Friday, Oct. 9. 9 pm. $20 advance, $23 day of show. 21+.

[COMEDY SHOW] He went to jail for killing a diabetic police horse in Half Baked, he drank a bottle of urine in Dumb and Dumber and he lights up comedy clubs across the country. Harland Williams brings his unique comic touch to Portland, performing hilarious stand-up routines that have been featured on Letterman, The Tonight Show and Comedy Central. Helium Comedy Club, 1510 SE 9th Ave., 888-643-8669. 8 pm Thursday, 7:30 pm & 10 pm Friday-Saturday and 7:30 pm Sunday, Oct. 8-11. $18-$33. 21+.

[ROCK-'N'-ROLL CIRCUS] After exploring Mature Themes and channeling a multiplicity of personalities on last year's double LP Pom Pom, it is clear Ariel Pink is doing it for the kids. His art-damaged take on AM rock is somehow a synergistic element within Urban Outfitters, despite the obvious Zappa and Todd Rundgren influences. Once discovered via anonymous CD-ROM by Animal Collective 10 years ago, and now releasing records on the esteemed 4AD label, few outré artists have broken through like Pink. There's no better band to complement Pink's high-wire act than Atlanta's finest scuzz-rockers, the Black Lips, whose longevity as a group is belied by their joie de vivre for jangly sing-alongs. Having scaled down the hijinks in favor of more nuanced songcraft, last year's Billboard-charting Underneath the Rainbow shows the lads settling in as an ambassador of good vibes the world over. Roseland Theater, 8 NW 6th Ave., 971-230-0033. 9 pm. $21.50. All ages. 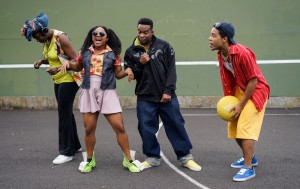 How We Got On

[THEATER] One of the most interesting hip-hop crews in Portland is made up of a graying woman, a teen in her prep-school uniform, and a petite actor who's known for doing drag. They're spitting rhymes about hip-hop's 1980s naissance, but not the popularized Compton street scene. How We Got On is set in a whitewashed Midwestern suburb called "The Hill" and follows three kids trying to find their voices through rap. Read the full article. Portland Playhouse, 602 NE Prescott St.. 7:30 pm Wednesdays-Fridays, 2 pm Sundays and 7:30 pm Saturday, Oct. 10 and 24. Through Oct. 25. $32-$36.

[FOLK-PUNK] There's multiculti, and then there's the Dolomites. Since 1998, the Portland-based project of onetime Gogol Bordello sideman Stevhen Koji Baianu has absorbed traditional sounds from all across the globe—from Japan to the Balkans, South America to Africa to eight-bit Jamaican dub—and spat it out as a sort of travelogue as narrated by Tom Waits, with accordion as the lead instrument. The Dolomites' latest is The Japan Years: Volume I-III, an exploration of Japanese mythology via waltzes, ballads and bizarre dance numbers. It's all over the place, yet once you immerse yourself, it's a world you'll want to spend some time in. Mississippi Pizza, 3552 N Mississippi Ave. 9 pm. $7-$21. 21+.

[INSTRUMENTAL ROCK] Los Angeles duo El Ten Eleven was born in the fertile musical grounds of Silver Lake a little over a decade ago. Bassist Kristian Dunn and drummer Tim Fogarty have built a devoted following thanks to imaginative guitar work, fidgety percussion and well-orchestrated layering. While often labeled post-rock, the duo's work is a bit more playful, informed as much by Mum as it is Mogwai or Battles. There's an uplifting theme in El Ten Eleven's core, and it comes off especially in the band's fifth and newest LP, Fast Forward. Portlanders plotting their own bands should get a fine lesson in dense composition at this show. Wonder Ballroom, 128 NE Russell St., 284-8686. 9 pm. $15 advance, $17 day of show. All ages.

Neo Boys get into the Oregon Hall of Fame

[MUSIC] In 1970s Portland, it's hard to imagine a band that had more going against it than Neo Boys. For one thing, all of the members were underage, as young as 13 when they started. Even if they had been old enough to play proper clubs, those venues weren't exactly keen on booking acts that might attract a crowd of violent punk rockers looking for a place to riot. As musicians, the group was, shall we say, a bit raw, at least in the beginning. And on top of that, their name was a lie. The Boys were actually four girls—an anomaly in Portland, if not totally unheard of—which in those days didn't help when it came to being taken seriously by the ruling rock-'n'-roll patriarchy. It would seem, then, that the band's upcoming induction into the Oregon Music Hall of Fame would represent some level of victory—for punk, for women, for a group of teenagers who didn't wait to grow up or perfect their instruments before making themselves heard. But while they appreciate the recognition, it's coming, as it often has for Neo Boys, a little too late for their liking. Read the full article. The Oregon Music Hall of Fame induction and concert, featuring Storm Large, is at Aladdin Theater, 3017 SE Milwaukie Ave., on Saturday, Oct. 10. 7 pm. $25-$110. Under 21 permitted with legal guardian.

[THEATER + SALSA] Sometimes things just happen at the perfect time. Like, say, the debut of a musical about Castro's Cuba immediately following the normalization of U.S.-Cuba relations. Enter Cuba Libre. Directed by Artists Repertory Theatre's artistic director, Dámaso Rodriguez, the bilingual world premiere tells the story of a fictional musician struggling through life during Cuba's "Special Period"—Castro's name for the era of economic desperation in his country after the Soviet Union fell. But it's more than fiction for the show's many collaborators. Read the full article. The Winningstad Theatre, 1111 SW Broadway, 248-4355, artistsrep.org. 7:30 pm Wednesdays-Sundays, 2 pm Sundays and noon Wednesday, Oct. 21. Through Nov. 15. $35-$56.

[FALL FESTIVAL] Good news: When you get lost in the middle of Kruger's haunted corn maze, there will be a circus tent with fire dancers, hula-hoopers and backwoods geetar-strummin' from some bearded guys called Cedar Teeth to entertain you. Better news: Kruger's has harvest beers on tap. Kruger's Farm, 17100 NW Sauvie Island Road, 621-3489. 6:30 pm. $10, $5 for kids.

[DRINK AND RUN] Teams dressed in dirndls and lederhosen earn their beer by running a few miles around Ladd's Addition and Buckman in search of the Urban Beer Trophy. Whoever can Google the scavenger hunt answers and drink their way through checkpoints wins $500. Bikes are off-limits. Start location will be announced to participants, urbanbeerhunt.com. Noon. $39. 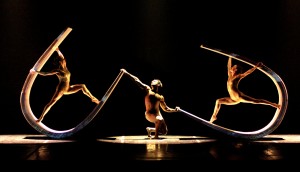 [DANCE] "Describing the new show Alchemia as an escapist fantasy that combines dancers with plants, animals and minerals, choreographer Moses Pendleton categorizes his work as part gymnastics, part theater and all magic. "I try to create a world that takes you out of the world you're in," he says. "It's like being a painter—I work at constructing an image. But then I apply music. Add fire, or cactus, or a rock!"The show is inspired by the ancient science of alchemy. "It's the idea of mixing disparate objects and then spinning them," Pendleton says. "When you move something quickly it can transform." If you think that sounds "woo-woo," Pendleton insists his ethereal ideas translate to plain speak: "Alchemists were looking for a way to live longer. Our modern-day alchemists are Google and Microsoft—we're still trying to find a fountain of youth." The Newmark Theatre, 1111 SW Broadway, portland5.com/newmark-theatre. 7:30 pm Thursday-Saturday and 2 pm Saturday, Oct. 8-10. $26-$70.

[PDX RAP THEN] While the announcement of Portland's first-ever official Hip-Hop Day splintered the local hip-hop community, this celebration of 30 years of rap in the Rose City is certainly something everyone can get behind. The list of acts slated to perform is like a mid-sized festival, but the highlight is '80s pop-rap troupe the U-Krew, maybe the only local rap group to perform on Soul Train. Ash Street Saloon, 225 SW Ash St. 8 pm. $5. 21+.

[BEER + CIDER] Already one of our favorite festivals, this peach beer and cider fest will include a peach version of Breakside's Passionfruit Sour, and barrel-aged farmhouses like de Garde's Beaucoup Desay. Saraveza, 1004 N Killingsworth St., 2 pm. $10.

[TEXAS PUNK] A spinoff of several revered Texas punk bands, the Marked Men, Radioactivity have a sound that'll be familiar to anyone who has listened to basically anything else on the band's label, the Portland-based Dirtnap Records—that is, buzzsaw-fast, heart-on-sleeve melodic and totally fucking awesome. Panic Room, 3100 NE Sandy Blvd. 9 pm. $8. 21+.

The Trials of Spring

[MOVIE NIGHT] Documenting the struggles of women activists during and after the Egyptian Revolution of 2011, Mimi Reticker's film is a riveting display of history unfolding and hope collapsing. Cynical without succumbing to despair and compassionate without being overly sentimental, Reticker honors her subjects by giving them the space to speak for themselves. This is the empowered position that women fought for and largely failed to win in the tumultuous years after Hosni Mubarak's resignation, when military leaders battled Islamist opposition for control of the government. Reticker could have easily extracted a neat little story about noble defiance from her raw material, but The Trials of Spring is more vital than that. It is an act of solidarity, a clear channel for these women's shouts of anger, cries of pain and faith. Critic's Grade: A. NW Film Center's Whitsell Auditorium, 7 pm Sunday, Oct. 11.

[ART GALLERY] Twenty-three years after the release of Bikini Kill's self-titled EP, the Pacific Northwest is ablaze with a riot grrrl revival. There was Riot Grrrl burlesque at the Lovecraft, a sing-along at the Time-Based Art Festival, and Kathleen Hanna's sold-out show at Revolution Hall in April. But as Hanna said then, she's not so eager for a revival as she is to see how punk-rock feminism inspires future movements. That's the intention of Alien She, a Carnegie Mellon exhibit wrapping its West Coast tour with two shows in Portland. 511 Gallery, 511 NW Broadway, 226-4391, and the Museum of Contemporary Craft, 724 NW Davis St., 223-2654. Through Jan. 9.