Your most pressing and/or trivial questions about Portland kicks, answered.

How big is the Portland shoe industry?

Whatever America looks like from the ankles down, it was probably designed in Portland.

All by itself, Nike's $30 billion in revenues puts it in charge of almost half of the nation's athletic shoe market. A well-trainered army of 9,000 employees works on Nike's hundreds-acre empire in unincorporated Washington County, a campus that will expand by 3.2 million square feet next year when the company builds a megalithic glass complex that looks like a giant orange zipper opening up a steel-woven basket.

Under Armour and Adidas—Nos. 2 and 3 in the U.S. in athletic footwear, respectively—are also housing much of their shoe-design divisions in Portland.

German shoe giant Adidas has 1,200 employees at its North Portland uberplex near Old Gold whiskey bar, and it plans to add even more Lebensraum next year. Since 2014, Adidas' head of design has been centered in Portland, not Germany.

In April 2015, Baltimore's Under Armour bought the old downtown Portland YMCA and announced plans to fill the whole thing with Under Armour—including most of its footwear division.

Columbia Sportswear also makes a lot of shoes—$414 million worth in fiscal 2014. People forget that sometimes. (See "Who owns who?" this page.)

Other shoe companies just keep coming. Dutch shoe giant Hi-Tec put its U.S. headquarters in Portland in 2010. Bogs moved here in 2011. Keen came up from California in 2012. Mizuno is expanding in Portland. Uganda's largest shoe exporter, Sseko, is based in Portland.

Chinese shoe company Anta—the official NBA sponsor in China, with Kevin Garnett on its roster—does its U.S. business in Portland. Chinese shoe giant Li-Ning used to do the same (see below).

And when Wisconsin's LaCrosse Footwear bought Danner boots in 1994, it didn't move Danner to milk country, but instead moved its own headquarters near Portland International Airport.

Why do all the shoe companies keep moving to Portland?

"It's the talent," says 27-year Nike veteran Ellen Schmidt-Devlin, who runs the newly founded Sports Product Management program at the University of Oregon campus in Portland. "We have some of the most experienced footwear people in the world living in Portland. They're coming from Nike, from Adidas. We're also a great gateway to Asia. All of those companies are very dependent [for manufacturing] on countries all across Asia, from Vietnam to China. It's easier to communicate from Portland than out of Boston."

Adidas had an additional reason to move its design team to Portland, however. Until this year—when Adidas went on a high-fashion surge that included its Yeezy and Y-3 lines—the company was shedding U.S. market share like cat fuzz in the summer.

"Adidas realized that their product line was far too Eurocentric," says shoe industry analyst Matt Powell, who writes the Sneakernomics column for Forbes. "Across the world, Adidas and Nike are the same size in every country except one. They realized they needed to make their product more appropriate to an American consumer."

Nike and Adidas have also spawned a secondary support industry in Portland that makes it attractive to shoe companies—whether corporate moves or new startups.

"There's a whole economy of freelance shoe designers," says Jennifer Ernst Beaudry, a journalist who's been covering the shoe industry for a decade. "Whether you're recruiting people who love the lifestyle, or the freelance designers [in Portland], you have everything physically there."

So when everybody comes to poach on Nike lands, does this cause fights?

Boy, does it! In December 2014, Nike sued three of its former shoe designers for $10 million, after they jumped ship to work for Adidas, claiming breach of contract and theft of intellectual property. The lawsuit was settled last June, for undisclosed terms. But Nike's suit claimed that the three covered their tracks by wiping phones and smashing laptops, and that at least one of them planned to cop old Nike designs to make a Michael Jackson-themed "Moonwalker" line of retro shoes.

Who owns who among Portland shoe companies?

Nike owns Converse. Adidas owns Reebok. LaCrosse owns Danner, but is in turn owned by Tokyo's ABC-Mart. Columbia owns Pacific Trail, Montrail, Sorel and Mountain Hardwear. Anta bought Fila, after that company was bought by its own Korean subsidiary in 2007. Kevin Plank, a formerly very sweaty football player for the University of Maryland, owns Under Armour.

Who's winning the local sponsorship game?

Nike pretty much owns college athletics throughout Pac-12 country, with exclusive deals at Oregon State and Oregon, Nike soccer invitationals at the University of Portland, and fundraisers at Portland State University.

This year, Nike dropped $10 million to own the branding on Portland's impending bike-share program. It will be called Biketown, in Nike font with a little swoosh, and the bikes will be painted Nike orange. City officials swear it's not pronounced "bikeytown."

But if Nike owns college sports, Adidas has made damn sure it owns Portland professional sports. The Adidas logo adorns not only the home stadium of the Major League Soccer-champion Portland Timbers, but also the feet of the Trail Blazers' only true star, Damian Lillard, and those of local pro skate legend Silas Baxter-Neal.

Under Armour's presence in town is minimal so far—but the company did agree in 2015 to sponsor two parks in Portland, Lents and Duniway, over loud objections from Nike.

What is Nike's best-selling shoe?

In 2015, Nike's best-selling line of NBA-player-endorsed shoes was the Nike LeBron, at $340 million in sales—LeBron James signed a lifetime deal with Nike in December. The LeBron sales almost doubled the amount brought in by runner-up Kevin Durant.

Brand Jordan—a separate Nike subsidiary since 1997—trumped them all at $2.6 billion in sales last year.

But the best-selling Nike shoe of all time, with a 30-year-history, is one of its least flashy: the Air Pegasus running shoe. You probably own a pair and don't even know it.

"It's a very versatile product," says Schmidt-Devlin, who formerly worked on Air Pegasus shoes at Nike. "The Pegasus has always been a product that's ultra-versatile, that has attracted a tremendous following, and Nike's done a great job of updating it and making sure they put in the products at a good price. I'm a Pegasus wearer. If I were to compare it to an automobile—a designer would kill me for saying this—I was going to say the Subaru."

"I probably should say my Prius." 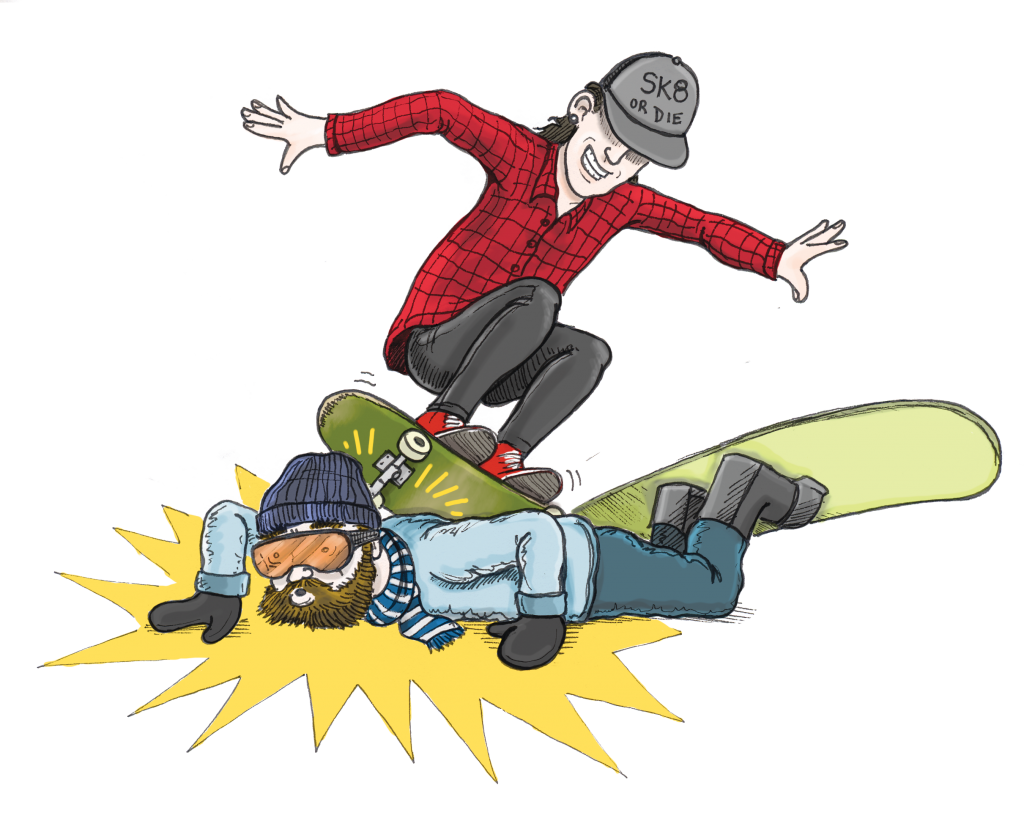 If Nike is doing so well, why did the company suddenly kill its snowboarding program?

At the Sochi Olympics in February 2014, you could be forgiven for thinking Nike was finally set to own snowboarding—a market it had struggled to dominate for years. Nike was riding high on a "Never Not" snowboarding ad campaign, and a stacked team of pros were flashing big Nike boots on Russian powder—including gold medalist Sage Kotsenburg.

But they will never say "Never Not" again.

In September 2014, Nike announced it was cutting its snowboarding program and doubling down on skateboarding.

The only official statement the company issued was characteristically terse: "Nike SB will focus its innovation, design, and marketing resources on its biggest brand driver and growth opportunity, skateboarding. The current Holiday 14 Nike Snowboarding collection will be the final at retail."

"It was quite surprising to all of us, especially with the heavy commitment to the Olympics," says Circe Wallace, an agent to clients ranging from snowboarder Travis Rice to skateboarder Paul "P-Rod" Rodriguez. "They felt like the margin wasn't there, it wasn't a big enough market. I think we're still scratching our heads. Historically you've seen their efforts, and they did it right, and they made a conscious choice to get out."

Wallace says, however, weather may play a role—along with the global market for skate.

"Skateboarding has a low barrier to entry," she says. "You have all of Brazil, Central America, Asia, China. [Nike] never said anything about global warming, but it was part of the equation, I'm sure—we've had quite a few bad winters. I think they saw the writing on the wall. The sad thing is that we needed them."

Although Nike's snowboarding program remains defunct, the company made the surprise move in January to continue sponsoring snowboarders—including 15-year-old Chloe Kim—for streetwear only.

If all the shoe companies want to be here, why did Li-Ning—the "Nike of China"—fold so fast in Portland?

"The primary objective of us being here is to upgrade our talent," a Li-Ning spokesperson said at the time.

But a year later, in February 2012, the retail store was closed, local staff was slashed and Li-Ning quietly moved its operations to Chicago as "Digital Li-Ning," farming out its branding to a Chicago marketing firm. In 2013, the company lost a $1.25 million lawsuit filed by its former Portland design director, who declared working there "intolerable."

Schmidt-Devlin chalks it up to an Icarus story.

"I went to the Beijing Olympics [in 2008]," she says. "The one Chinese athletic brand [Li-Ning] was trying to look international, and all the international brands were trying to look Chinese. They just overextended themselves, and since then they've had to pull back. You've seen it: Somebody tries to play bigger than they are and they place bets. Sometimes you win, sometimes you don't."

Powell, however, figures Li-Ning was just half-hearted to begin with.

"I don't think Li-Ning was ever really committed to the U.S. market," Powell says. "I think they were here so they could say that they were a U.S. brand to the Chinese consumer."