Rhea Butcher says she grew up skateboarding the mean streets of Akron, Ohio. Now the L.A.-based comic is sweeping Bridgetown Comedy Festival—she is in six different shows—and gettinb ready to release her Kill Rock Stars album in August. The show she co-wrote with her wife, Cameron Esposito, will premiere on Seeso, NBC's screening platform, this summer.

Before her Bridgetown shows—including An Evening with Aimee Mann and Ted Leo, It's Gonna Be Okay and Saturday's Kill Rock Stars—Butcher talked to WW about local tattoo artists, menstruation videos and her new show.

Related: Baron Vaughn is one of two comics who has done every year of Bridgetown.

WW: What are you most excited about at Bridgetown this year?

Kill Rock Stars, and it's at the Doug Fir. Getting to perform there is a big treat because I'm a big music fan. I'm all about traditions and history….And Bechdel Test, with a bunch of awesome comedians who happen to be women.

What will you do while you're in town for the long weekend?

I am going to get a tattoo by my friend Alana Robbie. I get tattoos when I am in Portland. I got my grandmother's signature on my arm about a year ago. I had just read Wild and it was right after she had passed away. A tattoo is a big part of [Strayed's] narrative in that and it just made sense to me. The next day, I went to Mississippi Studios for sound check and Cheryl Strayed was there. They were recording Dear Sugar. So I got to show her my tattoo and say, "hey, thanks Cheryl Strayed."

What is your new show about?

It's called Take My Wife, and it's a six-episode sitcom for Seeso, NBC's streaming platform that is all comedy….The show is about myself and my now-wife Cameron Esposito. It's a bit of a workplace comedy, in that it's about our stand up show. It's a scripted show about our lives and our first year of being in Los Angeles….There hasn't been a show written and created and starring two women who are married to each other.

You already have a show in partnership with Amy Poehler's Smart Girls, called She Said. How is that different?

They're [the fan base] definitely younger. Amy Poehler's Smart Girls is doing great things. They just had me go out to cover the Arkansas Film Fest. I got to interview Geena Davis and cover the League of their Own reunion softball game. It's really great for girls and young kids with multiple identities…They're not afraid to talk about things like menstruation. It's just, 'let's just make a video where we talk about it.' I would have appreciated that when I was a kid.

You met your wife Cameron Esposito when you were both living in Chicago. Was Chicago a good place to come up in comedy?

Absolutely. It's a Midwestern blue collar kind of city. That feeling and approach to work is apparent in the comedy scene also, in working hard and learning the craft. It's so valuable to start out that way—hustling, meeting people and seeing the comedians a few years ahead of you. It's like being in comedy college.

New York has a ton of stage time but in LA you have to make the stage time work for you. In Chicago, that's how you get good. I'm very grateful I started in Chicago. It gave me a thermal under my t-shirt of comedy. 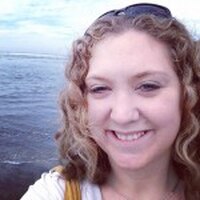 Meryl Williams is an Ohio native who prefers the Pacific Northwest. She loves roller derby, writing personal essays, and shamelessly ordering the kids pack-size popcorn at the movies.