Vaxxed, possibly the most controversial film this year will screen at Cinema 21 next week.

The movie, which bills itself as a documentary and argues that MMR vaccines are tied to rising autism rates, opens on June 17 at Tom Ranieri's arthouse cinema on NW 21st Avenue and producers Del Bigtree and Polly Tommey will host a Q&A after the weekend shows.

The film comes from writer-director Andrew Wakefield, whose 1998 research paper linking the MMR (measles, mumps and rubella) vaccine to autism was discredited, retracted and caused Wakefield to be banned from practicing medicine in the UK.

Vaxxed investigates the connection between MMR vaccination and autism, exploring a whistleblower's claims that the U.S. Centers for Disease Control and Prevention manipulated and destroyed data about the link.

Promoted as "The Film They Don't Want you to See," Vaxxed exploded into the national consciousness when Robert De Niro pulled it from the Tribeca Film Festival, which he is co-founder of, in March after backlash from Festival filmmakers.

The news broke on Fox News, Variety and The Today Show. The Huffington Post took flack after it took down a review by a senior writer. The Village Voice editor-in-chief issued an apology after a promotional e-mail included an ad for Vaxxed.

Philippe Diaz, chairman of Cinema Libre Studio, the Burbank studio that picked up Vaxxed, says, "Tribeca's censorship of the film has allowed a precedent that shows how film festivals are no longer a space for free speech…it's a slap in the face to the First Amendment."

It's not an anti-vaccination film, Diaz argues. Instead, vaccinations are maybe administered to children too young. Wakefield tried to clear his name last month on Fox and Friends, saying that the film is not anti-vaccine, it just shows a "statistical association" between MMR and a "phenomenal spike" in autism cases over the past twenty years, from 1 in 10,000 children to 1 in 68, according to Wakefield. (Most other scientists say this is bullshit.)

Cinema Libre is pushing the film into theaters earlier than planned. The studio plans to get Vaxxed into 200 to 300 theaters before releasing it on home entertainment platforms this July.

Cinema Libre's press release boasts that Vaxxed just grossed over $41,000 in its first week in New York City, and that it has played in theaters in Los Angeles, San Francisco, Atlanta, Philadelphia and Washington D.C.

The city's high exemption rate and rejection of fluoride might make Portland a tinderbox for outrage about the "skyrocketing increase of autism, potentially the most catastrophic epidemic of our lifetime" (quote from a Vaxxed press release).

Cinema 21, traditionally an arthouse movie theater, will screen the film three times a day (four on Saturdays). "I'm not imagining that this is going to set house records," says Ranieri. His decision to show Vaxxed is not necessarily an endorsement.

Instead, Ranieri says he is against censorship and trusts that Portlanders will use the opportunity to engage in civil conversation.

"I'm not a scientist, and I don't pretend I understand all of this," Ranieri says. "I have questions."

See it: Vaxxed: From Cover Up to Catastrophe opens Friday, June 17 at Cinema 21. 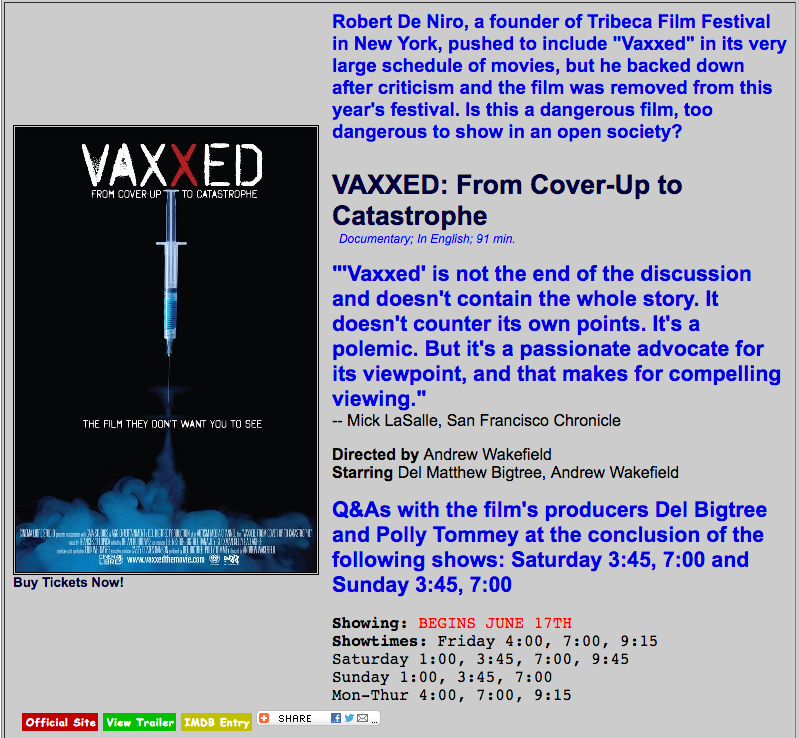