For film buffs who would kill to have lunch with their favorite New Hollywood director, DePalma is your dream date with the creator of Carrie, Scarface, Dressed to Kill and The Untouchables. Sitting in what looks like the living room of fanboys/directors Noah Baumbach or Jake Paltrow, Brian De Palma walks us through his life and IMDb page.

De Palma briefly mentions his Quaker childhood in New Jersey and being drawn to filmmaking after watching Vertigo while studying physics at Columbia University, but he's as impatient to get to his own movies as we are.

As a storyteller, De Palma is the classic aging boomer. All the "holy mackerels" and good-natured chuckles make him so relatable that when he says "Bobby" you forget he means Robert De Niro. Clips from De Palma's films, influences such as Hitchcock, and even home movies from his pal "Stevie" (Steven Spielberg) are woven into his yarn, with only De Palma's voice narrating the film.

In fact, this documentary is exclusively De Palma on De Palma. Free of the usual parade of talking heads, De Palma draws out the director's revealing opinions on his career. He goes so far as to declare himself the only filmmaker who truly emulates Hitchcock's narrative style. It is that hardheaded sense of self that strengthened his determination to stay true to his visual style and earned him the followers who will bask in this film. 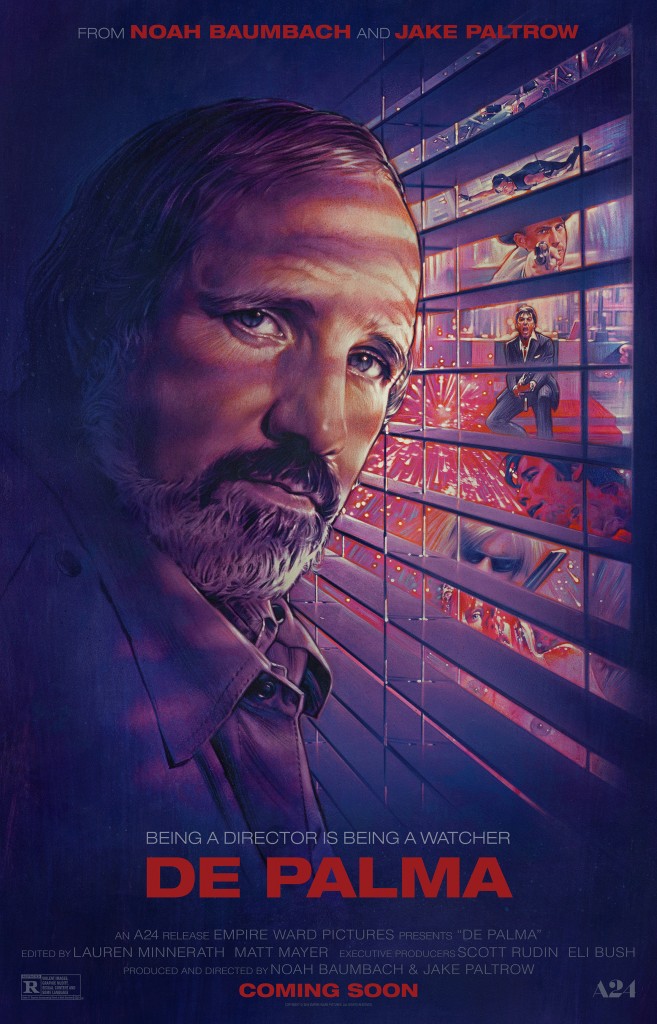 De Palma's take on the movie biz is refreshing because, although he is considered one of the most artistic directors of the past 40 years, he makes no fuss about inspiration or originality.

"People talk a lot about directors being 'too much' or 'going overboard,'" he says at one point, "but in my movies, I just did what made sense to me. I get asked a lot, 'Why did you have to kill her with such a big drill bit in Body Double?' It was the only logical way to shoot it, in my mind. The bit had to go through the floor in that scene. Of course it had to be that big."

Many will come for the behind-the-scenes gossip from the sets of De Palma's iconic films. Yes, screenwriter Oliver Stone was thrown off the set for being a total shit during the filming of Scarface. But it's De Palma's breakdown of the unwritten laws of Hollywood and his demystification of filmmaking technique that make this an important film for any moviegoer. Not to mention his explanation of how hip-hop saved Scarface.

see it: De Palma is not rated. It opens Friday, at the Hollywood Theatre.

Lauren has contributed to the Willamette Week's weed column since 2013, initially going by "Mary Romano" until marijuana became legal in Oregon. She also writes about movies, plays and restaurants for the Art and Culture section.