In 1989, at age 11, Sophia Shalmiyev fled Soviet Russia for the United States with her father, leaving her mother behind.

Years after leaving Leningrad, however, Shalmiyev found herself haunted by the loss of someone who was never quite there to begin with—an absentee mother who disappeared into crumbling alcoholism, showing up from time to time to steal her daughter away, but never for long enough to nurture her.

"I barely remember the day we didn't say goodbye," Shalmiyev, who now lives in Portland, writes in her debut memoir, Mother Winter (Simon & Schuster, 288 pages, $25), a book about searching for a parent she recalls only through her own bodily yearning. Living with her father and stepmother in New York, she's told to forget her mother, but the urge to reconnect will not leave her. "Why do mothers have to be forgotten or brave, like soldiers?" Shalmiyev asks, craving another path.

In Mother Winter, her prose is weary and wise, each paragraph unindented and separated by a blank line so it stands on its own, like poetry. She reveals she lost the notecards she used to keep drafts for the book, yet Mother Winter takes the form of a series of scribbled memories: She describes the shimmering in the sky of the Aurora Borealis witnessed in her childhood home of Leningrad, and the clear-cut trees she documents as an adult in Oregon.

The connective tissue in the book is her quest to grieve and grow. The blood and guts are in every paragraph—at one point, she describes a lie as being like a "skin graft" she wants to pull off. But the narrative is also underpinned by the drive to cut through the misogyny within every dominant narrative, from the father who beat her as a child and called her a slut to the smug, soon-to-be rock stars she encountered in the Seattle music scene to the history of literature itself.

Ultimately, Shalmiyev finds solace raising her own children. But this is not a clichéd tale of personal triumph. In Mother Winter, there is no place without trauma, only the space to imagine something else.

"Whenever men sing love songs to women on the radio I don't think they are for me," she writes at one point. "I picture myself as the guy and I'm speaking directly to my mother…This has nothing to do with fucking. It's about symbiosis." 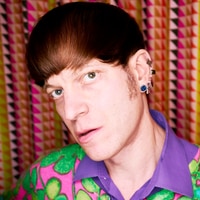 Mattilda Bernstein Sycamore is the author of a memoir and three novels, and the editor of five nonfiction anthologies. Her new novel, Sketchtasy, was named one of the Best Books of 2018 by NPR Books and Jezebel. Mattilda lives in Seattle, where she likes the rain almost as much as the sun.