Though much of his work vibrates with rage, he’s found equal inspiration in the community that’s formed around the demonstrations.

The first time Bird O’Flaerty painted an image inspired by the Portland protests, he was pissed off—and it shows.

It was early in the uprising, long before federal officers arrived in town, and before the clashes between police and protesters turned into a predictable routine. Getting his first taste of tear gas opened O’Flaerty’s eyes.

“The general message was, ‘We’re here to protect Portland’s property,’” says O’Flaerty, 36. “Whatever the cops’ intentions are, that became real to me for the first time.”

He was still vibrating with rage when he got back home that night. A tattoo artist by trade who attended art school in Colorado, O’Flaerty broke out his watercolors and illustrated his feelings: It took the form of a pig in a police uniform, accompanied by the phrase “To Serve the Wealthy and Protect Their Property.”

Defund the Portland Police Bullies! If you think this is an extreme request, try coming down to the peaceful protest without armor and gas mask. I’ll visit u in the hospital. #portland #pdx #portlandoregon #ppb #defundthepolice #blacklivesmatter #BLM #fuck12 #fuckthepolice #nojusticenopeace

“It’s sort of like, get the creative juices out to cleanse out the vitriol,” he says.

As he continued to attend the protests, three or four nights per week, painting became a mental health ritual for O’Flaerty. Although there’s still plenty of anger in the pieces he shares on social media, he’s found equal inspiration in the community that’s formed around the demonstrations: In one, a team of street medics charge into a cloud of gas, loomed over by Imperial Walkers, the ambulatory armored vehicles used against the Rebel Alliance in The Empire Strikes Back. (Star Wars is a common motif for him: He’s also painted President Trump as Emperor Palpatine.) Afterward, O’Flaerty became a medic himself, attending to injured protesters and helping flush out their eyes.

Initially, painting the protests were O’Flaerty’s way of processing what he was witnessing every night. He’s since come to see it as documenting a moment in history. Below, O’Flaerty shares some of what he’s seen, and why he decided to turn it into art. 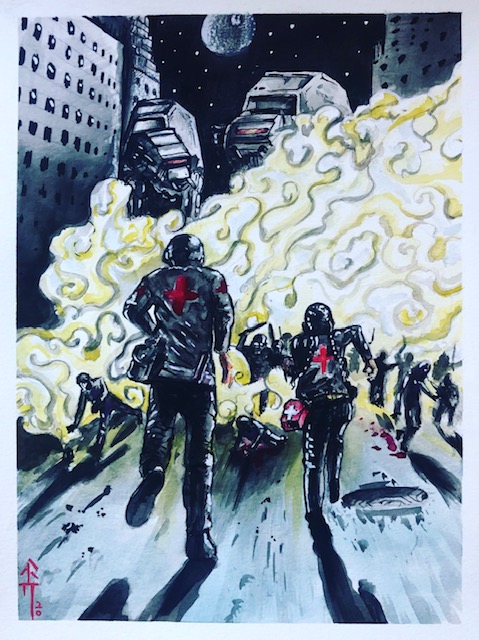 “Here’s a tribute to some amazing troops of the uprising. I’ve seen street medics rush into clouds of tear gas against walls of federal agents to pull people out who are burned by the gas, unable to breathe. I’ve seen them stretcher people out after catastrophic asthma attacks and seizures, overdoses and head injuries. They deescalate fights and support the traumatized and shell-shocked. They’ve washed gas from my own eyes over and over, and I’ve seen them beaten and trampled by Trump’s thugs. Even in war, it’s illegal to gas and to target medics.” 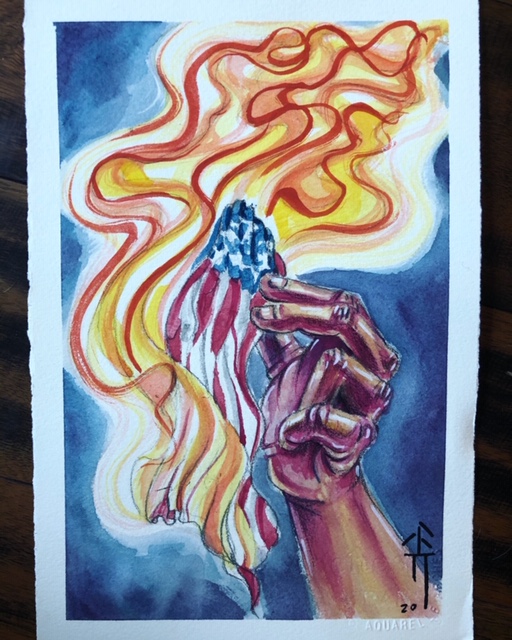 “This is not sacred. The great experiment is done, so it’s time for a new hypothesis. I want to live in a country worthy of loving: a place where people are more sacred than fabric.” 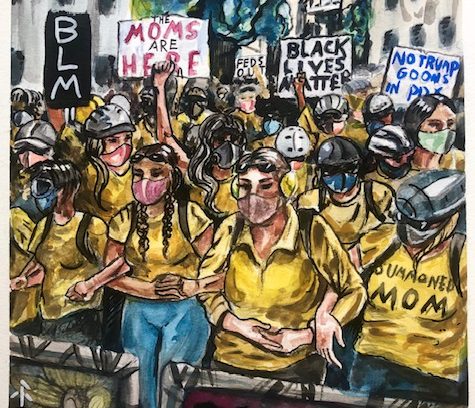 “When Mama came marching in. Trump sent in his mercs to say, ‘Black lives don’t matter, and neither do any one else’s but mine. You’re only as free as I let you be.’ Anti-fascist moms of every color and creed said, ‘No!’ Moms carried us all, and they will do it again when needed and make history in the process.” 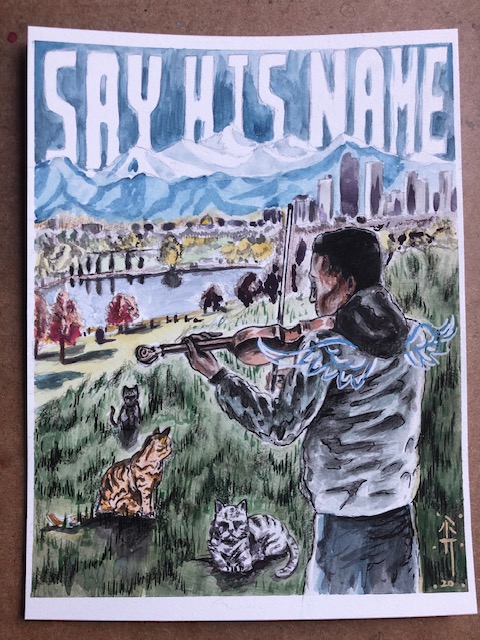 “[Elijah McClain] was a beautiful soul who was brutally murdered by cops for being Black. We demand justice for Elijah!” 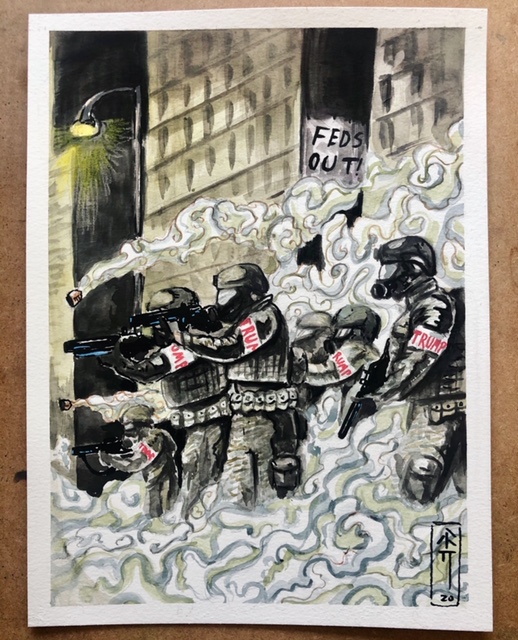 “While we march for the right to live and demand justice, our homegrown despot releases his hounds on Black folks, brown folks, allies, moms, veterans and all else he doesn’t give a shit about. And it’s all for campaign photos. Feds—history will not treat you kindly.” 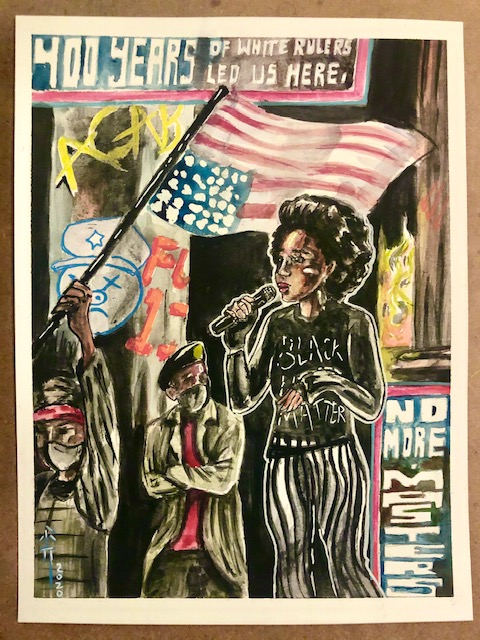 “In Portland, we’re following Black leaders. We’ve had the ‘white way’ for 400 years, and it led us to politicians who create legislation for their own wealth and use racist militants to further their gains. We live in a fake democracy. Votes do little to nothing, money makes the rules, and prisons are full of modern-day slaves. Cops murder people of color with legal immunity, the wealth gap is sickening, Indigenous people are invisible in extreme poverty, and now people are at war with the government because they won’t listen. This is the Trump era: Rich white men brought us here. This is the white way. I’m ready for a different way.” 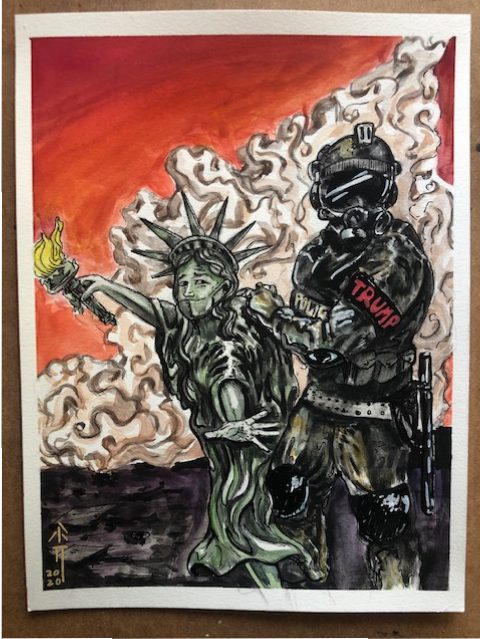 “She’s a symbol of the liberty we were supposed to have and never did. Her arms were meant to welcome the broken and oppressed but never did. And why? Racism. Now, the child president has removed even the illusion of liberty.”