With the new Orange Line, TriMet gave us a time machine. Traveling south to Milwaukie, one $1.50 dive-bar draft at a time, is like a trip back to fabled Old Portland.

Sure, you could start your crawl along the Orange Line at OMSI and eat sandwiches with Isaac Brock at Bunk, or drink with weirdly aggressive techbros at Apex by the Southeast 12th Avenue and Clinton Street stop. That misses the point, though.

Spiritually, the headwaters of the Orange Line are the stop at Southeast 17th Avenue and Rhine Street, between a spartan cannabis club named after a Grateful Dead song and the Lotsa Luck Bar & Grill—a Greek-owned dive bar that survives from an era when Greek-owned dive bars defined our city's nightlife. From off-neighborhood shanties with signs supporting sexual harassment, to ostensible Irish bars that play only nü metal, the Orange Line is a trip back in time to a Portland that California money and waves of migration never touched.

And it might just be Portland's new best transit-aided bar crawl. We'd happily go to any and all of these places again—or, at least, to the other strip club next door. 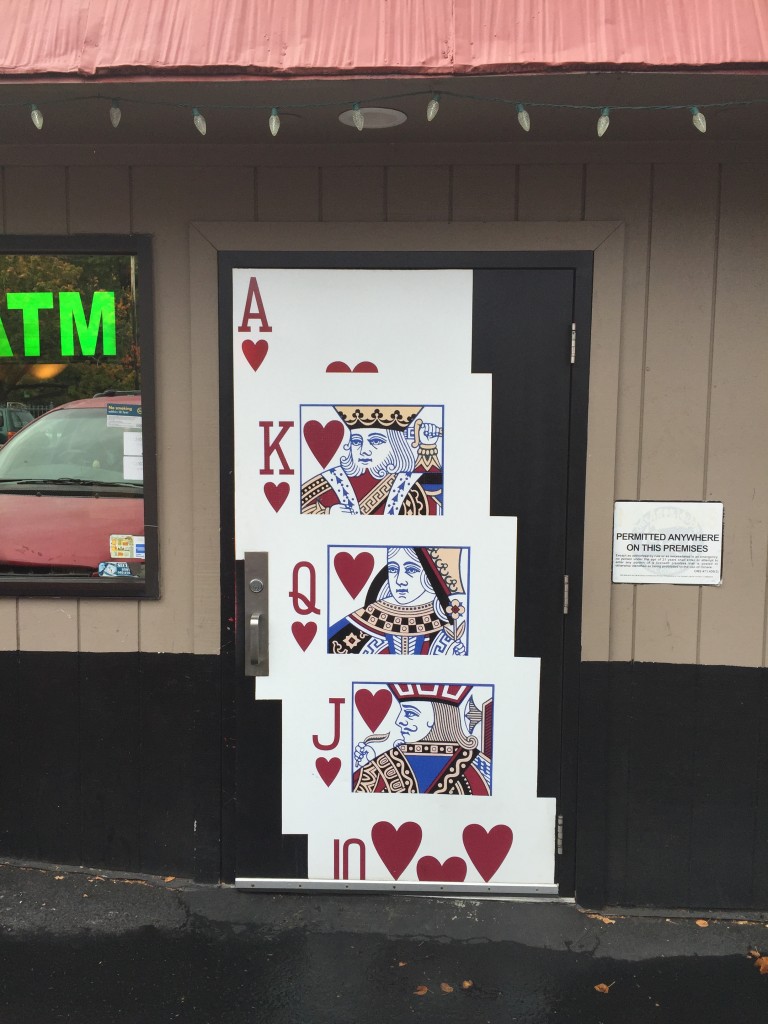 Always begin a journey with something lucky. If you're taking your covered wagon down the Oregon Trail, slaughter a rabbit and take its feet with you. If you're going on an Orange Line bar crawl, start with the playing-card-covered door at Lotsa Luck.

Most auspicious adventures start with some bickering. Ours began with a fundamental disagreement about whether the "liquor before beer, in the clear" adage was correct, so the drink selections ranged from an orange vodka drop shot in orange juice called an Orange Tic-Tac to a lemon-lime soda concoction that had a terrifyingly sweet alcohol bite that gave me flashbacks to former hangovers—I still drank every sip. 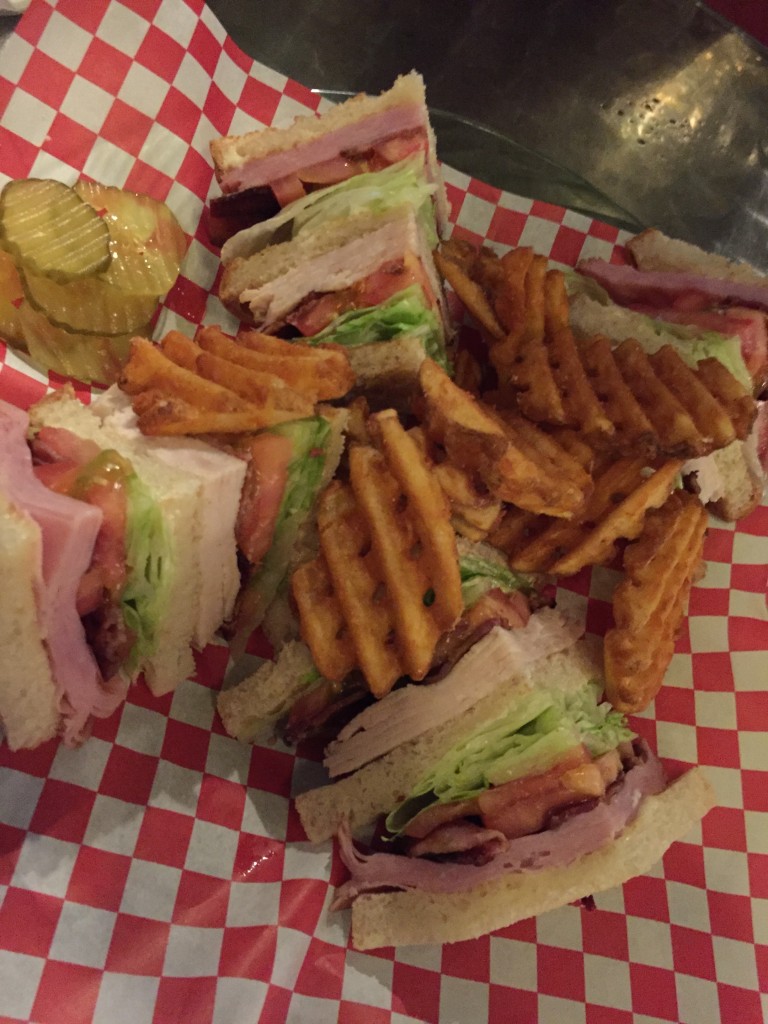 The more reserved in the group ordered PBR on tap, and we chose seats in the upper landing, away from the professional Lottery-machine crowd. Apparently on weekends, the chairs we slid into—much comfier than those provided for us at the office—are occupied by a group of old men who won't let anyone else sit with them. We ate our fill of nachos and club sandwich, made by the bartender, with crisscross fries cooked in the fryer behind the bar, to keep our energy and determination up. We talked about high-school sports, which seemed exactly right. LIZZY ACKER. 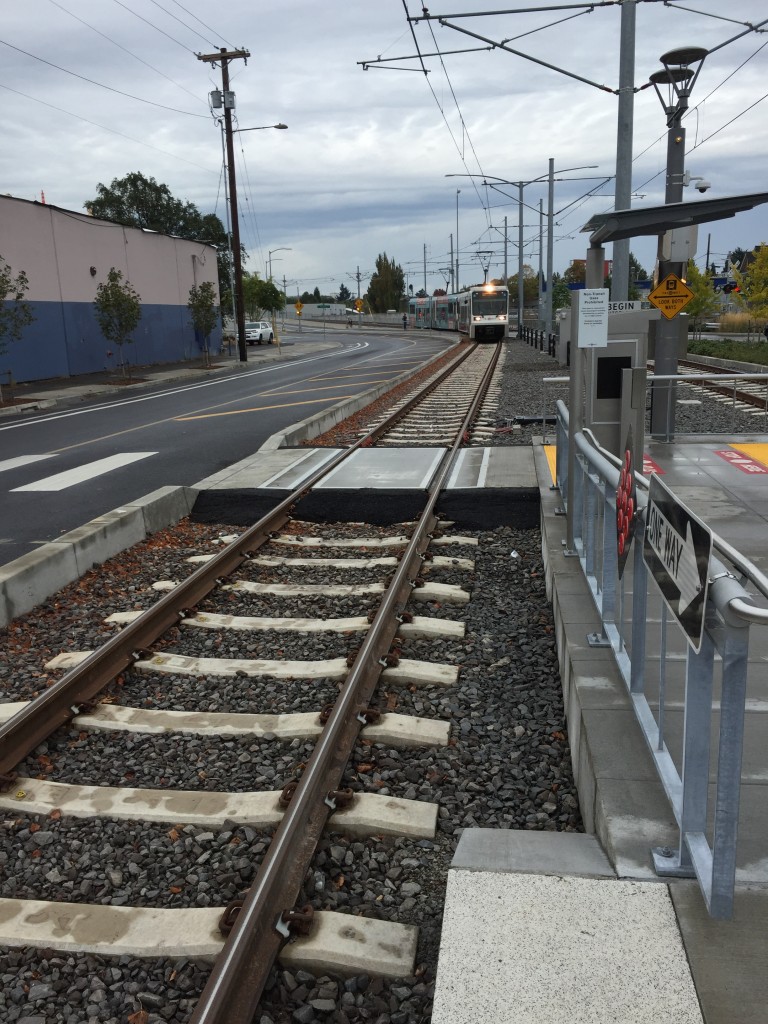 Other nearby attractions: Pakalolo dispensary. 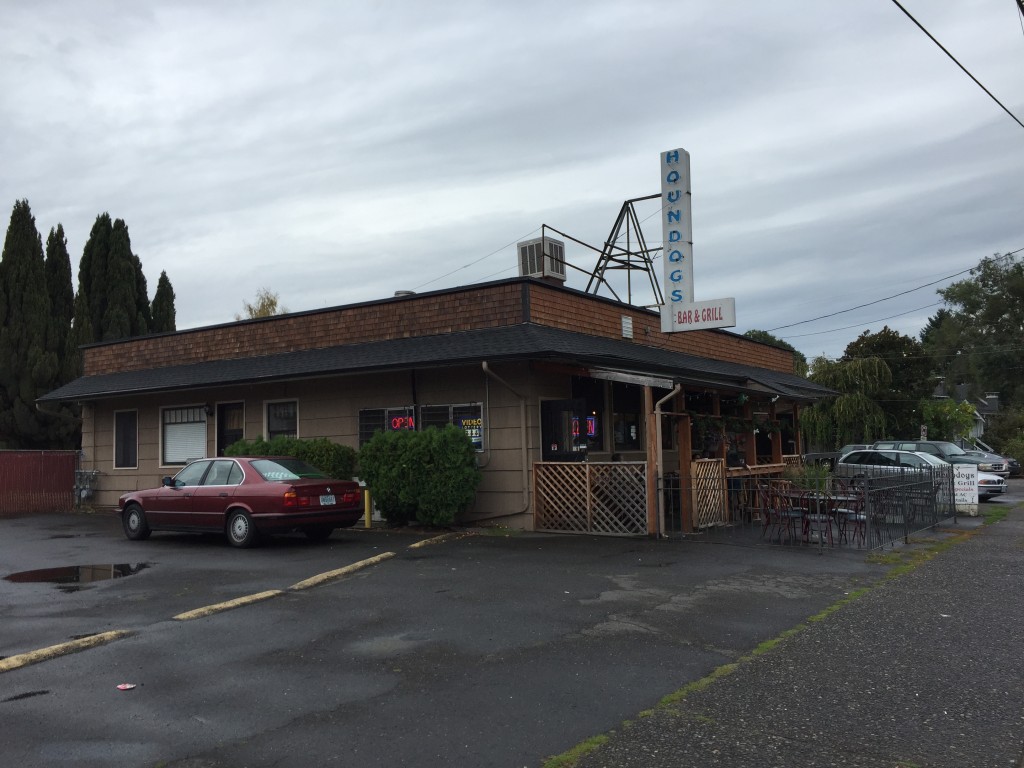 The large neon sign above the bar announced our second stop on the bar crawl, Houndog Bar & Grill—one word, one "d." Though the building was not much to look at, the gated patio in front gives the place a welcoming feel. Above the bar hang signs with quips like "If you think our barmaids are beautiful…don't drive!" The bar was fairly hopping for Wednesday afternoon, and the bartender seemed to know everyone by name. The happy-hour menu rotates every two hours—we got $1.50 draft Hamm's. The bartender asked if we'd like $1 Jell-O shots to accompany our Hamm's. It was an offer we could not refuse. We took our drinks out to the patio, which was small but cozy, though if cigarette smoke bothers you, it may be wise to stay indoors. 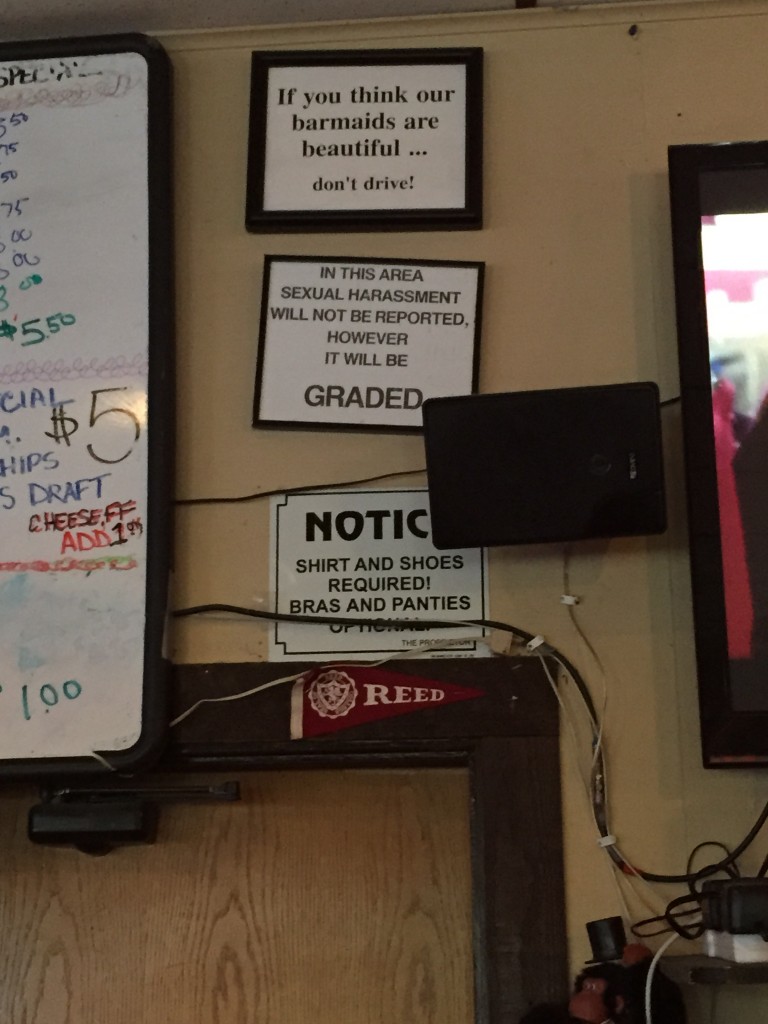 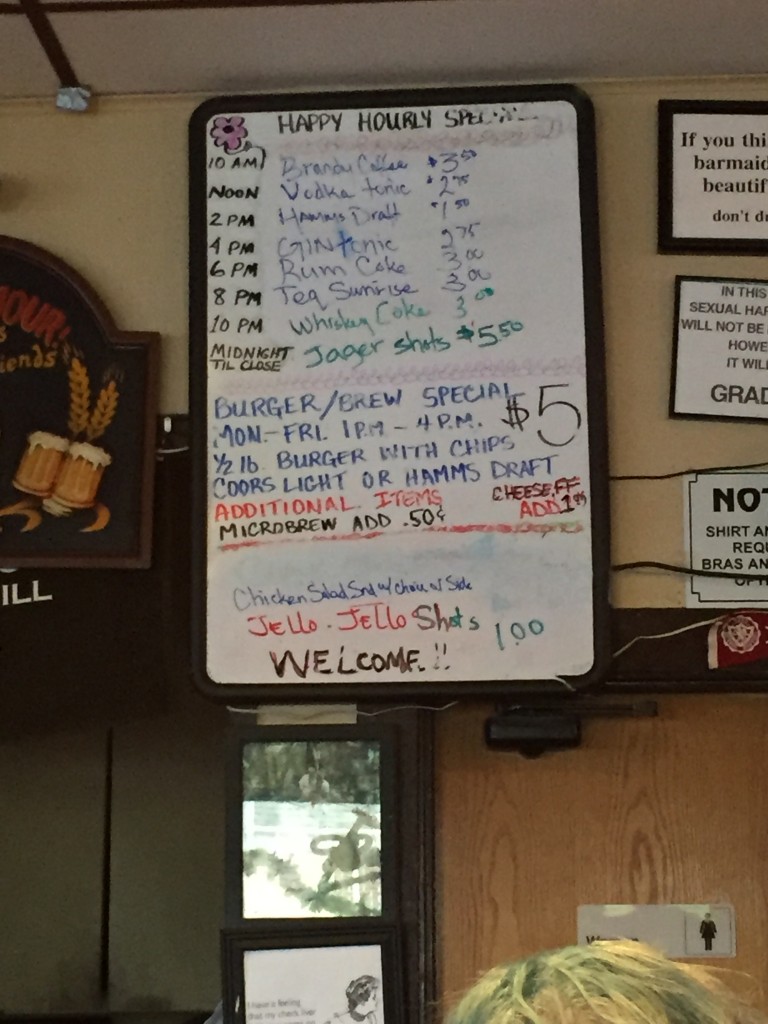 The Hamm's was light and pleasant, and the watermelon Jell-O shot rounded it off quite nicely. Just as Jell-O shots should be, it was sweet and artificially fruity. The topic of conversation among the group centered on gun control, douchey train conductors and Barack Obama. Twenty minutes later, as I began wondering whether I should grab another Jell-O shot for the road, it was time to leave. We had to run to catch the train, but we made it just in time. KATANA DUMONT. 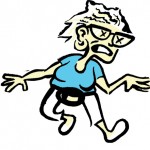 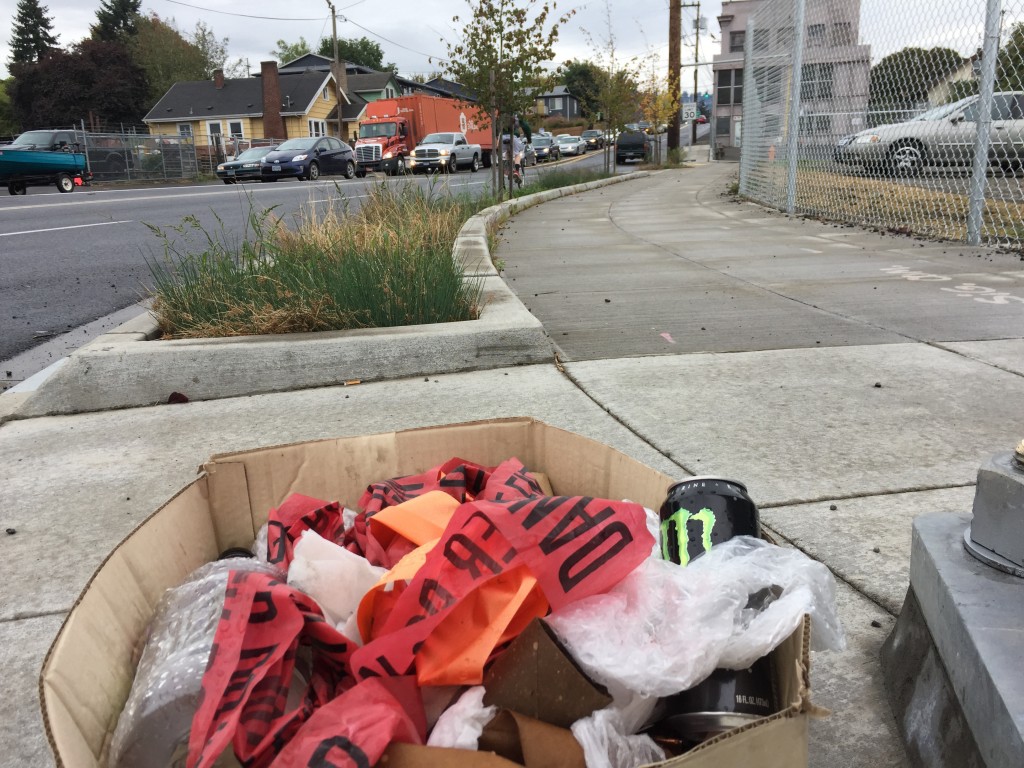 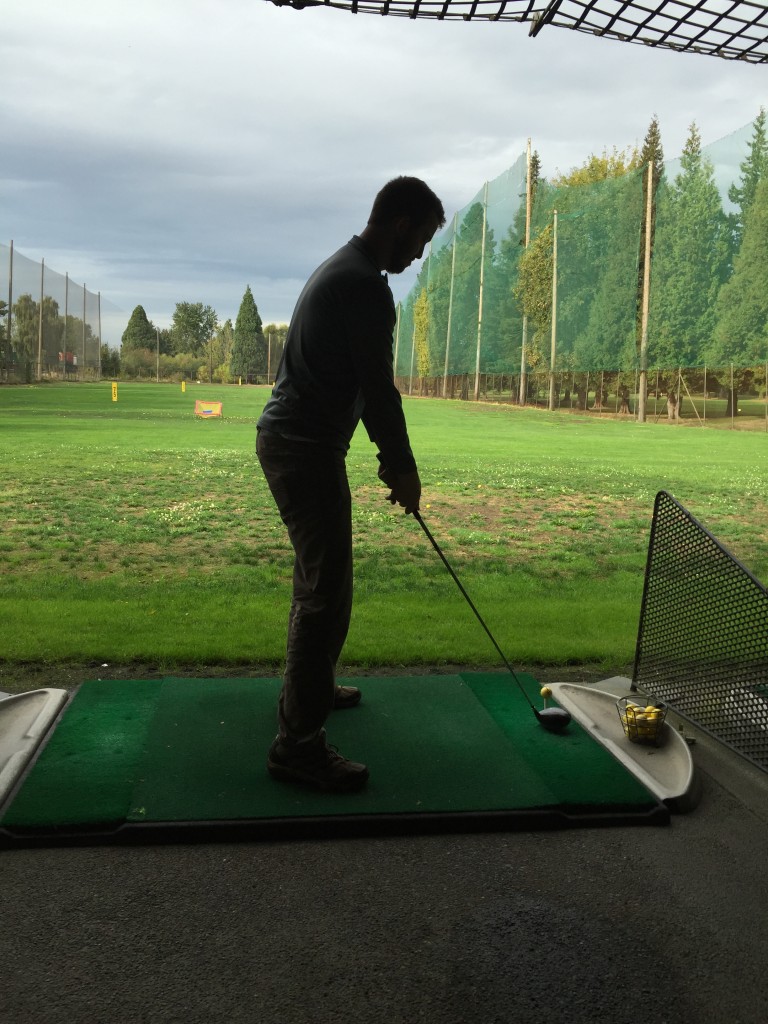 Just north of the yawning, gray expanse of 99E and the McLoughlin Boulevard industrial district lies one of Portland's best-kept day-drinking secrets. Nestled in peaceful Eastmoreland, right by the MAX tracks, the city-owned Eastmoreland Golf Course is not only open for inexpensive rounds and range buckets, but is home to a pleasant, no-frills bar and grill called, ahem, Bar & Grill. 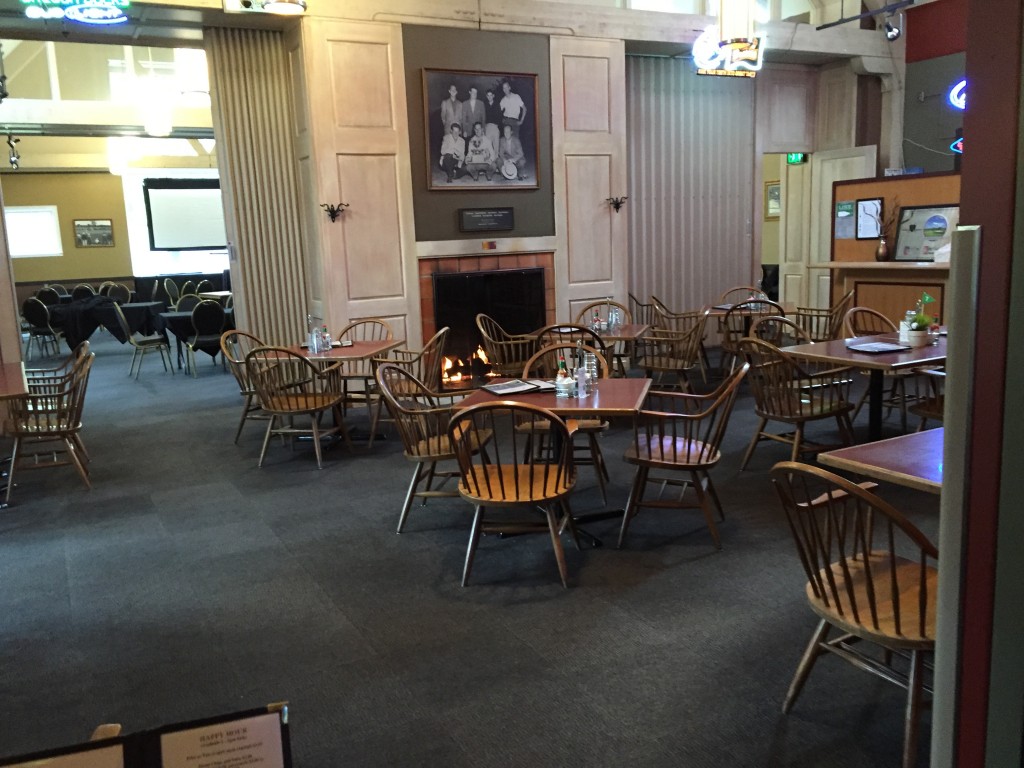 The golf course is working-class luxury. The bar and grill has a respectable number of high-quality local brews on tap, an impressive selection of dad liquor, and a plethora of high-calorie bar-food classics to enjoy in the roomy, almost century-old clubhouse. Ask for your Gigantic IPA or Hennessy in a plastic cup so you can take it out to the driving range, and bet the next $4 bucket on who can hit the ball the farthest. Afterward, cool down with a short walk to Crystal Springs Rhododendron Garden, and finish the day at the nearby Reed College campus, where you can spend a few hours checking your privilege before heading home. WALKER MACMURDO. 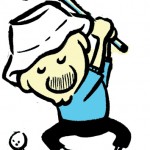 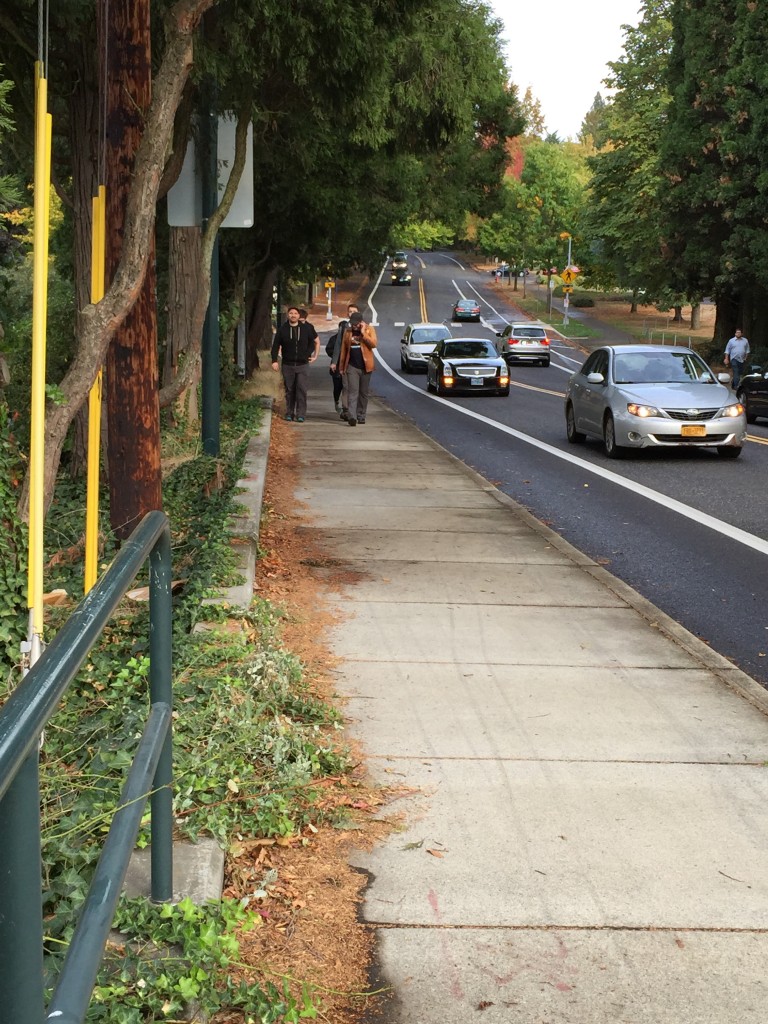 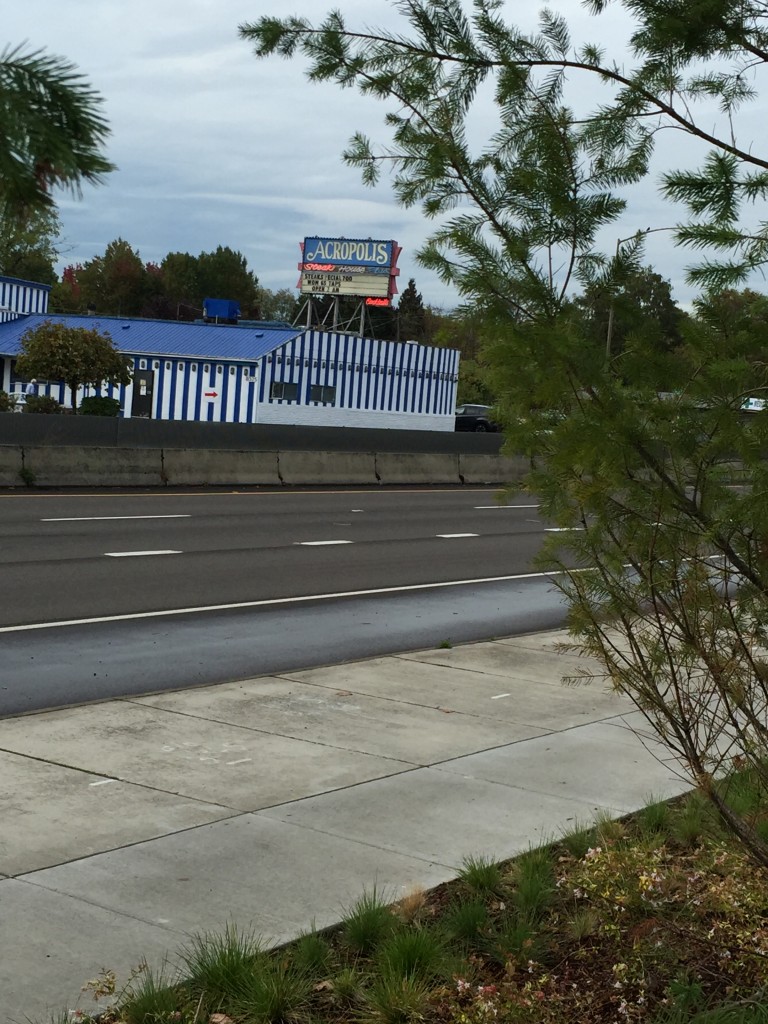 This stop looked like another winner. Two strip clubs and a marijuana dispensary sit directly across the street from the MAX station, just a long Sebastian Janikowski field goal away. Unfortunately, that street is six lanes of state highway, and there is steel fencing atop the concrete divider to deter would be Froggers.

Navigating the two oddly placed pedestrian bridges seemed arduous, so I called Uber to drive us around the highway—the driver sat parked on a residential street until after he was supposed to arrive, then said he needed more time. So just go to the bridge on the north side of the station and climb down the stairs to the highway and an oddly scenic homeless encampment on the banks of Johnson Creek.

Acropolis, too, is better in theory than reality. The famous steakhouse and strip club, like so many local legends, seems bored. An off-duty dancer lying on her belly across the rail nearest the entrance with a pen and stack of papers set the tone. There aren't enough customers to keep 65 taps of craft beer fresh, and two bartenders with no one else to serve were snippy. After bringing our beer, the server happily returned to carefully study the house copy of a mugshot magazine. MARTIN CIZMAR. 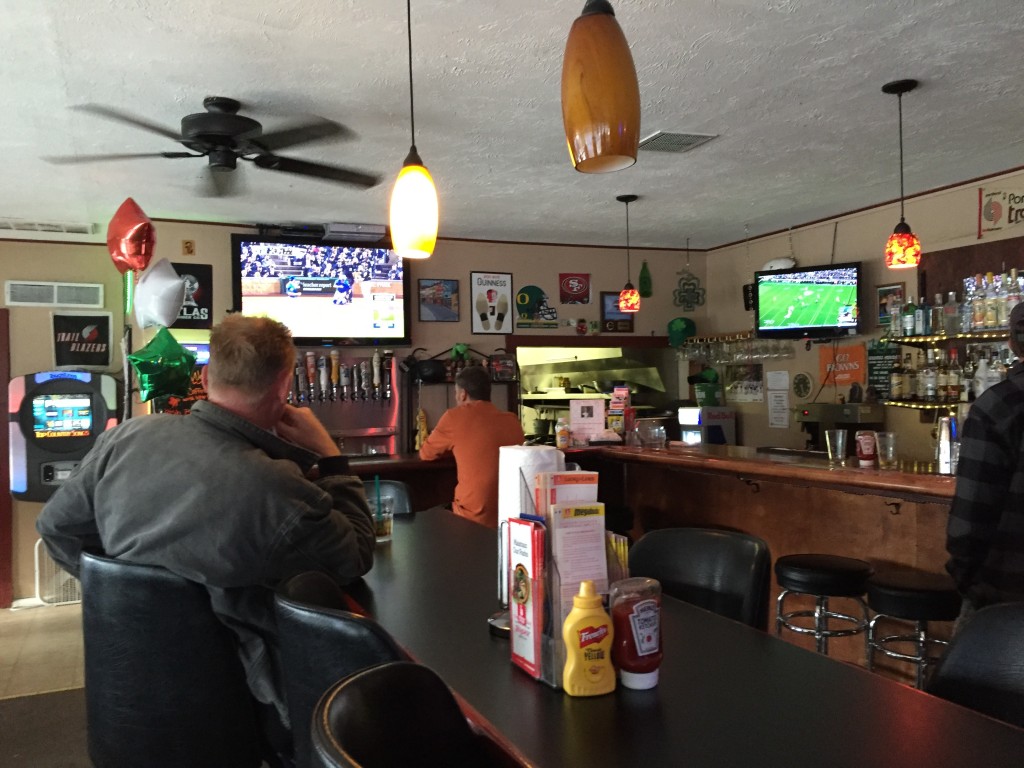 There are two distinct ways a bar can be nondescript.

The first: when a bar is vaguely hip, arguably modern and totally humorless. Walk the streets of the Pearl and you'll see what I mean. The second way a bar can be nondescript is when it intentionally gets the fuck out of the way and lets the guests have a good time by relying on dirt-cheap drinks, instead of elaborate branding concepts, to attract customers. Duffy's Irish Pub belongs to the latter group.

My memory of Duffy's centers on our conversations: Editors argued about Snapchat and Tinder and other Gen-Xer fascinations while we interns attempted not to embarrass ourselves in front of our bosses. I was unsuccessful at this. (As it turns out, my eyes are hazel. That's what you call brownish green eyes.) Drink a Guinness on draft, not because Duffy's is an Irish pub, but because Guinness is only 4 percent ABV, and by this point you will be pretty buzzed. ZACH MIDDLETON. 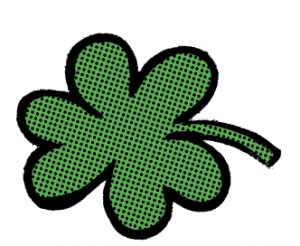 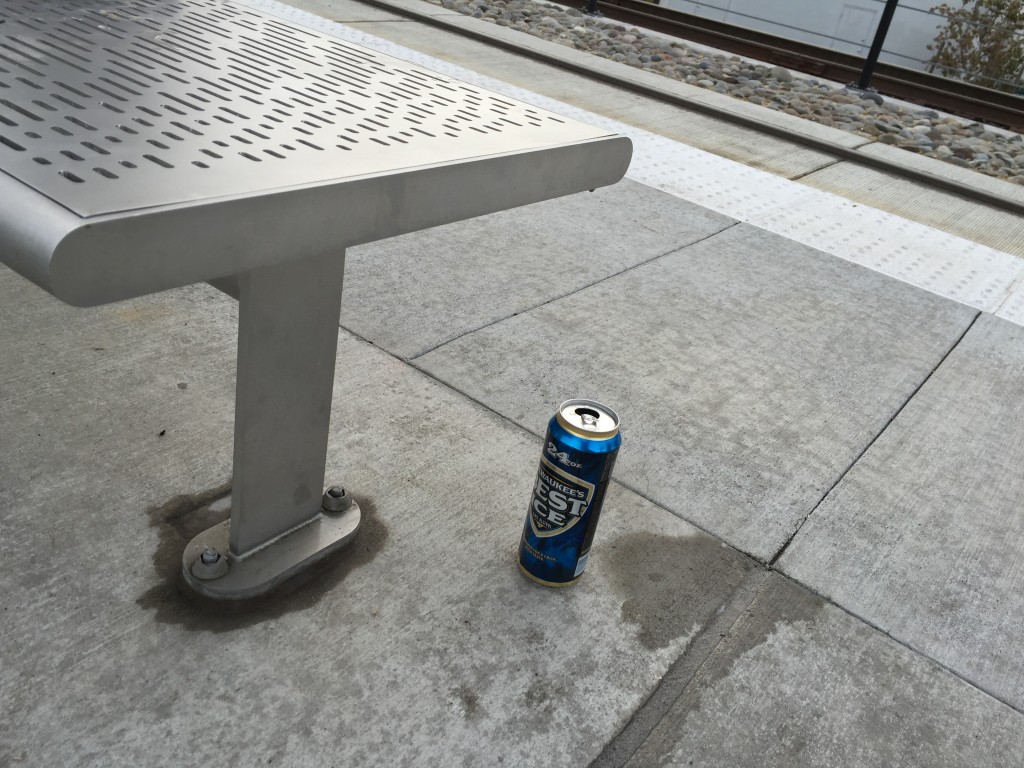 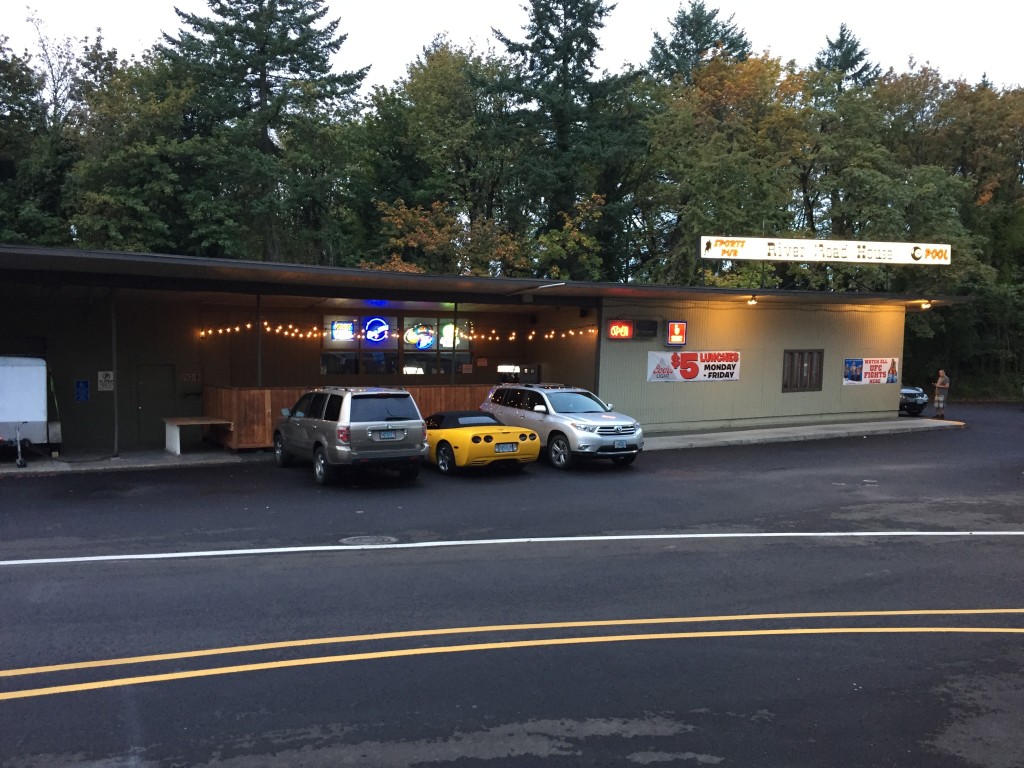 The end of the line is no place to find a bar. There's a 7-Eleven and nothing else unless you go south to a Bomber diner full of World War II nostalgia. The nearest actual tavern is a long trek back north along 99E by the Kellogg Creek swamplands, at the place where the sidewalk ends by the old waste-treatment facility whose smells still seem to linger. The River Road House, a 1970s lean-to of a place whose sign sports Pee-Chee-style silhouettes of generic athletes, was a place I romanticized when I was 12, when my family ate next door at an Italian restaurant that is now a support pole for the MAX tracks. The Road House always had motorcycles parked out front, and I thought it was a gritty biker bar full of outlaws. Who knows, maybe it was. But these days it is an impossibly polite wood-paneled sports bar with blue-felt pool tables so clean they almost shine, a decent craft tap selection, and interior signage supporting both Ducks and Beavers, both Michael Jordan and Alex Rodriguez. It's the sort of place where people you don't know save your seat for you, and where no amount of goading from our table could shake the fundamental good nature of a Cubs fan, who seemed bewildered that non-Cubs fans might even exist. It's a friendly place, but a profound disappointment to the dreams of my youth. MATTHEW KORFHAGE.