The Dockside Saloon Will Live Forever In A Slot In This Building, Just Like the House In Up

Finally, Portland development that everybody can get behind

The Dockside, apparently, is forever.

We have often lamented the loss of old bars with shared community history in these pages, and new development has put a lot of people on edge about losing Portland's aged and beloved things.

Well, this before and after proposal shows something entirely different—new and old in somewhat cheerful coexistence.

The Field Office is a newly approved 6-building office and retail development on Northwest Front and 17th Avenues built with recycled wood, upper-story trees and pillars made to receive ivy—a multi-building nod to "contextualism" designed by Hacker architects. 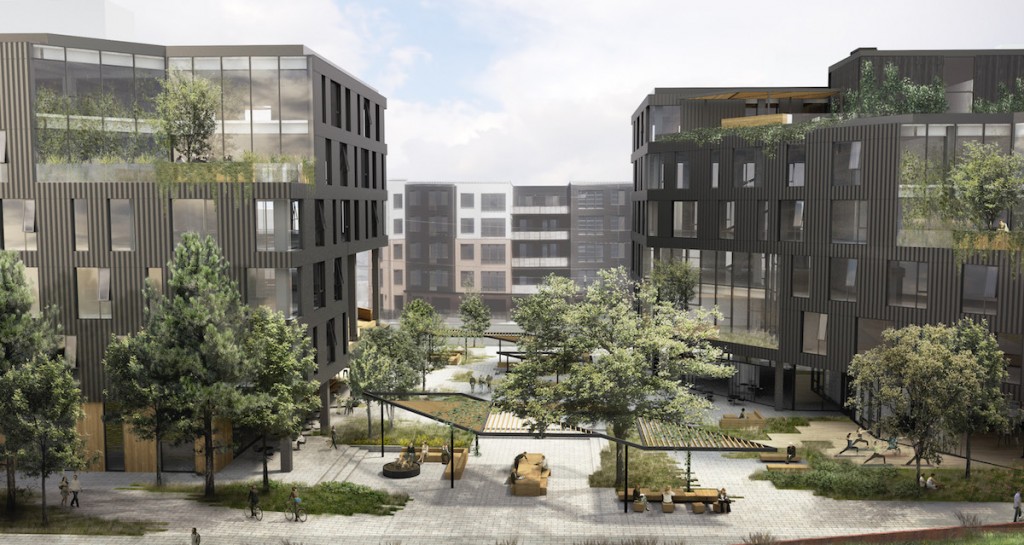 The development will horseshoe around the 90-year-old building housing longshoreman's hang-out Dockside Saloon as if the Dockside had a forcefield around it.

"The Dockside will stay exactly how they are," says lead architect Stefee Knudsen. "We're not touching it, we're staying away from it to the best of our ability, to accommodate this historic pub."

The Dockside is a 30-year-old blue-collar bar and bacon-and-eggs diner, serving workers of multiple shifts with before-work omelettes and after-shift drinks, with a white-collar office lunch crowd in between.

The Dockside's menu bears witness to greater historic significance: "Our real claim to fame," reads the menu, "was the finding of the Tonya Harding garbage that was to be the downfall of the Olympic skater."

Tonya Harding's husband, Jeff Gillooly, had tried to use the Dockside dumpsters to dispose of written evidence of the conspiracy to kneecap Harding's 1994 Winter Olympics rival, Nancy Kerrigan—but Dockside owner Kathy Petersen caught him doing it and turned the trash over to the FBI.

"The Dockside was not on the table," says Jonathan Ledesma at developer Project. "I wasn't interested in purchasing it. I believe they were approached in the past, by the people that we acquired the property from. There was a situation in Seattle—I don't want someone to look at the Dockside and say, oh, those developers couldn't acquire it."

Ledesma says they carved out extra space along the lot line to give the bar some breathing room, and have been in constant contact with Kathy and Terry Peterson, Dockside's owners.

"It reminds me a little of the skyscrapers built around the little house in Up," Knudsen says. "But I hope we're accommodating it better with the design."

The Dockside opens at 6 am each and every weekday. Among the many dishes named after Portland-area bridges, we recommend the West Linn. It costs a mere $6.95 and comes with two small pancakes, two eggs, and two links of sausage or two strips of bacon.