Oregon’s flagship beer was developed by a consultant and popularized by women.

Gary Fish was thinking small when he opened a brewpub called Deschutes in 1988. The then-31-year-old Fish had been in Oregon for only six months, and didn't intend to open one of the largest and most revered craft breweries in the United States. He just wanted to enjoy the beauty of Bend, open "a little pub" and "have a good life."

As a restaurateur with no experience brewing, Fish hired a consultant to create Deschutes' first three beer recipes. He then hired a young brewer from Portland to make them.

One of those three recipes created by the consultant was called Black Butte Porter. This Oregon-born porter became the first American dark beer to find widespread popularity in the U.S., and you can now find it everywhere from Sweden to Singapore. 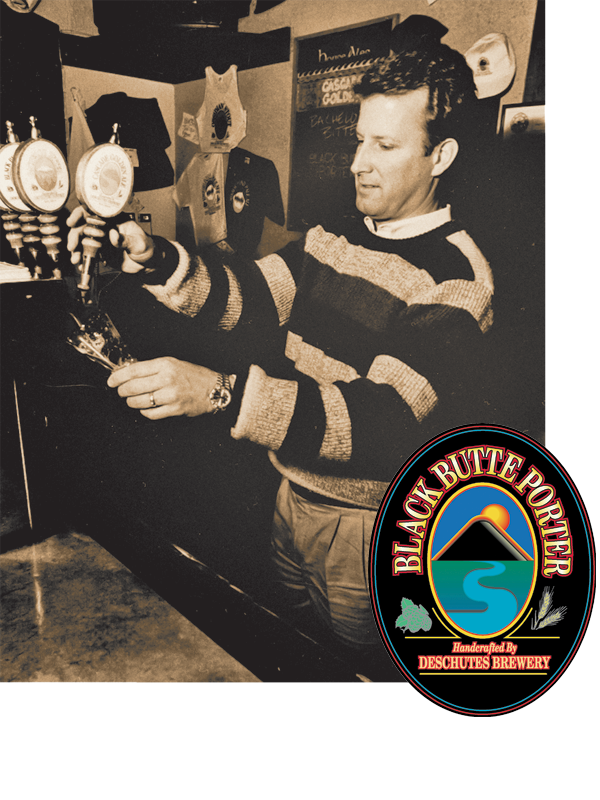 Black Butte's velvety smoothness has notes of chocolate and roasted coffee, plus a hint of sugary caramel. Four years ago, when we picked a flagship beer for the state of Oregon to compete against California's Sierra Nevada Pale Ale, Texas' Shiner Bock and Vermont's Magic Hat #9, Black Butte was our choice. And we would do the same today.

Here's the story of that beer.

John Harris, original head brewer at Deschutes and founder of Portland's Ecliptic Brewing: "Gary had hired a brewery consultant named Frank Appleton. Gary was a restaurateur, so he had the restaurant side all dialed up, but he had no idea about brewing."

Gary Fish: "Frank set up our brewing system and formulated the three original beers: Cascade Golden Ale, Bachelor Bitter and Black Butte Porter. In our original business plan, we were just a brewpub. But we did think there were three resorts that we wanted to wholesale beer to: Sunriver, Mount Bachelor and Black Butte Ranch. Naming them like that was a way of marketing them. When [people] came down the mountain after a day of skiing, they'd want to stop by our pub."

Harris: "We brewed the consultant's rough recipe for Black Butte, and I felt it was just way too light. I wanted to see a lot more roasted flavors in the beer, a lot more character in the beer, and so on. The consultant was like, 'I'm leaving, so do whatever you want.'"

Fish: "I was pretty well up to my eyeballs trying to keep the restaurant afloat, and managing everything else that was going on there. John really managed the responsibility of producing and improving the beers."

Harris: "I had been brewing at the Hillsdale brewpub of McMenamins until the previous spring. I had two years of experience. In 1988, that was, like, a lot. So I upped the chocolate malt and added a little more caramel malt, because it was more like a brown ale. I did those initial tweaks on the second batch, but we continued to tweak the recipe over the next couple years. I don't think the beer has changed a whole lot since."

Fish: "Really, it started to grow when we got a phone call from Jim Kennedy at Admiralty Beverage saying there were some tavern owners who had been through Bend on holiday and wanted to sell our beer in their stores. We said, 'Sure, we'd love to, but we don't have any kegs.' So we went out and got some old, beat-up kegs, and all of a sudden we were in the wholesale business."

Chris Hodge, the first employee at Admiralty Beverage and current CEO of Worthy Brewing in Bend: "I had basically spent four years prior to falling in love with Black Butte Porter drinking beers from Germany, Belgium and England, so my palate was accustomed to drinking the finer beers of the world. When I tasted Black Butte Porter, it was so reminiscent of all of the beers that I had fallen in love with."

Fish: "At the time, I remember sitting down with Jim [Kennedy], and he really loved the lighter beers. But he said, 'Look, you've got this beer that I just love: Black Butte Porter. You can fight for your share of the much-larger, lighter-colored beer pie, or you can go for the smaller pie and pretty much own the whole pie.' That really set my kind of contrarian business ethic."

Chris Sarles, former president of Alehouse Distributing, which distributed Black Butte Porter in Washington, and current CEO of Oregon Fruit Products in Salem: "To say you are going to put your flag in the sand with a dark beer, certainly I know I scratched my head for a moment thinking, 'All right, I'm in, but I am not sure there shouldn't be a lighter-style beer too.'"

Hodge: "In sales, you always want to have something that is different from the competition, and if it's good, that's the double whammy. It was a category-breaker for a lot of people, and I credit Black Butte Porter with being that sort of leader in getting people to think outside of the fizzy yellow-beer category."

Jeff Alworth, author of The Beer Bible and the Beervana beer blog: "Who knows how significant this decision turned out to be. Maybe if Gary had gone with the Golden, Deschutes would now be a modest-sized brewery. We only know the history as it was—Deschutes got off to a great start with Black Butte, was partly responsible for popularizing dark beers in Oregon, and launched itself on a trajectory to make it one of America's largest craft breweries by 2009. History is a capricious lady."

Once the team at Admiralty got Black Butte Porter on the market, it became popular, especially with women. It quickly became a staple of the craft-beer industry, in large part because of women.

Hodge: "At that time, a lot of the microbrew world was sort of misunderstood. The McMenamins had done a good job of getting people to fall in love with handmade beer, but what the Widmers and even more so the guys at Deschutes did was get people's heads, hearts and minds around a truly full-bodied product."

Hodge: "What we found was that women had highly refined palates, and a lot of them had never had beer that really tasted that great."

Fish: "We would do festivals all the time, and all we would do is get people to come up, particularly women—talk about a group of people who thought they didn't like dark beer—and they would order the lightest thing we had. We'd say, 'I'll give it to you, but first I want you to try this,' and we'd hand them a sample of Black Butte Porter, and I would act like I was going to go pour their beer. We figured we were at about 80 percent conversion rate, where they would drink it and say, 'Hey, this is great, I'll have one.' It has really grown substantially because we tapped into that customer base."

Sarles: "It really became Black Butte Porter for dark ales and Widmer Hefeweizen for paler ales. For us, it was our one-two punch."

Deschutes started bottling Black Butte Porter in 1994, and it remains among the company's best-sellers. Aside from small recipe tweaks, the beer remains unchanged to this day. Deschutes produced 310 barrels of beer in 1988; in 2015, it produced 343,689. Fish credits the perfect balance of the original recipe.

Fish: "It really does have the depth and complexity for a very sophisticated beer palate. The more you let it sit in your mouth, the more the flavors sort of reveal themselves, really like a fine wine. Even though it is technically a very dry beer, it still comes off as slightly sweet. It's not overly astringent or bitter. It's mouth-filling and round, but it doesn't lay heavily on your palate. I think we were able to accomplish those things in a way that has enabled that beer to transcend the time since it was originally created."