Portland Trader Vic's Is Closed After a Fire—Maybe Forever

Poor profits made it unfeasible to do repairs, writes a manager at Vic's.

Legendary tiki bar Trader Vic's is closed in Portland after a fire March 2 burned through most of the bar's ceiling.

And according to one of Vic's managers today, it may never re-open. 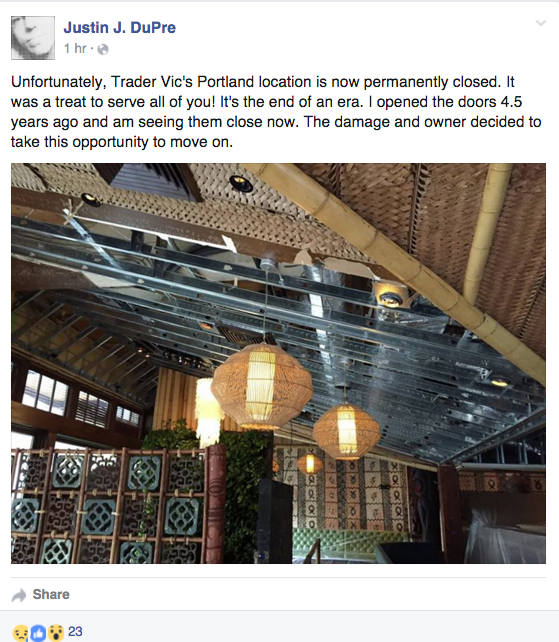 According to Trader Vic's, the fire began in a medical office above their bar, and burned through the floor into Vic's. 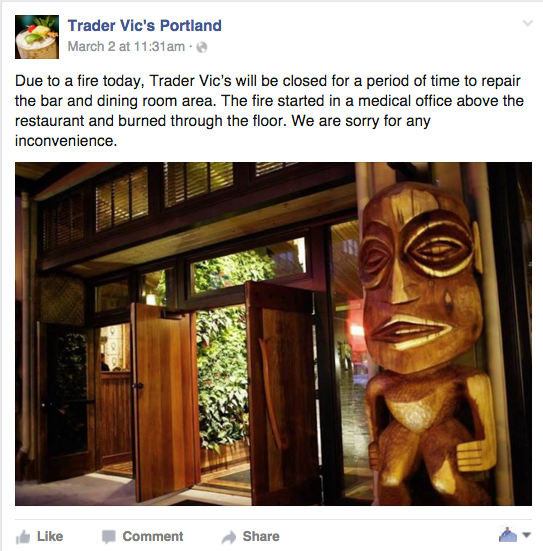 The Portland Trader Vic's is one of the last outposts of the legendary tiki chain in the United States, aside from the old-school 1972 San Francisco location and the one in Atlanta.

Portland had a Trader Vic's from 1959 to 1996 inside the Benson Hotel before finally giving up the ghost as swinger and tiki culture waned. In 2011, publications around Portland—including our own—ballyhooed the vaunted tiki chain's return to town.

According to DuPre's public post, the reason isn't so much the extent of damage—which would have been covered by insurance—but the poor profitability of the vast Pearl District location at current rent prices (DuPre has since removed this posting from his Facebook page, and says he did not realize he had posted this information for the general public): 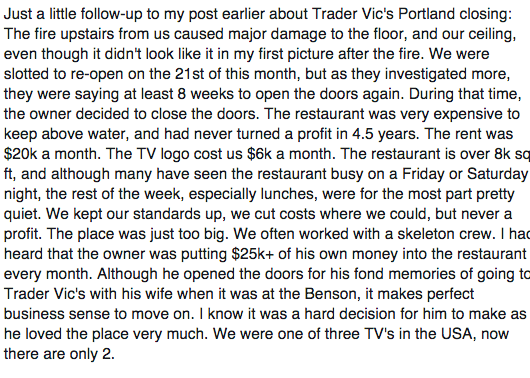 We've left messages with the Trader Vic's office, and will update information as it becomes available.

On DuPre's page, Blair Reynolds—owner of Hale Pele tiki bar on Broadway and the soon-to-be-opened Americano inside the Burnside 26 building, offered a small ray of hope for tiki-lovers hoping for the return of west-side tiki.

Here was our review as the tiki spot opened in 2011: