The new wave of shops knows how to butter our bread.

Providore Fine Foods secretly contains one of the finest day-drinking spots in the city. Specifically, at the Flying Fish oyster bar you can get beautiful $2 Nevors from Netarts Bay, expertly shucked, any time you want—alongside other straight-from-the-oyster-farm varietals. Most restaurants in town source from Eat: An Oyster Bar, but Flying Fish gets its own oysters, directly from its own sources, so expect the unfamiliar and sometimes wonderful. Meanwhile, you can grab a beer from Flying Fish or the fridge case, but there are Buoy and Pfriem taps in the backroom wine section, where half the time they'll give you a free wine tasting while you get a beer. What a wonderful world. We drink in the grocery store all the time now.

"Enjoy a glass of beer or wine while you shop!" reads the sign. It is perhaps the most wonderful sign in all of Portland. At pan-ethnic Pearl spot World Foods Market, there is a neutral-toned elbow of a bar curled around the only coffeemaker in Portland wholly devoted to Olympia Coffee, with taps pouring $5 pints of Heater Allen Pils, Breakside IPA and Pfriem CDA, not to mention $6 wild-fermented and apricot ciders. The wine selection, meanwhile, is four deep and lovingly chosen. There's a whole grocery store of food to choose from if you want to eat at the bar—including a deli case chefed by Ya Hala's Mirna Attar—but you can also just shuffle through the aisles with a beer in hand, mumbling obscenities at the cheese.

The Green Zebra beer guy—Steve, we're told—has done his homework. At this brightly twee, blue-and-white four-seat bar and growlerie, you'll find one of the more pleasant beer selections in town: $4 for a pint, $12 for a 64-ounce growler of the Commons Myrtle, Engelberg Pilsner, Buoy IPA, a Breakside bergamot bitter seasonal and a sour from nearby Culmination. Just watch out for those wine growler prices. Green Zebra hasn't quite priced them out, it doesn't seem, so you're paying about double the cost. It's $35 for 32 ounces of A to Z chardonnay compared $15 for a 25-ounce bottle on the shelves. But at 4 pm, that ground-floor beer is quite the amenity for the Hassalo on Eighth high-rise apartment dwellers. 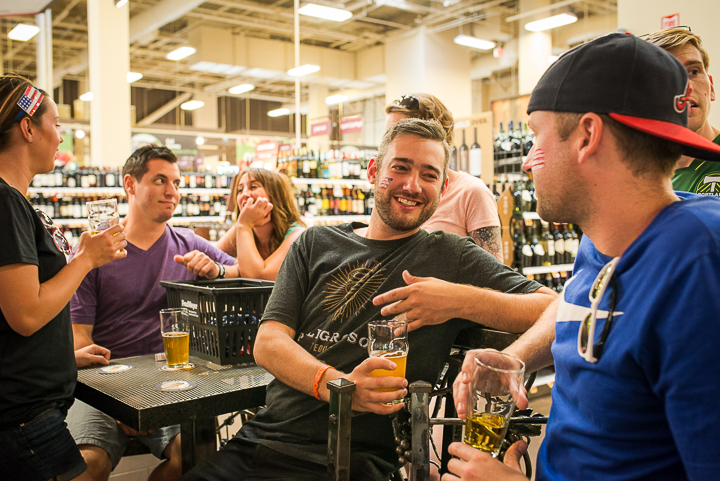 If you hang out at the little pub tucked by the deli inside the newly remodeled Stadium Fred Meyer on West Burnside Street, you're going to be filled with the spirit of generosity that comes from beating the system. The Fred Bar (our name) has been open since late 2014, and it has pretty much everything you want before a soccer match. The bar has 12 stools, with Elvis Costello's "Radio Radio" playing from a stereo, and a handful of Timbers fans milling about. Behind the bar are two TVs showing soccer, a handful of beer taps and a long lineup of wines available by the glass. Just bring cash to tip, and flout the crappy grocery store policy against it.

At the little Mt. Hood Meadows retail store on Northwest 17th Avenue, there are a couple beer taps and a little wine—just four bar stools and a basket of nuts, plus tacos across the street from the Nuestra Cocina Frog Town taco cart that quietly spun off from the Division Street restaurant. At first blush, it doesn't make sense to have a bar inside a small shop that isn't trying to soften buyers for big-ticket items. But it comes with a built-in sense of community. Stop by, and you'll see people who know each other from the mountain chatting about Monday's snow dump and conditions at Superbowl. Beer, conversation, tacos—what else do you want in a bar?