Weed and Strippers in East Portland

Our favorite dispensaries and strip clubs in the Numbers

Pitiful Princess brings the drama. Not only are moralizing Oregonian writers obsessed with the place—it's weathered brutal columns from heavy-hitters Anna Griffin and Steve Duin—but it also has some issues with professionalism and/or workforce morale. "I thought those bitches were my friends, and then they pull this shit," the bartender explained to the gentleman on the stool next to us. "But I threw that fucking cunt out of here, and just texted her and told her not to fucking come back." The bartender, herself a former dancer, showed her Android, and I can confirm that she said exactly that. Get past the name, and the dancer drama, and Pitiful Princess actually is a pretty pleasant hangout. It vaguely channels the basement from That '70s Show through wood paneling and a pool table. All music played is contemporaneous with Marcy Playground, which probably makes it oldies to the Saturday-night dancers. Those dancers are young and not especially practiced in their craft, but the beer's cheap and the vibe's chill. Compared to some other clubs we visited in East Portland, it might as well be Mary's. MARTIN CIZMAR.

If East Portland has a Magic Garden (R.I.P.) or Sassy's, it's Club 205. The cocktails are reasonable during regular hours ($6 Maker's!) and insanely cheap at happy hours ($1.50 well vodka and drafts till 5 pm!). The front section might as well be any dive bar in Portland—a rail of wood staffed by no-nonsense vets who favor regulars with their pours and lighten up on drunks, the food fried and decent. The main room is a triple-stack of octagonal stages of varying sizes—two with poles, one with a swing—with tatted and pierced dancers heavy on upside-down pole craft, small talk and the ability to extend most of their body beyond the stage. When you walk in, even if you've never been, your cockles are warmed by the sense of the familiar. Here you are in Portland—so much Portland. MATTHEW KORFHAGE.

Mystic strip club and its adjunct dive bar, Falco's, have been the scene of so much tragedy—shootings in the parking lot, a security guard shot within, a woman driven to a Fairview lake and killed—it sort of pervades the air a little, with a memorial shrine to the fallen on Falco's bar. While Mystic is like a dive-bar version of a gentlemen's club—club bangers, a haze of neon and high-priced drinks, heavy tats on dancers that tend toward the skull-and-full-back-spider-web variety—Falco's is a tight-knit, community-minded pool dive with a couple tables and a few sports screens, serving strip-club steaks at strip-club prices ($5 cheap!). "Home of the Cheap Date," says the sign, right next to the club that's home to the expensive date. MATTHEW KORFHAGE. 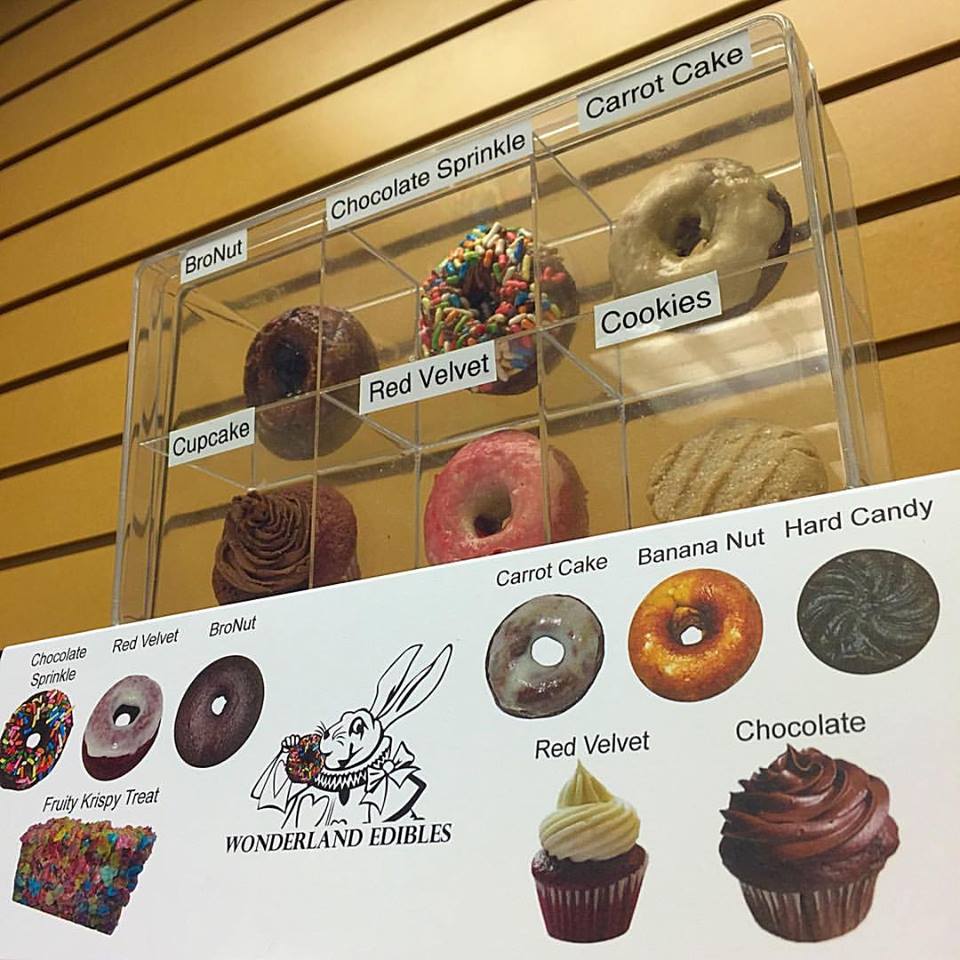 Ascend is hidden in the corner of a nondescript strip mall along Portland's Green Mile, and thus easy to miss. It's not a spot for tourists and looky-loos—it's popular with neighbors and the blue-collar workers in the nearby industrial zone. Ascend's longtime partner Toke Joints teams with it to sponsor locally run cannabis-industry events and, naturally, provides the shop with among the best joint selections in town. High-CBD strains and clones are available, but the latter tend to disappear quickly. Credit cards are accepted without transaction fees. TYLER HURST.

Starting on the day this piece publishes prints (June 15), high-volume eastside dispensary CannaDaddy's will be moving into a massive new space pretty much across the street, at 17020 SE Division St.—opening as soon as June 19, according to staff at the current store. So the sparkling clean store will move its current two walls of weed into a much vaster, 6,500-square-foot space with a whopping 10 registers. And to choose among the store's 100 strains, visitors will have access to the entire Leafly library in the reception area on iPad screens, to winnow down their needs before talking to the budtenders within. SOPHIA JUNE.

From the street, it's impossible to determine whether this dispensary is open, and the ambiguity isn't cleared up once you're in the waiting room. There are no chairs, signs or people to greet you when you enter, just a wall of bulletproof glass through which you'll eventually offer your ID once someone has come back to check if there are visitors. After you've gotten through the DMV entryway, you'll be ushered into a dark, space age-y interior. Budlandia offers anywhere from 25 to 30 strains at a time, most of which are sourced through Ripped City or Ring of Fire, and the staff seems genuinely excited to talk about the flower on hand. The prices are reasonable, and the selection is adequate, so don't let the creepy entrance deter you. GRACE CULHANE.

Nectar may be the Fred Meyer of Portland weed, but the 122nd Avenue location is more like Fred Meyer's country home, with a little walk leading to a red-painted house that looks a little like a log cabin—with a much more modern store within that includes a sculpture of what the baby might look like if a cheetah fucked an elephant. As at other Nectars, pre-rolls fly off the shelves here, as do the weekly BOGO eighths. It's tough to recommend any one thing, because the Fred Meyer of Portland cannabis shops' greatest strength is its menu. This is the place to go when you're not sure what your out-of-town friend really wants. TYLER HURST.

When your GPS app indicates you've arrived at Five Zero Trees, you'll probably think it's a joke. Masking the dispensary from street view is Blessings, a massive Christian resource center. But have faith and drive in anyway; salvation is just across the parking lot. From the outside, Five Zero Trees looks like the backside of an abandoned Party Depot. But inside, it feels like a seaside spa, with walls made of dark wood planks with light-blue chipped paint for a manufactured vintage effect, dim lighting and a wall full of clear glass. I half expected my budtender in Princess Leia braids to offer me an eyebrow wax with my $2 white chocolate raspberry edible. The dispensary, which opened in 2013, is mainly medicinal, but the pot connoisseur will also feel at home, with 50-plus strain selections, predominantly from in-house growers. Five Zero Trees is known for its high-end BHO, which goes for $50 a gram. But for a more casual experience, the pre-rolls are huge and a bargain at $25 for three, and top-shelf recreational goes for $13 a gram. SOPHIA JUNE. 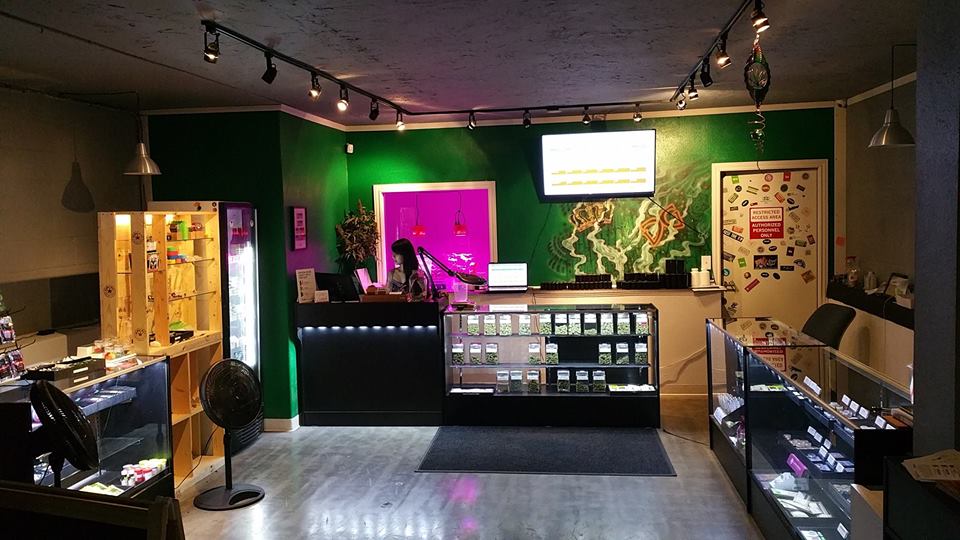 Oreo-ed between a Plaid Pantry and a sushi joint, this dispensary has more to offer than Google Street View suggests. Inside the wide-open budroom is a fat selection of glass, two flower stations, an edibles fridge, and a clone cubby. Did I mention it feels like an underground lounge? I spied a bong with a Smokey Bear logo on the neck and couldn't help but giggle. I was happily surprised to find the elusive chronic variety Snoop's Dream and snatched it up. Green Gratitude also has high-CBD flower varieties. I strolled out of the place with one called Happy Medium in a damn fine pre-roll. K.C. SWAIN.

Head East head shop is a family affair—started first in 1976 by Robert Smalley and then continued by his son Paul, who hung out there growing up. The checkerboard-floored shop bears the imprints of its long history with items that stretch back years, glass from all over (including a blower in Smalley's own shop), hammocks, jewelry, figurines and Rastafarian garb. Lately, it's selling a lot of nouveau herbs like kratom, not to mention plenty of hookah shisha and out-there glass like a light-up pipe with sculptured eyes opening from nonspecific biology. MATTHEW KORFHAGE. 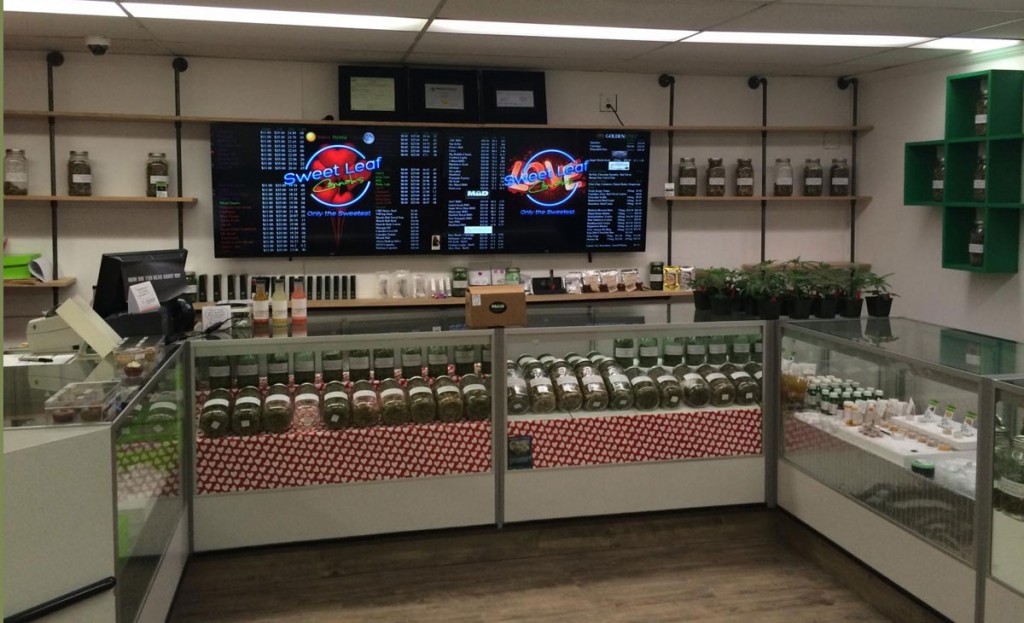 On a far corner of Division Street, in what looks like an In-N-Out that's been whitewashed, Sweet Leaf will show you what a dispensary should be. The best items for sale include discounted five-packs of assorted pre-rolls (why doesn't every shop do this?), Golden Xtrx THC dabs, and a glass selection almost unrivaled at other Portland shops. Want to smoke out of a bacon-shaped pipe? Want a handmade piece shaped like a beagle that is more fine art than drug paraphernalia? Across the huge, minimalist room, a colorful retail rack looks straight from American Apparel and stocks beanies, a hot-pink tank dress, and branded tees you'd actually wear. Surrounded by potholed roads and fast-food joints, Sweet Leaf is like an Apple Store of weed, with the minimalist aesthetic and iMacs on the checkout counter to prove it. ENID SPITZ.

Why We Devoted an Issue to East Portland

Shopping the Ethnic Markets and Weird Specialty Shops of the Numbers

The Coolest Nightclub in Portland That Doesn't Even Serve Alcohol

Where to Find Your Favorite Chef's Favorite Tacos

The Mysterious Butte With a Sordid Past

Our Favorite Bars in the Numbers