As Old Portland begins its second week of existence, he sat down with WW to uncork the origins of his thirst and let spill some vintage tales of urban bohemia.

Hidden inside an unassuming industrial warehouse within darkest Slabtown lies the infamous lair of the Dandy Warhols. The Odditorium has encompassed the band's principal recording studio, rehearsal space, banquet hall, and cheekily-posh den of iniquity for more than a dozen years while lending succor to a murderer's row of touring icons. And now, as singer/songwriter/Bohemian-In-Chief Courtney Taylor-Taylor readies wine shop and bar on premises, they're letting it breathe.

Related: The Dandy Warhols Are Opening a Bar in Slabtown

Towards the end of summer, after assembling furnishings from dearly-departed or aggressively-remodeled fave haunts, Taylor-Taylor and friends transformed the facility's former offices—traditional eye of the Oddy's afterhours storm—into a sorely-needed neighborhood boîte where patrons may sample the fruits of the veteran frontman's rigorously-cultivated palate.

As the Old Portland begins its second week of existence, he sat down with WW to uncork the origins of his thirst and let spill some vintage tales of urban bohemia.

Courtney Taylor-Taylor: Well, mostly, because I grew up reading classic novels, and, in 19th century literature ‎wine seems like such a dreamy poet's high. Of course you always want to like wine.

I didn't really go for the Napa thing, though. The first wines I ever tasted were late-90s Napa cabs, which are really expensive fruitbombs.

What about the local wines?

I remember – our first big year, maybe '94 – seeing them for the first time in stores around Hollywood. My band was down there playing gigs, and somebody said that Oregon pinots were becoming a real big deal. And I thought that was bizarre.‎

Then, when the Dandy's started playing Madrona Hill Winery, we were drinking a lot of wine. For five bucks, they would just sell an entire bottle of Cab Sauv with no label. That was nuts. That was a lot of drunk kids. Classic old school Portland shit …

I don't like spending a lot of money on wine, and I don't think you need to. I just wanted a place that would feel comfortable coming in to hang out without the quote-unquote wine bar experience. I also have very specific tastes in wine.

I don't want an explosion of interesting flavors in my mouth. I like soft and velvety. No one will tell you what's velvety and deep and beautiful. They have different words so I've had to find it myself. It doesn't have to be expensive, and it doesn't have to be cheap. It's just what I've found after traveling the world and drinking about a bottle a day over the past two decades.

Good for the heart.

Yeah, and it's good for the mind. And the disposition, when dealing with tour. Every day that you look out your hotel window at a grim endless grey and go … that.‎

Then, you think for a minute, look over at the bottle yer gonna drink today, and go…well—there's this!

For real wine, it's France and Italy. I like old world wine. That's just how I'm set up.
‎
Old world for the Old Portland…

Well, y'know, back in the old days, if you went to L'Auberge or the Veritable Quandary, there wouldn't be much (or anything) from Oregon on the wine list with any age on it. And, I like older wines. So, I learned about these old French and old Italian wines.

I think it's great that a lot of people like really interesting bottles, but not me. I want softer than water. I want a very subtle, interesting, beautiful thing to happen. I don't like excitement in my wine. And, so, I've devoted a wine shop to exactly that. 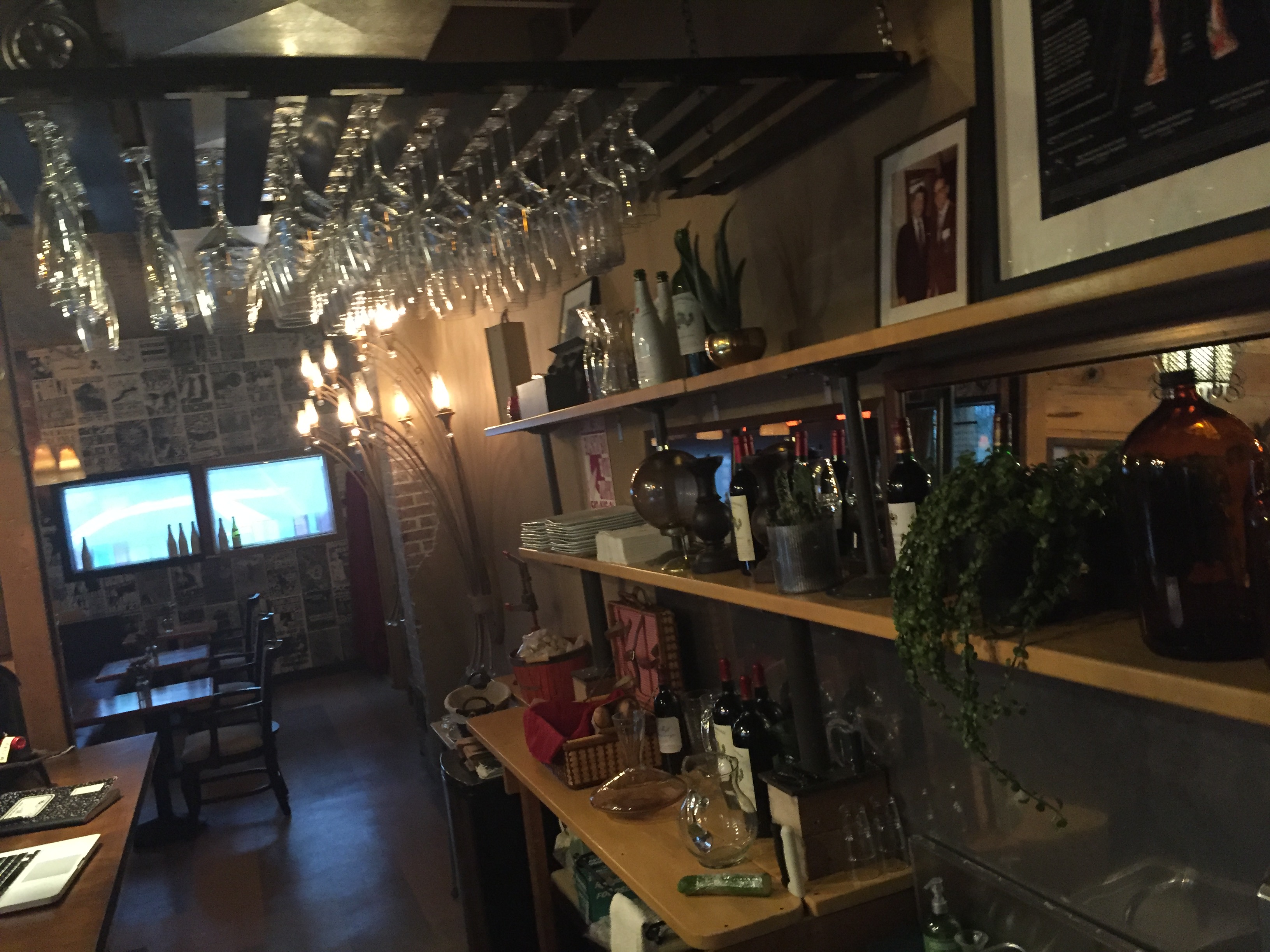 ‎
When did you start the Odditorium?

Around 2001 or 2002. It was a machine shop, and we built up different spaces around where they had overabundant electricity. This [Old Portland] was their wet room. There were two sinks behind a giant window, which became the 'bar'. We didn't have to move any walls. And, after partying here for 15 years, it just felt natural to leave it.

For the first party here, we had the Strokes, the Vines, Jet, and Danish band, the Raveonettes. I bought cases and cases of random wines. Dustin Gettman [Pok Pok NYC, Saraveza] was cooking seven courses. Timothy Hutton was playing one-on-one with our friend Highway. And, it was like, 'Dinner's in an hour, boys 'n girls!' We knew it was game on after that.

At one point, [Strokes guitarist] Nick Valensi, who just happened to be in town this week before anyone even knew we were open, turned to me at the table and said 'this wine is amazing.' It was a 2001 Gigondas, which was my favorite too. He was a wine guy, and, for the first time, I started to suspect that I might have a 'specific sort of palate.' It didn't take long before John at Great Wine Buys told me I had the palate of an old French man. [nodding] well okay, then.

We still occasionally have Gigondas here. I just had a bottle at lunch the other day, a great 10-year-old, and that's not an expensive wine. Money isn't as important as knowing what the words mean in order to find one you like. The first words I learned to say were Chateauneuf du Pape. They still work pretty much every time.

I don't go to wine bars very much. They seem snobby and ultimately uncomfortable. That and professional sommoliers usually just confuse me.

When did the idea for the bar come about?

I mean, obviously, we've been drinking in these rooms for eons, but‎ when the roof caved in last October, we had to start remodeling and pulling shit out. One room led to the next, like, 'If this is under these walls, is that under those walls, too? Let's just take a peek.'

I guess the idea to make it public came after we realized that we hadn't used this part of the space for, like, three years. We have access to the sidewalk – so, 'Great, put locks on the other doors, and let's make a wine bar.'

Right now, on the other side of the wall, is the Dandy Warhols merchandising world. One day, we'll have our own sound system, but we're sort of subjected right now to music controlled by the girls and boys who do merch. So far, it's been Astrud Gilberto and Stan Getz or Edith Piaf at the wine shop, which works perfectly.

Any trouble with the neighbors?

That looked really scary for a while. The most horrible things happening to the city are the results of overpopulation: condos, all-day traffic jams, great old buildings demolished. I swear these cheapy, tacky condo boxes are fucking at night and birthing more ugly little condos.

Fortunately for us, the developers next door were shockingly cool and helpful once they understood what this place represents. I mean, for over a decade, all sorts of touring bands, international celebrities would come here to chill out and do whatever the hell they wanted. It should be on the rock historic registry. I'm glad that means something to them.

Now, this is the first time that we're opening up a fraction of the building for, y'know, Portland people to come in and hang out where Bauhaus has sat and written songs.

Will you have live music?

Maybe. I mean, we'll figure it out. If a winemaker wants somebody to play for a vertical tasting or whatever, I'd love to have that kind of thing go on in here. Of course, I'd want to be invited. [chuckle] And, help pick any musicians that we'd be listening to all night.

It's not a bar. It's not a restaurant. It's a wine shop, mainly, with amazing old European wine that nobody really specializes in.

We only have one thing by the glass for red, and that's a 12 year old Haut-Medoc for $12. If you want white, you get bubbles – a non-vintage Brut is the house champagne right now.

We've got a couple of old Oregon wines. We have a couple old California wines. Mostly, we have different levels of grace or elegance. Lots of older Claret is the mainstay.  Our cheapest bottle is $40 for a seventeen year old Bordeaux. Or, if you really wanna throw money, we have a $1,000 bottle of wine for you.

The '94 Mouton Rothschild. It's not regarded as the best year, but it's my favorite because I don't like very sweet wines.‎

Do you have food?

Right now, there's just one thing to eat – organic radish with aged Irish Cheddar, soppressata from Provvista, baguettes from Ken's Artisan's bakery. We have a vegan and gluten free version too.

As we do business and people come for a little more to eat, we'll obviously try to do what they want. When we're ready to have more than just snacks, we'll have soups from Besaw's or Mother's Bistro or Blossoming Lotus, for vegans. [Chef Dustin] Gettman is a soup genius so i'll get Saraveza's in here too. ‎

They're all down. Everybody loves the idea of this place. And loves coming here. We've been open for a few days now, and it fills up but doesn't pack out—a very nice, chilled vibe.

Where did you find all the furnishings?

They came from old Portland.

Since the early 90s, the Dandy's have been collecting stuff from around town, and we've been putting it all in here. These [tables] are from the Lotus. That [back bar] is the MAC club. Those tables are from Wildwood. And we're waiting on and hoping for stuff from the old Besaw's.

It's also a museum for rock posters from the 80s and 90s. We decoupaged two of the walls with so many old posters: Sonic Youth at the Pine Street, Suspiria at Suburbia, the Lemonheads, Pavement…

I had an opportunity to get this daunting wooden wine display cabinet from the old Hilton wine bar. So, I asked my friends at McMenamins for their best salvage guys, and they pulled the thing out with kid gloves—all the glass intact, incredible job. It's the centerpiece now. If you want to preserve old Portland, move stuff from all of the old places, there's no one on earth that's better. They make legends stay alive forever.

What about that red velvet chair?

That has always been here – through a million recording sessions, film shoots, and, of course, parties. David Bowie's butt has been on there. Sylvain Sylvain's has been on there. We made everyone sit and pretend to be Santa when they were here in December. It's seen more ass than Hugh Hefner …

And the signboard outside?

I would have liked no sign at all—keep it very secret. Wouldn't that be great? Just have a cool place where people who like wine could go to, y'know, drink wine, eat snacks, listen to Chet Baker…

After nobody came, I decided I better have a sign. Even a somewhat scary one.

You're happy with how everything turned out?

It's such a clean and beautiful space, utterly devoid of design. After visiting a million designer restaurants and bars and hotels, it's just more comfortable to be where you can feel time stand still. I think this might be my favorite place on earth.

I love old wine. It's the poet's high. As far as I'm concerned, drinking wine is not about snobbery or pretension. It's as natural as breathing, like Ernest Hemingway said. 'And as important.'