Need to ship a tap-only beer across the country? Look for it to pop up on one of the 16 taps at this brightly lit, industrial spot on Division. Imperial has a counter-pressure bottle filler that tops up and seals your growler the same way the pros do it at the brewery. If you want one of the 400 bottles on the shelves right now, Imperial also has a wine chiller to get it cool in only a few minutes. 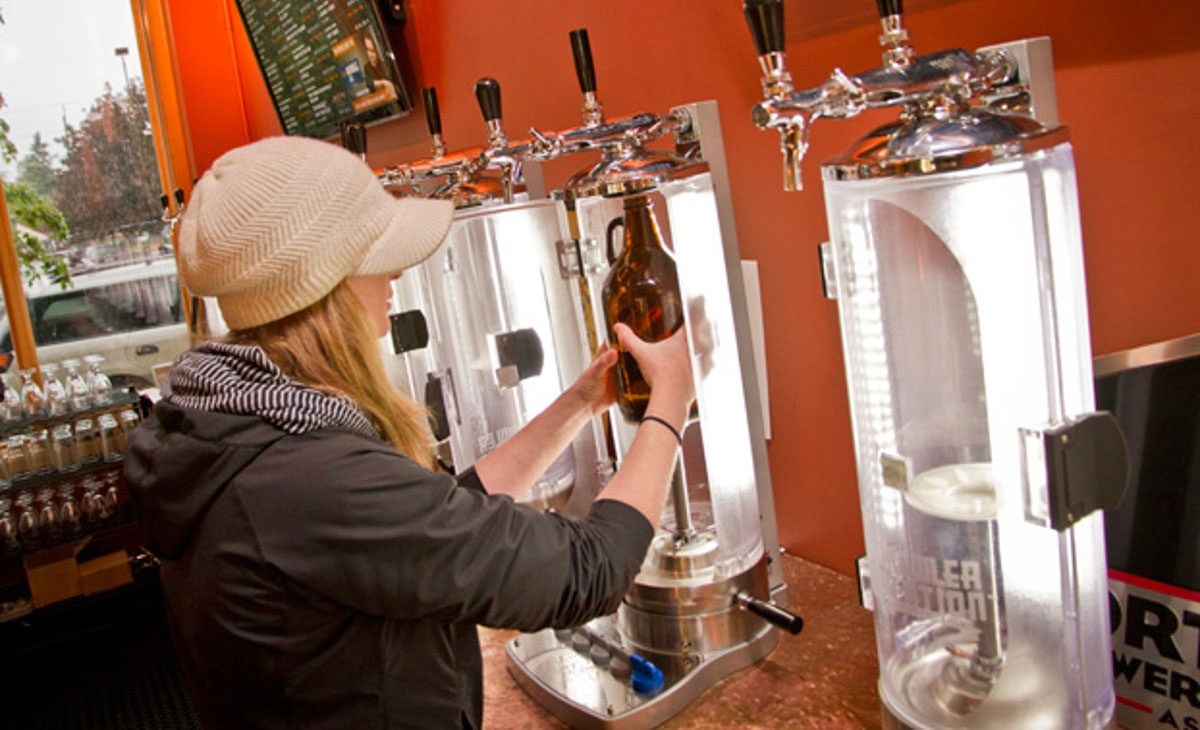 In the shadow of the newish New Seasons on North Williams, Tin Bucket is a tiny bar with an LCD tap list and reclaimed wood tabletops. The shop distinguishes itself from the pack with counter-pressure growler fills, which use pressure to keep your jug fresher longer. A constantly rotating selection of 40 draft beers and ciders, along with occasional house-exclusive brews from famed breweries like de Garde and Block 15, gives drinkers plenty to choose from.

You may notice MAX Yellow Line commuters look longingly while idled at the North Prescott Street Station, but Overlook's Untapped ranks among Portland's least-recognized beer bars. The sparse space is adorned with scattered picnic tables, bright signs and 38 taps. The selection isn't as well-curated as Tin Bucket's or Apex's, but you can get a seat and find Goose Island's Bourbon County two days after it's sold out elsewhere.

This small, sparse taproom sits in the heart of a Pleasantvillian faux-urban development plunked down in exurban Hillsboro. The tap list is surprisingly adventurous, including rarities from Ordnance and Crooked Fence, though it'll also pour Lost Coast Tangerine Wheat or Mac & Jacks.

This rapidly expanding sando chain started as a cart back during the Great Recession. The original West End brick-and-mortar is on the ground floor of Twelve West and, like the others, has an impeccable tap selection and frequently does special events and tap takeovers.

This rehabbed bodega is well-stocked with wine, cider, beer and, in a surprise twist, liquor. And though the liquor is all McMenamins', the beer and cider include well-curated guests from around the globe, like Traquair Jacobite Ale from Scotland, currently ranked the 20th-best beer in the U.K., and Bitburger Pilsner in a can.

A small Belgian-leaning bar focused on very nice things. Many are imported, including a $62 bottle of Oud Beersel Bzart Lambiek. Draft prices have dropped and include some real steals, like 12 ounces of Almanac's 9.5 percent ABV Quadrupel for just $5.25.