Make new friends, but keep the old. One is silver and the other's gold.

By Tyler Hurst and K.C. Swain

In the land of the stoner, Girl Scout cookie season is High Holy Days.

Anyone who's ever smoked a joint knows that weed pairs well with almost any cookie, but nothing is quite so sublime as the taste of a Tagalong and the feeling of empowering the next generation of women while simultaneously being high.

However, we are pros, and as such, we decided to experiment with taste, terpenes and cookie variety to see if we could make the perfect experience even more perfecter. Armed with a vaporizer in the basement of a private club, we filled bag after bag while chewing on four of the five most popular Girl Scout cookies, plus a gluten-free cookie no one should ever order, to determine which strain goes best with each cookie. We did it for you, dear reader. Only for you. 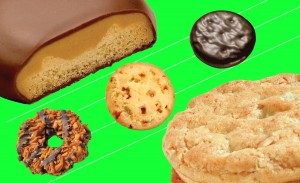 Samoas are chocolate and coconut combined in a way that we still think most kids don't like. Sweet and woody Hindu Kush added a sweetness that brought out more chocolate. We chose Hindu Kush for its tasty and stinky combination of sweet, nutty and earthy flavors. It made sense that the toasted coconut in the cookie would pair well.

Tagalongs are peanut butter atop a shortbread cookie covered in chocolate. The sweet lemon and spicy pine of Trainwreck neutralized the chocolate and spiced up the peanut butter—one tester liked it so much she called it her Ratatouille flavor moment.

When searching for strains to combine with this cookie, we focused our attention on varieties with a combination of sweet, nutty and chocolate notes. The most prominent taste in Trainwreck is its nuttiness as well as a sweet, almost lemon flavor. We wanted to mellow out the peanut butter and turn the sweetness in the chocolate.

Do-si-dos are oatmeal and peanut butter cookies made with four common allergens. Earthy citrus Jack Flash amped up the nuttiness. Its distinct sweet-and-sour flavor profile mellowed the richness in the peanut butter. At the same time, it made sense that the spectrum of sugary tastes would flow together.

Buttery Toffee-tastics have little pieces of toffee that taste just like the year-old cookies your grandma forgets to throw out. The pungent earthy woodiness of White Widow and Chocolate Cream smells of room-temp cake frosting. Our first choice didn't enhance a damn thing, and our second felt like we were insulting the cannabis. Don't buy this one, even if you're a celiac—not even 10 bowls could make this into a desirable munchie.