Stopping at Nectar on Sandy for my obligatory Friday free-roll, I told my budtender that I was looking for something a little more deluxe than my customary $6 grams. I was enthusiastically handed a gram of Spirit in the Sky. "A beautiful nug." as she put it. I was struck by the name, as is usually the case, and eagerly accepted.

Related: Why Sandy Blvd. is the greatest road in the world when you're high.

And indeed it is. Sporting more frosty crystals than I've ever seen, as well as those cool little orange hairs that usually signal something special, I was quickly filled with anticipation. The next afternoon I sat on my back porch and rolled a fatty. I was impressed at the roll-ability, the perfect texture and even volume.

I lit up with my smoking (and life) partner. We immediately enjoyed the smooth, fruity smoke which sent us into coughing fits like first-timers. It gave us an energetic, happy high with a quick come-on that is long-lasting in it's undulating waves. Feeling obligatory, we cued up Norman Greenbaum's eponymous hit as the bubbly, euphoric energy took over.

We quickly fell into a Wikipedia rabbit hole. "Here's a strain" we remarked "who's name is based on a Jew who wrote a Christian song inspired by old westerns and Dolly Parton." Whoa.

Related: Smoke These Strains When You Need to Get Shit Done

This hybrid strain sports a strangely high CBD percentage (1.29%), which accounts for the feeling of full body relaxation that we quickly dubbed "goofy muscles". This would be a perfect smoke for a movie at the end of the night, it's euphoria melting into sleepiness at about the hour mark. However, being a sunny afternoon, that was not part of our plans. So we gathered up some friends and the rest of the bud and headed to the Alberta Street Fair.

Just missing the fest, we bought some cheap beer and chilled in the park. Always an important factor for me is how a weed "drinks". And I can attest that this bud pairs beautifully with Olympias; the beer-nergy quickly counteracting the strain's sleepier aspects, returning you to the euphoric talkiness of the initial hit.

Related: The Star Trek Strain brings the potent Trainwreck and Sensi Star together.

Stomachs grumbling and energy renewed, we headed to Solae's. Finishing another joint while sitting mesmerized by the blues of Lloyd Allen, we ordered the chicken wings with collard greens and cornbread. Our taste buds exploded. Here was great food, undoubtedly made greater by the bud. This weed "eats" too.

The music winding down and energy flagging, we left Alberta and headed back home. A nightcap of Spirit sent us into reveries, making impossible plans ranging from watching "those meteors" to hitting up Devil's Point. "They have great tots (sic)", a friend remarked. Expectedly—none of this happened and our friends left, leaving us on the living room floor, falling into the most pleasant sleep I've ever had there. The Spirit, at least for this day, had left the sky and entered through our lungs. Highly recommended.

spirit in the sky

strain of the week 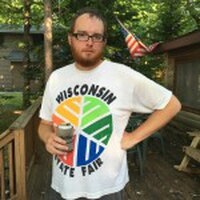 Jon Salimes is a film director and screenwriter. A recent transplant from the Midwest, he enjoys spending his time under the influence, collecting strange hats and aspiring to birdwatch.