"Exfoliate until your ass is red," says Reagan, a dancer at Sassy's on Southeast Morrison. Reagan's mother was a stripper, so she comes by her knowledge naturally. "Don't be shy. Just scrub your ass off."

Stripping is hard work. Regardless of what movies like Showgirls and Flashdance would have us believe, it's not all Cristal and getting swept off one's feet by a rich businessman.

"It's exhausting, both physically and mentally," says Maybe, who, like Reagan, is a four-year veteran with time at Sassy's, Union Jack's and Magic Garden. "I've had to take some breaks to do other things just to recharge."

Much of the blood, sweat and tears of exotic dancing goes into the backstage beauty routine.

After sitting down with Reagan and Maybe at Sassy's on a slow Monday afternoon, I am convinced that women the world over should drop their Vogue and Allure subscriptions and turn to strip-club dressing rooms for beauty tips. If you have a question about makeup application, hair removal or product selection, chances are very good Reagan and Maybe could answer it.

"I have very sensitive skin, so I can only use natural products," Reagan says. "Heavy makeup really takes its toll, especially if it's full of chemicals. You can break out and it irritates your eyes. I'm all about the natural stuff. Tarte, mostly, which I buy at Sephora."

Reagan has a fair complexion and curly red hair. Before her shift at Sassy's, she usually takes a bath and lets her long locks air dry.

"I don't style it much or use a lot of sprays or anything and men really seem to like that," she says. "I get the 'you look like a mermaid' comment a lot."

She's allergic to perfume, so she counts on her coconut shampoo and rose soap to do the trick.

"I know some girls who pour on the perfume or bathe in cheap, Fruit Loop-scented body spray, but my customers say they like how fresh I am," Reagan says. "They're glad I don't smell like a lollipop." 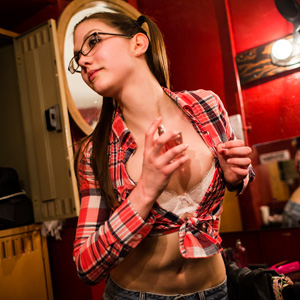 Maybe likes to take an Epsom salts bath on work days to keep her skin supple. She shaves her upper thighs against the grain (bikini line with the grain, upper thigh against) and applies her favorite perfume, Calvin Klein Euphoria. Then she straightens her wavy hair. If it's going to be a busy night, she adds extensions for extra flare.

"Sometimes it's fun to have super long hair," she says. "At first I was really timid about the extensions. I'd hold my head all stiff and was worried when I was on the pole they'd get caught in my armpit and rip out, but now I know they're not that delicate and I have fun with them."

Prior to hitting the stage at Sassy's, Maybe uses bronzer to accentuate her cheekbones and highlighter to freshen up her eyes. She gets her nails done about once a week and sometimes dons false eyelashes, which Reagan eschews, unless she has a photo shoot.

"You lose two to three lashes every time you wear them," Reagan says, "and they take months to grow back."

She isn't against a little glitter, however. "The whole guys don't like strippers who wear glitter' thing is a myth," she says. "Dudes get their beer goggles on and suddenly they're raccoons. They're like, 'Oooh, something shiny!'"

Reagan turns to Triiangleh, a young German Instagram star with more than 30,000 followers, for other eye-makeup do's and don'ts.

"Check this out," she says. "She's got these tutorials on everything, eye shadow, liner, mascara. I've really stepped up my eye makeup game thanks to her."

Reagan also credits her clean diet—she doesn't eat dairy or gluten—with helping her get into the best shape of her life. And she doesn't have to worry about reapplying deodorant between sets. "That's another bonus of eating clean: You can pretty much eliminate your body odor. It's a miracle, really."

Another challenge comes from Sassy's strict no-lotion policy. Lotion is banned since it can make the pole a dangerous place. Reagan found this out the hard way a few years ago when she slipped and injured her shoulder.

"You get used to having dry skin," Reagan says. "We have a joke here, that we're all alligators, not just because our skin can get dry but because we have callouses in weird places from the pole, like the insides of our thighs, behind our armpits, down our sides."

Ever consider buffing them off? "No way," she says. "They're necessary. They're a defense."

Both Reagan and Maybe get their exercise at the pole. It's also where they've learned to love their bodies. "Getting naked in front of strangers in an intimate setting like this has made me more comfortable with myself," Reagan says. "I didn't use to have very high self-esteem. I was really socially anxious, and I felt bad because I didn't have porn-star teardrop tits, but now I know, men don't care. They just like boobs. They just want to look at them." 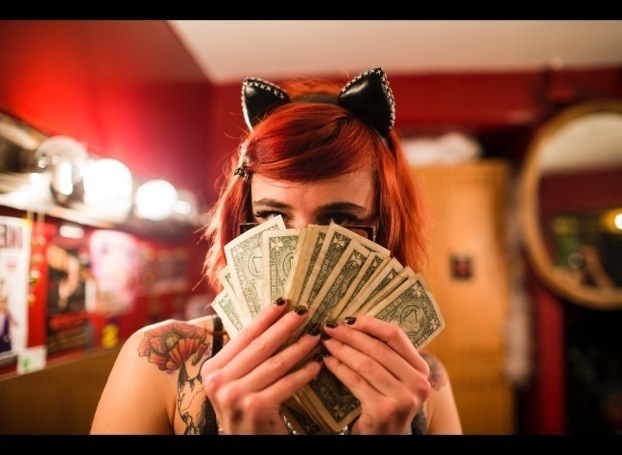 THE CLUBS: OUR FAVORITE STRIP CLUBS FROM A TO Z

A VISUAL TOUR OF PORTLAND CLUBS | GALLERY OF DANCE SHOES