Should you spend $35 on magic underwear?

Welcome back to Lady Things, the column where we investigate the dark underside of the female experience.

Since I began this column, I've received requests from readers that I try out those "period panties" that are constantly being advertised on Facebook to everyone with a vagina. You know the ones: the black underwear that was and then was not "too risqué" for the New York subway. The underwear that is fixing the lives of transgender men. The underwear that will magically disappear your period, once and for all.

Well, friends. Today is the day you've been waiting for. Today I tell you about this potentially life-changing undergarment and my experience wearing it. Today: PERIOD UNDERWEAR. 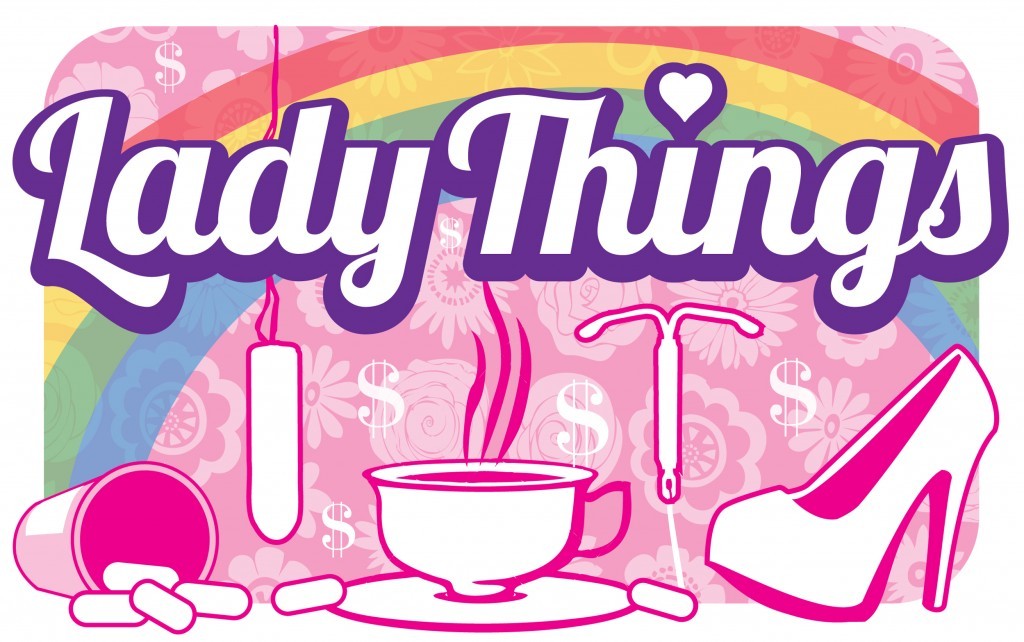 Thinx "period panties" (and look, anytime I have to say "panties" it's gonna be in quotes because "panties" is one of my all-time least favorite words and would never, ever come out of my mouth unless it was, like, my safe word, so you know I'm not under Kilgrave's mind-control spell) come with exactly the thing a product needs to make it big in this social media world we live in: neat packaging. 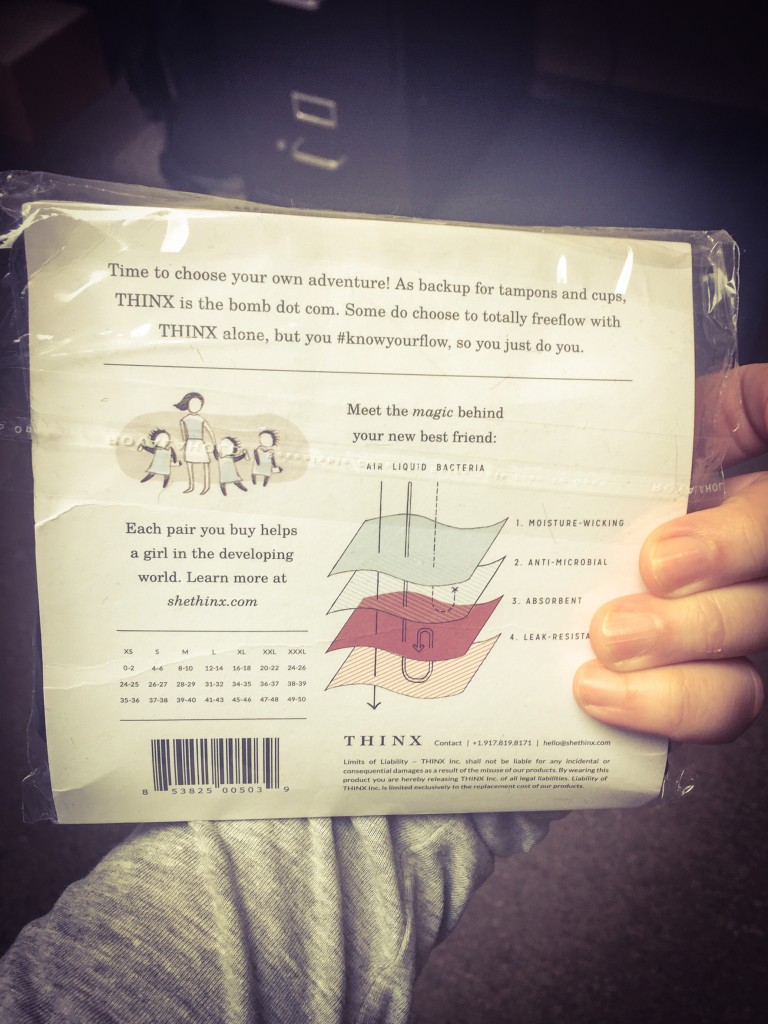 It's science-y, the copy is cute and references things millennials like ("Choose your own adventure!"), and it makes you feel good. "By reimagining feminine hygiene products to provide support, comfort, confidence, and peace of mind, we aim to eliminate shame, empowering women and girls around the world," it proclaims.

"ELIMINATE SHAME?" you think. "I want to be part of that!"

"We will work proudly and tirelessly until every single girl has an equal opportunity for the brighter future she deserves," it reads.

The "how" is a little TOMS shoes-esque and requires the belief that white guilt can save the world: Thinx sends money to a company called "AFRIpads," which "trains women to sew and sell washable, reusable cloth pads, turning local women into entrepreneurs." Don't ask why, if the answer for us is magical underwear, the answer for them is just normal pads. It sounds great and gives you an extra bump of self-righteous faith in your own largesse toward humankind as you enter your credit card information. And it probably doesn't result in anyone selling their organs, right? It couldn't. Purchase!

Anyway, women aren't buying these underwear for the possible tiny bit of good it may or may not be doing in Uganda. Women are doing it because of the possibility of magical underwear. And oh, THE UNDERWEAR.

My first thought upon opening the package was that the underwear was, um, bigger than I thought it would be. Here, my lovely co-worker demonstrates its size:

That is, of course, once you think about it, because it isn't regular cotton underwear. It is slippery and shiny and not stretchy at all. This is related to the deep science behind it, which is, according to the website: "1. MOISTURE-WICKING Keeps you feeling dry, even when you've had a spill. 2. ANTI-MICROBIAL Kicks bacteria's butt all day long. 3. ABSORBENT Holds up to two tampons' worth of liquid. 4. LEAK-RESISTANT Even your whitest white pants are safe."

Basically, it's underwear with a built-in high-tech reusable pad.

So, does it work? I wore the Thinx underwear I bought (with my own money—I'm not yet brave enough to expense period underwear) three times over two cycles: once at the very beginning of my period, once on a lighter day of my period and once overnight as "back-up" with my menstrual cup (the literature suggests people use Thinx this way). I went in with what I believe was an open mind. Here are my findings:

Finding: No. Hell no. Oh God no. My Thinx were always, always damp.

Sorry if that made you feel weird, but believe me, it's more unpleasant to feel damp between your legs all day than it is to read about it.

This sensation is made worse by the fact that the underwear is black, so it's impossible to see what's going on down there (the company also sells a tan color, but come on). Are you bleeding out or are you just a little damp like a normal human woman? There is no way to know, and by the end of the day I wore them alone, I tore these underwear off my body in the yoga studio restroom, only to discover there was no toilet paper and I had a crime scene on my hands. I couldn't SEE the crime scene, mind you, but my whole undercarriage was a mess, and when I shoved my menstrual cup inside my body, my hand came back looking like a horror movie poster.

Again, it was grosser to experience than read about.

But even when I was not bleeding very much or when I was wearing my cup and, to the best of my knowledge, not leaking, the feeling was deeply disturbing to me, a person who has been potty-trained for a very, very long time.

Finding: I don't know. I don't even know why I should care about this. Haven't we come to a point where bacteria is a good thing?

Finding: The underwear might very well hold "up to two tampons' worth of liquid." That is, as any women over 16 will tell you, not very much. Leaving your house to go to work in the middle of your period, with one tampon inside your body and another one in your pocket, is madness. Ask a woman. She'll back me up on this.

Finding: I did not have any leaks during my times wearing these underpants, I'll give them that. I feel, as a scientist using the scientific method, I should have worn them until they leaked, just to see what that meant and how it happened. What about when you've got three tampons' worth of liquid in your underpants? Does it ooze out the side? Up the back? The seal against your legs on these guys is pretty tight, so who knows? But alas, I am too squeamish to attempt such a feat, and too busy to waste a day waiting for blood to start pouring out of my underwear.

So, should you buy these period "panties" (gag)?

Here's the deal. Everybody already HAS period underwear. For me, it's just like, all of my underwear except maybe my newest pair that I have yet to destroy. Some people have a couple pairs of old, stained Hanes. It doesn't matter. The underpants you are wearing are superior to Thinx in a lot of ways. First, they hopefully don't cost $35 a pair. Second, you already know what it feels like when you are bleeding into them versus when it's just dampness that falls in the broad "other" category. You can wash them in the washing machine. You can use them as rags to clean up your bathroom once you've decided they are too far gone.

Sure, they don't give money to charity, but also, not buying a bunch of new shit is probably better for the world anyway.

Even though Thinx purports to want to "eliminate shame," their business model is honestly based on shame. We all want something to make it so we will never have some horrible blood-based accident. How humiliating that would be! And we all also wish sometimes that periods would just stop happening. So Thinx is offering a magic-bullet solution so good that they think it will mean transgender men can forget they even have a period. But periods can't be forgotten. You can get rid of them with drugs, but period underwear just hides your period until you have a sack of blood in your pants. It's gross, not true and maybe, not even a problem that needs solving.

Verdict: Spend $35 on something else that will make your period nicer, like chocolate or a couple yoga classes. These aren't that awesome.