My Night as a Pedicab Driver

What’s it like to be a cog in the machine of Portland at night?

In the United States of America, we don't like to think about the people doing the physical labor that keeps us comfortable. We leave when the housekeeper shows up and try not to make eye contact with the lady doing our nails. In other parts of the world, it's normal for the affluent to relax in comfort, not risking a stubbed toe or bead of sweat, as someone less lucky grunts away to save them the trouble of walking. But not here.

That's why Portland's pedicabs are such an anomaly. Humans transporting other humans on the strength of their muscles alone is not something the good people of America should abide. It's sadistic torture tourism if you think about it, which might be why most passengers are either drunk or on vacation.

Before last weekend, I had ridden in pedicabs twice. Once, on an unusually warm summer day in Victoria B.C., a man pulled my mom and me up a hill. And last summer, in Salt Lake City, I drunkenly piled into a pedicab to go from one bar to another bar. Both times I felt sorry for the person pedaling away while I did nothing but add considerable inert resistance.

If a pedicab passenger feels lazy, guilty and a little bit rich, what is it like on the other side? To be the blameless, sober, hardworking pedicab driver? Well, it's hard—interesting, unglamorous and hard.

"It's not a race," says Kyle, who calls himself the "Papa Bear" of PDX Pedicab, during my training on a Monday afternoon.

Kyle is the sort of warm but no-bullshit guy who can get away with calling himself Papa Bear. At PDX Pedicab's warehouse under the Hawthorne Bridge in Southeast, I nervously get on a 200-pound tricycle with an orange cab over the back wheels.

"Be aware of your spacing with your 4-foot ass!" he yells as he leads me out into the parking lot.

Slowly, I get a feel for the bike. It turns more sharply than you'd think, and it won't tip over when you stop or turn quickly. Kyle seems impressed when I manage to get the cab up the nearby steep hill on my first try. Soon, he's in the back of the cab and we're headed for the Eastbank Esplanade.

Kyle tells me that girls do well as pedicab drivers because they have less ego. For two hours, we pedal across Old Town and the Pearl. On the return trip over the Hawthorne Bridge, Kyle tells the story of another trainee whose pedicab slipped off the edge of the sidewalk, dumping Kyle into oncoming traffic.

By Saturday night, the soreness is gone from my legs but not from my underparts. To help, I wear padded bike shorts under cutoffs. PDX Pedicab drivers are independent contractors and, as such, can wear whatever they want. I've opted for layers. I pregamed with a Santa Cruz burrito. I'm as ready as I'll ever be.

When I get to the warehouse at 6 pm, Kyle is waiting. He sets me up with my cab for the night. It's smaller and lighter than the training bike. I download an app so I can talk to other drivers, check my fanny pack for tire irons, wrenches and my phone with Square, and pull out into a beautiful spring night.

Almost immediately I pick up two slightly drunk women and a very large man on the Esplanade near OMSI. They are lost. I take them the equivalent of two blocks before they get bored of taking selfies of me, using their selfie stick. They get out and attempt to pay me in weed, but I tell them not to worry about it—I have enough weed, and I don't want to carry theirs around all night.

I ride to Deschutes Brewery in the Pearl and meet up with another driver, Ryan, as the sun sets. Ryan says it's a slow night and no one seems serious about getting a ride, so I take off to troll the Pearl, which is full of people who don't want rides. 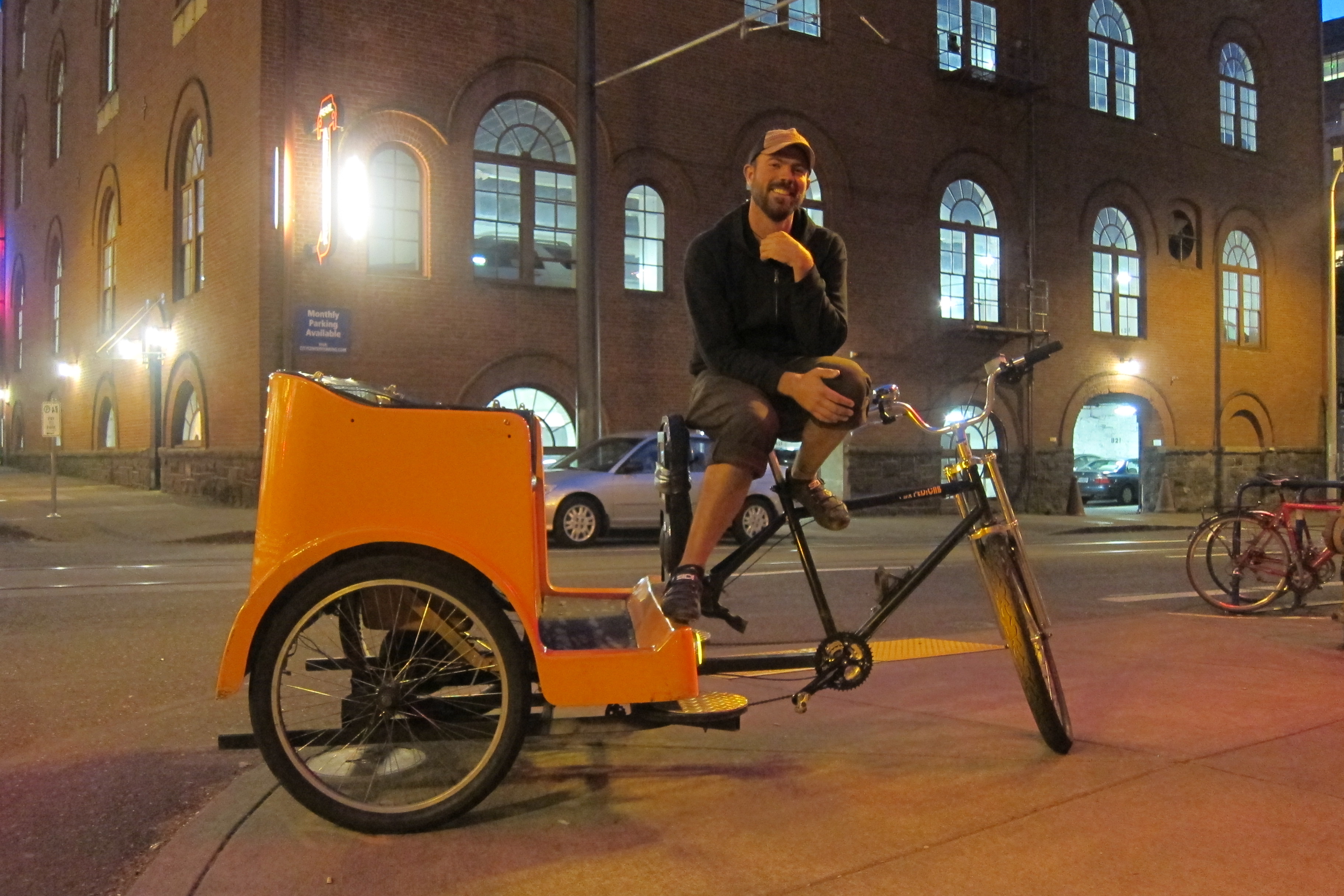 I slowly make my way up the big hill to Providence Park to catch the end of the Timbers game.

Ryan is already in front of the stadium, eating a slice of pizza. We sit in our cabs until a tipsy woman approaches us, a man trailing her.

"Are you guys just going to sit there? Should I drive?" she says.

Ryan lets me take the fare, even though cabby rules state that it is technically his, since he got there first. The couple wants to go to a bar, and Ryan suggests Momo. On the ride there, which turns out to be basically downhill, the woman tells her date, "they only work for tips," and I don't contradict her—we're supposed to agree on a fare before starting, which I keep forgetting.

When I drop them off, the woman palms me a $20. I ride back up Morrison Street, and the crowd is streaming out from the stadium. Quickly another couple gets in my cab. They tell me they want to get "shit-faced." Feeling confident in my new knowledge of how to ride to Momo, I says it's $10 before taking them there. The man pays me $12, and as I get ready to head back toward the stadium, I hear a voice yelling for me to stop. It's the first couple, drunker. They want to go to Rialto, so I take them down the hill, and the man gives me $15.

With the Timbers crowd mostly gone—and the hill looking steep—I cruise toward Chinatown. I stop on a side street downtown to fix my lights and gulp water.

A white sedan with deeply tinted windows pulls up next to me, almost boxing me in. The window is cracked open.

"No," says a gruff male voice.

The car doesn't move, so I jump on the bike, panic rising in my chest, and pedal off as quickly as I can. The white car follows me for a block and a half until I can turn onto a big, busy street. I am creeped the fuck out.

Jittery with adrenaline, I get on the radio and ask another driver, Lars, where he is. He tells me to meet him at OMSI.

I ride down the wrong street, nearly get hit by a car and barely make it over the Hawthorne Bridge.

Lars and Michella, also a driver, meet me in front of OMSI, where OMSI After Dark is winding down. Lars and Michella lament the slow night. People try to buy cigarettes off us.

Lars gets a fare and takes off. I overhear a group of girls say, "Damn! Surge pricing!"

"We don't have surge pricing!" I say. "Where are you going?"

They are young, a little buzzed and headed to White Owl Social Club. Michella and I each take two of them, and we pedal slowly away from the river. The uphill is gradual but terrible. The girls laugh and apologize, and I make jokes about how it's better than spin class. But there is a moment when I wonder what would happen if I give up, jump off the seat and abandon the cab. The girls pay me $35.

My legs are so tired, I'm not even sure I can make it back to the warehouse, let alone back over the bridge, so I'm relieved when Lars calls and says the night is too slow and he's heading in. We buy some beer, and the night ends with me $82 richer, minus $25 I have to pay PDX Pedicab for using its bike and $5 for two Hamm's tallboys.

The three of us sit in our cabs in the parking lot of the warehouse, drinking our beers, waiting for someone to open the door. We play a game Michella calls "Medium-Sized Animal," where you just name medium-sized animals. It's way more fun than you'd think.

My Night as a Pedicab Driver | Tykes on Bikes

Bikes vs. the World | Bike Gear for Spring