Before I moved to Astoria, I'd never heard of the Columbia Bar. Two years later, I know the graveyard of the Pacific is the point where the Columbia River meets the open ocean, where 2,000 ships have sunk since they started counting—a place so treacherous that commercial ships are required to employ a licensed bar pilot to navigate them. Now, when I look out to the choppy river during a storm, I worry about the people crossing the bar. When I see a helicopter flying above, my heart stops.

I suppose you could say this town has worked its way under my skin.

The full story of why I moved from Portland to Astoria is too much for today. The short version is that the city where I'd lived for nearly a decade was rejecting me like a splinter in its skin. After leaving my husband and career, I was up to my ears in credit-card debt and working at a food-cart pod that's now being developed into bourgie senior housing. So I did what so many Portlanders dream about, and moved out to the coast.

In some ways, Astoria is still the little river town it's been forever—the state of Oregon's population has quadrupled in the past century, as has the size of most of its major cities, but Astoria's population has remained a steady line, with no major dips or bumps.

When I first moved here, I lived in an apartment overlooking the river. Directly north of me, a large ship named Ocean 21 was anchored. As I drank my morning coffee, I watched as tiny pilot boats crossed the Columbia, lights piercing the morning fog, all dwarfed by the monstrous ship. To me, it was as much a part of the landscape as the mountains across the river, and nearly as large. One day Ocean 21 was gone—back out to sea.

Life feels fleeting here, and sometimes that brings calm. I run along the river to the sound of water and birds singing, and the scent of malt and hops. A chilly coastal wind reminds me how small I am. The river existed long before me, and will exist long after, and I am in awe of its power.

Looking down the hill at the sun dancing on the water, my chest fills with something that feels like love.

But when you actually live somewhere, you start to see certain things differently.

When I lived by the river, I awoke every morning to the maddening cacophony of barking sea lions. The barking seemed only to grow more intense as it moved up the hill, as though they were running after you, all blubber and whiskers, flippers and stink. If you come out to the coast just for the day, you gawk and take photos. But while tourists snap pictures of sea lions swimming gracefully or shifting from flipper to flipper as they bellow, the fishermen tell stories of being attacked by the bulls—the largest, loudest and ugliest of them all—monstrous beasts that can kill a human in seconds.

Related: In the War Between Sea Lions and Astoria, a Victory for the Oppressors

In Portland, I remember hearing people talk about the piles of money you could make working on a commercial fishing boat. No one I knew had actually done it—and now I know why. The boat doesn't need just a guy willing to work hard and maybe die, the captain needs someone he can trust with his own life. If one cocky deckhand decides to question the captain at the wrong moment, everyone on board is at risk. And if a deckhand doesn't do what he's told, there's always another one to take his place.

Commercial fishers work only three months out of the year and make enough to live on for the other nine months. If they survive. For those three months, they don't drink, they don't fuck, they work when they're not sleeping, and sometimes they don't sleep. Every fisherman I've met has come close to dying at least once, both on land and out at sea.

There's a tavern I go to sometimes in logger country, about a half-hour drive from Astoria. Out there, the story is similar. The men start work early in the morning and are in the bar by noon. They take pride in their work and tell stories of the good men who died on the job —sometimes just weeks before. They are family men who drive pickup trucks and drink Olympia and cheap whiskey. Risk is part of their daily life.

As much as these fishing and logging bars remind me why I came here, the truth is, I'm still just a city girl with a truck—a glorified tourist. I don't bring up religion or politics, and I let the racist jokes slide. I drink my whiskey and listen to their stories, and then go home to write about it.

I belong to those downtown Astoria bars where artists and writers and local politicians meet, the places where bearded, tattooed service-industry hipsters drink. The fishers, loggers and old men who work at the mill complain about the downtown crowds, assuming they're visiting from Portland. The truth is, most of the hipsters were born and raised here, too—just in a different era, and by parents who lived different lives.

Related: A Goonies Tour of Astoria

Downtown is abundant for those who can afford it or are willing to live on credit, full of sensuous and briny raw oysters, some of the best craft beer in Oregon, muddled cocktails with fresh squeezed juice, and the sounds of a drag show or live bluegrass music.

Hedonism is part of Astoria's sordid history. It was the town where hard-working men came to drink and gamble in the early days. Tourism has always been an industry here, as necessary to our economy as fishing or logging, but without the pride.

You hear the same conversation these days—growing fear that after a century of stasis, Astoria could lose its soul. If that were to happen, it would no doubt be the fault of outsiders like me who come here demanding the quality and conveniences of the city.

Related: Portland, I Love You but You're Forcing Me Out

I saw it happen to Portland, when all the things that made the town unique became just another marketable brand. Passive-aggressive militant liberalism became the norm. Wealth flooded in, and many of those who lovingly crafted the city's reputation could no longer afford to live there.

Yes, Astoria has a long history of class disparity—Chinese cannery workers were buried in unmarked graves and Italian masons worked for months without pay, while the wealthy built towers to look down upon the city. The legacy of those who made it big lives on, along with scandalous stories of their eccentric lives. "Progress" might create a few jobs, but the wealthy benefit the most. Those who struggle call progress by a different name.

Still, there's magic in this town. And there's still freedom to be accepted for who you are, whatever it may be, so long as you do the same for everyone else. Here in this old fishing town, we're hard workers, reliant on the sea and the trees, prone to degeneracy—like those who came before us, like those who are buried beneath us, like those whose spirits churn in these waters.

uide, the whole experience should feel a little bizarre. 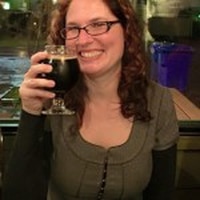 Tanisha Caravello is a contributing writer who now lives in Astoria,. She's worked in the beer industry and now works in historic preservation.