After a year of drawing Donald Trump, the future looks bleak to political cartoonist Matt Bors.

"This is our new reality. I don't know if it will ever go back to normal," Bors tells WW.

"I don't know if we'll ever have a politician as president again. It might just be celebrities and tech entrepreneurs from here on out."

It's hard to walk away from Bors' new art show, President Trump: Year One, with a more moderate conclusion. The exhibit, now on display at Sequential Art Gallery, displays 23 of Bors' cartoons satirizing Trump and his administration. It was so inevitable that Bors, a Pulitzer-nominated cartoonist and founder of The Nib, would spend the year reckoning with an onslaught of absurdity, that Sequential Art Gallery asked him if they could display his work from Trump's first year before Trump had even been sworn in.

"We're talking about the biggest idiot who's ever been in the White House," says Bors. "He's 280 pounds and has dentures and fake hair, his wife won't touch him and he watches 8 hours of television each day. I mean, this guy is probably one of the most loathsome creatures to ever occupy our minds."

Year One functions as a catalog of the endless stream of terrible and just plain baffling moments that made up the first year of Trump's presidency. "It's hard to keep track of everything," says Bors. "It's like a rolling disaster. It's just one thing after another." So we asked Bors to pick his comics that depict Trump at his Trumpiest. 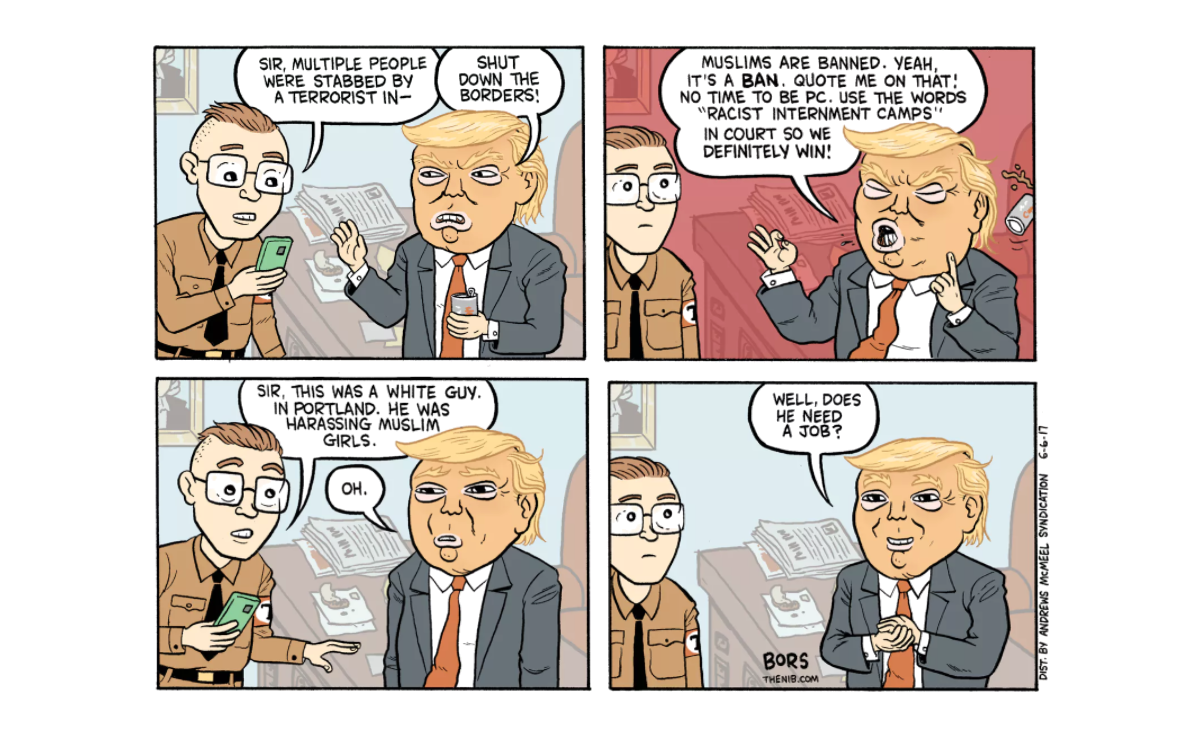 October: Trump argues with the widow of one of the soldiers who died in Niger.

November: "One bright spot in 2017 was very narrowly avoiding electing an accused child molester to the Senate," says Bors. "It was a real squeaker, but in the end, a Democrat beat child molestation by a small margin."