The West End is no longer just the less-skyscrapery, less-warehousey confluence of downtown and the Pearl. A whirlwind of development and refurbishment has rapidly transformed it from a sparse expanse of flop houses and empty office space into the epicenter of Portland's high-end shopping. The West End is where Japanese tourists fight with fashion kids at tastemaking boutiques over $150 black-and-white, tie-dyed sweatshorts before lining up at Nong's for the Portland food-cart experience. If you aren't a fanatic for shopping, run screaming to the eastside. But if you don't mind spending a couple bucks on the finer things, you've found the right place.

Some authors are writer's writers. Shift Drinks is a bartender's bar. Our second-favorite Portland bar of 2016 is the type of place that serves the Tinder Flare—a rum cocktail that's like sipping a cream soda with a peach-flavored Jolly Rancher in your mouth—alongside an expansive wine list that includes boutique Champagne and alarmingly good $7 glass pours. In true form for service professionals, the bar's off-premises license means you can buy a bottle of rosé to go for under $15 before 2:30 am to keep the party going.

Brunch Box serves titanic burgers with absurd ingredients that look like they were dreamed up by a crack team of professional stoners. The Thai Bacon is a rich, savory favorite, but first-timers should order one of the behemoths served between two grilled cheese sandwiches. Don't tell your cardiologist. $.

With its rustic small plates and shared tables, Clyde Common cemented the form of the Portland restaurant when it opened in 2007. Busy happy hours fueled by the concoctions of bar celebrity Jeffrey Morgenthaler and a full menu overhaul—featuring new influences from chef Carlo Lamagna's trip home to the Philippines—have kept Clyde Common exciting almost a decade later. $$-$$$.

The Frying Scotsman makes authentic fish and chips, meaning pillowy, gnocchi-like wedges of fried potato, and crunchy slabs of fresh fish fried golden brown in a batter that tastes lightly of curry. Enjoy it with plenty of salt and malt vinegar in nearby Director Park. $.

Each cup of coffee at Heart is treated as its own single-origin art project, lovingly crafted from the unroasted bean to a finished product designed to bring out as much nuance in every cup. There are a lot of cafes and roasters in Portland that love coffee. Heart may be the only one that is in love with coffee. $.

Maurice is almost Martha Stewart, if Martha Stewart were a twee 30-something Portlander in a French sailor's shirt. Treat yourself to open-faced sandwiches and platters of honey, figs and cheeses, and the main attraction: dessert. The lemon pudding cake sounds exactly like it tastes. $-$$.

The eponymous dish at Nong Poonsukwattana's food cart is still perfect—tender chicken served on a bed of rice with soybean sauce exploding with ginger, chili and garlic. $.

When I think "sandwich"—the Platonic form of sandwichhood—what I think of is the spicy Italian sub the way it's made at O-Bros Osteria: probably my new favorite in town. The fillings outshine the bread, acids balance fat—it is as classic as Jack Purcells. $.

Ruby Jewel's contribution to Portland's pantheon of craft ice cream is its sandwich. Order whichever flavor best tickles your fancy between two cookies for a treat as mobile as it is delightful. $.

Probably the best brunch and one of the best dinner spots on the westside, the perennially packed Tasty n Alder serves its whimsical New American menu family-style. Never skip the Tasty steak and cheddar eggs, a glorious mess of char and fat atop a pillowy corn pancake. $$$-$$$$.

The crowd and ample mingling space at Jackknife can make it feel like a college bar, but the furniture is nicer, the people are better dressed, and the food and cocktail menus are a hell of a lot better.

Whether you're looking for a bedtime Narragansett at Quality Bar or a slice from one of Sizzle Pie's heavy-metal- or punk-themed classic or vegan pizzas, this brother-sister combo of late-night hangover mitigation and/or enhancement is the place to be for topping off a night in Old Town's skeezy club district. $.

Momo is one of the only places in the West End suited for 45 minutes' worth of post-work unwinding. Strong mixed drinks sit aside jug-sized glasses of wine on the wooden tables of one of the city's best hidden patios: an enclave preciously guarded by towering pitted brick walls.

Scandals touts itself as "Gay Cheers," and it more than lives up to it, full of longtime regulars and yet immediately welcoming to strangers. Expect every-damn-body to be at its weekend-long Pride block party, now a Portland institution.

Close your eyes. Imagine Anthropologie's aesthetic, except upgraded to an expertly curated boutique that carries imported French candles, Oregon-made ceramics, Japanese designer dresses and just about everything else under the sun that screams, "I have exquisite taste!" Welcome to Alder & Co.

Backtalk carries affordable clothing and jewelry from emerging women designers such as in-house clothier Laurs Kemp, whose boob-printed dresses and crop tops are indicative of the kind of slightly left-field garments you can expect to find. 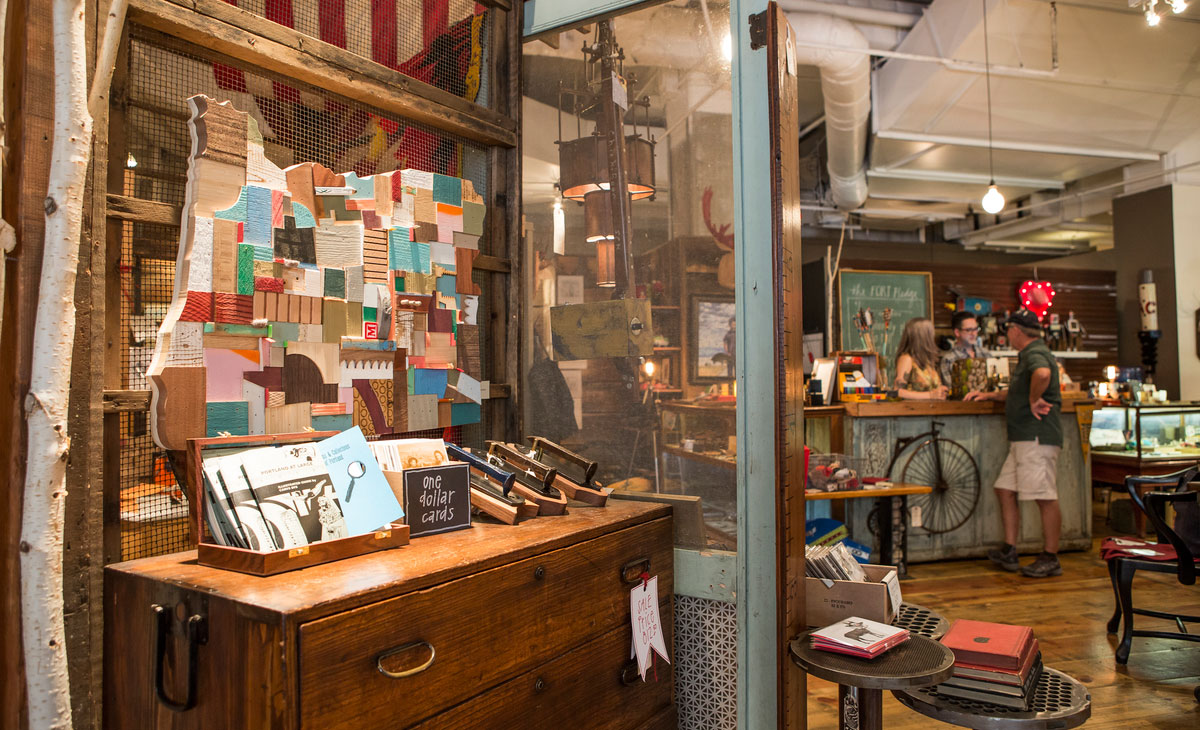 Billing itself as a kind of "Manthropologie," Boys Fort carries a mix of Portland kitsch, locally made gifts, sundries, clothing and furniture in a very handsome building with an aesthetic straight out of a Wes Anderson movie.

This is one of the rare places in Portland where shoppers casually wear $1,000 in streetwear. One of the city's most cutting-edge boutiques, Frances May carries garments from high-end streetwear labels and designers like Henrik Vibskov, Opening Ceremony and Robert Geller, many of which you'll be hard-pressed to find anywhere else in the city.

Walk into Knit Purl and you'll probably see customers staring at a mesmerizing device that transforms loose loops of yarn of every weight and color into tightly woven balls. The device's devotees won't mind if you join them to bask in its transfixing gears.

With notes of "wet cement, pitch, crack weeds, traffic," Streetside is a soap that smells like sidewalk after rain. Maak Lab doesn't just sell soaps, candles and fragrances you won't find anywhere else, it also creates custom scents for hotels and businesses across the country.

So you're looking for a fancy gift, but you aren't quite able to drop thousands at Pioneer Square's upscale jewelers. Maloy's has antique fine jewelry starting in the low hundreds, running up to big-dog prices in case you want your grandparents to have a really happy golden anniversary.

Michael Allen's has long been supplying Portland's well-to-do with high-end formal menswear mostly sourced from obscure European fashion houses. Many garments are impossible or extremely hard to find anywhere else in the country, making a trip to Michael Allen's a must for the fancy-suit enthusiast.

Are you an outdoorsy person who wants to look fresh on the streets? Poler fuses functional outdoor gear and streetwear for men and women in a way few brands ever do, making garments perfect for flossing out in the Pearl or taking on Mount Hood at a moment's notice.

Quin makes fancy candy out of old-timey ingredients, which is to say real fruit, butter, cream, spices and vegetable-based colorings instead of terrifyingly named chemicals. The salted caramels are—as Quin's website suggests—perfect for everyone on earth.

For those who want to pay a premium for top-end, nearly indestructible jeans, denim jackets and workwear, Self Edge carries blue-collar fashion intended to last a lifetime. It also hems and repairs garments so that Canadian tuxedo never needs to show wear.

Don't be threatened by the spartan, concrete decor. Spruce Apothecary carries a well-curated collection of personal-hygiene products for men and women that regularly beats international chains in price and quality.

Tanner Goods is the Neiman Marcus of the West End's burly boutiques. Nothing is cheap, but the quality of its Portland-made leather goods and hand-picked streetwear is second to none. Tanner's duffel bags look like they could survive a hurricane.

Portland is chock-full of "by Portland, for Portland" shops, and Tender Loving Empire is probably the city's best. Forgoing touristy knickknacks in favor a curated selection of locally made art and jewelry, TLE also doubles as a producer, releasing local music through its eponymous record label.

Carrying an unreasonable variety of undergarments, swimwear, gym gear and hygiene products—including imported shaving creams, beard oils and colognes—UnderU4Men will have you looking and smelling like an adult.

If there is a cycling shop in Portland for the cool kids, West End Bikes is it. Carrying fancy, high-end models from Specialized, Wilier Triestina and others alongside fashionable street- and cyclewear from Osloh, Parker Dusseau and the like, West End Bikes will make you the hottest person on two wheels.

West End Select Shop is the type of boutique where you can buy black-and-white tie-dyed shorts from Japanese designers, handmade jewelry from New York City, and fair-trade baby booties from Central Asia that look like little elephants. Prepare to be the hippest young mother on earth.

WM Goods sells women's clothes, cosmetics, shoes and accessories that are smart enough to turn heads on the street, and elegant enough to help your mother be the talk of her monthly dinner party.

Specializing in 20th-century self-taught and contemporary art, Adams and Ollman exhibits works from artists who have shown at international galleries, as well as sculptures fished out of a Philadelphia dumpster in the 1970s. Amy Adams curates some of the most interesting solo and group exhibitions in Portland.

Crystal Ballroom is both one of Portland's foremost venues for national touring-level musical acts and its own stand-alone McMenamins brewpub, where there's a knack for the experimental. Stop at the bar before the show for a pint of whatever's weirdest.