When Quentin Tarantino visited Portland, he came straight to Hollywood. That's fitting, not just for the neighborhood's unparalleled theater, which holds one of the nation's only 70 mm projection systems, but because this is the place where glamour meets grit. Comedians and politicians both grace the stage at Velo Cult, a bike shop with a bar. You'll find bikinis, burgers, a Welsh pub, Snoop Dogg's Uncle Reo, and a tiki bar all circled around the theater marquee.

Behind its iconic marquee, this arthouse cinema is the most wonky, badass theater in the Northwest. On its rare 70 mm projector—one of fewer than 100 in the nation—new releases like Tarantino's The Hateful Eight and classics like West Side Story are eyegasmic. Oddball events like B-Movie Bingo share screen time with Hollywood blockbusters and kung fu film screenings from the unparalleled collection of curator Dan Halsted, while visitors enjoy beer, kombucha and pizza from the bar. 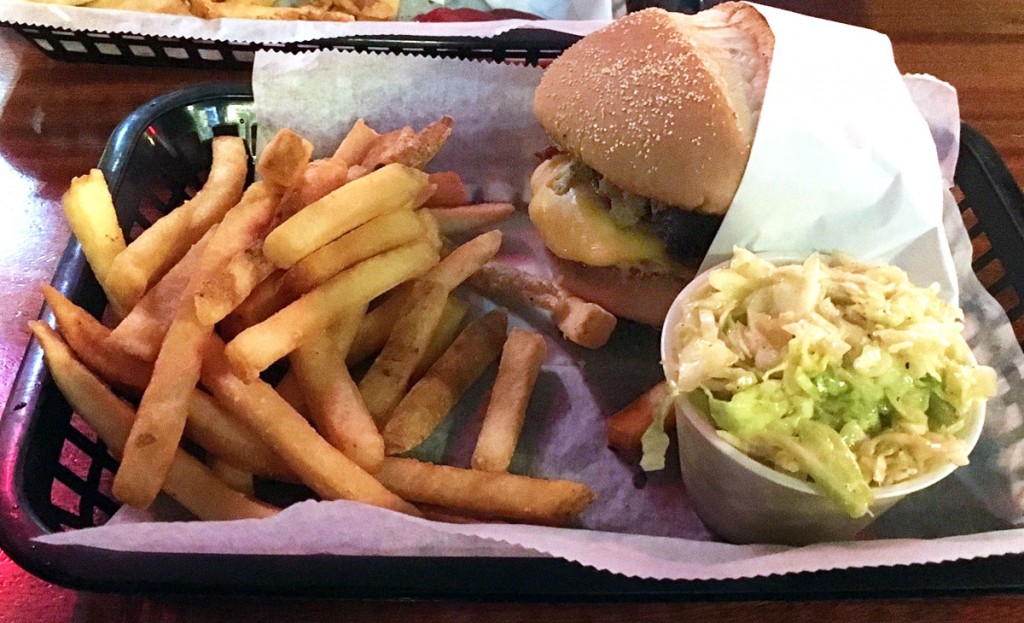 Even with its mandatory bacon policy, Killer Burger reins it in to create tight, interesting burgers like the Bender—bacon, jalapeño and barbecue sauce—all served with fries, and best washed down with a pint from an impressively curated tap list. $.

The food of Guam—Chamorro cuisine—is a mashup of the myriad cultures that have influenced this small Pacific island. The superstar is kelaguen mannok, a mix of smoky grilled chicken, chopped scallion, red chili, grated coconut and lemon. Eat it with the coconut milk and butter-rich titayas flatbread. $.

You aren't going to get any highfalutin bourgie-cue at Snoop Dogg uncle and Reo's pitmaster Reo Varnado's barbecue joint, but you will get some tasty, tender and dirt-cheap spareribs served with jammy Mississippi-style BBQ sauce and sweet cornbread. $.

Hale Pele is everything you could ever possibly want from a tiki bar, from a delightfully kitschy interior to a remarkably broad assortment of things set on fire. Order damn near anything on the menu, from the ultra-boozy Zombie Punch to the creamy but not too sweet Coconaut.

With one of the sneakiest rooftop patios in town and a long history of excellent seasonal brews, Laurelwood's genius here has always been its ability to provide a setting that works for both adults and kids.

The Moon and Sixpence

Boasting two beer engines for hand-pumped, cask-conditioned ales, a menu hawking pasties and Welsh rarebit till the wee hours, and dartboard alcoves ever bustling with chummy gibes and grim determination, the Moon and Sixpence seems the very model of a modern British pub.

More than merely housing a genre-spanning inventory of some 50,000 comic books and graphic novels, this shop serves as a stage for the industry's top talents—hosting creator karaoke and signings for both homegrown heroes (Cyborg writer David Walker) and living legends (definitive Batman artist Neal Adams).

Inside an iconic former dairy building, the 77-year-old Mountain Shop is a top REI alternative, stocking everything from camping gear to bear repellent and GoPros. Inside, the rental shop does a good business in ski gear for a trip to the mountain without the commitment.

This brightly colored Popina outpost may be the largest swimwear shop in Portland, and the go-to for people wanting higher quality than Forever 21. While some suits top $100, the sale bin goes as low as $10, and the shop also offers a complimentary beer.

Fresh off a move from its longtime location in the West End, Ray's Ragtime continues its proud tradition as one of the best secondhand stores in town. Ray's is the go-to spot for post-ironic tie-dye T-shirts and mother of pearl vases emblazoned with Martin Luther King Jr.'s portrait.

Rain or shine, this midsize market draws nearby residents year-round for Olympia Provisions meats, fresh tamales, tons of produce, and tonics from Portland Juice Company. With live music in summer months, it's more festive than the 'hood's other options: Whole Foods and Grocery Outlet.

Beyond fix-ups and custom gear, this bike shop boasts a bar with beer and kombucha and a stage for standup showcases every Wednesday. It hosts political rallies and comedians, all while bike technicians repair flats under the store's disco ball and Christmas lights. There's a 24-hour turnaround guarantee for most repairs, and enough entertainment to keep you busy for nearly that long.

The Moon and Sixpence