Kerns may just be Portland's Goldilocks neighborhood. On the one hand, Kerns is gorgeously residential—your archetypical middle-class American neighborhood complete with big lawns, yawning streets and unpretentious family housing. On the other, it contains two of Portland's most storied main drags—East Burnside Street and Northeast Sandy Boulevard—which provide it unprecedented access to fine food, fine culture and, more recently, fine cannabis. Kerns is a neighborhood seemingly built for lazy weekend meals and slow walks down tree-lined avenues, not too busy, not too quiet.

Take your favorite high-end grocery store, boil it down to a concentrate, and what you get is Providore. A market devoted to all of the finest things in life—including but not limited to handcrafted pasta and deli classics from Pastaworks, meat and seafood from the Meat Monger and the Flying Fish Co., flowers from Emerald Petals, ultra-seasonal fruits and vegetables from Rubinette Produce Market, and bread and pastries from Little T Baker—plus fresh coffee, Italian rotisserie chicken, salads, sandwiches, oysters, sweets and booze to enjoy during your trip. It's not cheap, but if you want to throw a hell of a backyard summer party, you've come to the right place.

Sarah Hart's Alma Chocolate works with single-origin cocoa to create lavish treats like hand-gilded chocolate Virgin of Guadalupe's and gem-beautiful bon bons. She morphs chocolate and coffee into all of its wonderful, myriad edible and imbibable forms at her flagship bakery, cafe and chocolate shop. $.

Basilisk's towering fried chicken sandwich—with its crisp crust and drippy, juicy flesh, house-pickled cucumbers and butter-kissed bun—is the best in town. Pair it with a bag of fries. They're twice-fried, absorbing enough oil to have the heft of a gummy worm, meaning the $3 paper sack weighs about as much as a softball and will feed three. $.

Portland pizza spots assume the preferences of owners who have emigrated from regions with specific takes on this divisive dish. In Dove Vivi's case, the format of choice is a unique cornmeal crust from Chicago via San Francisco via L.A. Don't hesitate to split a pie. $$.

Harvest at the Bindery

Vegans need soul food, too. Much of Harvest at the Bindery's menu consists of seasonal dishes of roasted vegetables with flair, and every table gets a plate of cornbread with a spread of hazelnuts, herbs and safflower, which I'd put up against any free bread plate in town. $$. 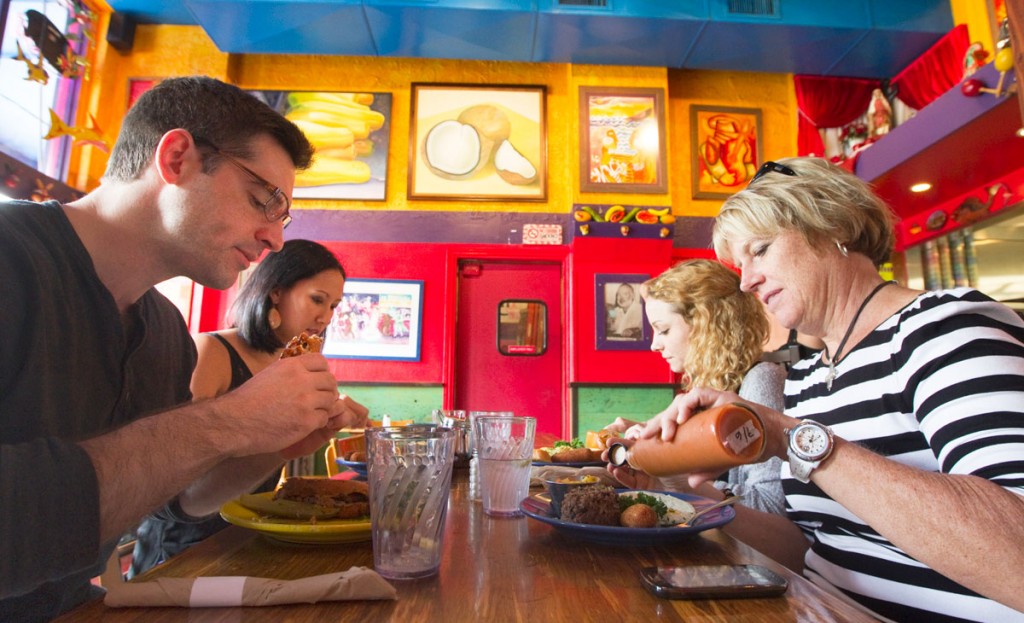 Inside of that aquamarine and yellow building at 28th and Glisan is a riot of inexpensive, delicious plates of Cuban cuisine served in overflowing portions. Order anything made with pork. A side of Pambiche's plantains will make you wonder why anyone still eats french fries. $. 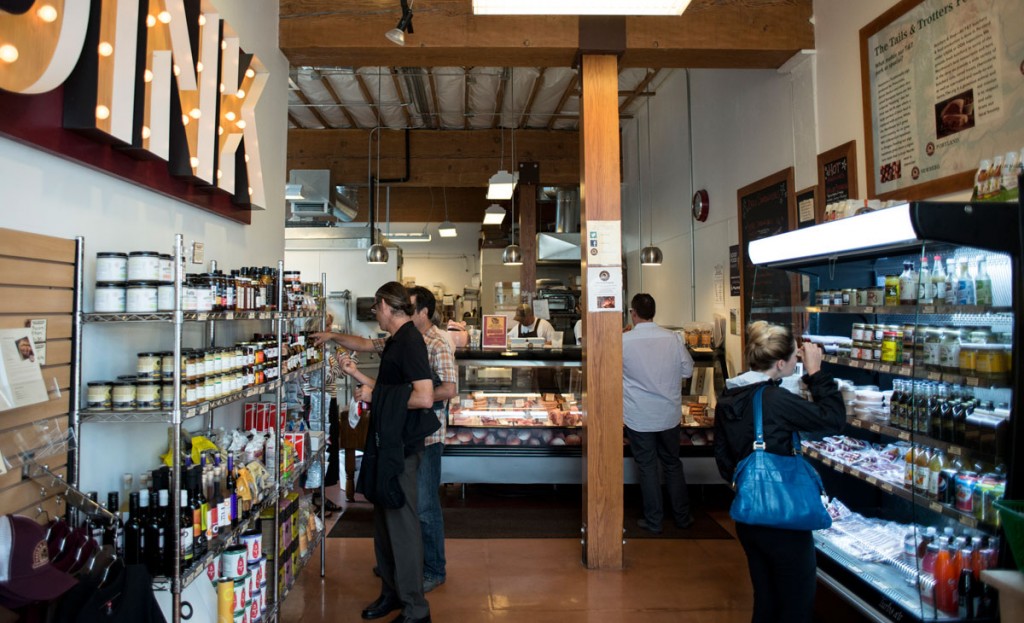 Tails & Trotters is best known as a butcher shop, but it also serves sandwiches characterized by a loving attention to its trademark pork. Order the baseline pulled pork: loosely Eastern-style, with peppery vinegar sauce, housemade garlic aioli and some seriously tender and sweet hazelnut-fed pork. $.

If you want to watch a Portlandy sport like soccer or basketball but want to maintain some semblance of cool, stop worrying and go to Beulahland. At its heart, it's a neighborhood dive hybrid: Any shiny edges have worn off, but everyone feels like friends.

During the week, Church is a cool indie bar with an ironic name and DJs who occasionally put on a Shins track. On the weekend, it turns into a dance club, with a line down the block and a more diverse clientele than most other places in the neighborhood.

If it were possible for the retired loafer lifestyle to manifest itself as a neighborhood watering hole, Laurelthirst would be it. Laurelthirst contains one of Portland's most vibrant old-time, folk and bluegrass scenes, to be enjoyed with a pint from a tap list that skews both obscure and comfortable.

Portland's best German bar is also it's best German restaurant. Here, you can sit with a child and drink a liter stein of a weiss imported specifically at the request of owner Dan Hart, with a sausage made from pork and veal and a lick-it-off-the-paper-boat curry ketchup on the side.

Once the sort of dive where Don Draper would go to drink himself to death, the "Handy Slut" was cleaned up into a place where you can actually see the vintage beer schwag, Playboy pinball machine and pool table. Now, it could be his rec room.

A toy store devoted to all things Lego—from the thousands of tranquil, smiling, yellow "minifigs," to birthday party packages to new, used and rare sets— Bricks & Minifigs carries everything for engineering-minded young'uns and those who grew up with Denmark's greatest export.

Every big city has its good old-fashioned gigantic record store packed to the rafters with hundreds of thousands of new and used CDs, records, tapes and memorabilia. Portland's is Everyday Music.

Hollywood Vintage is part of Portland's elite cadre of vintage megastores—beautiful collections of clothing that rarely dip below the "how has no one bought this?" level await alongside complete sets of neon green glassware and equivalent-quality second-hand sundries—with the twist of a massive costume warehouse just past the cavernous main room.

Finally, the combination cafe, bar and all-things-motorcycling store that Portland has been waiting for. See See serves Stumptown Coffee and $2 Rainier tallboys in a huge concrete and lacquered-wood cafe lined with vintage motorcycle helmets, and serves parts, apparel and riding gear in the back. It even has its own riding team. $.

Ron Swanson would faint at this woodworking superstore. Woodcrafters carries a dizzying amount of woodworking materials and supplies—from lumber and plywood, to hundreds of books and DVDs and more clamps, awls and lathes than you can shake a stick at—plus a professionally staffed custom wood shop for your most ambitious projects.

The Tonic Lounge emerged from the ordeal of Jon Taffer's Bar Rescue as Panic Room. It's signage may be a blight on Sandy Boulevard, but Panic Room plays host to some of extreme heavy metal and punk's most obscure legends—bucket-list acts over which many heshers lose their minds.

Offering classes and workshops for children from ages 3 to 18—including a program geared toward teenagers who want to act full-time—the Oregon Children's Theatre has been providing an outlet to creative kids to express themselves and putting on several professional-quality productions a year at the Newmark and Winningstad theaters for decades.

Harvest at the Bindery