As the home of Portland's skyscrapers and center of the city's administrative and financial power, downtown Portland has the air of deliberate exclusivity that comes with being old and monied. Many of the city's finest clothiers, jewelers and restaurants blend into a background of chain stores or hide in tiny storefronts in and around Pioneer Square, while the north end bears both the rich history of 100-plus years as a working-class watering hole and the grisly scars of post-industrial neglect. It's a place where tourists and professionals pour into a bougie food court for $8 ice-cream sundaes, a new development that keeps locks on its restroom doors to avoid the horror of the area's sizable transient population daring to wash their faces.

Under head chef Doug Adams, Imperial, our 2015 Restaurant of the Year, delivered high-end dining on a grand scale that Portland hadn't seen in a long time. He successfully converted Imperial's struggling Southern-fried Cascadian fare into a spin on classic Americana that saw the creation of some of the best fried chicken and the finest Parker House rolls in town. Imperial's future is uncertain following Adams' departure in July, but for now, we have the "big city" restaurant Portland has been missing for years. $$-$$$.

Don't think: Order the drinking chocolate. It's pure luxury, a ribbon of molten velvet that tastes more chocolate than chocolate. Once you've come to your senses, pick up a bar or two of small-batch craft chocolate from whichever Portland producer the shopkeep recommends. $. 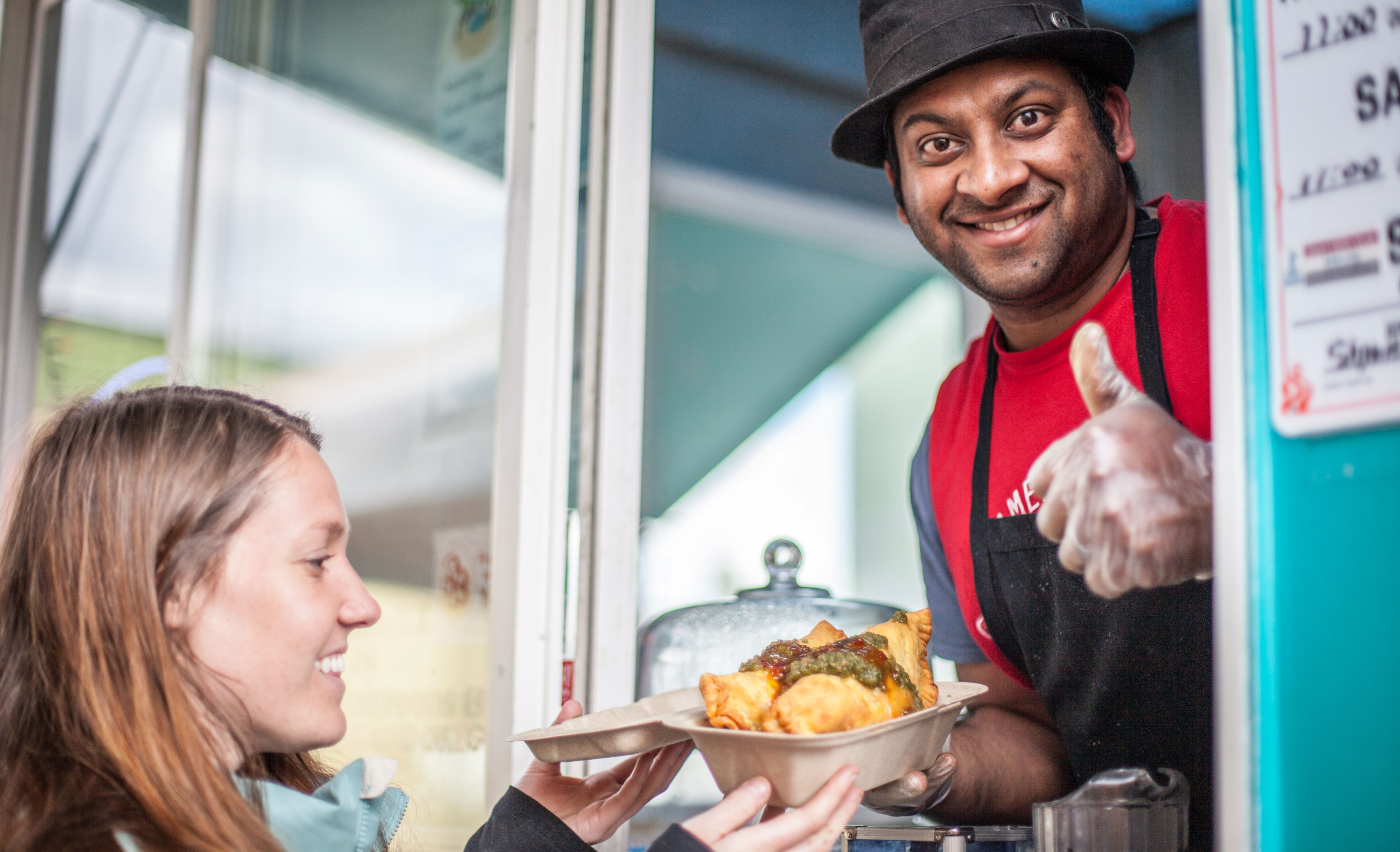 Chez Dodo is the only Mauritian food cart in the U.S., and operates as a sort of culinary embassy, with huge, potato-stuffed samosas functioning as the diplomats. The curries atop rice noodles recall yakisoba bento boxes and are spiked with a cilantro chutney that chef Shyam Dausoa rightly guarantees is the stuff of addictions. $.

Operated by a pair of Iraqi refugees, Dar Salam makes Middle Eastern staples—steaky kebabs with lots of sumac, super-creamy hummus, extra-nutty baklava—plus must-try specialties, including a pretty pink beet-and-yogurt dip and a unique version of shredded chicken shawarma served with a side of chickpea marga. $.

The Belizean chicken is the mainstay, but the pulled pork is among the best we've had in Portland, swimming in a rich bath of spices that in turn soaks into a bed of coconut rice. On Fridays, Love offers both meats on one plate for $10. Love is real. $.

The PDXWT breakfast sandwich—with its wild-style combo of duck bologna, sauerkraut, coffee mayo, egg and American cheese—makes Vitaly Paley's diner a singular attraction, a small piece of excitement for a day's work at one of the neighboring office buildings. $.

Inside, dark wood and dimmed lights dominate in a scene vaguely reminiscent of an old English pub, except with plenty of comfortable seats and, thankfully, much better food. Need an alternative to Higgins before seeing a show in the theater district? This can be your new spot. $$-$$$.

Wiz Bang Bar, the new soft-serve spot from the owners of Salt & Straw, is really fucking good. If you get a cone, you'll be reasonably happy—especially if it's vanilla dipped in chocolate. The sundaes steal the show, though, especially the Rhubarb Sour Straws. Trust us, it's worth the $8.50. $.

Bailey's is near-perfect, constantly humming with 25 taps listed on an electronic board, ambitious selections, and staff that knows its beer. If it's packed, you can walk around the corner, where a door leads to an upstairs clubhouse that has a small collection of high-end bottles and six taps, all pouring what owner Geoff Phillips and tech manager Nick Rivers want to drink.

Alongside the richest pub burger in town, Common Law serves inventive cocktails from a list created by Hat Yai's Alan Akwai, such as the frothy tumeric-infused, gin-based Tumeric Pick Me Up and the ethereal sherry, Bonal and honey liqueur Negative Cycle.

Behind the bar, a hidden hatch leads ice-gathering staff down the rickety staircase to an expansive basement holding traces of a Prohibition-era speakeasy. The staff recently discovered a rudimentary flush system, lending credence to rumors of a trough carved into the bar so that working men could let flow amid rounds of shots.

Despite it's grizzled facade, Yamhill Pub is a pleasant working-class bar with every inch of every wall covered with graffiti straight out of an NYC subway car in the '70s. The Yamhill blows through more PBR than any bar in Oregon, and is fiercely proud of it.

2nd Avenue's impeccably curated, hyper-organized embarrassment of vinyl riches caters to just about every taste imaginable, but no one in town carries more metal. With hundreds of artist tees hanging from the rafters, even the music haters among us should leave happy.

I don't know if you'll find a better collection of suits and tuxedos in a secondhand store in Portland or anywhere else. Avalon's very old-fashioned aesthetic belies a collection of well-cared-for formal garments that goes far beyond what's usually available, even at the city's best vintage shops.

California-based Bait expanded to Portland early this year and has quickly become one of the city's go-to spots for sneakerheads and streetwear fiends. Bait carries everything from New Balance to Saucony alongside limited-edition Air Jordans and Yeezys, streetwear and, somewhat surprisingly, action figures.

Whether you need a fine Italian suit or fine Italian drop-crotch sweatshorts, clothier Brent Collier has you covered at both his eponymous formal menswear boutique and his new athletic-wear-inspired venture with Portland native Alex Veltri.

Recently acquired by the Mitchells chain, the Marios—Bisio Sr. and Jr.—have been keeping the city's well-to-do in the finest of formalwear since Mario Sr.'s days at Lloyd Center in the 1960s.

For just under 100 years, the family-owned Portland Outdoor Store has been outfitting the city's urban cowboys in the finest clothing and boots from Stetson, Lucchese, Wrangler, Carhartt and more, with a supply of saddles and horse-grooming supplies for those lucky downtowners whose apartments come with a stable.

Serra's chic setup uses every opportunity to incorporate minimalist sophistication into the cannabis dispensary experience. Select a combination of six "feelings" when deciding your strain from the array of indigo-stained ceramic dishes: relaxation, focus, creativity, happiness, pain relief and energy.

The home of Portland's more competitive gamers, TVG's small, weekly Magic: The Gathering tournaments have better prizes than other stores' regional competitions, and the store's deeply knowledgeable (of games both board and card) staff will treat you like family. Time Vault isn't the largest or fanciest game store in Portland, but it's the best.

For more than 50 years, U.S. Outdoor Store has been outfitting those headed to the beaches, mountains, forests and cliffs of Oregon with the newest and best in outdoorswear, gear and apparel from leading brands like Arc'teryx and the North Face. If you can do it outside, this store has the stuff to make sure you do it right.

When only the absolute finest will do, Wildwood will sit you down over a drink and walk you through creating a bespoke suit, shirts, footwear or knit garments, all handmade in its Portland workshop. This process doesn't run cheap, but if you must have your herringbone merino scarves locally made, so be it.

Portland'5 Centers for the Arts

Whether it's national-level touring bands, world-famous standup comics, Broadway theater or the Oregon Symphony, chances are if a big deal is coming through town, it's going to be at the Schnitz, Keller or Antoinette Hatfield Hall.

Stumptown, 128 SW 3rd Ave., Don't think: Order the drinking chocolate. It's pure luxury, a ribbon of molten velvet that tastes more chocolate than chocolate. Once you've come to your senses, pick up a bar or two of small-batch craft chocolate from whichever Portland producer the shopkeep recommends. $.