Any future historians hoping to study the past year of life in Portland would be advised to start with Todd Gee’s social media accounts.

Four years ago, the videographer and bassist began posting short daily videos on his Instagram and YouTube pages, initially aiming to document Portland’s music culture. But even after the pandemic effectively made the city go silent, Gee kept filming.

“I knew I had to keep myself doing a creative thing every day or I might go more crazy,” he says. “It became a reflex, like making your bed every day; it’s the same, but that’s sort of the point.”

Gee’s video diary—over 1,100 entries and counting—consists mostly of his bike treks around the city, walking his dog and running errands and doing chores, with a gorgeous B-roll of the Portland landscape in between. It sounds mundane, but taken together, it forms a living timeline of one of the most significant years in city history.

“Capturing everyday things,” Gee says, “is a nice reminder of what you did each day outside the house.” 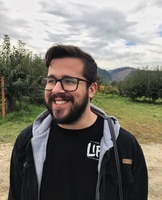 Sam Hill is a freelance journalist who has written for publications like Outside Magazine, Serious Eats, Eater and Boston Magazine.