I take it all back. Anything disparaging, unkind or even lightly mocking thing I ever said about Madonna. I renounce every bit of sarcasm in last week's Madonna paper dolls. I retract even the sighs of annoyance I sighed, before her show started Saturday night at the Moda Center, while a house DJ named Michael Diamond wore a raincoat and spun boring dance music for an hour while the screen over my head played visuals that looked like a '90s screen saver over and over.

Consider this my formal apology for all of the above. I know now that Madonna isn't irrelevant, boring or totally over. I humbly acknowledge that she is the Queen of the World.

Her show on Saturday started late—or at least it felt late, since we arrived on time and sat through an hour of the aforementioned DJ with but one drink. The DJ ended at 9 and it was almost 50 minutes before Michael Jackson's "Wanna Be Startin' Something" started blaring, the lights went down and the big Rebel Heart curtain that had been covering the stage dropped.

Then, the Michael Jackson music became Madonna music and dancers dressed as something like Genghis Khan-era warriors carrying tall medieval crosses appeared in front of a huge screen playing video from the song "Iconic," with Mike Tyson talking, and then Madonna inviting the dancers and the screaming crowd to join her revolution.

Then, because this was Madonna and this was the beginning of the best arena show I've ever seen, Madonna was lowered from the ceiling in a cage.

"Iconic" turned into "Bitch, I'm Madonna," which included the massive face of Nicki Minaj rapping on the screen, a warning to the legion of Gen-X women in the audience wearing mesh gloves that this show wouldn't be just for them.

Those early songs were just appetizers for the first really big number, a "Holy Water"/"Vogue" sexy Catholic bondage party that included stripper nuns, a living re-creation of Da Vinci's "Last Supper," a sexy priest and—I swear to god—the lyrics "Jesus loves my clitoris best." (Online it says the lyrics are "Yeezus loves my pussy best" but I stand by what I heard and I like my version a lot more anyway.)

Which reminds me: we need to talk about Madonna's dancers.

They can't really be called back-up dancers because a lot of the show was really about showcasing their extreme talents. Of course, anyone who dances on a Madonna tour is going to be a next-level professional, but these dancers went beyond that usual athletic, unbelievably bendy, music video "dancer-in-the-back" type thing. Each one, even from a distance, exuded a very specific and intriguing personality—and also, actual joy. In fact, in some ways the Rebel Heart show was really less of a concert and more a really good Cirque du Soleil performance, with live music, additional dancing and superior charm by Madonna.

There were a few moments in the production where the whole thing went beyond anything I've ever seen onstage. At one point a spiral staircase dropped from the ceiling down onto the tip of the stage which extended out into the audience and ended in a heart which looked like the tip of a penis. (Madonna thought so too. She even said: "It feels so intimate down here at the tip of my penis. Isn't it interesting that a heart and a penis are the same shape? God didn't make a mistake on that one. In my opinion, it's all about the dick.")

After the staircase came down, Madonna and her favorite dancer—I decided he was her favorite and convinced myself they were in love to which my boyfriend said: "She's a professional, Lizzy"—did a "HeartBreakCity"/"Love Don't Live Here Anymore" medley, which ended with both of them at the top of the very tall staircase and then Madonna pushing him off so he free fell through the air and through a hole that suddenly opened in the the stage so the audience never saw his impact.

Later, during one of the interludes for costume changes and water breaks (I assume), when a Madonna song would play but there would be no actual Madonna on stage, dancers sat atop tall polls and did a kind of crazy, bouncing, terrifying air dance to "Illuminati."

How many ways can I say, "Holy shit, it was so fucking cool"?

And then there was Madonna. I wasn't surprised that she put on a great show—any American human would know to expect that. What really shocked me was how personal she was, how real and oddly sweet. At one point, when she did the obligatory "Are you having fun, Portland?" thing, she added: "I am having a good time. I mean, this is nice work if you can get it." And the audience believed her. The show felt like a gift to her fans. Even the small mistakes felt right, like, here, look at this human. You love this human and she is doing this all for you! Whether it was "True Blue" on the ukelele or "Like a Virgin," which she sang all alone, running around the stage, not in a wedding dress but in pants, not trading on past glory but honoring the song and also who she is now. She missed some notes and that made it so much better. She's 57. She's putting on a show that would make an 8 year-old with ADD tired. And she's singing live, alone, on a stage in front of thousands of people. It's impossible to tell you everything. The show was one of the only ones I've ever been to where I didn't once think, "OK, I'm ready for this to be done." From the second her cage was lowered onto the stage, a little before 10 pm, to the end of her encore, "Holiday," which saw her whisked up into the air on a trapeze, at midnight, it was perfect.

There was crazy gender stuff, sexy bed dancing, dancing with a flying sheet, dancing on a moving screen. There was indiscriminate, unapologetic cultural appropriation, sacrilegious imagery, a lot of six-pack flashing, a matador dance. There were outrageous costumes, beautiful costumes, costumes covered in diamonds. There was the moment when she sat on what looked like a big red cake and said, "I've been married twice, you know. You've probably heard about it," scratched her knee and then led the audience in a "La Vie En Rose" singalong while she played the ukulele. It's been 30 years since Madonna came to Portland. In 30 more years, she'll be 86. I hope she comes back before then but if not, I think I'm willing to travel somewhere else to see her again. I'd like to make my apologies in person, genuflect, ask for forgiveness. I am sorry I ever doubted Madonna. She is right. She is the queen.

All photos by Emily Joan Greene. 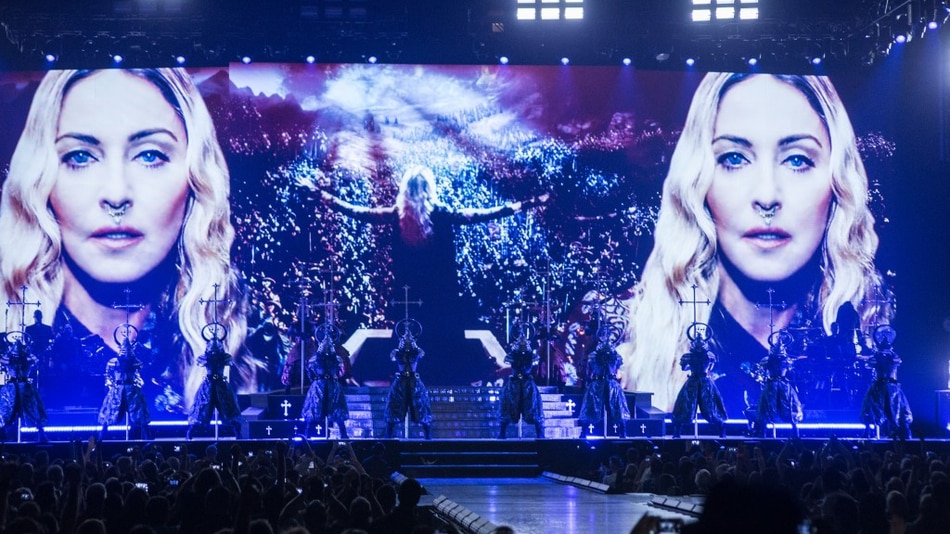 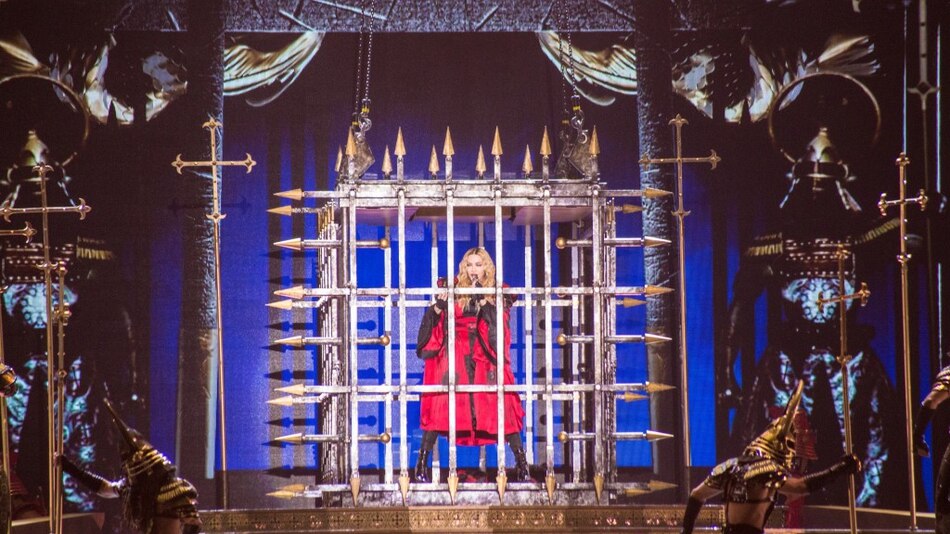 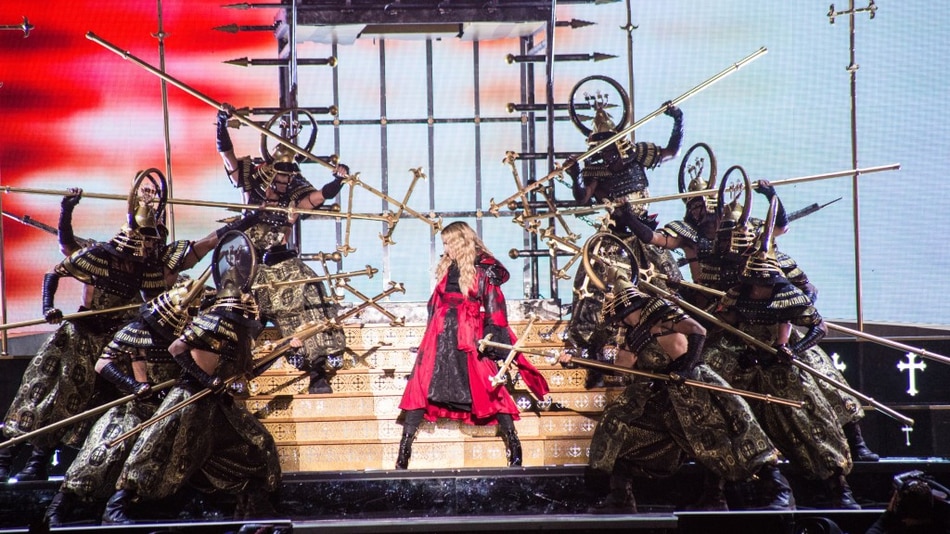 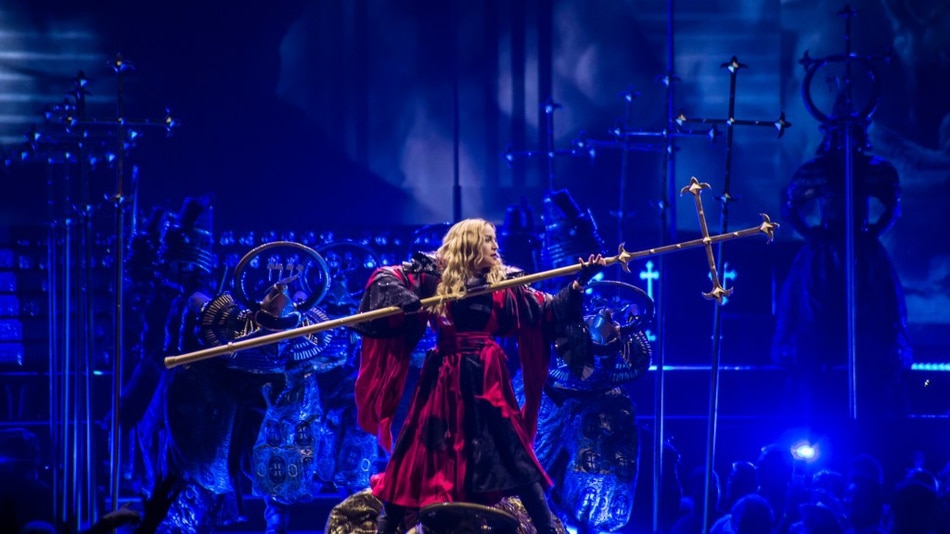 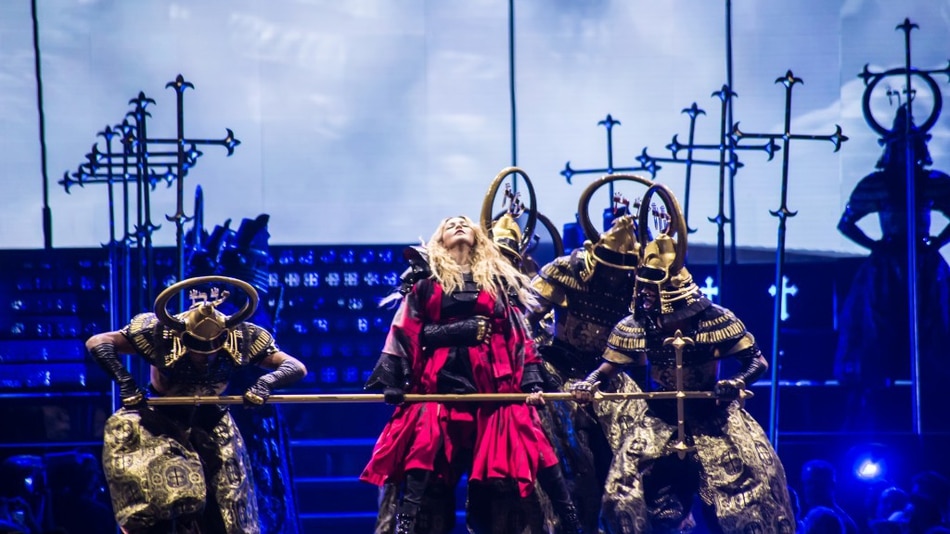 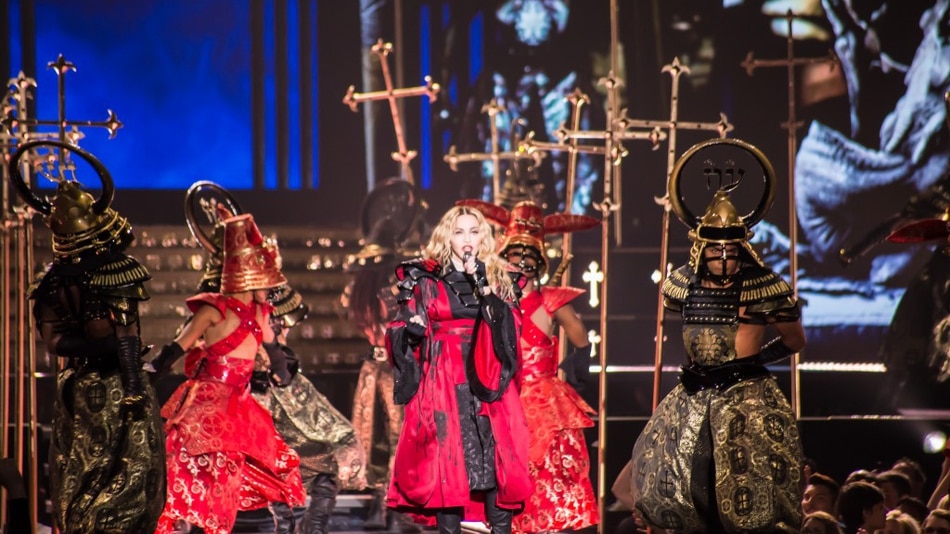 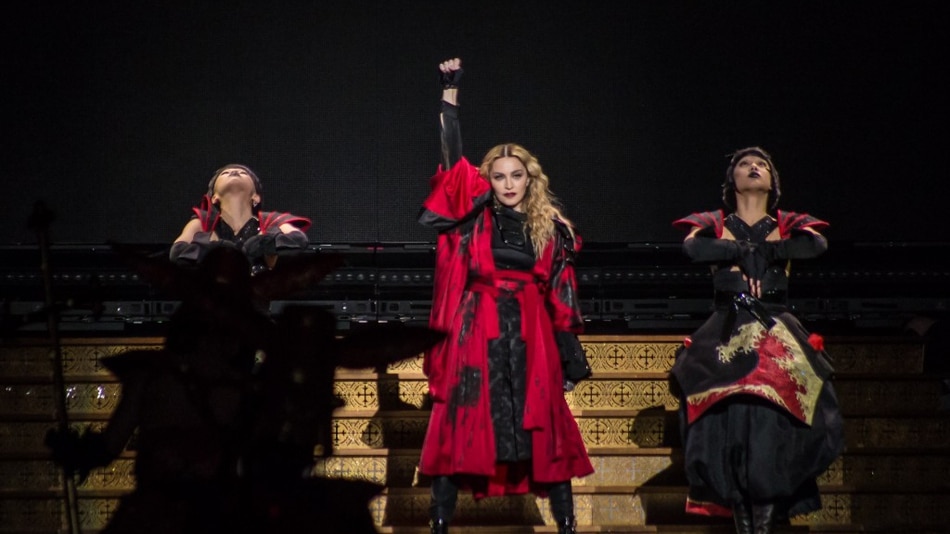 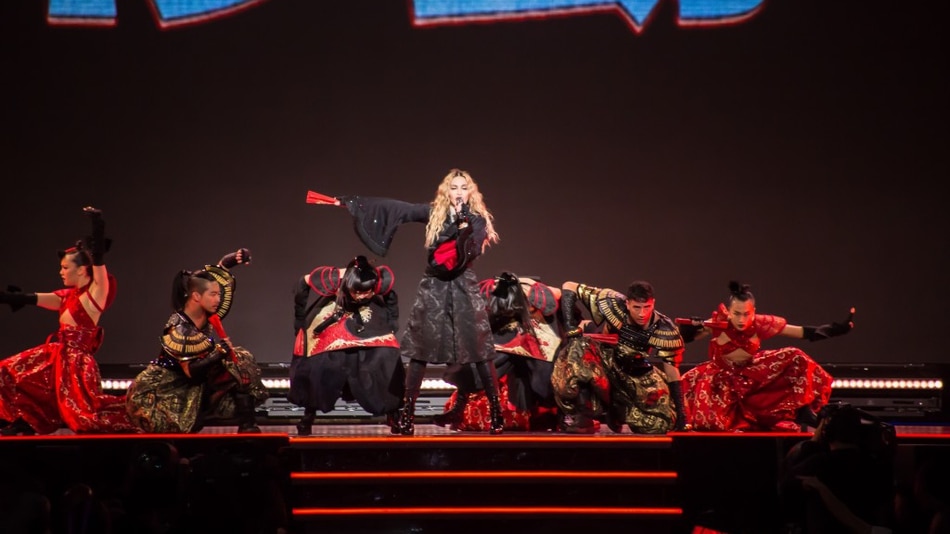 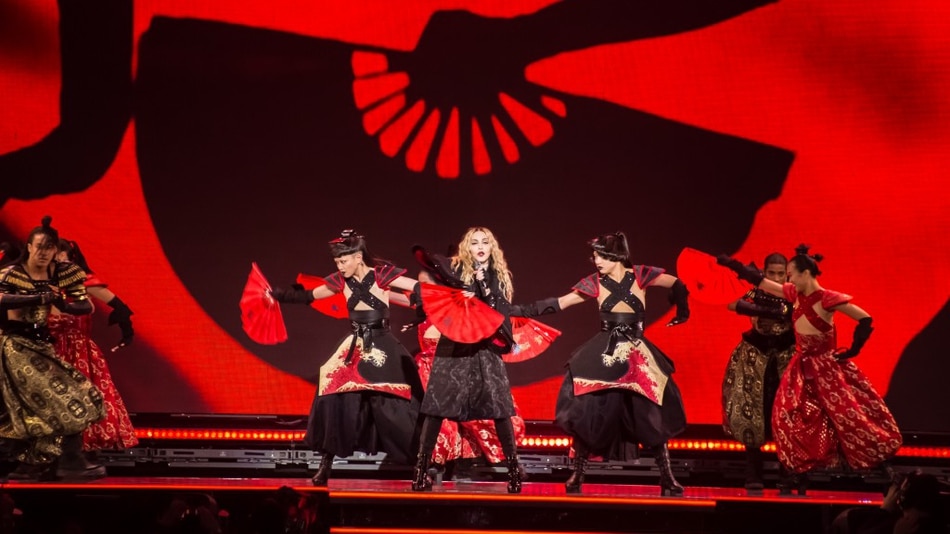 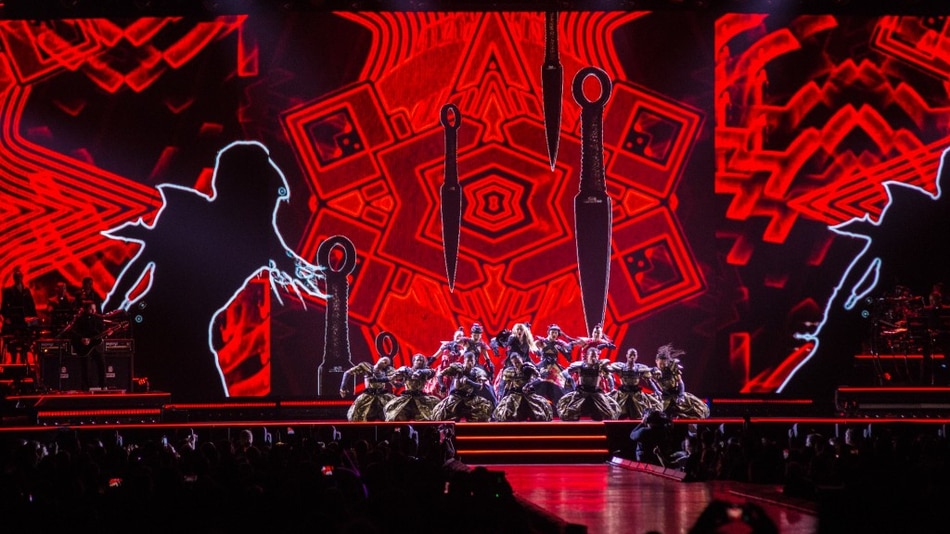 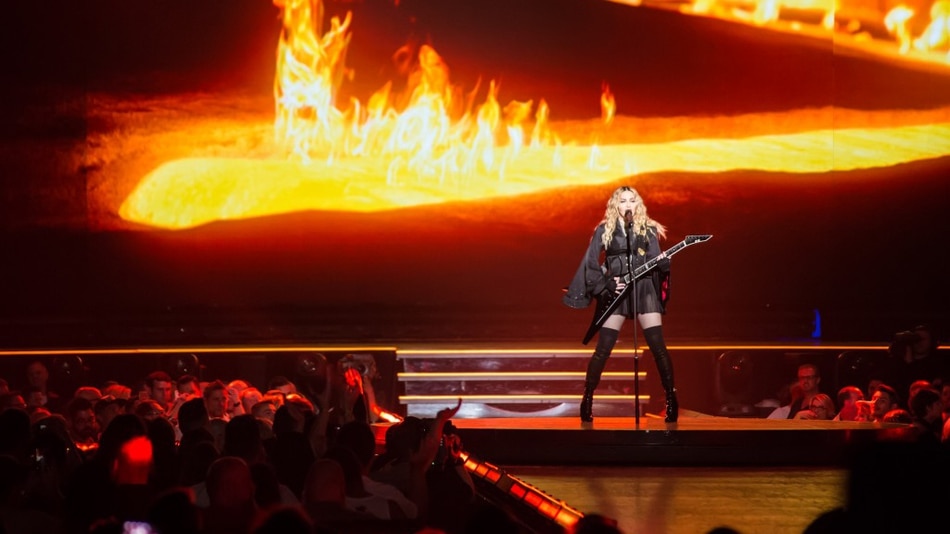 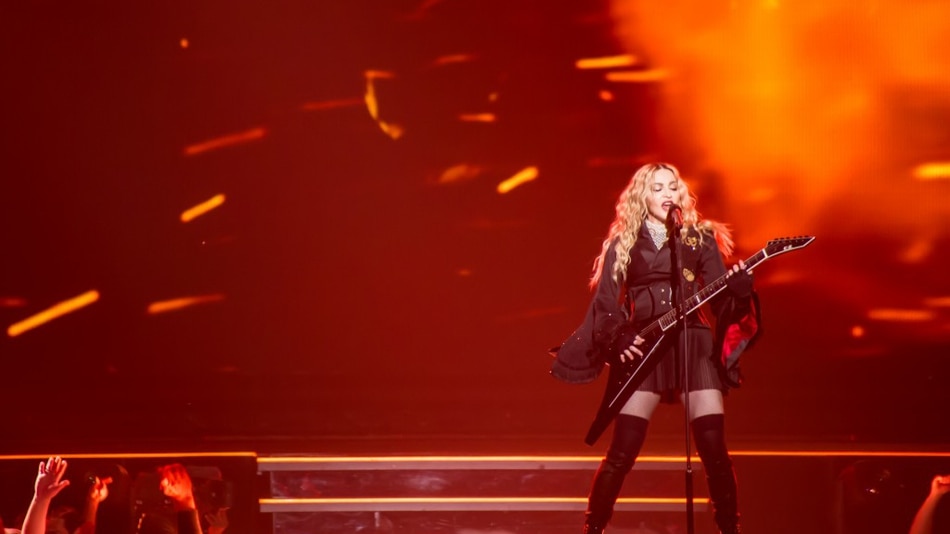 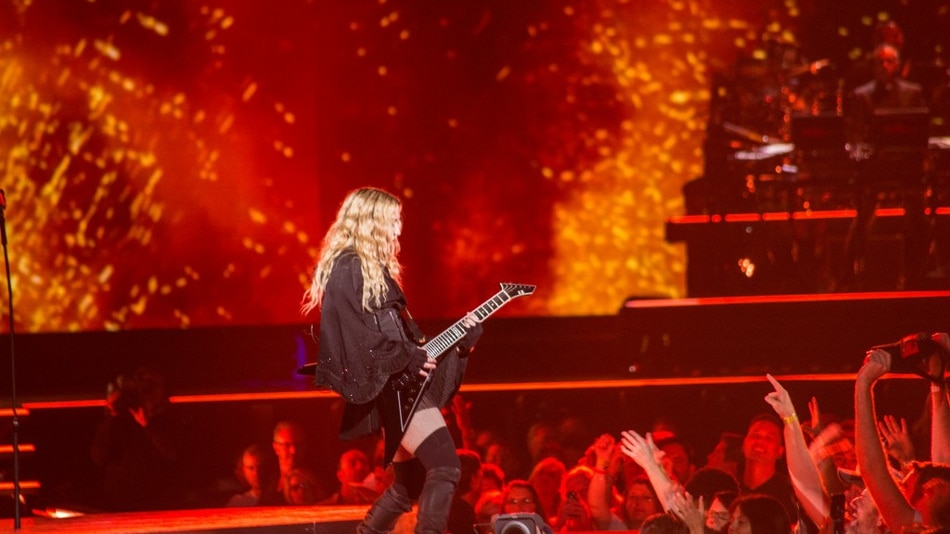 Lizzy Acker is Willamette Week's former web editor. Her first book, Monster Party, came out in 2010. She was born in Oregon, lived in San Francisco for almost eight years and then moved back to Oregon, just like everyone always knew she would.