When Fabi Reyna decided to start her own guitar magazine, her motivations were twofold. First, she wanted to change the way women are portrayed in such publications—which is, either posing half-naked or not at all. Secondly, she wanted the fringe benefits of a career in journalism; namely, free concert tickets. Three years and nine issues in, She Shreds has grown beyond what she imagined, becoming not only a showcase for contemporary women musicians but a historical journal as well. And, as Reyna—a Mexican-born Portland transplant, who formerly played bass for the Ghost Ease—told us, it hasn't gone unnoticed by the industry, either.

Willamette Week: What was the impetus for starting She Shreds?

Fabi Reyna: I've been going to the Rock'n'Roll Camp for Girls and playing guitar since I was 9, and when I was getting out of high school I was really frustrated with the lack of women in guitar magazines and in mainstream media. I never felt represented in those outlets. So I got out of high school and came to Portland, and I was in this band called Sex Hair. I was supposed to go to college, to Cal-Arts, and I was like, "I'm going to go on tour instead." And when that band broke up, I was like, "What am I gonna do now?" I had been saying the words "she shreds" at shows in Portland, and it sort of dawned on me when I found out about [women-focused drum magazine] Tom Tom, that I need to make a magazine about women guitarists. The whole idea originally was just to continue on with the community of women musicians supporting one another. The more we continue with the magazine, the more we realize there are so many women who are underrepresented in the history of rock'n'roll and genres across the board, and we sort of became obsessed with the idea of being not only a platform for the voice of women musicians but a platform that redefines the history of guitar, and also the future of the guitar industry.

Were there specific things you were seeing in guitar magazines that you were reacting to?

Those images that are in mainstream guitar magazines create a stigma about women playing instruments. That's the immediate, obvious thing. Obviously, these guitar magazines that are portraying women as sex objects aren't thinking about the female demographic. It's not matched by an amazing article on how much this woman shreds. There are pictures of these women half-naked, and that's it. That frustrated me because I didn't relate to that. But the more I thought about it, these songs, these people these magazines portray as idols, I don't relate to. When I went to the Rock'n'Roll Camp for Girls, I was like, "Wow, there are so many other musicians and types of playing you don't know about when your main source of learning guitar are these mainstream magazines." I really keep in mind that there are so many different ways of learning, and different idols and role models that shaped the history of guitar. Based off those guitar magazines, I was told there's this one specific way of learning, there's these five specific people that impacted the guitar industry, and that's it. My main focus is to give people different options and different perspectives and tell people there's not just one way of learning. Here are the tools, you do whatever you want with it. 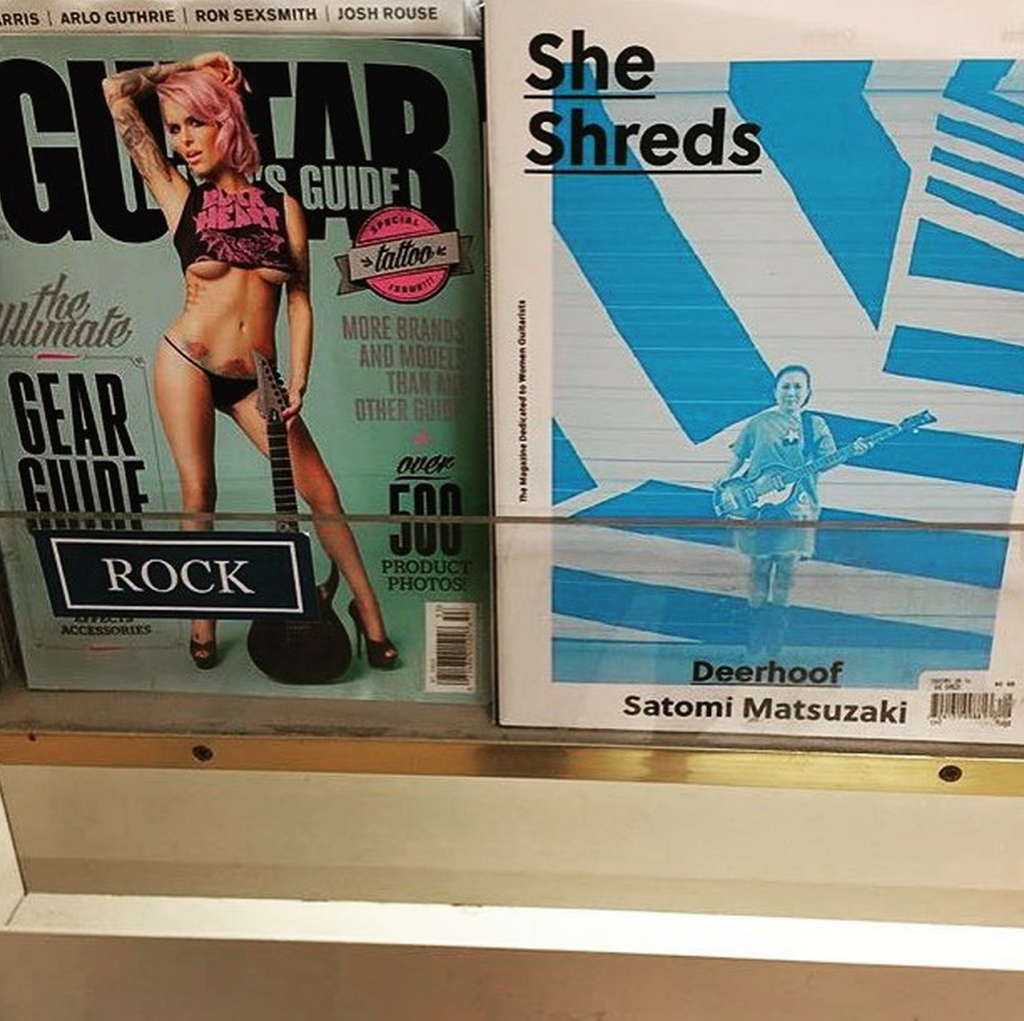 When you decided to do the magazine, did you have any experience in publishing or journalism or anything like that?

That was the craziest part about this, I think. I knew I was a guitar player, and I knew I was excited, but initially my goals were, I want to talk to my favorite guitarists, and I want to go to shows for free. [Laughs] A few months later, I was like, "Oh shit, I have to learn to be an editor. I have to learn to write, to take care of sales and sell ads." It's a crazy process, and I didn't go to school for it. And I failed English in high school. I can remember in high school being like, the one thing I'll never do is be involved with newspapers. And here I am. That's what I do now. But I think what was so exciting about it was the idea of going into something I had no idea about. It's what drove me to keep going. When you start something and have no feedback, and no one is telling you, "This is cool," you have to figure out how to keep motivated. I've learned so much through this whole process, of being an editor and how to run a magazine. It's a crazy, crazy thing.

What've been the most interesting things you've learned about this kind of secret history of women in guitars through the process of doing the magazine?

The way I find these women is, it'll be in someone's Wikipedia page, and their name is really quickly said, and I'll click on it and be like, "Whoa, this woman was a steel guitar player the first year the guitar was created. I wonder how much impact this woman actually had on creating this genre." But you never really know. These women existed, but you have no idea what their role was. I expected this going into it, but I didn't expect the amount of women I've found out about. It's pretty huge. These women were sometimes around for three years, and then disappeared from the scene. And it's like, why? Did these guys, these guitar players, feel threatened? I just keep asking, "Why did no one pay attention?"

Who are some of those women you're referring to?

Well, in Hawaiian steel guitar, there's hundreds of women steel guitar players who were around during the early 1900s, and you don't know that much about them. You have to really dig to find about them. And then there's [Kathy Marshall], who apparently outperformed Dick Dale. She's talked about a little bit, in documentaries, but there's no photos of her or anything. She's one of the people I was shocked about, because there's nothing about her but she was apparently this incredible guitar phenomenon. Dick Dale was totally threatened by her. People say he was either super impressed or super not cool with it.

What are some stories you're really proud of through these first three years?

The issue I'm most proud of is Issue 5, which focuses on Mexican guitarists. We talked to this woman who has her PhD in Women in Mariachi. She's been studying it for 17 years, she's discovered so many mariachi women from Mexico, she's interviewed the families. She gave us a timeline of mariachi from the perspective of women being involved. It was really eye-opening, because this genre that is so male-dominated—the macho culture is super intense—and you look at it and there were so many women involved. You don't think of mariachi involving women. 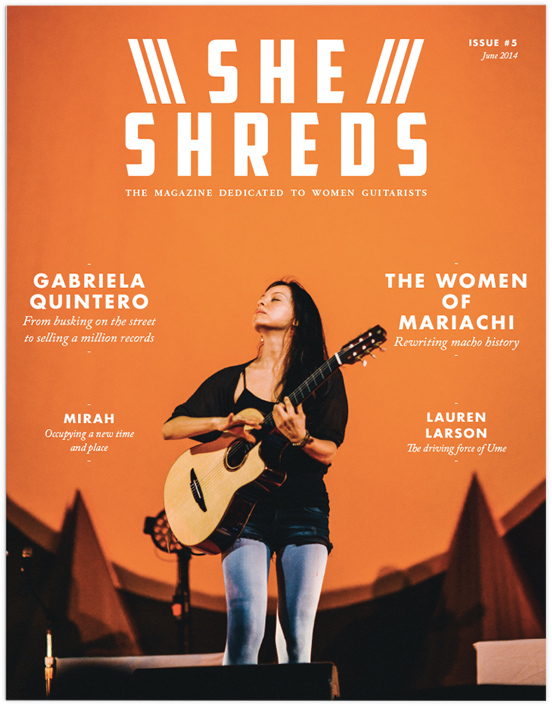 What changes would you like to see happen in the guitar industry?

The biggest thing is inclusivity—within language, the way people teach, and aesthetically, too. The guitar culture for so long has been geared toward men, and it's so clear. There's no way of hiding it anymore, and the way people talk about it and everything, we have to redefine it at this point. These words we use, like "shredding," for example, when you think about it, you think of Van Halen, and the whole idea of that word, it doesn't necessarily have to mean how fast you are technically. It can mean how much emotion you evoke.

You've managed to, in a small way, fix one corner of the guitar industry. Can you do something about Guitar Center next?

You know, they were actually one of our first advertisers. We had just put out our first issue, and the woman in charge of the Pacific Northwest division really believed in it. I've always had a weird feeling about Guitar Center. Every time I've gone in there, as a teenager, it didn't feel comfortable. She made it really clear to me that they're trying to change. They're really aware of what their past looked like, but they want to work with Tom Tom and She Shreds to get better. They've got a long way to go, but they're working toward progress.

If you want to find information on Annie Kerr, you have to really dig to find much. Although there's only a couple of recordings and photos portraying Annie and her work, many experts cite her as Hawaii's first professional Wahine steel guitarist. Annie Kerr and Her Trio was an all-woman steel guitar trio popular in the last 1920s.

Now dubbed by some as "the Queen of Surf Guitar," there are zero recordings and just a few pictures showcasing the then 13-year old double-picking phenomenon. While she often shared the stage and dueled with bands such as Eddie and the Showmen and the Turtles, perhaps the most famous legend involves a duel between Dick Dale and Kathy Marshall that caused Dale to put down his guitar and walk off after being upstaged by Marshall.

Thanks to Dr. Leonor Perez, who has dedicated the past 17 years of her career to exposing the impact of women on mariachi music, we know that in 1948, Las Adelitas formed Mexico City and became the first all-woman mariachi group.

Born in 1904 with a nearly immediate hunger for music, Adams was an incredibly respected musician in the New Orleans jazz scene who began playing music at the age of 7. She's recognized by many as an important figure during the development of jazz.

Letritia Kandle was not just an amazing player, teacher and orchestra conductor during the 1930s steel guitar craze, she was also an innovator of stringed instruments. In 1937 Kandle and her father created the very first non-lap steel guitar ever made. Part lap-steel, part organ, the Grand Letar featured the first-ever two speaker amp, three six-string necks and two four string necks that were capable of producing full organ sounds as well as vibraharp sounds. The Grand Letar even changed colors with the tones she was playing. She was a genius.