Much of Portland guitarist Marisa Anderson's work is rooted in the Appalachian music tradition. With her new album, Into the Light, however, she turns her focus to Arizona's Sonoran Desert. Influenced by guitar-based scores for desert-fried films like Ry Cooder's Paris, Texas and Bruce Langhorne's The Hired Hand—plus, of course, the indelible Ennio Morricone—she's written the soundtrack for an imaginary sci-fi Western with contemporary political resonance.

"The seed came from contemplation of the word 'alien,'" Anderson says. "It can either mean someone from outer space, or just someone not from the U.S. I thought that was a pretty weird and messed-up tic in our language—you're either from the U.S., or you're from outer space. So I built a character who drops into the desert, an unnamed spot and an unknown time, and it's like, where is he? In Mexico? In the U.S.? In a future that doesn't include either of those things? Why does it matter? Who would he encounter, and with no sense of context or history, what would those encounters look like?"

Of course, being that the movie doesn't actually exist—and the album is instrumental—those images live entirely in Anderson's head. So we asked her to describe what's playing behind her eyelids as she plays each track.

Related: "For a rootless roots musician, words are very unnecessary."

"Into the Light": The first one is like the title sequence. When I see that one, it's like, the spaceship falls to earth, and we get the title and some figure walks out. It's the setup.

"Waltz of Shadows": That's like the classic Western saloon, maybe a little bit ominous. There is a trope, right, where to set up a Western. There has to be a saloon scene, and there's the piano player and the lady with the big dress. And there's some dancing. That's that scene.

"The Old Guard": The title's a little bit of a play on words. There is a bit of a guitarist jab in there, because it's kind of a wanky blues. I was thinking of "the old guard" as some sort of Clapton-esque dude shredder in a bar band. That one doesn't have a really worked-out visual but—and maybe this is implied in the name—that would be the moment where our hero meets an adversary.

"He Is Without His Guns": That one has a very specific image from my own life. It's about when I was 19, and I was hitchhiking with some friends up to Northern Arizona. And we were dropped off in the middle of the night in the middle of nowhere—not a building in sight, nothing. Our ride was just, like, "Get out." We walked a little ways off the road, laid down in the dirt and went to sleep. And I woke up in the morning, the sun was rising, and on the horizon there were three guys on horseback, coming straight toward us. So that's the specific memory transposed onto whoever this protagonist is—that feeling of complete helplessness, and just giving in to whatever's gonna happen.

"Chimes": It's also kind of like an early-morning, "where am I" song. There's a certain kind of wind that happens in the desert, when the sun comes up. It's cold at night and hot in the day, but when the sun starts to come up, there's this little wind that will happen often, because the temperature difference is starting. I was really consciously trying to make that sound and feeling.

"Resurrection": I don't have a super-clear image for that song, although it's obviously like coming back into life or strength. I remember that I wrote and recorded it on Easter so that's also why I called it "Resurrection."

"House of the Setting Sun": I feel like that one was real classic—that's just, like, just be out in the desert and make desert sounds. Maybe there's a little nod to Ry Cooder there, with the slide.

"The Golden West": To me, that's a real sunset song. Just rolling to sunset.

"End of the Night": It's set in a bar again and it's the very end of the night, everyone kind of drunk. If there were three bands [on the bill], they're all onstage, playing one song really loosely—sort of like a big jam on a three-chord song with everyone just being really sloppy and loose, and that's the credits. And that's that. 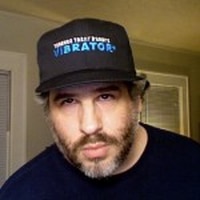 One of WW's longest-serving writers, Jeff Rosenberg has contributed to the Music section since 2000. He hosts The Songcircle every Friday from 1:30-3 PM on Portland's KBOO Community Radio (90.7 FM; kboo.fm).