We got together with three of Portland’s most hardcore Durannies to discuss their decades of devotion.

About 10 years ago, in Atlanta, Duran Duran bassist John Taylor had a cold—and a fan wanted it, too.

"We did this live Q&A on the stage at a venue, and then we did a concert that night at the same venue. I was blowing into these fucking tissues all the way through the thing," he says. "Then we went back to Atlanta a few months later for something. This girl comes up to me and goes, 'Oh my God, I took your tissues because I wanted to catch your cold.' You wanted twisted, you got it!"

Twisted? Maybe. But at this point, you shouldn't put anything past Duran Duran fans. The band has always inspired a particularly acute sort of mania in its admirers, ever since it zoomed out of England in a synth-powered speedboat in the early 1980s. While the members fancied themselves as aesthetes—the stated concept when they first started was to somehow mate the raw aggression of the Sex Pistols with the sophisticated funk of Chic—their rakish style and carved-from-clouds good looks made them quintessential pop idols, a designation they've both played up and pushed back against at varying points in their career.

"I don't think anyone really gets to choose," Taylor says. "You want to be a successful musician or songwriter, and I don't know if it always works out exactly how you planned it. Not that I would change anything. It's been a beautiful ride."

It's a ride that's gone through peaks and valleys, but one that's stayed on the rails mostly because of the unerring adoration of the band's most fervent devotees. With four-fifths of the core group coming to the Waterfront—guitarist Andy Taylor, always the least comfortable being pursued by tissue-coveting fanatics according to John Taylor, departed for the second time in 2006—we got together with three of Portland's most hardcore Durannies to discuss their decades of devotion.

Moment of discovery: "I saw the 'Planet Earth' video on either MTV or Night Flight. It was different—it was artsy, and they were beautiful. It was just a visceral connection. My world was very tumultuous growing up. There wasn't a lot of stability, and there weren't a lot of adults to rely on. I just latched onto them, and they never disappointed. They're the only people in my life who haven't let me down—except for maybe the Liberty album."

Favorite member: Simon Le Bon. "When I was growing up, it was Nick Rhodes one hundred-thousand-million percent. And now I'm all about Simon Le Bon. I don't know why. I was trying to pinpoint it, and I think it was first time I met them, which was here in Portland. I don't know what it was about that moment."

Favorite deep cut: "The Man Who Stole a Leopard" (All You Need Is Now, 2010). "That's my first Duran Duran tattoo. I can't believe it took me 30 years to get a Duran Duran tattoo for a song that just came out. It's got that nonsensical Simon Le Bon stuff I love."

Craziest act of fandom: "It was down on the waterfront for Z100's Last Chance Summer Dance in 1999. I made out with Christina Aguilera's sound guy to get backstage—among 75 other things. I got a VIP pass, but I couldn't get backstage with that pass. I saw a 12-year-old with the pass I needed, so I gave him $5 and we switched bracelets. I also spoke in a fake British accent and was carrying a clipboard. So I saw the guy, and he was making the eyes at me. He was cute enough to make out with. I had some French kissing action, and the next thing you know, I'm meeting Simon and Nick."

Most treasured piece of memorabilia: "I have a giant Medazzaland promo sticker. It's like 2 feet by a foot, and it's silver and sparkly. So that's sort of weird. I mean, Simon Le Bon's hand on my ass is really the most treasured memory I have." 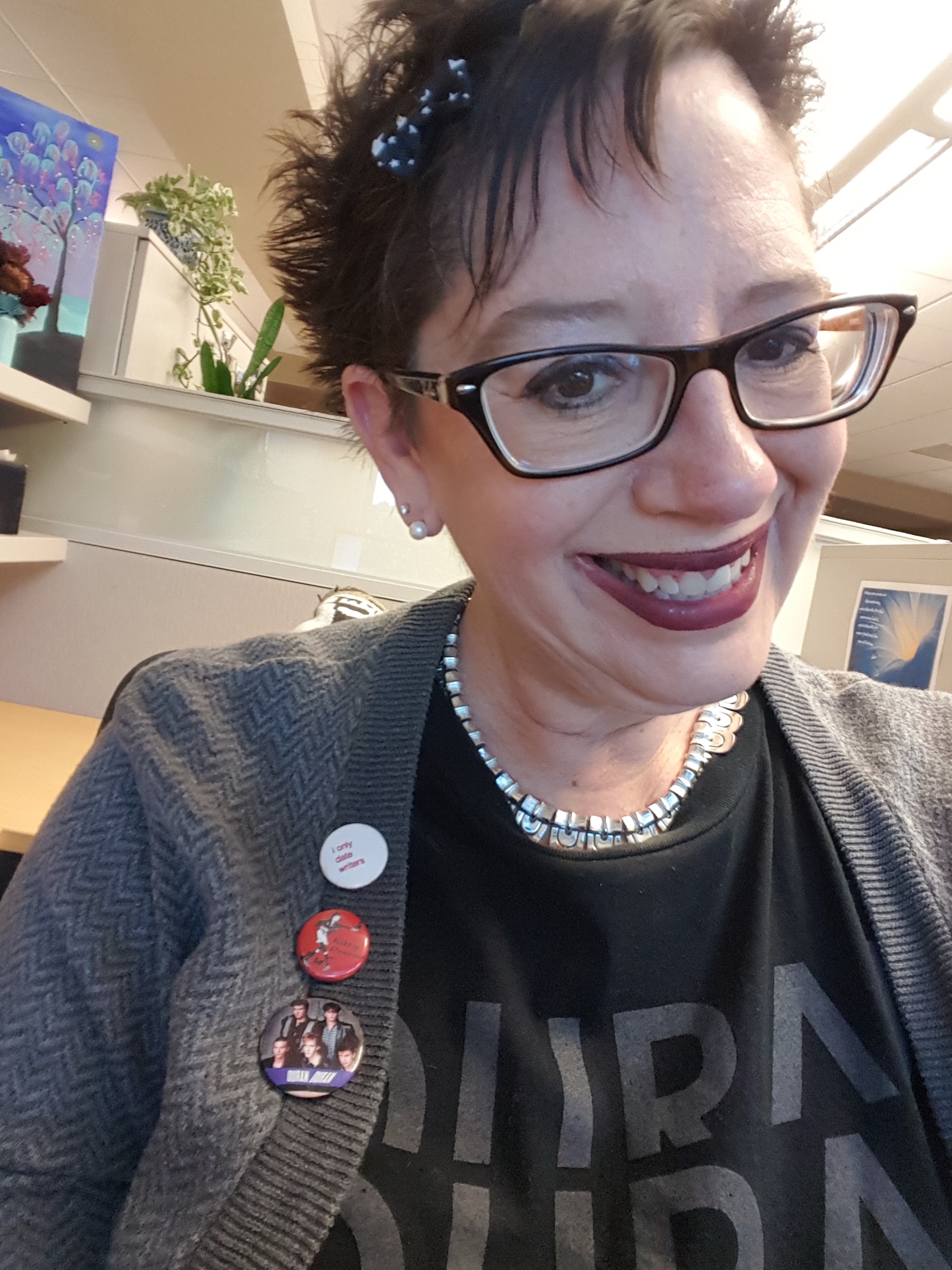 Moment of discovery: "I grew up in a small town, North Bend, in the Coos Bay area. So being able to see MTV at the time it came out was quite a big deal for what I saw as a conservative, isolated logging town. I'm pretty sure the first video I saw was the rated version of 'Girls on Film.' There was something I immediately became obsessed with, and not just for their looks. I started collecting, and that became even more of a thing, to get the most unusual 12-inch single, the B-sides, the picture discs, the imports. And living in this small town, I can see it now as the force moving me out of there. I felt like this would somehow be my introduction into this other world."

Favorite member: John Taylor. "I was always a Simon girl, due to his glam looks and charisma, plus the dramatic, uniquely poetic lyrics—that is, until the band (and I) got older. With age, I just think John seems more genuine, which, to me, is more handsome."

Favorite deep cut: "The Chauffeur" (Rio, 1982). "For its hotness, its melody, its mystery—and it is so sexual. It has this deep, throaty, low, yummy sound."

Craziest act of fandom: "This story has turned into lore among my friends, and of course it gets more exaggerated every time I tell it. It was in Vegas in 1999, at the Hard Rock Hotel. I climbed up a wall to get into the VIP lounge where the band was. It wasn't that high—I just hopped up on the back of a chair, threw my leg over, pulled myself up and hopped on in. But it's escalated into this thing where I'm scaling the side of the building in suction cups with grappling hooks. I wasn't being too obnoxious until after a couple other drinks. Simon was at the bar with his back to everybody, in the 'don't bug me' posture. I tapped him on the shoulder and I said, 'My friend over here is wearing red leather pants, and she wants you to smack her ass.' I'm not sure why that wasn't a good enough invite. He said, 'I'm kind of busy right now, and you're going to have to step back.'"

Most treasured piece of memorabilia: "When I was a kid, if there weren't pictures of them in magazines, I would cut out just their names. Just their names—'Simon Le Bon'—in tiny, tiny newsprint, that I kept in an envelope. I still have it."

Moment of discovery: "I want to say it was the 'Careless Memories' video. And I remember when I first saw it, I was blown away. I'd never seen style like that in videos before. I was 12 years old, and I was like, 'If I can grow up looking like any one of those fine gentlemen, I'd be OK.' Being a boy in high school and liking Duran Duran was not cool. But being one of the two guys in school who likes Duran Duran has a benefit, because the majority of the fans are female. I was a skinny, tall, lanky nerd in high school, so it didn't matter one way or another. But at least they would talk to me."

Favorite member: Simon Le Bon. "He had the style, and all the girls liked him. The live video for 'The Reflex,' with the white jacket? Oh man. I just want to sit down and talk with him, have some beers and just bullshit."

Favorite deep cut: "My favorite isn't one song but the complete second side to a little-known album they did in 1988 called Big Thing. That's one of my top Duran Duran albums of all time. There's a song called 'Do You Believe in Shame?' and that's a great song in itself. But from then on, the entire Side 2 is like one big, long piece. It's beautiful."

Craziest act of fandom: "I don't really have a crazy thing. But the one thing I'm most proud of is, my son's first concert was Duran Duran, about two years ago, when he was around 9 or 10. He wanted a 'Planet Earth' shirt, and he was really excited to see them.

Most treasured piece of memorabilia: "This is the first time I've ever publicly admitted this, but my friends and I would do scrapbooks. We'd cut pictures out of Bop magazine. It was just something to do, with collectibles and all that stuff."