[EMPIRICAL FOLK POP] Nick Jaina has spent the past 15 years perfecting his particular brand of plain-spoken indie folk, and with his ninth album, the essential and well-worn Brutal Lives, he's finally whittled his sound down to breath and bone. It's also the broadest album he's ever released, seemingly woven from the many sides of his songwriting persona. Between the hushed reverie of opener "Not a Machine," beset by blips and found-sound detritus, and the lush, Peter Gabriel-ish plume of "I Have That Same Tattoo" is album centerpiece "Belle Isle," itself split between aching acoustic creep and anarchic electric squall. The sound of fireworks arches over the whole song like some sort of sad celebration, singeing its disparate parts together. Belle Isle, an urban park in Detroit just across the river from Canada, was taken over by the state of Michigan a few years ago, and since then has seen a slight resurgence. It's no surprise that Jaina gravitates to such a place—Brutal Lives is an album about resurrection, not only because it's pieced together from years-old projects, but because all 14 of its songs feel like they're breathing new life into a decade and a half worth of the singer's songbook. 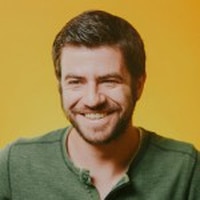 Dom Sinacola is a writer and editor originally from the Detroit area, which means that Robocop is his favorite movie, as required by law. He's an Assistant Movies Editor at Paste Magazine, occasionally writes for Kill Screen and FLOOD, and he's edited for/founded plenty of dead publications, because that's the world we live in now. He also co-hosts a podcast about "Pretty Little Liars."