It's the second time in two and a half years structural concerns have forced the century-old venue to cancel a concert.

For the second time in two years, the Crystal Ballroom was forced to cancel a show as it was happening due to structural concerns.

Last night's sold-out Rae Sremmurd concert got called off not long after the opening DJ took the stage after staff noticed a crack in a column in Lola's Room, the bar underneath the main concert hall.

"We decided it'd be best to be safe instead of sorry," says Jimmy Biron, director of music programming for McMenamins.

Rae Sremmurd later Tweeted a photo of the damaged column: 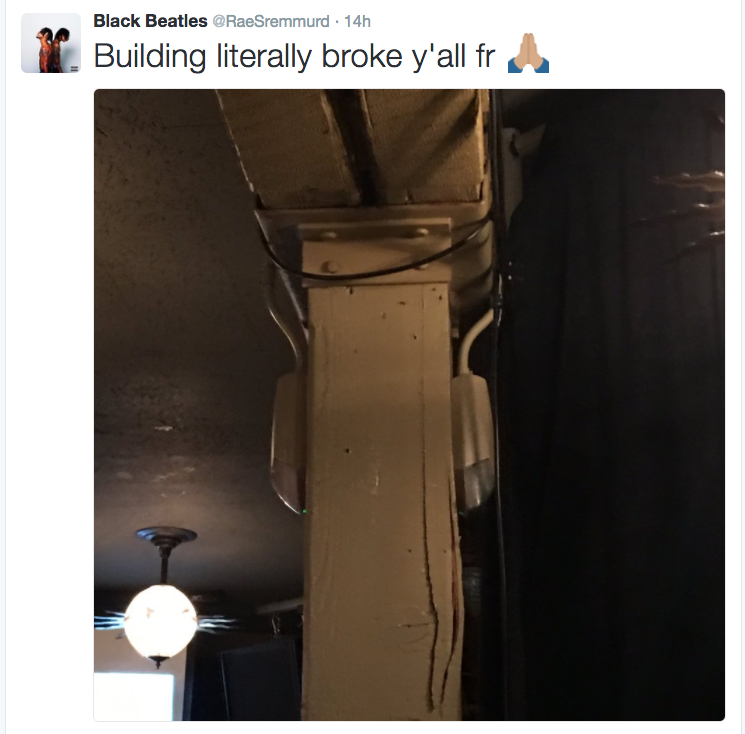 At the Crystal in 2014, a show by rapper Schoolboy Q got shut down early for similar reasons. In that case, damage to a structural beam caused the concert to get shut down 20 minutes into the headline set. Last night, the show had just started and Biron says the venue was nowhere near capacity.

Biron says engineers visited the theater this morning to assess the extent of the damage. He says he does not anticipate having to postpone any upcoming shows.

"It's one of the old wood columns, and over the years we've had to strengthen or replace them," he says. "It's not a difficult process."

Biron says they're already working to reschedule the performance, and that anyone who wants a refund can contact the venue.