Share on Facebook
Share on Twitter
Share via Email
By Blake Hickman |
Published April 25, 2017
Sounds Like:  Finding empowerment at a house party.
For Fans Of: Lizzo, the Last Artful Dodgr, Big Sean.
By rap standards, Karma Rivera was a bit of a late bloomer. Most rappers start crafting their flow as teenagers. Coming from a working-class family with no musical inclinations, Rivera didn’t pick up a mic until age 20.
“A funny early experience I remember is when I was asked by my friend to write 16 bars for a song she wanted me to feature on,” she says. “At this time, I had no idea what 16 bars was. I ended up writing a verse that was longer than the song.”
She certainly knows her way around a rhyme now. Rivera has established herself as one of the brightest rising stars of the Portland hip-hop scene through a combination of strong performances—including a fiery set at Glenn Waco’s all-female We Take Holocene 3—and killer singles. Lyrically, Rivera’s calling card is her rare ability to balance keeping it real with being clever. For an example, see her scorching cameo on the Jai Kelli track “Ride With Me”: “Are you done with the games yet?/Can we communicate other than that plain text?/’Cause my tolerance is thinner than a latex/And niggas nowadays make me wanna fuck the same sex.”
Unlike many recent transplants to the scene, Rivera has been living in the Portland area since moving from Chicago to Vancouver, Wash., as a teenager. Her breakout moment came in 2015, when rapper Vinnie Dewayne gathered some of the city’s emerging women MCs for the Portland Female Cypher short film. The clip acts as a Polaroid, capturing artists like Blossom, Vytell and Alia Zin on their way up the ladder. But it’s Rivera’s arresting introductory verse that steals the show—as she often does.

“I love performing,” Rivera says. “It’s the reason why I like recording music, just to get onstage and perform. Something about entertaining the crowd and feeding off their energy. I love it.”
Part of what makes Rivera such a refreshing presence in Portland is her ability to turn up a crowd while bluntly offering her perspective as a female MC. “They say be Madonna/Don’t ever be the hoe/But why be a saint when she’s never in control?” she raps on “Good 4 U,” a song that wrestles with the question of wanting someone but not wanting to compromise your own integrity for them.
“I want to be remembered as somebody that tried to respect her integrity as an recording artist and as a person,” she says. “I don’t want to be in any box. I don’t want to be one thing. I don’t want to be pinned solely just a rapper, because I’m more than that. Much more.”
SEE IT: Karma Rivera plays Holocene, 1001 SE Morrison St., with Via Rosa, Vinnie Dewayne and Brown Calculus, on Wednesday, April 26. 8:30 pm. $8 advance, $10 day of show. 21+. 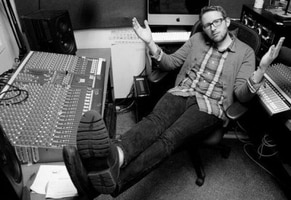 Blake Hickman is a Portland native who has been irritating people in local music since 2013. He is an avid listener of 99.5 The Wolf and is currently working on a series of essays about the members of New Edition. He is a strong opponent of all forms of music scene nepotism that he does not benefit from.