In the 1960s, '70s and '80s, the funkiest place in Portland was the Albina neighborhood. R&B, funk and disco bands lit up the area's clubs, churches, parks and rec centers. But without many opportunities to record, when the era ended, many of those acts simply faded into the footnotes of history. One local DJ, though, is working to revive and preserve that rich legacy. Bobby Smith—host of XRAY.fm's Night School—has spent the last decade collecting a trove of unreleased recordings and old photos proving that, at one point in time, Portland was home to a vibrant, grassroots soul scene. He recently launched the Albina Music Trust in an effort to find a permanent place for what he calls "the ultimate scrapbook of PDX funk." You can read more about the project here. Meanwhile, Smith—an occasional contributor to WW—shared a list of five of the most intriguing groups he's managed to unearth.

An early tastemaker in Albina's jazz-funk scene, the group provided Grammy-winner Thara Memory a first crack at arranging music for a stage band. Memory's compositions were carried out with sophistication by a vibrant cadre of hippie teens who made a name for themselves among local promoters by crashing the Vortex I music festival in Estacada.

As their name suggests, this nine-piece powerhouse served up a buttery-smooth helping of soul food in the mid-1970s. Both technical and infectious, the group featured local funk impresario, Randy Starr, and they were among the first Albina acts to throw down in our city's parks.

Anchored by the four-on-the-floor pounding of drummer Narvy James and bassist Randy Monroe, Transport kept the discos lit, and even wrote an anthem celebrating the Blazers' 1977 championship that remains unreleased.

Founded by Pleasure trumpeter Tony Collins, Lights Out was Albina's answer to the boogie-funk sound sweeping through California in the early 1980s. Hybridizing horn arrangements with synthesizers, the group provided a solid backbone for vocalist Andy Stokes to tear it up on the mic.

With bassist Mike Belcha at the helm, the SMB fused electric R&B with elements of New Wave. Having pressed forth in the heyday of Prince and Rick James, it is a wonder the group's LP never saw the light of day.

SEE IT: The Albina Music Trust will have a booth at the 33rd annual Martin Luther King, Jr. Tribute at Highlands Christian Church, 7600 NE Glisan St., on Monday, Jan. 15. 11 am. See worldartsfoundation.org for more information. 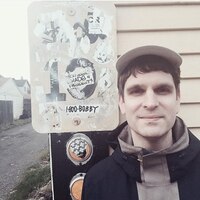 A native to Portland, Bobby Smith is a freelance hoarder with a thing for Northwest jazz, funk and soul music. An elementary school teacher by day, he is a DJ and radio personality by night. He is a fan of the "disco nap" as well as the standing desk, from which he types articles and spins records—often at the same time.