That question, bellowed out by a tipsy teenaged girl to her circle of scantily clad friends at rapper Aminé's "homecoming" show, was one most likely muttered by quite a few people in attendance last night at Roseland. It came after the Benson High grad quipped to the sold-out crowd, "Y'all motherfuckers know where I'm from, right?" which received both cheers and some scratching of heads.

The confusion is somewhat understandable. Most were there to hear "Caroline," the endlessly catchy tune that's amassed over 64 million plays on YouTube. Its sound, built on bouncy synth chords and 808 snare drums, fits in nicely with the upbeat hip-hop being created right now by next-generation MCs like Chance the Rapper, who preach having fun as much as they do having awareness. It also doesn't sound like anything that's ever come out of Portland—a straight-up hit that is taking Aminé to levels no other rapper from the local scene has ever reached before.

The significance of this wasn't entirely lost on the crowd. Some of us who've followed Portland hip-hop for years were there in hopes of witnessing a rapper finally break out of the bubble that's seemingly trapped so many talented local artists in the past. We've seen guys sign to major labels before—Cool Nutz and producer Bosko dropped a collaborative album with South Central MC Poppa LQ on Universal back in '99—and watched groups like Lifesavas earn a name in the independent realm, but we've never experienced a homegrown MC with seemingly so much star potential. Personally, it wasn't Aminé's stellar performance on The Tonight Show or even his recent signing to Universal that convinced me of this. instead, it was a party in New York City, where a group of girls played "Caroline" three times straight while belting out every single word of it. As much as I hate to admit it, never in my wildest dreams did I imagine a Portland rapper would become the soundtrack to a party in Brooklyn.

For the most part, Aminé confirmed our inklings of his potential last night, though questions remain as to whether he yet has the material to fulfill it. Onstage, he was both commanding and personable, constantly cracking jokes at his and the crowd's expense ("I'm so weird," he admitted at one point). Because of the homecoming nature of the show, he also played up the Portland factor big time, dropping punchlines involving Blazer guards Brandon Roy and Damian Lillard, as well as devoting a portion of his set to shouting out his alma mater, Benson, while playfully taking shots at the school's rivals: "I didn't go to Grant 'cause there are too many hoes there," he said. At one point, a large screen on stage displayed images of Aminé as a kid growing up in Portland—another deeply endearing move.

But there were also some moments of confusion. For one, Aminé only played six or seven songs of his own. The rest were either covers (a great one of Frank Ocean's "Novacane" and an admirable rendition of Bob Marley's "Redemption Song") or songs performed by other artists entirely. While it was thrilling to see soulful crooner Leon Bridges and singer Kehlani—who drew maybe the biggest reception of the whole show—make out-of-nowhere appearances, it made you wonder whether he had to lean on more established talent to get through a full set. Other random moments—like when he brought a guy on stage to propose to his girlfriend to an instrumental version of Travis $cott's "Drugs You Should Try"—compounded this notion.

The rough-around-the-edges nature of the show probably should have been expected. Aminé is, after all, new to the national stage, having dropped only two mixtapes in the past, one of which he now disowns. In that regard, he's still finding out what works and what doesn't. I was able to witness his most-recent show in NYC, where he played nearly the same set to a full but much smaller room. Some of the new songs he played then—"Cheesin," a goofy tune about picking up a girl, and "Baba," his follow-up track to "Caroline" released in November—didn't really work. (In fact, he vowed that night that he'd never perform "Cheesin" again after its lackluster response.) When those songs were played last night, however, they were met with much more enthusiasm, creating more questions for the young artist about which direction he wants to steer his sound.

Wherever he decides to take it, it will be built upon the success of "Caroline," which he played mostly in acapella form, with the help of the crowd. I could hardly even see its performance; a wall of cell phones blocked my sightline of the stage, as everyone wanted to tell the world that they were there to witness it live. But the highpoint for me came during one of his other new songs, seemingly titled "I Wanna Flex." During his performance of the song in New York, he announced it was produced by someone "very big"—it sounds like the work of Mike Will Made-It, though he namedrops Metro Boomin' on it. Over hard-hitting production, a fresh take on the "trap" sound du jour, he spits a chorus that includes the line "503 is my home," merging the current sound of hip-hop with hometown pride. It seems as though finally those two worlds are merging.

All photos by Henry Crommet. 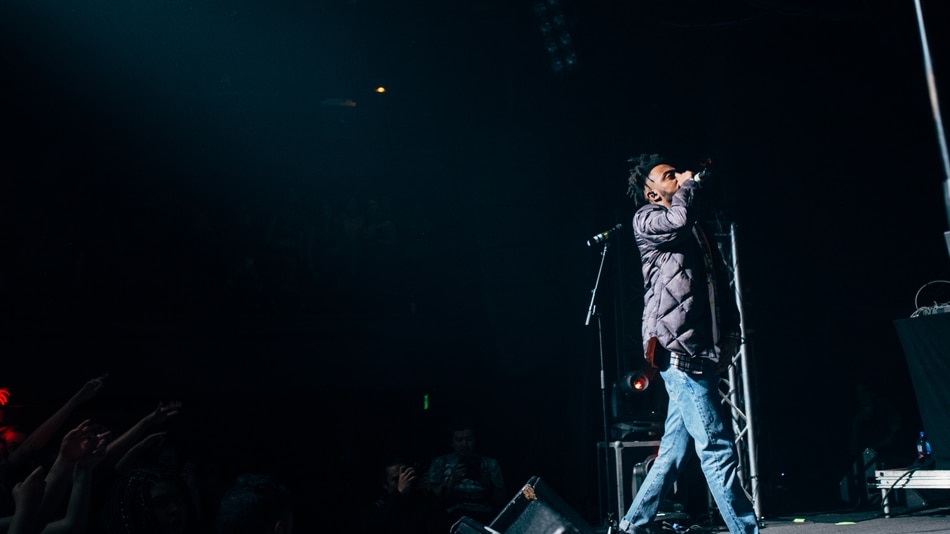 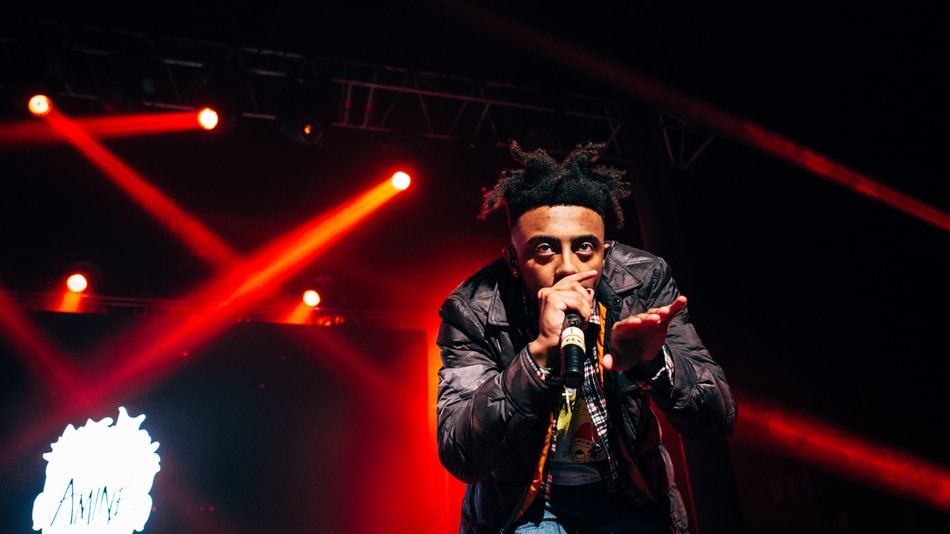 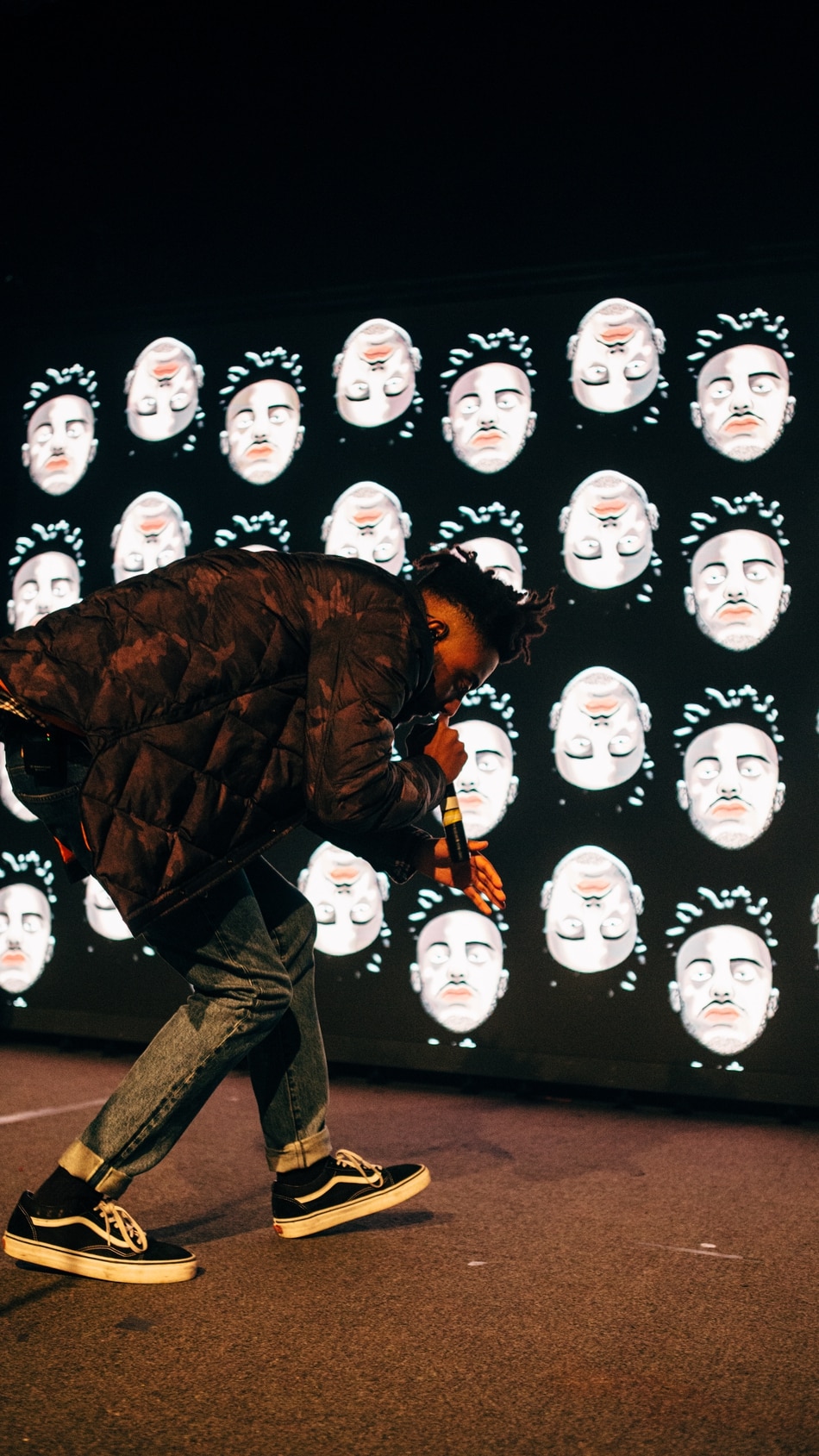 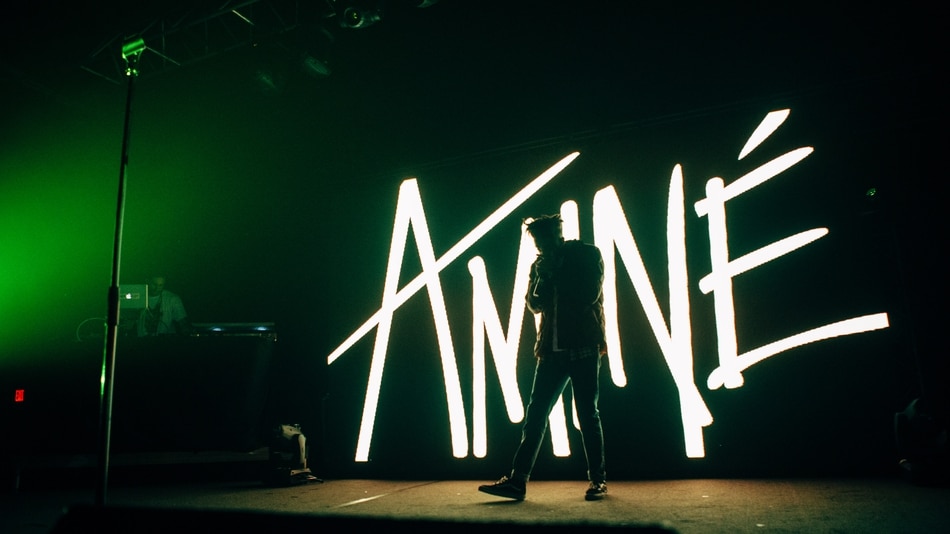 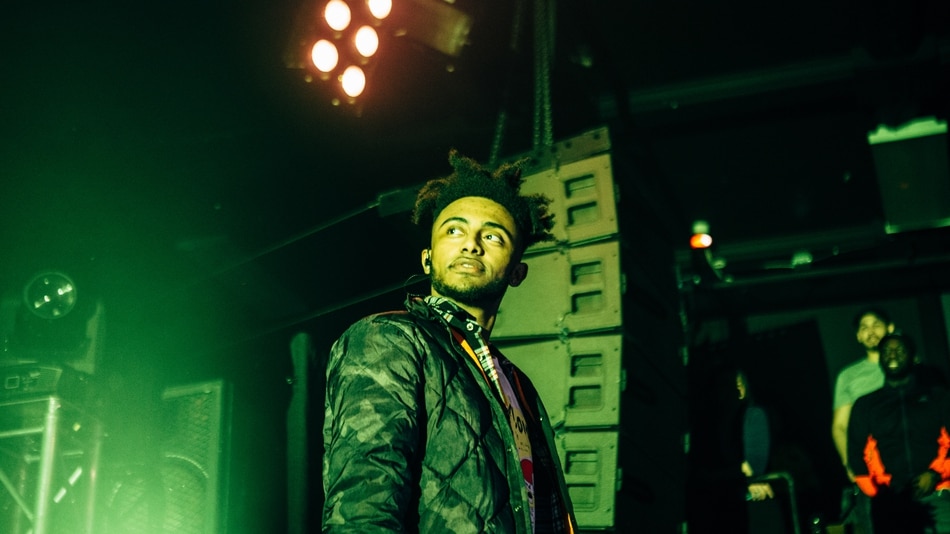 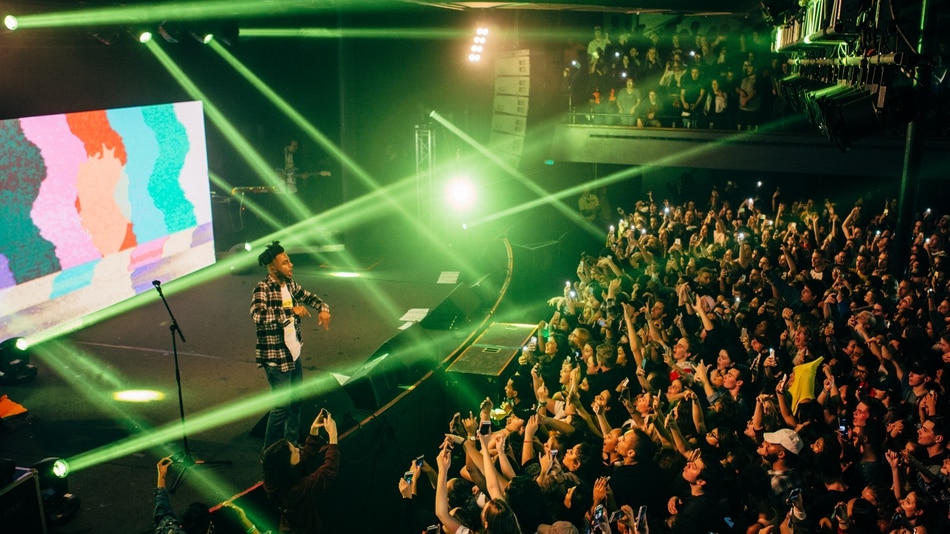 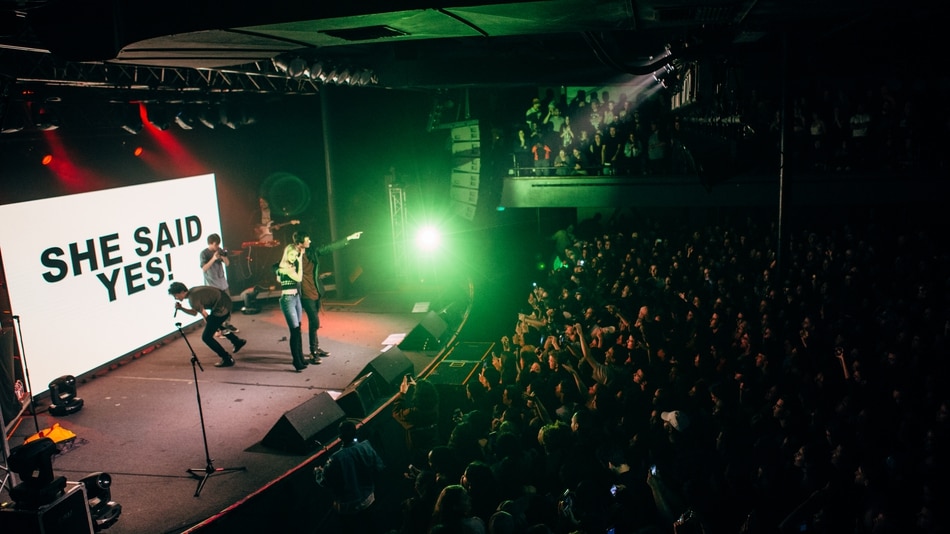 Kehlani making a guest appearance during Aminé’s set.
10 of 11 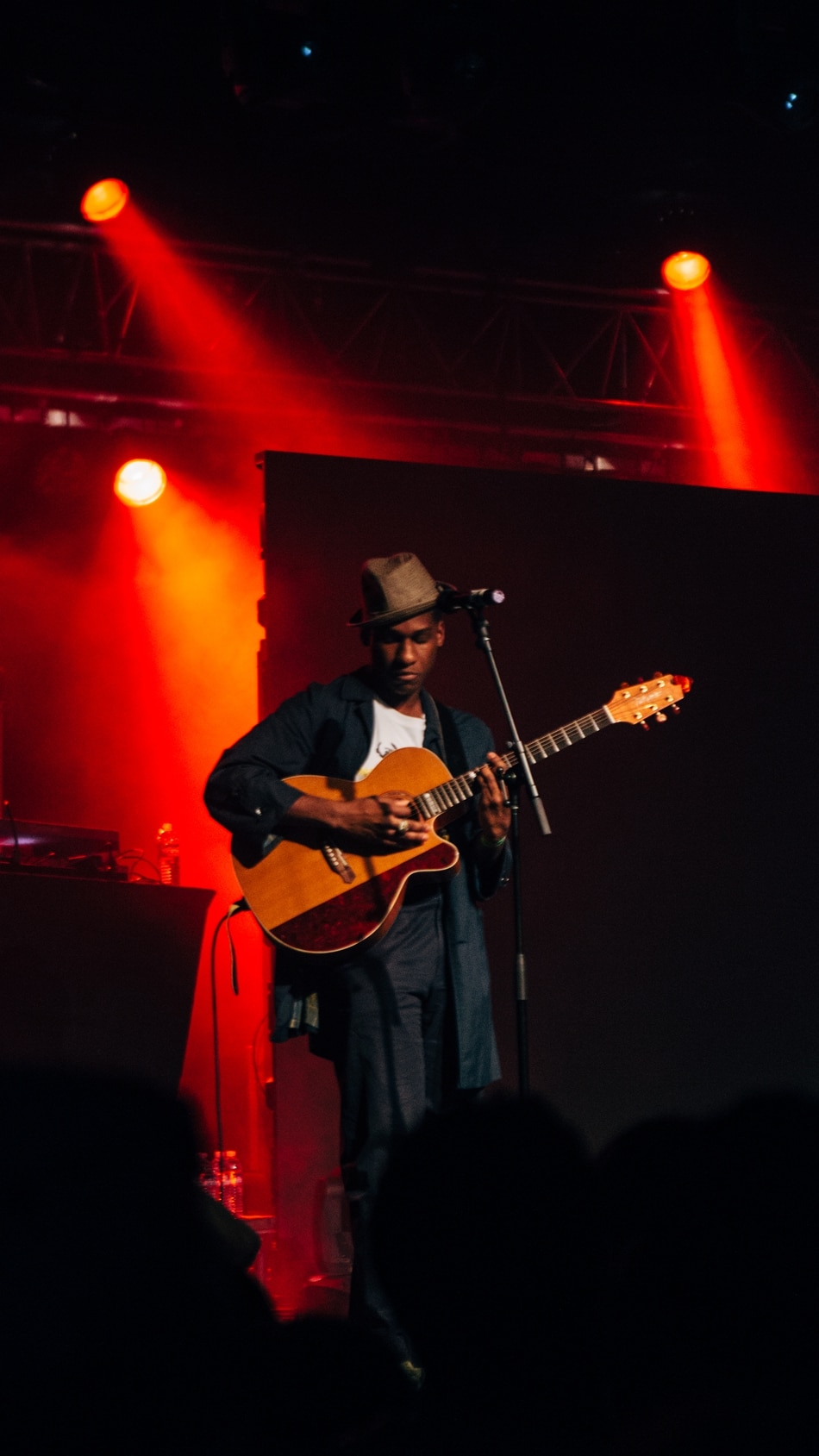 Leon Bridges making a guest appearance during Aminé’s set.
11 of 11 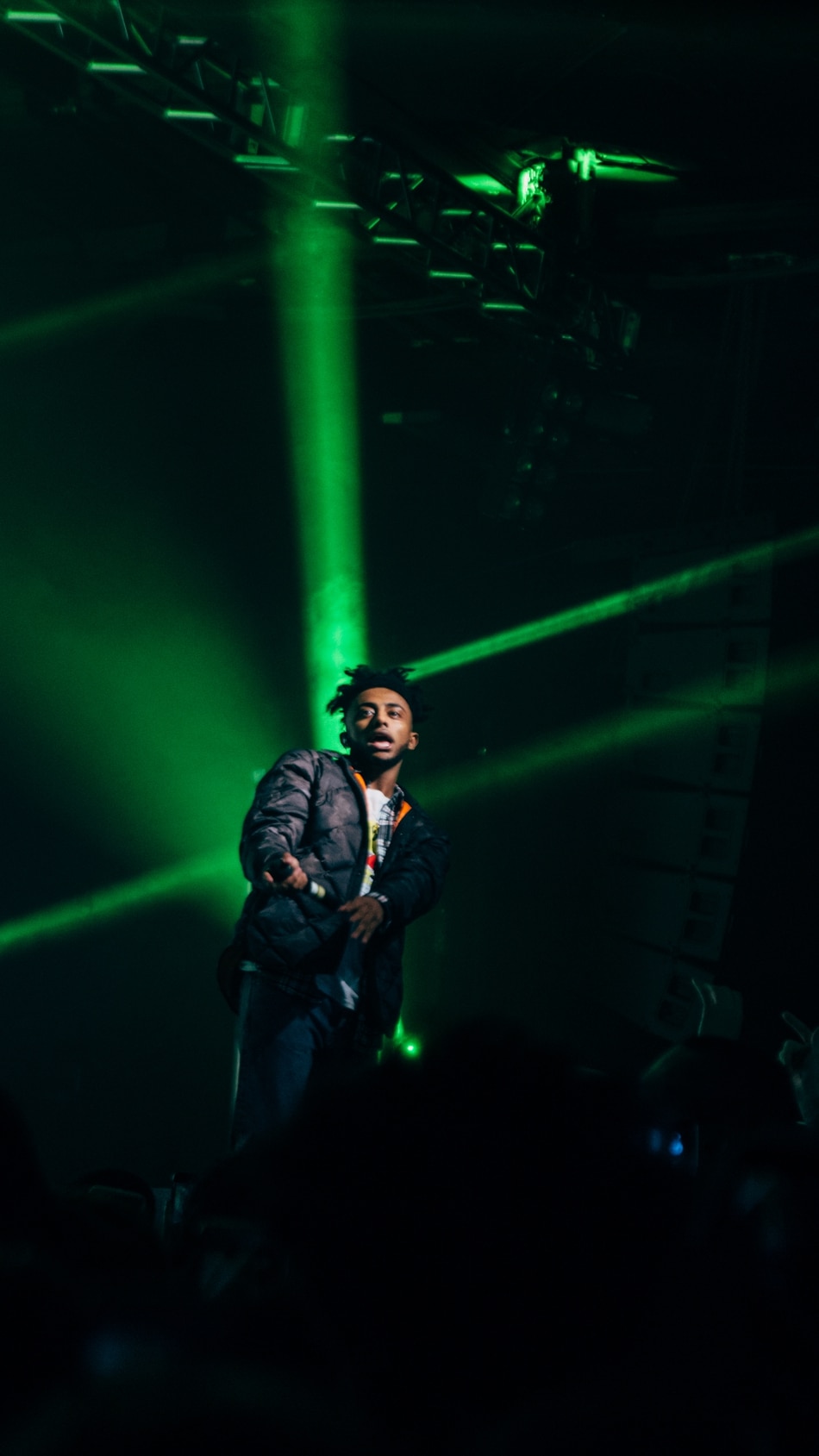 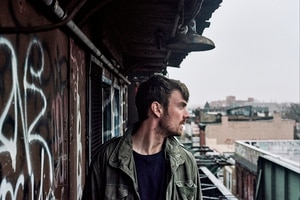 Reed Jackson is a Portland native currently living in New York, where he writes about hip-hop for publications like XXL and Vice. He lives unhealthily and avoids nature—two things born directly out of resentment for his Northwest upbringing.