Where can Portland cyclists with an average income still afford to live?

[Editor's note: Due to a technical glitch, the map on this piece did not print correctly. We regret any confusion. The map's below.]

Portland has long been thought of as a cycling mecca for one big reason: Affordable homes were close enough to work to commute by bike. Housing prices rose by another 6.6 percent last year, and a February project by Governing magazine found the city is gentrifying faster than anywhere else in the nation. Does the promise of an affordable, bikeable Portland still hold up?Consider that the median income for a family in Portland is around $50,000, which financial advisers will tell you means they should not spend more than $315,000 on a house. Also consider that the national average commuting time is 25 minutes each way.

So can you find an affordable house in a place that's about a one-hour round-trip commute to downtown Portland by bike? It's increasingly difficult.

We used a city-provided map of every Portland neighborhood and contacted D. Patrick Lewis of Better Homes and Gardens Real Estate for a list of the median prices of homes sold in each neighborhood. Then we used Google Maps' cycling directions to determine how far each neighborhood was from downtown—specifically Big Pink—in miles and minutes of cycling. (Traffic and the specific location within a neighborhood can cause these times to vary considerably, but this is our best try.)

What we found won't surprise most Portland house-hunters: It's no longer cheap to live close to downtown, even in long-shunned North Portland. Here's what else we found.

After you remove outliers such as Chinatown and Goose Hollow—if you can actually find a livable, single-family house there for under $300,000, we would be happy to buy it from you—the best bet for bikers is probably Foster-Powell. There, houses are selling for about $262,000, and the round-trip commute is 66 minutes. And the neighborhood looks to get even better with an upcoming "road diet" plan for Southeast Foster Road. Starting next year, the city will spend $5.5 million to build bike lanes and remove two of the busy thoroughfare's five car lanes. 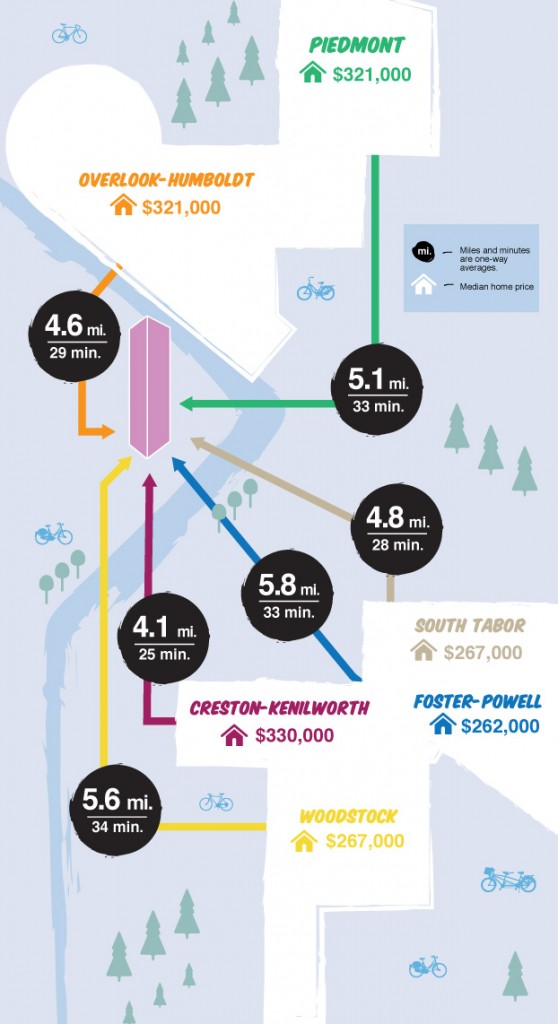 Two other mid-Southeast neighborhoods are close behind: Woodstock and South Tabor. However, South Tabor is the better value for bikers as living there shaves 12 minutes and nearly three miles from your daily commute. It has a better bike score to match: 84 compared to Woodstock's 77.

Creston-Kenilworth—roughly the area south of Powell Boulevard between 28th and 50th avenues—also stood out. Homes there are selling for a median price of $330,000, and the cycling commute is 50 minutes.

North Portland, long known as cheap and close to downtown, isn't so much like that anymore. Vernon boasts housing prices of $370,000. Neighbors in Piedmont, Overlook and Humboldt come in at $50,000 less—putting them on the bubble of affordability, while being only a few minutes closer to downtown than far-cheaper Southeast neighborhoods.

Your best bet for a true bargain? Brentwood-Darlington is an outside contender, with home prices sitting at around $213,000. Right now, it's 81 minutes to downtown along the Springwater Corridor, but the new Orange MAX Line could be a game-changer if you don't feel like making a long ride.

Or you can just wait—and pray—for the Portland housing bubble to pop.

Click here for a searchable chart of Portland neighborhoods!