Last month, Portland Public Schools administrators angered many people by announcing that school choirs could no longer perform at the Grotto's annual Festival of Lights because of its Catholic affiliation. Administrators worried that the school-sanctioned performances would give the appearance that PPS endorsed a particular religion—and make it vulnerable to a lawsuit.

Three School Board members, including Chairman Tom Koehler, fought the ban, arguing the concerns were overblown. But they could not persuade a fourth member of the board to join them to overturn the decision.

Leave it to students and teachers to come up with an innovative solution.

Students from Jackson Middle School and Wilson and Lincoln high schools will perform next month at the Old Church instead. 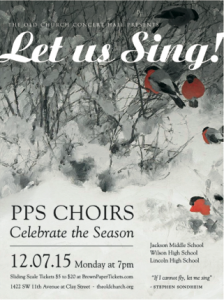 Yeah, yeah, we know what you're saying. The Old Church is not technically a church at all. It's a nonprofit performance space in downtown Portland with no religious imagery or affiliation. But Steve Buel, one of the School Board members who voted unsuccessfully to overturn the ban, is chuckling anyway.

Want to support the students?

And the name of the concert?

Beth Slovic joined Willamette Week as a staff writer in 2006, returning in 2014 after a three-year hiatus. She covers politics, immigration and more.