The court ruled the Slants' First Amendment rights were violated.

Portland band the Slants won big in federal circuit court today, in their challenge to the U.S. Patent and Trademark Office's refusal to trademark their name.

Every prior court decision, through a long series of appeals, has upheld the original decision against the Slants, because of a statute ruling out "scandalous, disparaging or immoral" trademarks.

This court decision marks the first victory for the band. "It's been denial after denial," says Tam. "Three years ago right around this time, Christmas Eve, we got the decision we were too Asian to receive the mark. Our ethnicity provided to the context to make our name disparaging. This is the opposite of that."

The band picked up a number of allies in their fight for the name, from the NAACP to the Washington Redskins, whom Tam calls an "unlikely and unwanted ally."

"It's still important to realize that censorship is not how you solve racist speech," Tam says. "It's about having more nuanced discussions and better speech."

The court ruled that the Slants' First Amendment rights had been violated.

"I've heard it's a pretty huge deal," Tam says of the First Amendment decision. "The statute has been used primarily to disproportionately affect and marginalize minorities, artists and nonprofits trying to appropriate language."

Here's the relevant text of the ruling: 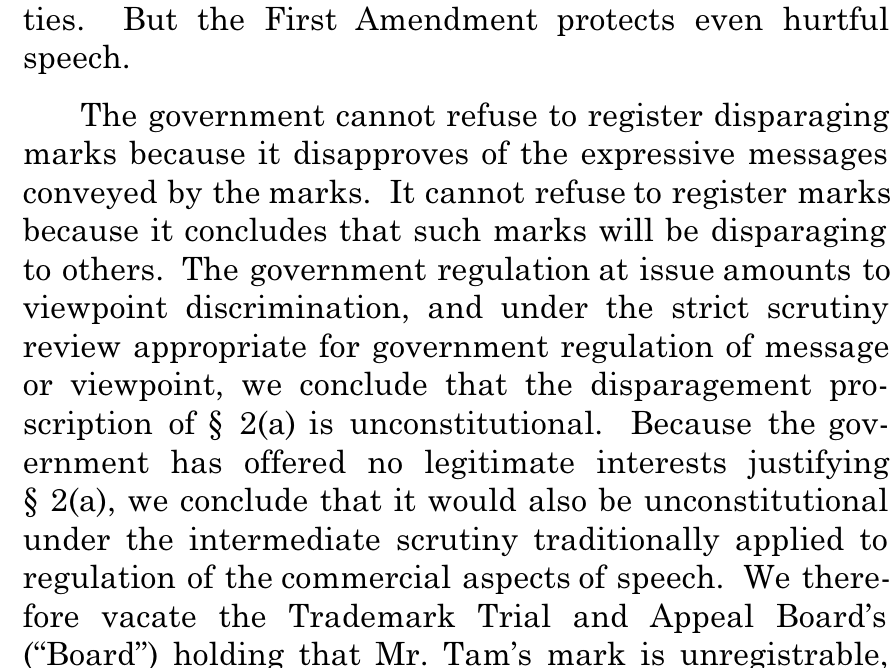 The Slants will play next in Portland at Newcon fest, which takes place Jan. 15-17.