Parking records and calendars show he came to the office just 114 days in 2015 and 122 days the year before. That's just 47 weeks in two years.

Staton and the county commissioners use electronic parking passes to enter and exit the parking garage. Those passes create a record of who was at county headquarters and for how long. WW reviewed those records and calendars for the sheriff and the five commissioners who worked with him from 2014 until now.

Staton, who won his second term as sheriff in 2014 and makes $154,380 a year, was in the county building far less than the commissioners.

County Chairwoman Deborah Kafoury, for instance, was in her office 208 days last year, and Commissioner Diane McKeel was there 179 days. Even Commissioner Jules Bailey, who took six weeks paternity leave, made it to the office 160 days.

"Since his job is to administer the Multnomah County Sheriff's Office, you'd expect him to be in his office," Moore says. "That's where administration takes place."

Unlike rank-and-file Multnomah County employees, the county's elected officials work when they want.

Staton's spokesman, Lt. Steven Alexander, says Staton frequently has training sessions, meetings with partner agencies and other official duties that keep him away from his office. The sheriff's department also runs three jails and an office at Northeast 122nd Avenue and Glisan Street.

"The sheriff's job is 24-7, and he is responsible for a lot of different duties," Alexander says.

Alexander adds that Staton could not drive for a long period in 2015 because he had a cast on his foot. The parking records do show he didn't enter the parking garage in October or November of that year. (Staton's calendar shows he came to the office 19 days in those two months, which is included in the total cited in this story.)

But in 2014, records show Staton only made it to the office 122 days—more than 50 fewer days than the average of the other elected officials in the building. 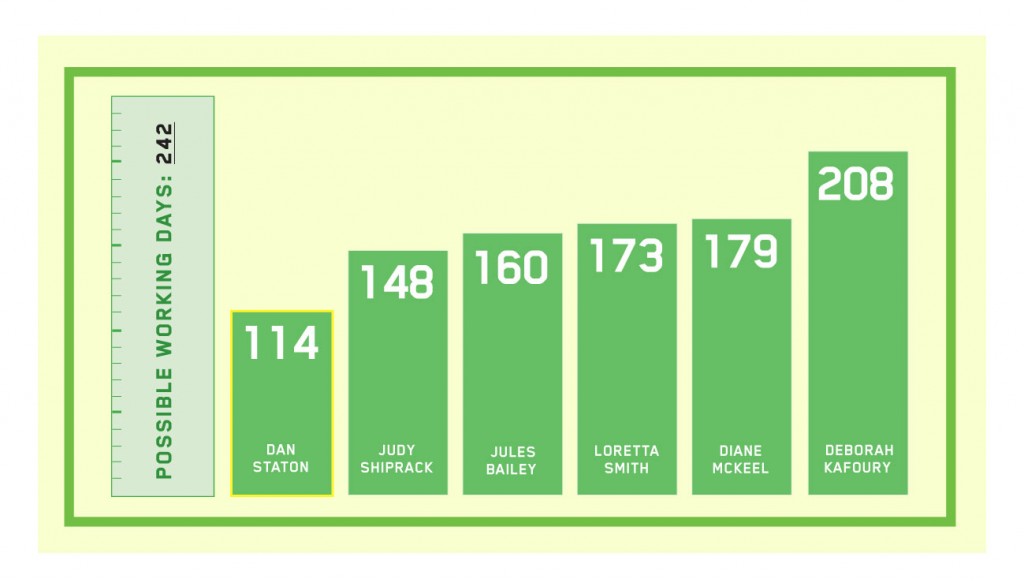 Parking records at the Justice Center, where the main jail is located, show Staton was hardly ever there, either.

Alexander says parking records are not an accurate measure of Staton's commitment to his job.

"The public's work is still getting done, and he's always available," Alexander says.

"The public has every right to expect a high standard of work, engagement and thoughtful responsibility," says Shiprack, who had major knee surgery last year and came to work 148 days.

Staton has been under fire recently. On Jan. 29, Chief Deputy Linda Yankee filed a tort claim notice against Staton. Yankee alleged Staton had harassed her and made a variety of inappropriate comments about other senior county officials.

Last week, Staton agreed to settle Yankee's claims at a cost to his agency of close to $300,000.

Staton now faces an Oregon Department of Justice investigation into his remarks at a Jan. 11 meeting with county union leaders. At that meeting, according to the notes of one of the attendees, Staton said he's "had a full profile" done on 14 volunteer members of a citizen charter review committee considering, among other policies, whether Staton's job should be appointed rather than elected.

On Feb. 11, Attorney General Ellen Rosenblum notified Kafoury, District Attorney Rod Underhill and Staton that her agency is moving forward with the probe.

"A preliminary review has occurred," Rosenblum wrote, "and an investigation is now underway and is being conducted by my criminal justice division."