As the May 17 primary approaches, there's a lot of interest in how Oregon—a likely stronghold for U.S. Sen. Bernie Sanders (D-Vt.)—will allocate its Democratic delegates.

The short answer: 61 of them will be allocated proportionately to the popular vote in each of the state's five congressional districts. Another 13, so-called superdelegates, are more complicated.

Superdelegates are party insiders and elected officials selected before the primary to cast votes at the Democratic National Convention. Their picks don't have to reflect the popular vote.

Of the 13 Oregon superdelegates, six have already committed to former Secretary of State Hillary Clinton. All of them are either members of the congressional delegation or statewide elected officials. U.S. Sen. Jeff Merkley (D-Ore.) is the lone Sanders endorser. Another six remain uncommitted.

Carol Butler, a campaign spokeswoman for Gov. Kate Brown, one Clinton's backers, says Brown is impressed by the passionate support Sanders has generated in Oregon. Butler says Brown is a longtime Clinton supporter but will keep an open mind. "She will enthusiastically endorse whoever gets the nomination," Butler says. 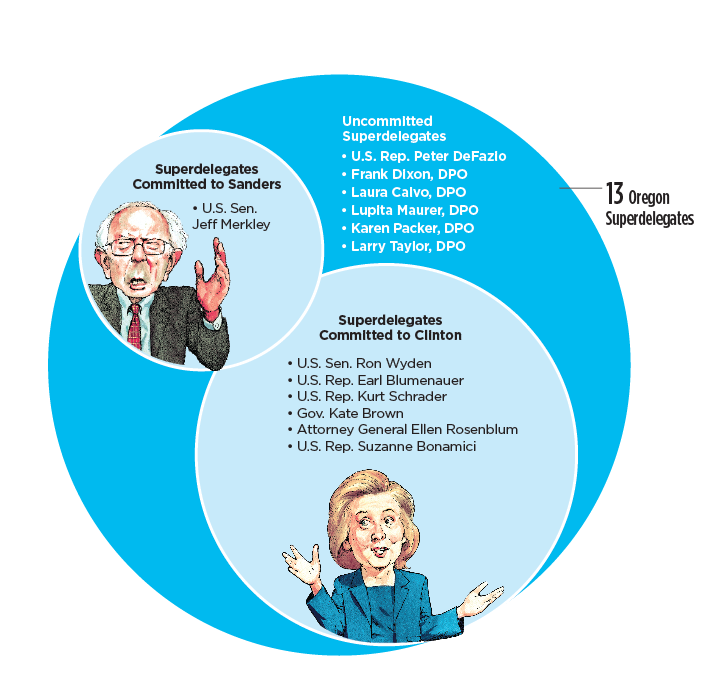