A Jury Trial for an Eviction? Jessie Sponberg Almost Made it Happen

“A jury trial for an eviction would have been very unusual,” a Multnomah County Circuit judge says.

On the campaign trail for Portland mayor, Jessie Sponberg brought theatrics to his quest for more affordable housing and economic security for marginalized communities. He blasted opponents, disrupted candidate forums—and released what was by far the best campaign video of the May primary. (He finished seventh in a field of 15, with 1.68 percent of the vote.)

This week, Sponberg almost succeeded in winning another stage to promote his activism, and in the process he almost achieved what virtually no one else in Multnomah County has done recently—the chance to challenge his eviction from his East Portland home in front of a jury.

Multnomah County Circuit Judge John Wittmayer, who was set to preside over Sponberg's jury trial on June 15, says he's had only one for an eviction in the 20 years he's been on the bench. "A jury trial for an eviction would have been very unusual," he says.

On Wednesday, though, Sponberg's jury trial evaporated. Acting as his own attorney, Sponberg had wanted to challenge the ability of banks and mortgage companies to take possession of previously abandoned homes. He said he planned to call Mayor Charlie Hales and Mayor-elect Ted Wheeler as witnesses. ("I hadn't asked them yet, but I had every intention to," says Sponberg. "I'm sure Ted and Mayor Hales would have testified.")

"I knew when it was time to cut my losses," he says. "The judge doesn't have the authority to give us this house, so the whole charade in the courtroom was really just to escalate the action." 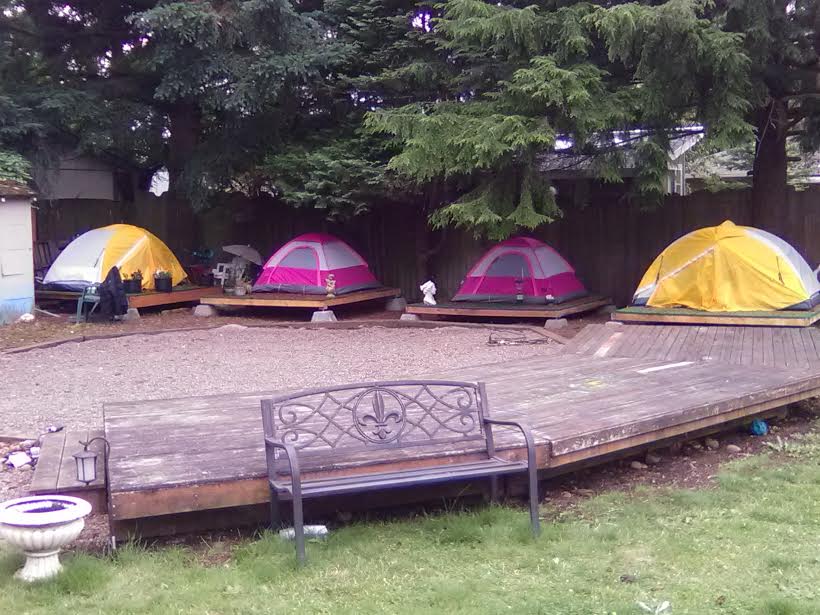 The house sold at auction on the county courthouse steps in May 2015. It then changed hands. On Dec. 15, 2015, Federal National Mortgage Association ordered Sponberg to leave in 30 days. He didn't.

Instead, he transformed the home into what he calls a transitional shelter. He says it's helped around 40 men and women.

"People brought us plants," he says, "and tilled up the garden to make it beautiful."

Among the people living in Sponberg's squat is a woman named Julie, 57, who says she was part of the effort on Mother's Day to create a safe camping spot for women in Lents. "I love it here," she says. "I'm safe. I'm happy. I hear music. I'm doing things like I should be doing, I can sleep at night. It's just peaceful."

Correction: An earlier version of this post incorrectly said the shelter had helped 40 women. It has helped 40 people.