Breaking From Custom, One Small Oregon Farm Pays Strawberry Pickers by the Hour

“It can be done,” says farmer Javier Lara. “We’re an example.”

Add this to the many pressures facing the Oregon strawberry: a growing clamor to stabilize wages for migrant workers whose sweat brings Americans their food.

Unlike a lot of fruits and even other berries, strawberries must be handpicked, which makes labor one of the biggest costs of doing business for farmers.

Javier Lara, 43, is throwing a wrench into the uneasy accord between growers and labor.

Paying strawberry pickers by the hour.

In almost all U.S. operations, strawberry pickers are paid by the pound, as an incentive to harvest as many as possible. Oregon law requires that farmers pay workers at least minimum wage if they fail to meet that threshold at the piece rate, except at very small farms.

If they're fast and the berries are big and plentiful, many strawberry pickers can make more than minimum wage—which is set to rise 50 cents to $9.75 an hour in the Portland area, and 25 cents in the rest of the state, on July 1

"A lot of workers kill themselves picking as much strawberries as they can in a day so they can make up their wages because they haven't worked in months," says Ramon Ramirez, co-founder of Pineros y Campesinos Unidos del Noroeste, the union for Northwest tree-planters and farmworkers. (It is often referred to as PCUN.) "It's the first crop, so people are anxious to get to work."

Standing in one of his fields—a 2-acre organic strawberry patch in Molalla, where the lack of herbicides has permitted towers of Canadian thistle weeds over some berry bushes—Lara is wearing a red- and blue-striped sweatshirt, jeans and a broad smile on a recent June morning, even though it's steadily raining. 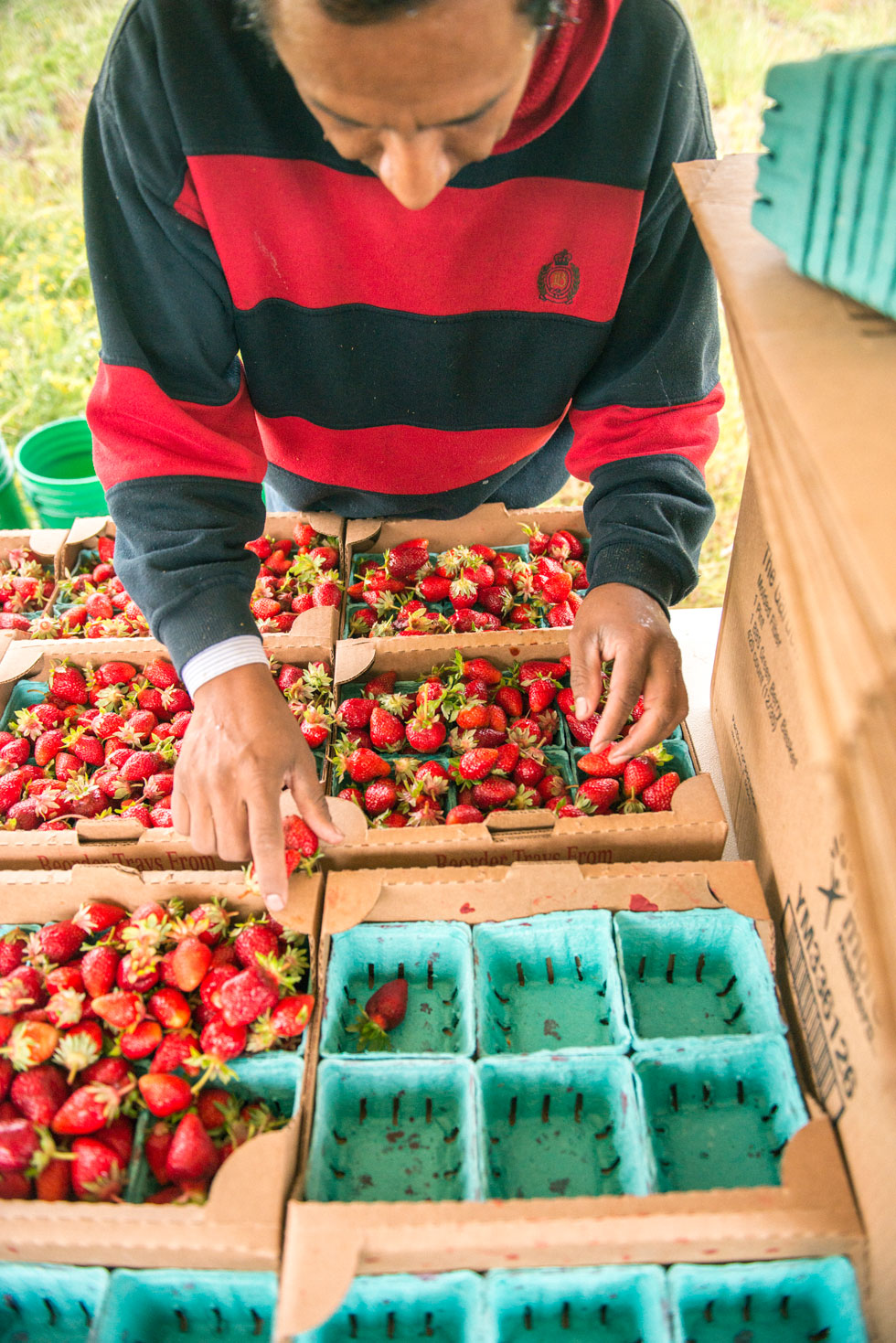 Born in Guerrero, Mexico, Lara was a migrant farmworker for many years, arriving as an undocumented immigrant to the United States in 1989, when he was about 16. It was grape season in California, and he was picking them for raisins. "I had no idea what I was getting myself into," he says.

He remembers the aches. He also remembers farmers' indifference. "They always saw us as just another item on the farm," he says.

Lara eventually married a U.S. citizen. He graduated from Oregon State University in 2009 with a degree in philosophy and ethnic studies. He considers what he's doing more than a job—it's self-empowerment, and he hopes it spreads.

"This is a statement, what we're doing," he says. "We're more than Mexicans."

That doesn't automatically mean they're making more money, but it divorces their pay from the speed of their picking.

At Unger Farms in Cornelius, workers earn between 60 and 80 cents per pound, depending on the ease of picking—but they can also make more than $13 an hour. The slowest picker harvests between 20 and 25 pounds per hour—or $12 to $15 per hour when the picking is good, says farmer Will Unger.

(Pickers who harvest strawberries for the processed market—the largest share of Oregon strawberries—make less per pound, because those berries are worth less.)

A farm like Lara's—which he calls Anahuac Produce, using an indigenous word for "land of the people"—accounts for a tiny fraction of Oregon's total strawberry production. It hopes to sell 2,000 boxes in 2016, through farmers markets and by direct sales to union supporters in Portland and Salem. By comparison, Unger Farms expects to sell 30,000 to 40,000 boxes of Hood strawberries this season.

And that's just an infinitesimal fraction of the California strawberry market.

For Octavio Salvadór, a worker at Lara's farm, none of that matters. Salvadór, 19, started picking strawberries alongside his parents when he was 9.

He arrived with his family from Mexico without documents but now has a work permit under President Obama's program for immigrants who arrived as children and graduated from American high schools. (Called Deferred Action for Childhood Arrivals, the program was mostly untouched by last week's U.S. Supreme Court decision blocking Obama's immigration plan.)

What matters to Salvadór is more than money.

"I've worked for other companies that don't give you time to rest," he says. "Here, no one's telling us to hurry up. You can work at the rhythm you want."