Not everybody is happy to see Portland joining the roster of cities with a bike-share program.

WW has received at least five calls and letters of complaint about bike share over the past three days, most of them from homeowners who wish the city had asked their permission before installing bike racks near their houses.

But how do you protest the perfectly legal installation of bright orange BikeTown racks in the public right-of-way?

With a bright orange felt-tip pen.

Disgruntled residents in Southeast Portland's Sunnyside neighborhood are posting signs expressing their discontent with the BikeTown rack installed on their street earlier this week.

The gripes are posted on at least two handmade flyers taped to signposts near the Southeast Taylor Street rack near Cesar Chavez Boulevard. The complaints range from the reduction of parking spaces on their street to Nike's "branding of our city."

Both were posted to Twitter by eagle-eyed photographers this morning. 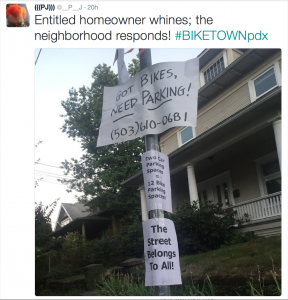 The signs illustrate the view held by some Portland residents that the Nike-sponsored bike share program, which is launching on July 19, was approved by the Portland Bureau of Transportation without sufficient public outreach or approval.

Tony Jordan, president of the Sunnyside Neighborhood Association, photographed one of the signs this morning. He's not impressed by the argument.

"It's like a bioswale or a bus stop," he said. "We got the same kind of notice that we would for any other infrastructure of this nature."

While he says PBOT could have saved itself some headaches by doing more intensive outreach—such as speaking about the program at neighborhood association meetings—he says that plenty of public comment went into the program before the bike rack locations were decided.

Related: No, you cannot lock your personal bicycle to the BikeTown racks.

Jordan, who plans to use BikeTown once it launches, thinks that plenty of people are excited for the program. Opposing flyers have been posted underneath the originals, including one that says "The Street Belongs to All!"

"I think this is probably going to be an amenity that some people will be happy to have in front of their residence," Jordan says.